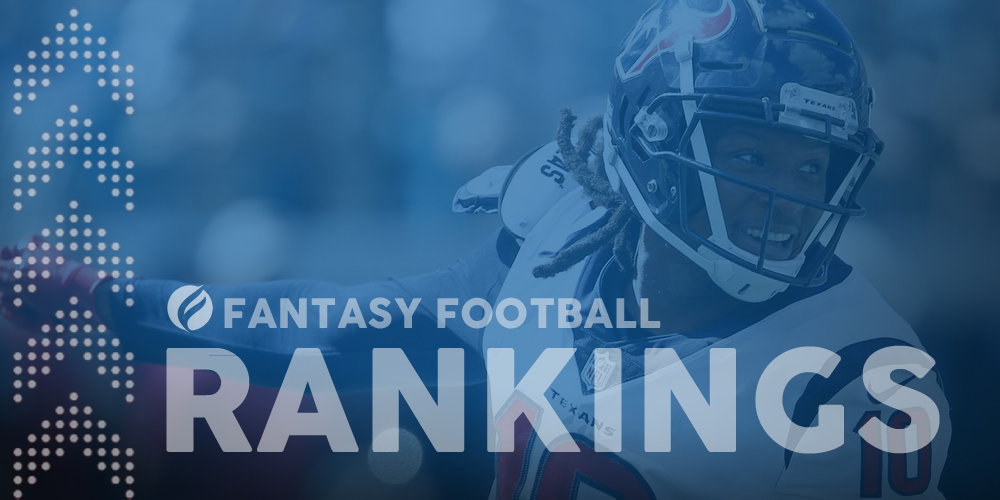 This article will showcase the FantasyData staff's Week 14 Fantasy Football Rankings along with commentary on players I'm higher on or lower on in my own personal rankings. The advanced metrics and other resources available at FantasyData are invaluable when studying results in preparation for the upcoming week's slate of NFL games. Let's dive in!

Allen's averaging 23.7 fantasy points per game this season. He and the entire Bills offense continue to rise to the occasion. The matchup against the Ravens in Week 14 is far from ideal. Baltimore's defense has allowed an average of 11.14 fantasy points per game to top quarterback scorers over its last five. The Bills are clicking offensively due to their heavy usage of 11 personnel over the last three games. Allen can be viewed as a low-end QB1 against the Ravens.

Mattison can be viewed as an RB3 with upside this week. He's averaging 0.62 fantasy points per opportunity and ranks fourth among runnings back with 1.86 yards created per attempt. The Vikings have done an excellent job of managing Dalvin Cook's workload all season in order for him to be healthy in the postseason. The Vikings are heavy favorites against the Lions this week. It would not be surprising to see Mattison lead the Vikings backfield in touches in Week 14.

Godwin has the potential as the WR1 this week against the Colts defense. Indianapolis' defense has allowed an average of 36.3 PPR fantasy points per game to wide receivers over its last five with positive receiving fantasy points over expectation. It will be difficult for the Colts defense to contain both he and Mike Evans. Godwin's ability to extend plays is what will propel him to a bigger fantasy day over Evans.

Here is what I wrote about Ridley in my Outside the Box column at the Athletic:

Ridley caught eight of 10 targets for 91 yards against the Saints last week. With Julio Jones out, he went toe to toe with New Orleans cornerback Marshon Lattimore, and a high percentage of Ridley’s receiving yards came in the fourth quarter. He’s averaged 10.7 targets, 7.3 receptions, 106.3 receiving yards, and 0.7 touchdowns per game over the last three weeks. Defenders are providing Ridley an average cushion of 5.19 yards on each route run. This ranks second among wide receivers. Ridley is also doing an excellent job of separating from defenders. He’s averaging 1.81 yards of separation per target, which is tied for 14th among wide receivers (with Odell Beckham). Ridley has averaged 2.3 receiving fantasy points per game more than expected this season. Ridley can be viewed as a low-end WR1 against the Panthers, whether Julio Jones is active or inactive. Carolina’s defense has allowed an average of 8.2 targets, 6.4 receptions, 99 receiving yards, 0.4 touchdowns, and 18.7 PPR fantasy points per game to top wide receiver scorers over its last five. This includes a game from Ridley back in Week 11 where he caught all eight of his targets for 143 yards and a touchdown.

Samuels is averaging 2.05 yards of separation per target, which ranks fifth among wide receivers. He's a WR3 as the 49ers travel to the Superdome to face the Saints. New Orleans' defense has allowed an average of 36.2 PPR fantasy points per game to wide receivers over its last five. Emmanuel Sanders will also be battling against Saints cornerback Marshon Lattimore.

Cousins can be viewed as a low-end QB1 against the Lions this week. His upside is limited by the matchup. The Vikings are heavy favorites against a Lions team led by third-string quarterback David Blough. Minnesota will likely have positive game flow and lean heavily on the running game with Dalvin Cook and Alexander Mattison.

Darnold's in an excellent position to bounce back against the Dolphins this week after last week's disastrous game against the Bengals. After three excellent games, the second-year quarterback let his fantasy general managers down. The Jets totaled 62 yards against the Bengals’ NFL-worst rush defense in Week 13. It would be prudent for them to get the running game going with Le'Veon Bell against a Dolphins defense that has allowed 143.5 yards per game.

Here is what I wrote about Lockett in my Start 'Em Sit 'Em column here at FantasyData:

Lockett will be difficult to trust after his last three games. He accumulated nine targets and 64 receiving yards. Lockett will also face Rams cornerback Jalen Ramsey this week. He's made a huge difference for Los Angeles since coming over in a midseason trade. Ramsey has excellent man coverage ability which has allowed the Rams to be more aggressive on defense. Lockett is more of a high-end WR3 in Week 14.

McLaurin's fantasy value plummeted once Jay Gruden was fired and replaced with interim head coach Bill Callahan. He hasn't scored a touchdown in six games and a season-low in receiving yards last week. McLaurin will be difficult to trust against the Packers secondary in Week 14.

Duke Johnson set a season-high in touches last week against the Patriots and had a receiving touchdown. This trend will continue against the Broncos in Week 14. Johnson is a mismatch nightmare for defenses. The Broncos defense gave up a high number of receptions and receiving yards to running backs over its last five games. Austin Ekeler had four receptions for 51 yards last week. If you are forced to lean on the Texans backfield this week then Johnson is the one to start.

You'll find my Week 14 rankings below. Do you agree or disagree with some of the analysis? What about how the players below are ranked? Reach out to me on Twitter (@EricNMoody) and let me know. Thanks for reading and don't forget to sign up for FantasyData Premium which will provide you access to our advanced metrics and other resources.