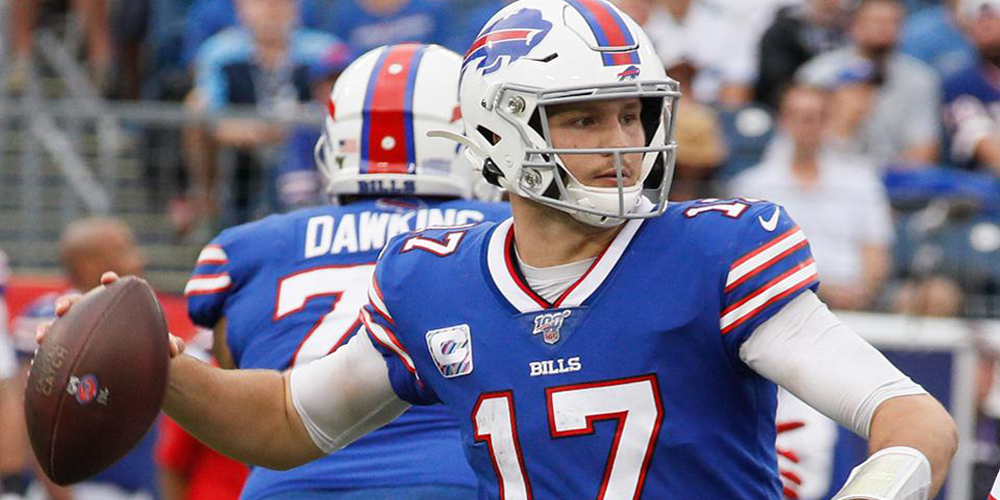 The 4-1 Buffalo Bills take their high-octane passing attack on the road to face the Tennessee Titans in this week's Monday Night Football matchup. The Bills are six-point road favorites and the over/under is set at 53.5.

For this game, you want a big piece of Buffalo's offense and Allen is the way to go. The Bills spread the ball around to a number of different pass catchers and they hardly attempt to run the ball. When they do run, it often is Allen calling his own number. Derrick Henry would be the other option here, but Allen offers safe volume with immense rushing potential on top of that. FantasyData projects Allen for 38.34 points tonight, so feel good about locking him into your captain spot.

Henry is expensive but he is the best option when it comes to the Titans offense. It's not a great matchup against Buffalo's defense, but Henry is being fed carries at a very high rate this season. He has at least 28 carries in each of the past five games and is slowly becoming more involved in the passing game as well. He has two games of three rushing touchdowns so far this season and the Titans feed him the ball regardless of game script. FantasyData projects the bruising running back to score 22.99 points which makes him a good, safe play with high upside.

Sanders is putting up great numbers so far in his debut season with Buffalo. After two games with single-digit outputs, Sanders is on fire his last three games. His target share isn't huge (he does have at least five in each game), but he is getting targeted downfield and making the most of his opportunities. Pairing Sanders with Allen is a good way to go.

Knox is having a breakout season for the Bills. His last three games have been 14.9, 20.7, and 23.7 points. He is emerging as a red-zone threat but is also flashing big playability. He has scored in each of his last four games (five touchdowns total in that span). He is another attractive option in Buffalo's high-volume passing game.

Jones appears poised to return to the field this week after a two-game absence. He was seeing a healthy amount of targets from Ryan Tannehill before his injury. Now A.J. Brown is questionable with an illness, so Jones could be in line for a busy night. The Titans are not deep at the receiver position even with Brown and Jones fully healthy. Look for Jones to command a large volume of targets as he returns to the field. There is always the risk that Jones aggravates his hamstring injury, but his potential is great in this game and his price tag isn't as high as it normally would be.

The Titans receiving crew after Brown and Jones is a muddled mess to say the least. But when hunting for value on this slate, Westbrook-Ikhine might be worth a dart throw. He missed last week with a hamstring injury but he could return to a decent role, especially if Brown is not able to go. He does have a touchdown catch in Week 3 before his injury and a score on Monday night would more than pay off his salary.