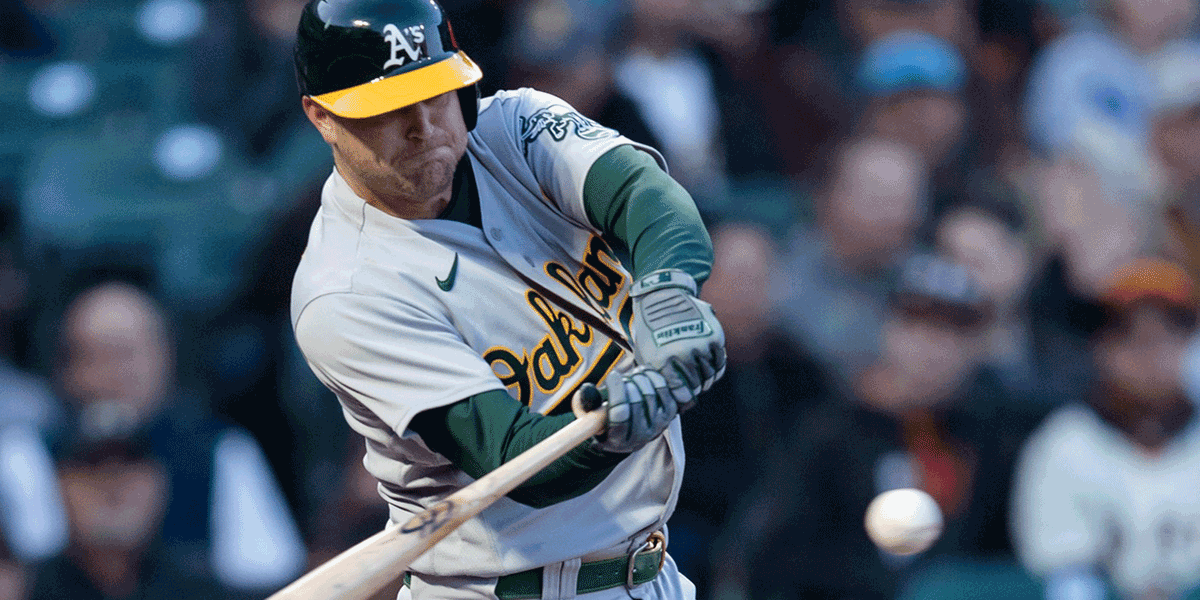 Last week, we looked at two hot hitters, plus one surging starting pitcher that started slow. We also referenced the results via barrels dropped versus previous seasons, which aligned with the offensive dip across the league. The barrel results look similar, with an increase in wOBA, SLG, and the expected stats, given an additional week of data.

It might be a narrative or an uber small May sample, but the offensive pace remains positive through May 10. Maybe it's the weather, though several games got postponed over the weekend. Or it could be hitters receiving more repetitions after the delayed spring training and season.

Home runs and runs per plate appearance improved since April, but they're lower than 2021 overall. It's not much, but the slugging percentage, wOBA, and expected wOBA and SLG provide optimism over the past week in May.

Neuse is off to a hot start with two home runs and four stolen bases with a .290 batting average. With an NFBC ADP past pick 740, Neuse landed as a waiver wire pickup in 15-team leagues. The .406 BABIP has boosted the batting average with a 6.3% walk rate and 28.6% strikeout rate. Although it's a high BABIP, Neuse boasted a BABIP north of .357 in those two peak seasons at Triple-A in 2019 and 2021.

Neuse rocks a healthy 23.9% LD%, helping the BABIP, but the 59.2% GB% remains a concern. Interestingly, Neuse doesn't pull the ball with a 19.7% Pull%, plus the batted balls going to centerfield and the opposite field around 35-40% each. It's positive that he doesn't pull the ball a ton, meaning an attempt to use the entire field of play. 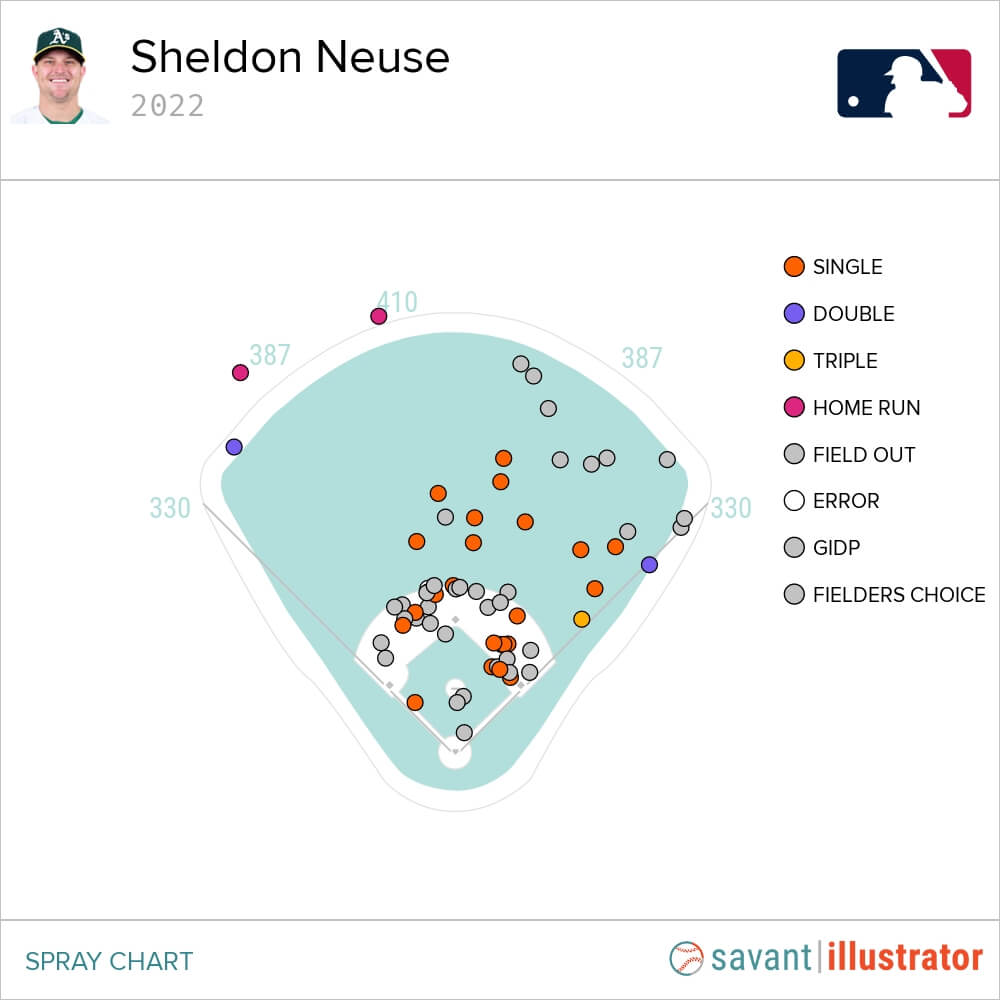 Although it's a small sample of 127 plate appearances in the majors (2019 and 2021), Neuse improved, especially with contact rates. Neuse's 87.1% Z-Contact% sits near the league averages, yet the overall contact rate remains below average.

The Power Isn't That Neuse 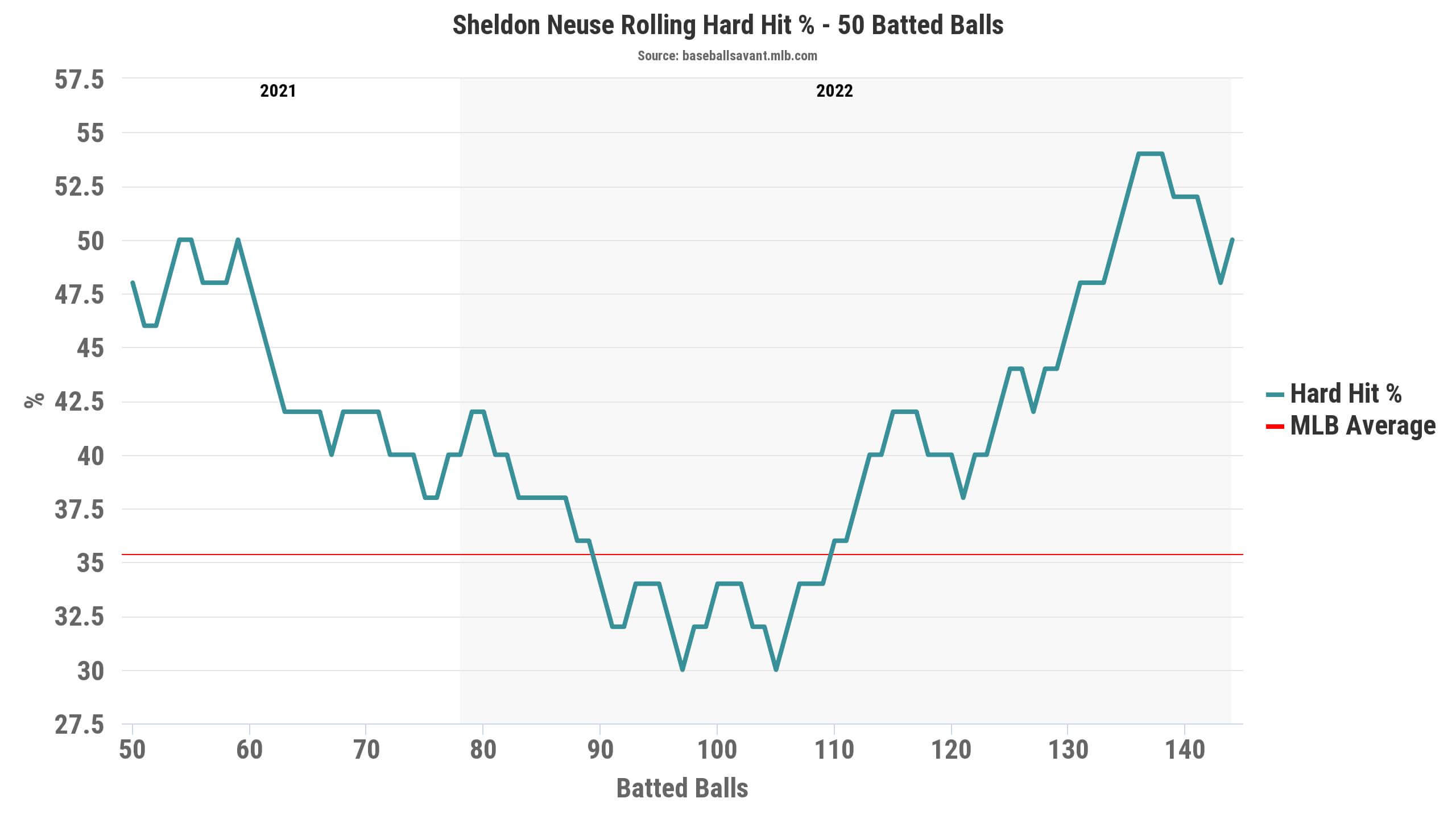 Meanwhile, Neuse does hit the ball hard, as evidenced by the 45.1% hard-hit rate (72nd-percentile). Given the high ground ball rate, it's unsurprising to see the low barrel rates. Although Neuse consistently hits the ball hard, we would like him to trade GB for FB.

Unfortunately, Neuse plays on an Oakland team that ranks last with a 75 wRC+. The same trend applies in wOBA, with the Athletics ranking last with a .260 wOBA. Thankfully, Neuse bats towards the top of the lineup in the two-hole in nearly 18 straight games since April 18. When we add in the positional flexibility, it increases Neuse's value in 15-team rotisserie leagues. The BAT X rest of season projections have Neuse with eight home runs, four stolen bases, and a .225 batting average. They're projecting Neuse's BABIP and batting average to regress, plus minimal counting stats to nearly compile double-digit home runs and steals.

The journeyman and utility player, Brandon Drury, has eaten up playing time with the Reds, and he's heating up. Drury started May with a hit in seven out of eight games played. He averaged 475 plate appearances in three seasons, yet only 70.5 in four other seasons, not including 2022. Let's look under the hood to see if it's merely a hot streak or legitimate changes.

The most notable profile change involves Drury's flyball rate, which increased to 43.5%, up from a career rate of 31.7%. Meanwhile, Drury rocks a high 48.4% pull rate versus a career 44.5% Pull%. Pulling flyballs aligns with the early power spike, evidenced by the 17.7% Barrel% (95th-percentile) and 11.7% Barrel/PA - both would be career bests. 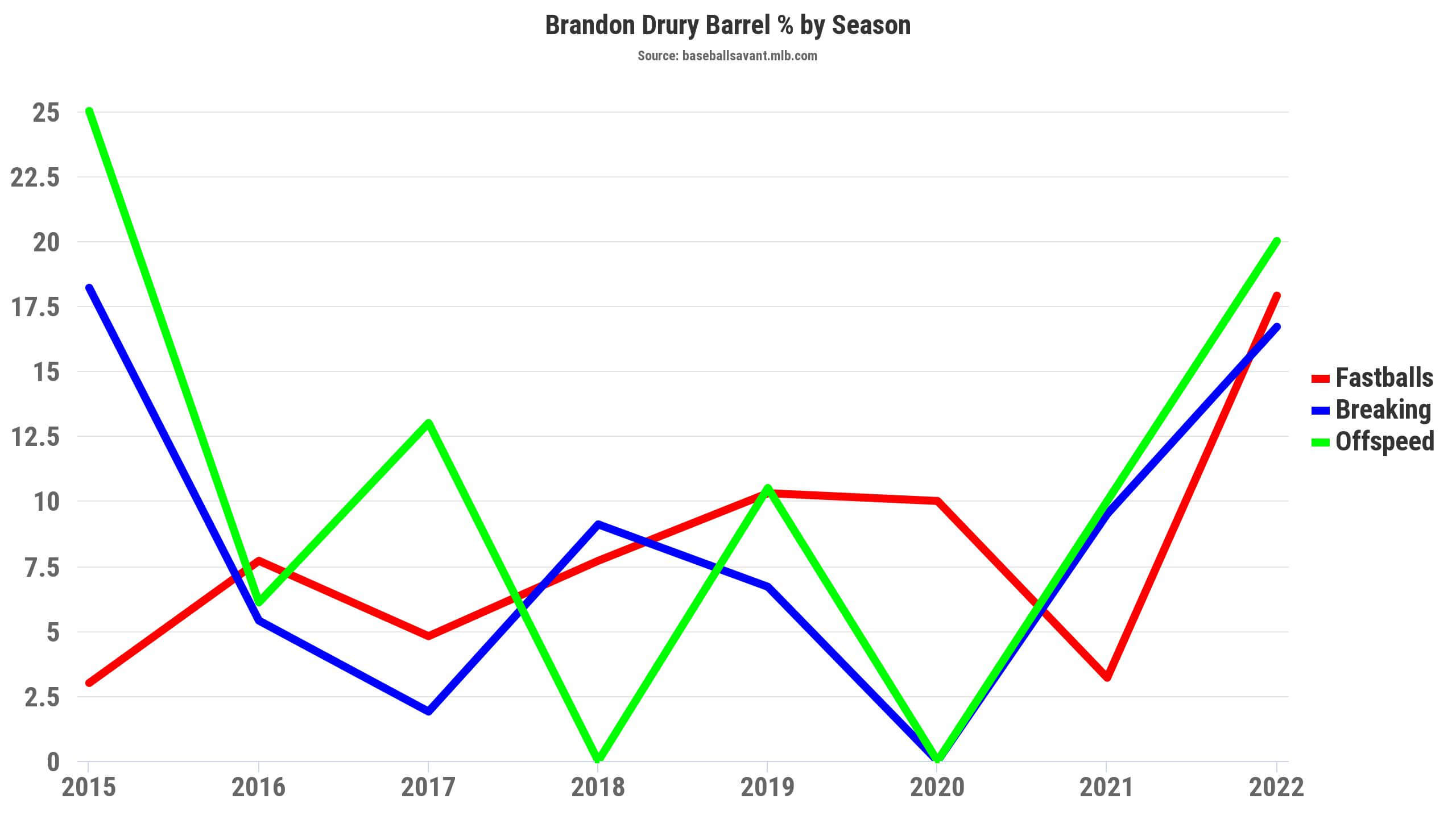 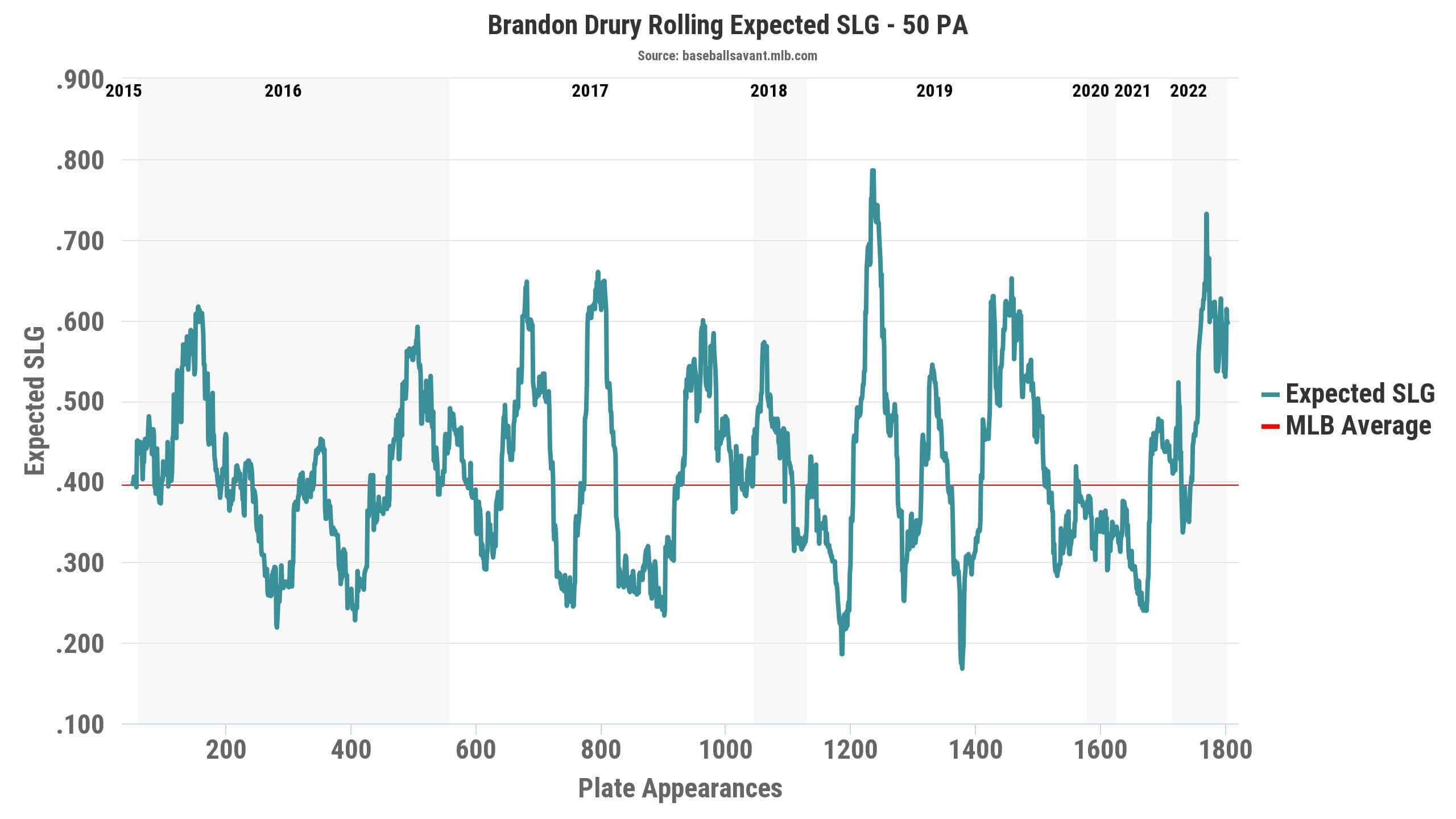 We witnessed hot streaks from Drury before, with the rolling expected slugging percentage peaks in 2017 and 2019. So we'll see if that sticks around, though history would indicate probably not over the long haul. 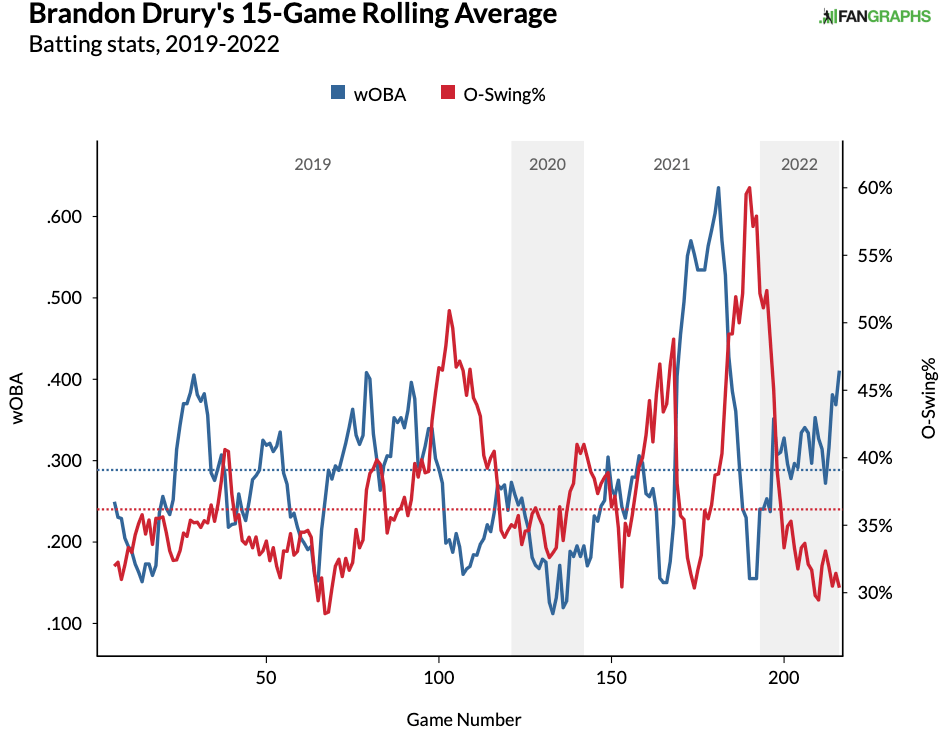 We witnessed hot streaks from Drury before, with the rolling expected slugging percentage peaks in 2017 and 2019. So we'll see if that sticks around, though history indicates probably not over the long haul. Although it's early, Drury is chasing less with a 30.4% O-Swing%, yet making similar amounts of contact, evidenced by the 89.9% Z-Contact% and 81.1% Contact%. Versus Drury's career norms, it's not far off from the 33.3% O-Swing%, 87.9% Z-Contact%, and 77.4% Contact%. With Drury's lowered chase rate, his swinging strike went down to 8.2% versus a career-rate of 10.4%. 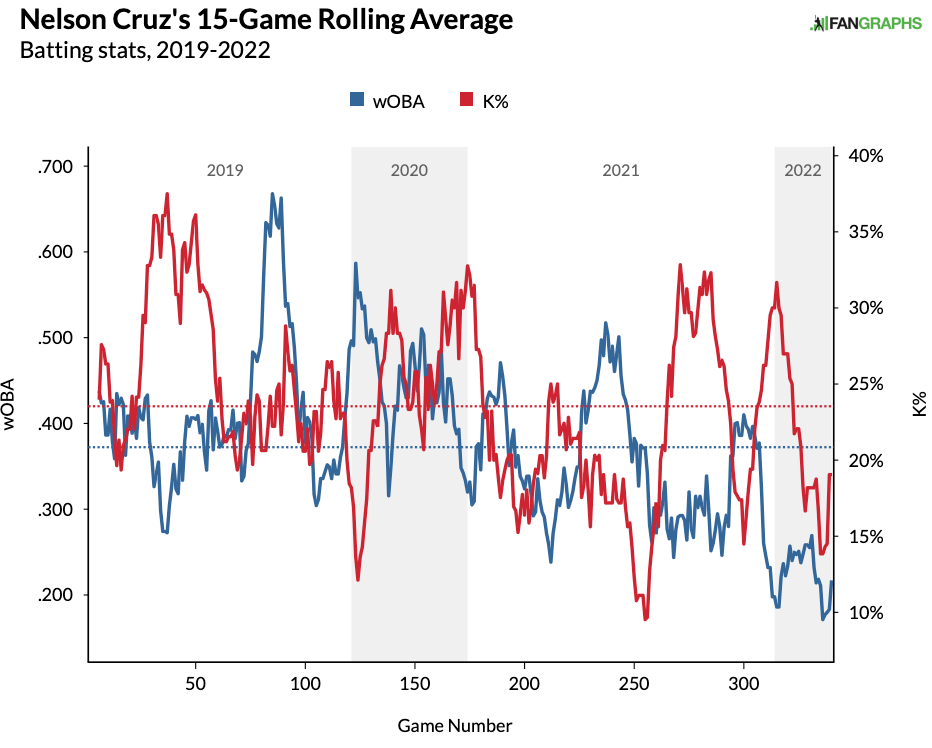 However, we know the Rays' home park typically rates in the bottom of the league in offensive categories per EV Analytics. With the Rays, Cruz's strikeout rate increased to 26.5%, up from 18.2% in 2021. Meanwhile, the walk rate dropped from 10.1% to 6.7%. Willy Adames notably mentioned struggling with hitting in Tampa Bay, and maybe Cruz suffered the same issues.

After surprisingly signing with the rebuilding Nationals, Cruz is off to a cold and slow start with four home runs, a .174 batting average, and .550 OPS. Cruz crushed a home run off Tylor Megill with a 110.8 mph exit velocity - the second hardest-hit ball in Wednesday's game. Thankfully, the early 2022 strikeout rate sits at 19.8%, with a 10.7% walk rate, possibly indicating the plate discipline hasn't fallen off. Heading into Thursday, Cruz has a five-game hit streak. 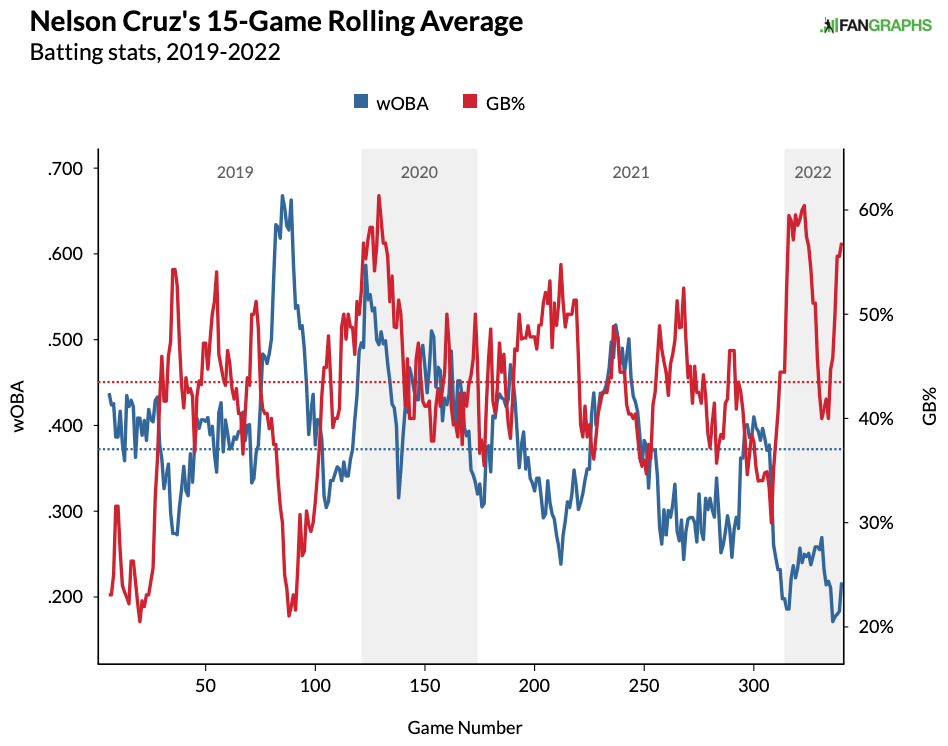 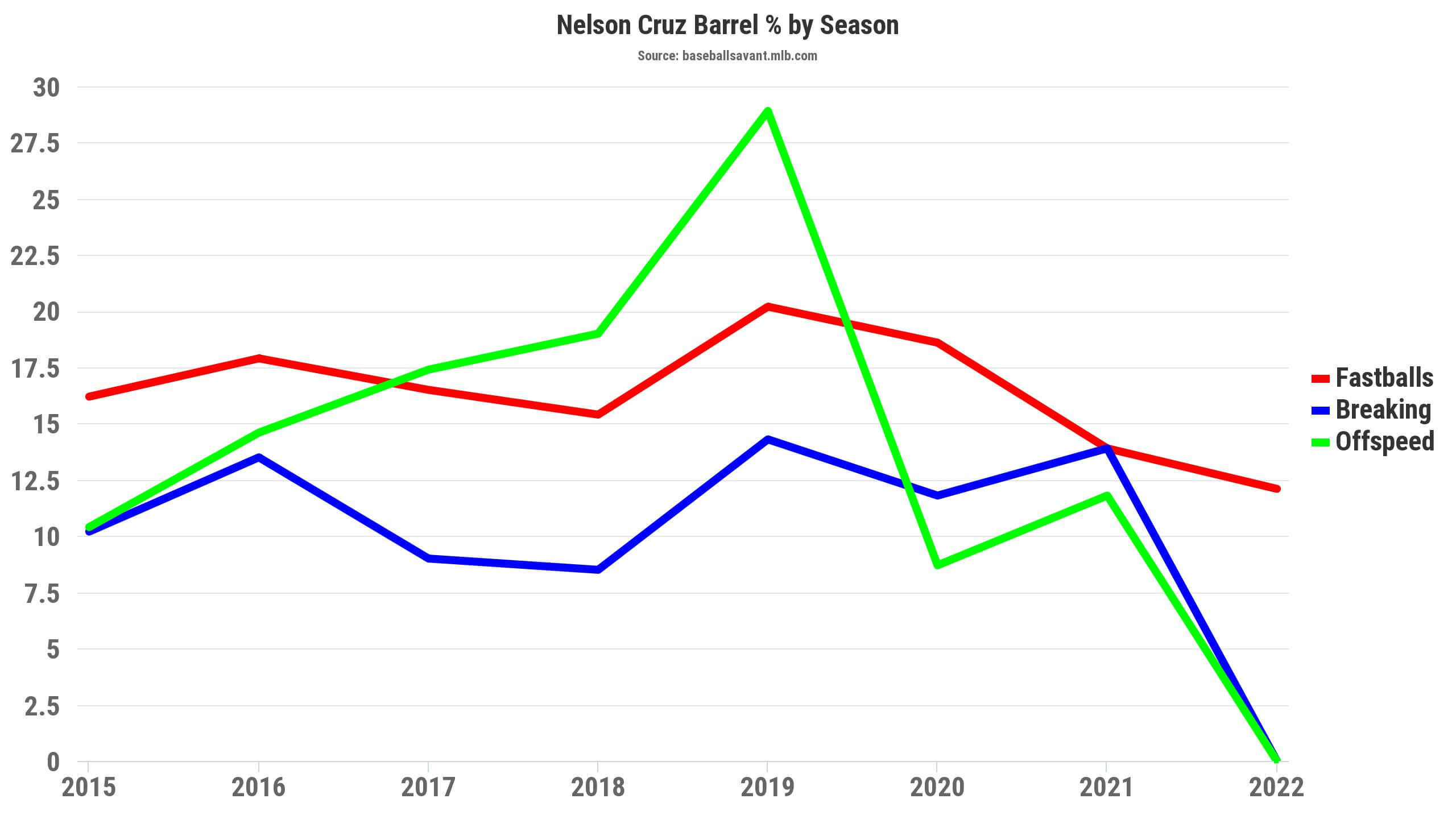 Cruz's average exit velocities, maximum exit velocity, hard-hit rate, and expected stats pop red. Although those numbers aren't the only piece of analysis, it's notable with the consistent track record of Cruz with the haters yelling we knew this would happen (13 years later). 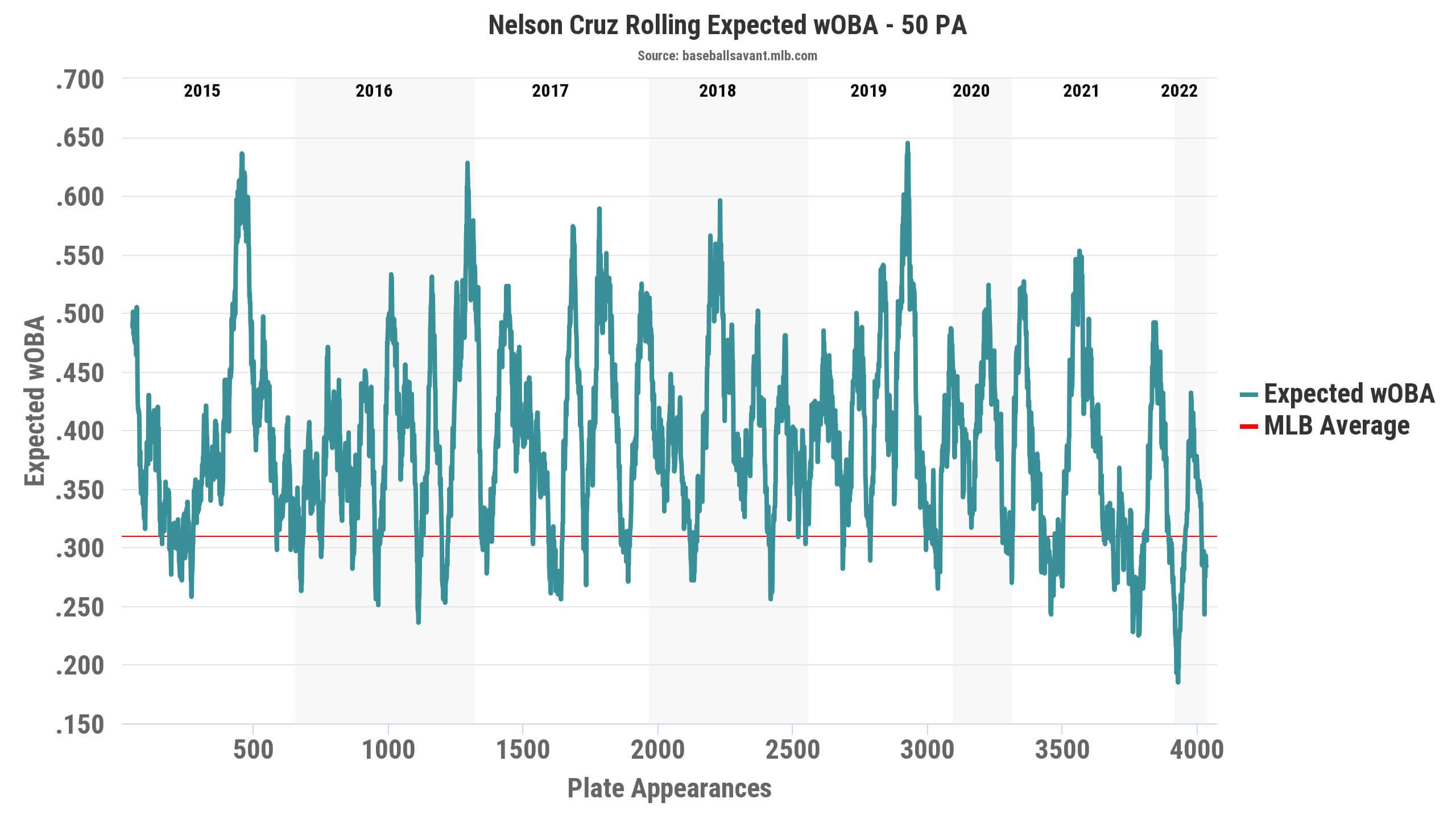 Unfortunately, it's not just one or two metrics that worry us for Cruz. However, the lowered barrel rate and launch angle align with the jump in ground ball rate. 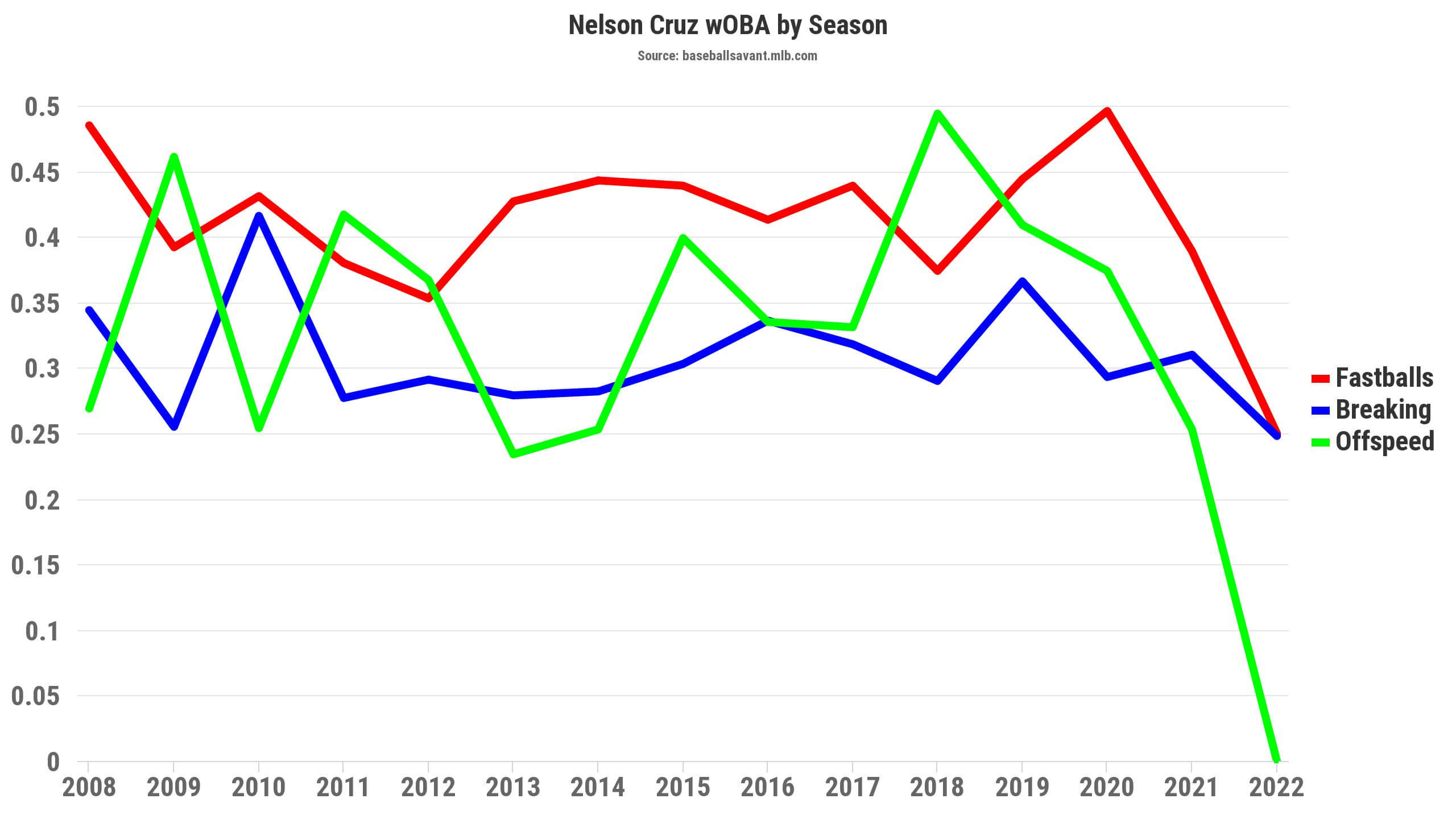 Although we're dealing with a small 2022 sample, Cruz struggles against all pitches, particularly fastballs. It could mean Cruz hasn't been able to catch up to fastballs, or it's merely a slow start for the veteran masher.

The same trend happens with the breaking and offspeed pitches, though it's less drastic versus the league averages. For the first time in Cruz's career since 2009, he has a negative Run-Value in the heart of the zone. A negative Run-Value for hitters isn't positive.

With the extensive track record of 13 seasons, the natural response involves an attempt to buy low on Nelson Cruz moving forward. Of course, it depends on what you're trading away to acquire Cruz. The BAT X projects Cruz for 20 home runs, a .246 batting average, and a .750 OPS. We have to go back to 2012 to find an OPS south of .800 for Cruz. In 10-12 team leagues, fantasy managers might find Cruz available on the waiver wire. Attempt to buy the dip with Cruz, given the track record, but proceed with caution.