In Week 11, we have eight teams playing five games, which is likely a factor of most teams playing 6-7 games during the week of Memorial Day. Outside of the Marlins hitters, Angels, and Athletics, we don't have a ton of seemingly slam dunk fantasy-friendly matchups. Even with the Angels and Athletics hitters, it's difficult to find a few streaming options since there's the likelihood for platoons with their lineups. Each week, it seems more and more difficult to find streaming hitters. After some two-week hot stretches, those hitters fall into must-start status, particularly in 15-team leagues. Especially, with so many injuries, fantasy managers seem forced into playing a healthy hitter with semi-regular playing time.

We only have three teams playing seven games with the rest playing six games this week. So with the Red Sox, Royals, and Marlins, it's about volume. However, for the Angels, they face the Diamondbacks pitchers who allow a league-worst .338 wOBA on the season. Meanwhile, the Royals also rank 12th worst with a .316 wOBA allowed.

For the Dodgers, it's similar since they face the Pirates with the 6th worst wOBA allowed at .327 and the Rangers pitchers allow the 9th worst wOBA at .323. We know the Pirates home ballpark tends to rate as pitcher-friendly, but we like the hitter matchups based on the weak opposing pitchers. The Athletics face the same teams as the Angels but in a different order.

One quick note on the Mets, I love their matchups at Baltimore against their projected starters of Bruce Zimmermann and Matt Harvey. However, they only play five games so it's about less volume this week. Meanwhile, with the Rockies, they play all six games away from Coors Field, and that typically doesn't translate to offensive production.

Boring, unexciting, veteran. Use whatever describing word you want with Jonathan Schoop, but he consistently produces even if it's not league-winning upside. Most of Schoop's home runs came in the past six games with four in that stretch. Up to June 1st, Schoop recorded a hit in ten out of the last 11 games. Schoop doesn't have an exciting profile under the hood with a 53.4% ground ball rate, 29.1% fly-ball rate, and a 46.6% pull rate. All while playing in one of the worst home ballparks for hitters with a 0.89 HR Park Factor per EV Analytics.

The Tigers have a mix of middling to tougher matchups since the Mariners have a .314 wOBA allowed (No. 16) and the White Sox rank top-5 with a .287 wOBA allowed. However, with Schoop, it's about riding the hot streak even though the profile isn't exciting. Schoop's also recording a career-best 115.3 mph maximum exit velocity, which could mean the recent power surge is legitimate. He's a relevant Week 11 streamer in 15-team leagues or deeper.

Over the past 14 days, Hunter Renfroe is crushing with two home runs, nine runs, and five RBI with a .382 batting average and a 1.167 OPS. Typically, Renfroe drains our batting average with a .225 batting average combined from 2017-2020. However, in 2021, he holds a .259 batting average likely boosted by a .304 BABIP, which is a career-best outside of 2016 with only 36 plate appearances. When we compare Renfroe's career .260 BABIP, it makes us wonder what's different. The main culprit is likely due to the career-best 21.8% line drive rate since he often uses a pull-heavy fly ball approach common for power hitters.

As one of the few teams playing seven games, I like the volume for Red Sox hitters. The Astros pitchers have performed well even with their injuries, but I like the Blue Jays matchups to finish off the week. With Renfroe's career-best 114.7 mph maximum exit velocity and solid 11.9% barrel rate, stream him for some power and potentially batting average assuming he remains hot in Week 11.

Michael A. Taylor is continuing his resurgence here in 2021 with a .256 batting average, five home runs, 20 runs, 19 RBI, four steals, and a .705 OPS. Since the Royals have seven games ahead, Taylor is a nice deep-league streaming target. Over the past 14 days, Taylor is hitting .290 with one home run, five runs, and six RBI. That comes with an 11.8% barrel rate and 52.9% hard-hit rate during that stretch. I wanted to note Edward Olivares here, but the Royals sent him back down to Triple-A. In shallow leagues, make sure Andrew Benintendi isn't hanging around as he's heating up as well with a .361 batting average, two home runs, six runs, 11 RBI, and one steal over the past 14 days.

For Taylor, his success is a bit BABIP driven with a .500 BABIP, 3% walk rate, and 45.5% strikeout over the past two weeks. Sneakily, the Athletics pitchers have the 13th best team wOBA allowed at .309 with the 6th best ERA at 3.22 over the past 14 days. Overall, middle of the road matchups for the Royals hitters, but Taylor is a deep league streamer.

This is a hitter that I can't quit in Garrett Cooper. He's built like a linebacker and displays the power whenever he earns playing time. Over the past 14 days, Cooper looks dominant even with a short injury scare. During that span, he has three home runs, six runs, and nine RBI with a .429 batting average. Cooper also has an 11.1% barrel rate and 66.7% hard-hit rate during that span. 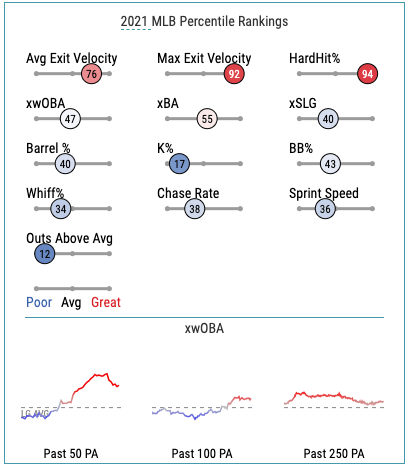 With one of the rare seven-game stretches in Week 11, the Marlins will face the Rockies and Braves pitchers that haven't pitched that well this season. On the season, the Rockies rank second to last with a .335 wOBA allowed and the Braves rank 7th worst with a .326 wOBA allowed. In a corner infield or outfield spot, Cooper is pushing for fantasy relevancy in 12-team leagues.

With Jon Berti, it's for steals and with Miguel Rojas and Brian Anderson hitting the injured list. Berti is one of those utility hitters that don't wow us in any area but shows the sneaky speed with 30 steals over the past three seasons in limited playing time. As noted earlier, they play seven games and Berti should play almost every day. Stream Berti for steals with the Marlins ranking as a team with the 7th most steals with 33 on the season. A reminder that even if Berti steals 1-2 bases, that's a solid streaming pick for a week or two when we pace that out for a full season.

We'll note that Tony Kemp is a deep-league target only given that some fantasy managers may not even have Tony Kemp on their radar. Kemp is receiving playing time with Ramón Laureano on the injured list. Over the past 14 days, Kemp holds a .445 wOBA that's second to Matt Olson. He also has two home runs, six runs, and nine RBI with a .394 batting average in the past two weeks. The Athletics face the Royals and Diamondbacks, which both rate as fairly friendly matchups. With the Diamondbacks, they rank dead last with a .338 wOBA allowed and the Royals rank 12th worst with a .316 wOBA. Kemp is available virtually everywhere with a current 0% roster rate on NFBC leagues. Consider bidding on Kemp to stream in Week 11.