Fantasy Breakdown: Why Size Matters At The RB Position

I know the title of this article has already grabbed your attention so let's start. Often times with the running back position we see them come out of college as dynamic runners but measure undersized. Then analysts and fans alike figure that they are prime candidates for regression because we assume that their small bodies will breakdown as they accumulate hits in the NFL. But is this really the situation? What inspired me on this topic was from recently finishing the book "Take Your Eye Off The Ball" by Pat Kirwan. In the book, Pat discusses, how the NFL has become a pass-happy league, and with that defenses are forced to put an emphasis on speed on defense to keep up with the freakishly athletic wide receivers/tight ends on offense. But, when a defense is forced to place smaller defenders on the field for speed purposes, it really exposes defenses to a power run game, behind a powerful running back. So what sizes have the best running backs measured at? 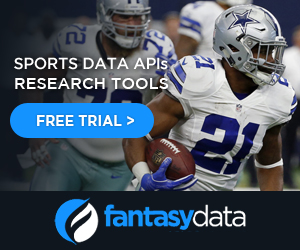 Just four running backs over the last two seasons that were under 5'11″ rushed for more than 1,000 yards last season. Just one running back in the past two seasons did it while weighing under 200 pounds (Philip Lindsay). Just four running backs rushed for more than 1000 yards over the past two seasons weighed less than 215 pounds. So when you are looking for elite rushing production more often than not it is going to come from a running back that is around 6 feet tall and weighs anywhere between 215-225 pounds. That should be a sweet spot as another metric to track especially as we evaluate not only NFL running backs going into 2019, but evaluating rookie prospects heading into next season. We've looked at rushing totals from a size perspective, but how about just total fantasy points? Do we see a major difference? I would hypothesize that we would see a small dip in overall size, just because fantasy is so predicated on the passing game, obviously in PPR formats for sure.

The only major inclusions into the top ten in 2017 are Alvin Kamara and Carlos Hyde. For 2018,  again Kamara along with James Conner, James White, and David Johnson. Here are there sizes:

Again it's more of the same with James White really appearing as the only true outlier falling under in 6 feet and 215 pounds. But White is not a traditional running back as his role with the Patriots is dominated in the passing game.

Now, how do these sizes compare to that of the running backs weighing in at the 2019 NFL Scouting Combine? Here are the results at the running back position for notable running backs. These measurements come from Charles Robinson via Yahoo Sports on Twitter.

Running backs from the 2019 Draft Class that best fit the 6 feet and 215-225 pound mold include LJ Scott, Qadree Ollison, Alex Barnes, Rodney Anderson, and Tony Pollard. Shoutout to Alex Barnes who repped out 34 bench presses, which was the highest of a running back since 2003. Barnes actually performed the best out of all the larger running backs.

From a size and height standpoint, Pittsburgh RB Qadree Ollison measured as the biggest back. Just some background on Ollison, the guy rushed for 1,121 yards as a true freshman with Nathan Peterman as his starting quarterback. Yes, the infamous Nathan Peterman. However, over the next two seasons, Ollison lost the job to James Conner his sophomore season. Darrin Hall took the starting role in 2017, and then Hall and Ollison split carries in 2018. They both ended up rushing for over 1,000 yards in 2018. Ollison finished his college career with 50 receptions for 375 receiving yards. With the favorable size profile, here is how Ollison performed at the NFL combine:

Bad overall metrics across the board, but for a bigger running back, not necessarily a death sentence. Speed is not his game.  However, along with all the big backs, there are also small running backs in this class.

Justice Hill and James Williams were the only two running backs to weigh under 200 pounds. Now in the case of Williams, it makes more sense as he was the ultimate pass-catching running back for Washington State.  He caught 202 passes in three years at the college level. His senior year he had more total receiving yards (613), than rushing yards (560). But in the case of Hill, he just fits more of the narrative of just an undersized traditional running back. He impressed mightily at the NFL combine when he ran a 4.4 40-yard dash time.

Other smaller running backs that came in under six feet and just over 200 pounds include Williams, Devin Singletary, and Bryce Love. Williams' final season at Texas A&M, may have been most impressive out of this group, as he rushed for 1,760 yards and 18 touchdowns in the SEC Conference. However, none proved to stand out during the 2019 NFL Combine. So with such a mixed bunch how much should be weighed for size in evaluation?

Size at the running back position needs to be factored in terms of fantasy production projection. By just looking at the running backs that finish in the top in terms of fantasy production, they are more often than not on the plus side of 6 feet tall and north of 215 pounds. Keep in mind that size is not the be all end all, but it's definitely worth considering and educating yourself on when you evaluate the running back position and could be used as a tiebreaker between two-players. As much as we like to think that the NFL is all about passing, savvy coaches realize that with that increase the power-run game behind a large running back remains a critical part of any efficient offensive approach. Especially if have a large running back that also can be a weapon in the passing game; that's the recipe for fantasy success.

Consider it with any running back that you are trying to project dual-threat ability on. For example, James White is used a majority in the receiving game and Derrick Henry in the running game. But if you then add the other element (running for White or receiving for Henry) which one would you be more excited about?

I thought while we were on the topic of that I would share this tweet as well from a follow @PyroStag. He shared this interesting tweet about wide receivers listed 175 pounds or lower to enter the draft since 2000. Finding the next DeSean Jackson might be harder than you think.

Here is your list of 175 pound or lower wide receivers to enter the NFL since 2000.

DeSean Jackson is the for sure hit, who else? pic.twitter.com/lfKCWXU6fc

Notable wide receivers that weighed in less than 175 pounds at the 2019 NFL Scouting Combine:

Previous Article NFL Coaching Changes: Fantasy Players Most Impacted From...
Next Article 5 Reasons Jamison Crowder Will Thrive with the Jets