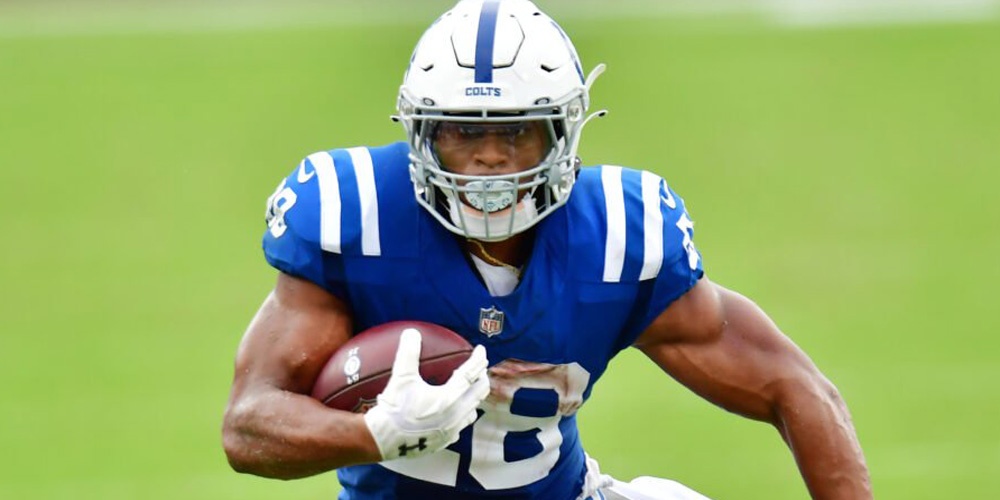 This article will tell you about 10 running back advanced stats you should know about as we approach Sunday's Week 2 slate of NFL action. The advanced metrics that FantasyData provides our subscribers are not the end all be all. They are very useful at helping you better understand matchups and make the best possible lineup decision.

Taylor now finds himself as the lead back in the Colts running back by committee after Marlon Mack tore his Achilles in the season opener against the Jaguars. Both Taylor and Nyheim Hines finished Week 1 with an opportunity share (The percentage of total team running back carries plus targets) of 40.5%. This translates to 15 opportunities. Taylor (6) tied for the third-most targets and led all running backs with 67 receiving yards. He is my preferred option as the Colts host the Vikings in a game with a 48.5 over-under total. Minnesota's defense allowed the seventh-most fantasy points to running backs in Week 1. Taylor is firmly on the RB1 radar.

Robinson has emerged as the head of the Jaguars running back by committee. The only running back with a higher opportunity share than Robinson (85%) was Christian McCaffrey (93.1%). Robinson finished Week 1 with the 11th highest Juke Rate among running backs. This metric isolates a running back's on-field elusiveness and tackle-breaking power by dividing the total number of evaded tackles by the total number of touches (carries plus receptions). Robinson was only targeted once as a receiver out of the backfield. The presence of running back Chris Thompson and his prowess as a receiver out of the backfield make Robinson susceptible to game flow. He's a mid-range RB2 against the Titans this week. Tennessee’s defense has allowed an average of 18 touches, 90.6 total yards, 1.2 touchdowns, and 20 PPR fantasy points per game to top running back scorers over its last five games.

Johnson accumulated 109 total yards in Week 1 against the Chiefs. He only had 14 touches, but Duke Johnson’s ankle injury could open the door for Johnson to see additional opportunities against the Ravens. David Johnson had the third-highest snap share (81.5%), sixth-highest opportunity share (71.4%), and fifth-highest number of Yards Created (36). This metric measures all yards above and beyond what was blocked. Yards created are generated by the runner after the first evaded tackle. Johnson also had two rushing attempts of 15 or more yards. The matchup between the Ravens and Texans is expected to be a high scoring affair with a 54.5 over-under total. Johnson is in a great position to be used as a runner and as a receiver out of the backfield.

Montgomery rushed 13 times for 64 yards against the Lions in Week 1. He played through a groin injury and didn’t appear to suffer any setbacks. Montgomery’s workload was encouraging considering the negative game script. He faced a stacked front on 38.5% of his rushing attempts which was the third-highest among running backs in Week 1. Montgomery also ranked ninth in Juke Rate. He will have an opportunity to finish as an RB1 in Week 2 against the Giants, who have allowed an average of 17.2 touches, 101 total yards, one touchdown, and 19 PPR fantasy points per game to top running back scorers over their last five games.

FantasyData has a wealth of statistical information available to you at your fingertips. Do you ever wonder how to weave all of the information together in order to make informed decisions for your fantasy football team? That's the purpose behind the Advanced Metrics series that I'm writing this season. One way to approach any decision in fantasy football is to analyze two things. The first one revolves around the narrative. What are NFL Insiders, beat writers, and coaches saying. The second one revolves around the statistics, metrics, and other data. Take a moment to think of a piano. You can play music with one hand, but once you use both hands the music is even better. You should have the same mindset when it comes to managing your fantasy football team. If you have additional questions you can also refer to my fantasy football rankings or better yet reach out to me on Twitter for an immediate response (@EricNMoody). Thanks for reading and please sign up for FantasyData Premium. 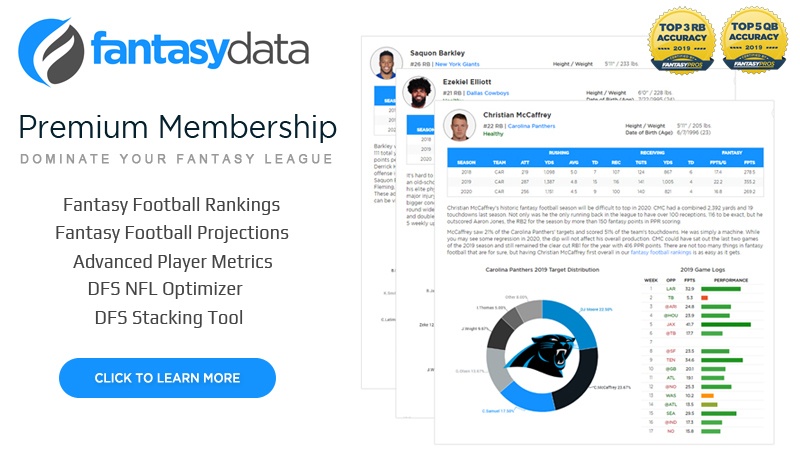