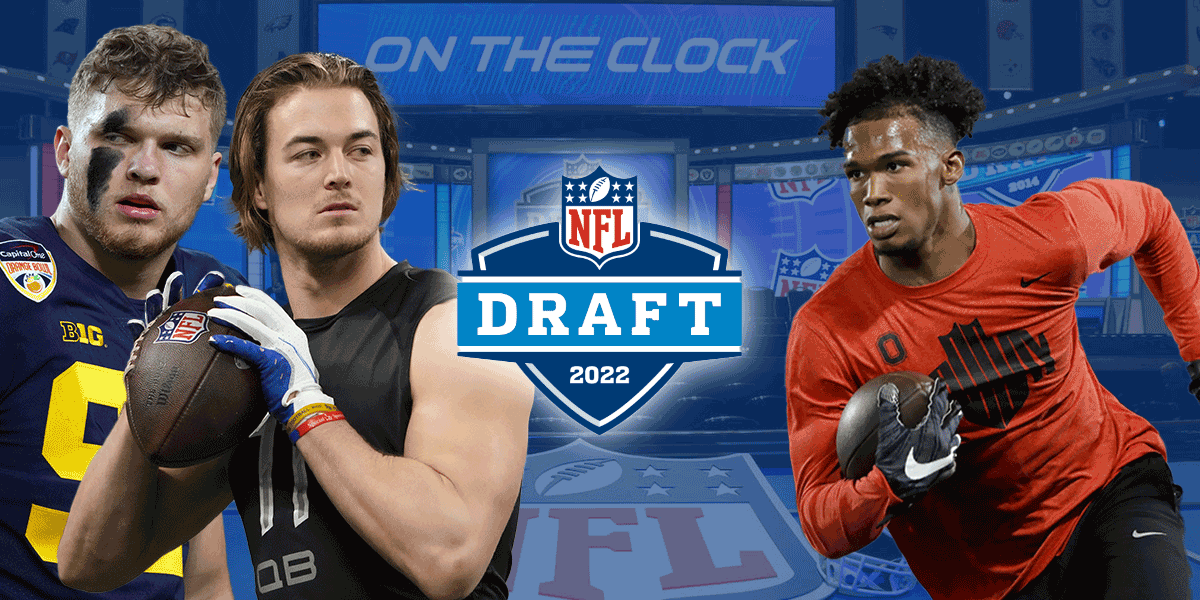 We are now entering the final days before the 2022 NFL Draft. Players' dreams become reality while NFL teams begin 3 nights of preparation for their futures. Here is my final mock draft of what each franchise should do in those coming days. Also, check out Jake Oliver's Mock Draft here

Aidan Hutchinson provides the Jaguars with a proven pass rusher, this one with amazing athletic traits. This pick could ultimately be decided between Hutchinson and Travon Walker.

A powerful pass rusher with an amazing burst off the snap. Thibodeaux, going into the season was regarded as the consensus #1 player heading into the draft. The Lions will land their 2nd consecutive first-round pick for Oregon

The Texans get Evan Neal, adding another tackle opposite of Tunsil. Neal would add positional value across the line. He has played over 700 snaps at LG, RT, and LT in the last 3 seasons.

Ekwonu adds another piece to the offensive line that the Jets continue to build on over the last few seasons. He is a powerful run blocker but still a slight work in progress in pass protection.

Travon Walker is a size and speed combination EDGE that will be a good addition to the defensive live for the Giants. He will consistently win with his Bull Rush moves but will need to develop more moves at the next level

Malik Willis is to Carolina in a move where Matt Rhule is looking to save his job. This pick could ultimately come down to the Offensive Line or a Quarterback but here the Panthers roll the dice on a project player with the strongest arm in the draft.

Hamilton has shown enough to cover sideline to sideline to not slide as far as some have rumored him to recently.  Hamilton can line up near the line of scrimmage or as a deep back.

Johnson has the ideal size at 6’4” 254 to play EDGE at the next level. His motor for never giving up on plays lands him in the top 10 with Atlanta, who needs a high effort pass rusher.

Injuries have slowed down Stingley’s run as the consensus top CB in the draft. His freshman year alone showed that he can line up with anyone, especially against tough SEC completion. After a strong pro day, he launched himself right back into the conversation to go before Sauce Gardner.

Drake London will pair nicely with fellow receivers Corey Davis and slot man, Elijah Moore. London had his season ended early due to surgery, but he was nearly matchup-proof in the first half of the season, coming down with anything in his range.

Garrett Wilson will line up opposite fellow Ohio State Alumni, for the newly acquired Carson Wentz. Wilson has all the tools to be the best wide receiver taken in the draft.

Minnesota runs the card up to the podium and ends the slide of Sauce. Long, physical, and unafraid of lining up in press coverage. Gardner played over 800 snaps in press coverage and will continue to do so in the NFL.

Texans take Mcduffie with their 2nd pick in the 1st round. He is the press zone coverage defender in the draft class. Although his size and speed have remained a question after his pro day and his performance at the combine, his processing will keep him in the top half of the draft.

Combine standout, Jordan Davis lands with Baltimore and anchors down the middle of the defensive line. Davis will be a day 1 impact for the Ravens on 1st and 2nd down and will make plays stopping the run.

Jameson Williams gives Jalen Hurts another weapon to help him prove that he can remain the QB of the future for the Philadelphia Eagles. Williams will not be the typical X receiver in the NFL but does have the speed to take screens and deep passes to the house.

The fall of Charles Cross finally ends in the mock. Charles Cross will replace Terron Armstead at LT. Cross has a lot on tape to show that he can pass protect with the best.

After attacking defense in the offseason so far, the Chargers spend another first-round pick on the trenches and get Senior Bowl standout, Trevor Penning. He was an all-American in the FCS. Penning is aggressive with his power and length.

Llyod is a linebacker that the Eagles can feel comfortable knowing that he can achieve whatever is asked of him. Whether he is asked to cover on passing downs or rush the passer, he has shown that he is successful at it all.

Sticking with the offense, the Saints select Chris Olave. Olave might be the most NFL-ready WR in the class but does not possess the high ceiling of the wide-outs taken ahead of him. He will fit in the New Orleans playing the WR2 role aside from Michael Thomas.

Pickett stays in Pittsburgh. After having a breakout season in 2021, Pickett remains in Pittsburgh and gives the Franchise their next QB after the retirement of Roethlisberger.

Andrew Booth Jr. is the perfect fit for New England. After the departure of JC Jackson, Belichick finds his next rookie contract star. Booth can succeed at any coverage.

Treylon Burks at 6’2” 225-pounds is the kind of receiver that the Packers would like to land after trading away Davante Adams. Burks has primarily played his time in the slot. The packers will look to use him all around the formations to get him the ball in space.

Karlaftis will fill in for the departing Chandler Jones on the EDGE. He has some of the best hands in the draft and he pairs that with one of the best bull rushes.

Cowboys will look to rebuild this offensive line that they have lost a lot of key pieces to over the last few seasons. Zion Johnson has played both outside and inside along the line. Zion could be one of the safest bets in the draft and fills a much-needed role for the Cowboys late in the first round

Elam adds another physical CB to the Bills secondary. Elam is a great player in a press scheme with his elite size and speed.

If it wasn’t for concerns about Dean’s size, he could easily make a case to be the first LB taken in this mock draft. Dean has a great ability at seeing what the play is going to be and stopping it before it happens.

Buccaneers add Daxton Hill to play the CB/S role. With Winfield playing over the top, they could use a guy like Hill who can line up on WRs and TEs off the snap.

Mafe had his stock rise during the Senior Bowl process and proved that he belongs in the conversation to be a first-rounder. The packers took Treylon Burks with their first pick replacing a player that was moved in the offseason and do so with this pick as well. Mafe will slide into the pass rusher role left behind by Za’Dairus Smith.

Chiefs have a lot of spots to fill in the secondary after free agency. Cine gives the Chiefs a replacement for Tryann Mathieu. Cine is a physical tackler and should fill in nicely for Kansas City in that same role that Mathieu played. He takes great angles to make plays on the ball carrier.

Dotson is a slot receiver with a great catch radius to succeed at the next level.  Dotson has great route running and uses that to create separation between him and defenders.

Bengals pick Tyler Linderbaum, one of the best center prospects in recent memory. Linderbaum will remain at center and that will place newly acquired Ted Karras at Left Guard, which he has played before. Bengals will continue their off-season strategy of Protect Joe Burrow at all costs

The Lions stick with defense with their 2nd pick in the 1st round. Wyatt is one of the better all-around defensive tackles in the NFL draft. He is successful at lining up anywhere between the tackles. A quick and explosive first step will pair nicely with Kayvon Thibodeaux on the EDGE.

Daniel Faris is a huge fan of NFL, College Football, MLB, NBA, Esports, and NASCAR. He has over 12 years of experience playing daily fantasy, dynasty football leagues, and also season-long re-draft football and basketball leagues. He is a husband and a proud father of three. Daniel is a lifelong Cincinnati Bengals, Boston Red Sox, and THE Ohio State University Football fan. Daniel is also a massive video game player in his free time.