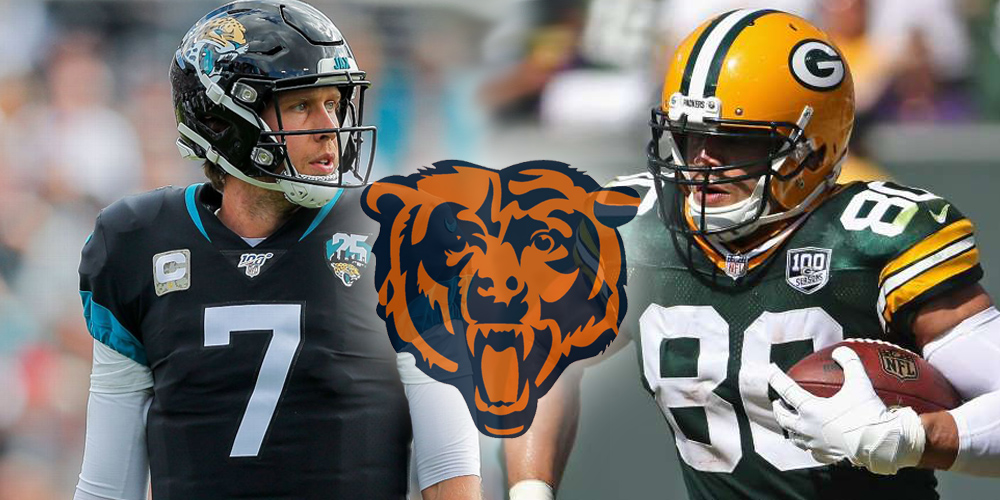 The Bears have traded their Compensatory 4th round pick to the Jaguars for Nick Foles. The trade for Foles comes with him restructuring his contract also. He still has three years left on his deal and the $21 million is still guaranteed but Foles now has the ability to void his deal after each of the first two seasons depending on how he performs. This now also gives the rebuilding Jags 12 picks in the 2020 draft. Another move the Bears made this week is the signing of TE Jimmy Graham. Graham signs a 2 year $16M deal with $9M guaranteed. Graham was released from the Packers back on March 11th.

Bears’ coaches such as Matt Nagy have worked with Foles in past and know him well.

Bringing Foles sends the message to Mitchell Trubisky that it is now or never for the 2nd overall pick from 2017, Foles will be locked into a QB competition with Trubisky when camp opens. Trubisky ranked as the 25th best QB in fantasy points, 30th in True Passer rating with a rating of 74, and only 9 Money Throws. Foles was not on the field enough last season to be a qualified passer on our Advanced Metrics page starting only 4 games total, game 1 of the season he broke his collarbone and was benched for Garner Minshew after he came back from the injury. Foles has not played a full 16 games ever in his career also. Foles might be a little more willing to take shots than Mitch who last year was seen more of a game manager hoping not to lose the game for the Bears. Coach Nagy does have a past relationship with Foles also so he should have no issues with grasping the offense at all.

I still expect Allen Robinson to eat no matter who is under center for the Bears. Robinson has been a fantasy stud with subpar QB play for his entire career. If Foles is the starter I give a slight bump to Robinson into the upper tier of WR2s. The part of the offense that will really take a hit from Foles starting is the QB rushing plays. Foles rushed 4 times in the 4 games he played while Trubisky 6 games last year with at least 4 rushing attempts. Extending plays or making adlib plays in Mitchell's strong suit. I don't see much change to the roles of Taylor Gabriel or Anthony Miller with whoever is under center. I do believe Tarik Cohen is viable as both QBs tend to check down to the RB on a pretty consistent basis. In Jacksonville, last season Foles targeted the RB 36 times in his 4 starts and Trubisky targeted Cohen 104 times. David Montgomery does probably benefit a bit from Foles being the starter as he shouldn't face as many stacked boxes when he is on the field. Montgomery is a talented runner with a knack for breaking tackles in space. Foles should be more than able to get him out in it. Also with Foles running the offense, Montgomery should see more red zone carries

The addition of Graham to this offense just doesn't make sense to me. Trubisky nor Foles targeted the tight end at a high rate last season and Graham was a shell of himself in Green Bay. Graham joins a TE room that already had Trey Burton and Adam Shaheen in it. I don't expect Graham to be much of a factor in the offense making him a lowe end TE2 with minimal upside. It is a definite possibility Trey Burton could be traded or released before camp, even with that happening I don't see much change in Graham's future.

The Bears were a bottom-tier offensive team in multiple categories, including red zone attempts, yards per play, and third-down percentage. Nagy is supposed to be an offensive genius who has not lived up to that hype, I do think that is almost all to do with the limitations he has had with Trubisky. There were leaks from inside the Bears complex that they had to really simplify the playbook for him, with Foles they should be able to hit the ground running and I expect a faster and more efficient offense. I would say with the weapons Chicago does have, and I expect them to possibly draft another WR in the upcoming draft, I will say Foles could finish as a top 20 QB next season. Allen Robinson, Cohen, and Montgomery are guys I will be watching closely as fantasy drafts get ready to ramp up. Graham shouldn't be on your radar at all.