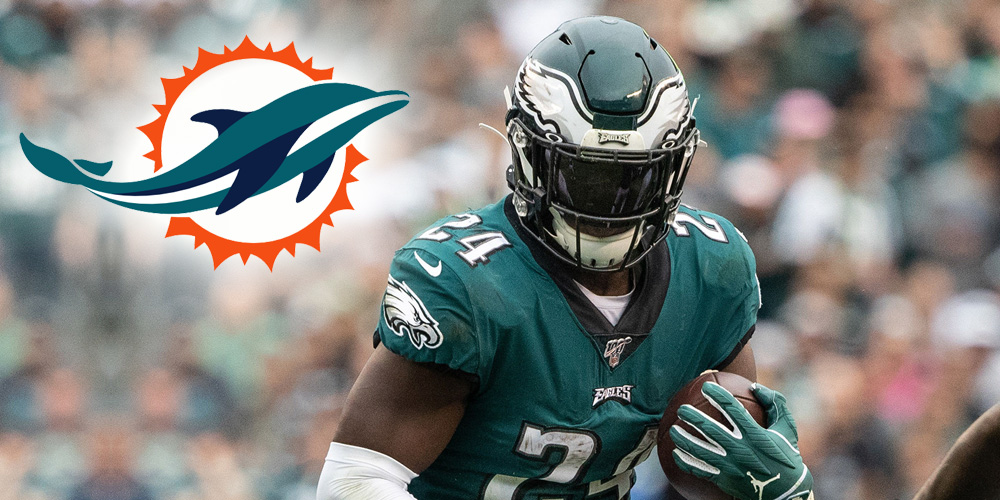 The Dolphins agreed to terms with free-agent running back Jordan Howard. Just 25 years old, Howard now finds himself on his third team (CHI, PHI) in just five years. This is a deal worth $10 million over the course of two years and one of the Dolphin’s most glaring needs. With so much going on around the league, the acquisition of Howard was one that flew under the radar. The Dolphins were one of the more active teams in this two-day tampering window, not making it easy to digest all of the moves they’ve made.

A year ago, the team’s rushing leader was its quarterback, Ryan Fitzpatrick, with an underwhelming 243 yards on the ground. After trading away Kenyan Drake at the deadline, there wasn’t a whole lot of consistency in the running back room. A mixture of Patrick Laird, Kallen Ballage, Mark Walton, and Miles Gaskin was all but impressive. Walton is the only one of the four who is no longer on the roster, though he was probably the most effective of the bunch. The other three combined for just 2.5 YPC, with Ballage heavily weighing this number down. Howard has absolutely no competition for touches in this backfield's current state.

The signing of Jordan Howard may not be all that flashy, but he should step right into an early-down role in the Dolphins’ backfield. Given the current roster construction here in late-March, Howard is the pre-draft favorite to lead the team in touches. Over the first four years of his young career, he’s proven that he has the ability to take on a workhorse-like role. In limited action with the Eagles last season, Howard was on pace to have his fourth consecutive 900+ yard season on the ground. He was carving out a role for himself in the Eagles backfield leading up to the team’s Week 10 bye before a shoulder injury shut him down the rest of the way. In just nine weeks of action, Howard carried the load for the Eagles leading them in rush attempts. He saw 10+ carries in seven of these nine games. Howard was relied upon in goalline situations, scoring five of his six rushing touchdowns inside the five-yard line. He failed to provide any type of help through the air with just 10 receptions on 14 targets, which should not surprise anyone. There were only three games where he caught more than one pass. We shouldn’t expect him to be much help at all in PPR but does see a boost in standard leagues.

He is also 1 of 5 players to rush for at least 6 TDs in the last four seasons. Production!

When looking at FantasyData’s Advanced Efficiency Metrics, Howard’s name actually came up in a couple of spots. He finished seventh among all running backs in Breakaway Rate (5.9%), which measures runs of 15 or more yards. Howard also finished inside of the top-20 in Juke Rate, which came out to be 25.6%. The nice thing about analyzing players who had shortened seasons is that you can adjust the metrics and view them on a per-touch basis. It puts everyone at a level playing field to get true numbers on what everyone was able to do, no matter how many touches they garnered.

Howard should find himself in almost an identical situation as last year. The Eagles acquired him in a trade with the Bears in late-March before going on to spend their 53rd overall pick on Miles Sanders. Howard kept his early-down, and goalline roles, but surrendered snaps to Sanders on passing downs. With five picks in the first two rounds of the 2020 NFL Draft, it is almost certain the Dolphins will use one of these to address their need at running back. According to the Sun-Sentinel, the Dolphins have already met with some of the top running backs in this draft class including J.K Dobbins (Ohio State), De’Andre Swift (Georgia), Jonathan Taylor (Wisconson), Cam Akers (Florida State) and Zack Moss (Utah). If they decide to bring in a rookie, we can still expect Howard to grind out carries on first and second down. He should see 150-200 rush attempts and be a contributor in this backfield regardless of who else is brought in.