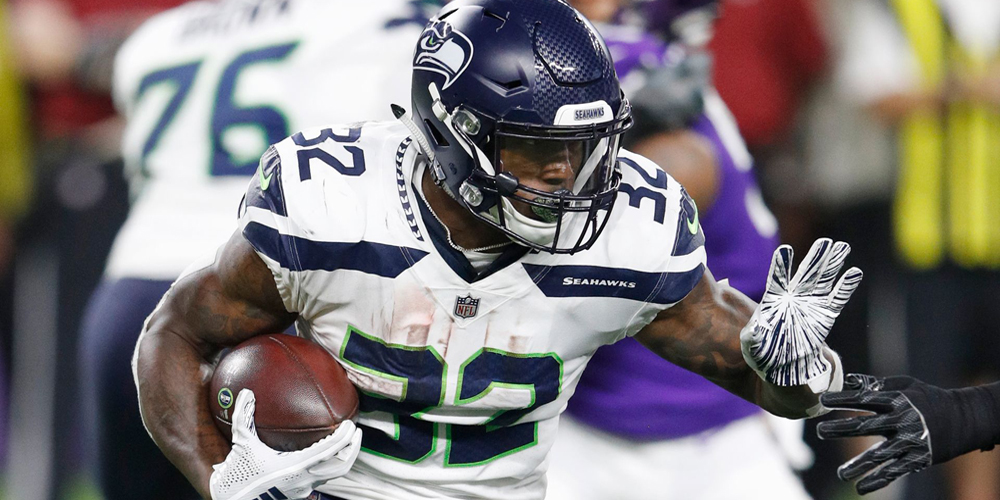 For the last four seasons, Chris Carson has been the focal point of the Seattle Seahawks rushing attack, picking up where players like Marshawn Lynch and Thomas Rawls have left off. A hard-nosed runner with an excellent burst, Carson's highlights include a pair of 1,000+ yardage seasons in 2018 and 2019. Perhaps the most impressive accomplishment of Carson's career to this point has been the fact that he held off 2018 first-round pick Rashaad Penny in order to keep his starting job for the Seahawks. At least until today, that is. With Seattle's decision not to tag Carson, one has to imagine that the former Oklahoma State standout will seek out a new home, joining a free agent market that will include numerous other talented backs, including Aaron Jones and Kenyan Drake.

While Carson has dealt with some injury troubles during the first part of his career, he's proven to be a capable three-down workhorse when healthy. Teams like the Jets, Steelers, Texans, and Packers could all look to bring Carson in on a front-loaded two or three-year deal. Though Seattle will likely remain a suitor, it's hard to imagine the team throwing money at a player with Carson's mileage, especially when they've got a couple of promising young backs waiting in the wings. As for Carson, financial security should be the name of the game at this stage in his career. Considering his lengthy injury history, an incentive-laden deal with a team like the Jets makes the most sense. While New York might desire a splashier signing (Aaron Jones), Carson could be the perfect equilibrium between value from a financial standpoint and value from a production standpoint. Should the Jets pass on the opportunity to bring Carson on board, Pittsburgh and Houston make a lot of sense, as a power runner like Carson could help either team re-establish the run game.

Despite all the drama this offseason, the Seahawks are a sleeper with many people in terms of betting odds. Sure, Russell Wilson has hinted about a trade out of Seattle and yes they might be losing their starting RB, but if the GM John Schneider can weather this storm, and find a productive replacement, the Seahawks could be an underrated team in the NFC West. BETMGM has the Seahawks +3000 to win the Superbowl and +300 to win their division. Those are great betting odds if you get the signup bonus with the BETMGM code. The NFC West is no joke, but don't forget the Seahawks won this division last year with a 12-4 record. They have a young roster and are only going to get better with time.

Assuming Carson hits the road, DeeJay Dallas should see an immediate opportunity to take up his mantle. A skilled receiving back with the build to be an in-between-the-tackles runner, the former Miami star is by far the most promising player in Seattle's current crop of backs. While Dallas only mustered 3.2 yards-per-carry as a rookie, a lot of his struggles can be attributed to poor offensive line play. Should he see an expanded role in 2021, Dallas has a chance to be an RB3 in PPR formats. Even if his role is limited to third downs and other passing game work, the upside makes Dallas a solid late-round target. Heck, it's possible that he finds success even if Carsons returns to the Pacific Northwest.

Penny's chance at redemption should come at the expense of Carson, the man who denied him a starting role for the Seahawks in 2018 and 2019. While his recovery from an ACL injury in 2019 has been both long and grueling, Penny should be healthy to start the 2021 season, which could be a make or break campaign for the fourth-year back. While many Penny owners have given up on the former San Diego State star, there's a light at the end of the tunnel. However, if the Seahawks decide to bring back Carson (or sign another back of similar talent) then the writing could be on the wall for the 2018 first-round pick. It will certainly be interesting to see how this situation plays out.

A self-proclaimed "cat person" with an affinity for pass-catching running backs and slot receivers, Alex is a well-traveled writer whose work can be found on sites such as 3CoSports and Dynasty Nerds in addition to FantasyData and BettingData. Follow him @AlexKurpeskiNFL on Twitter for more great content!