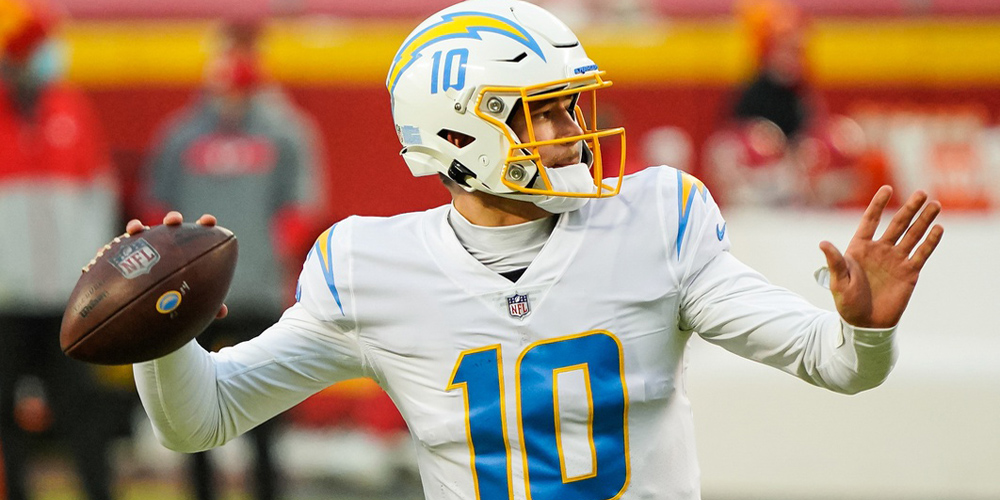 Week 2 is here and we're ready to take a look at which players can help us win some money in 50/50's, Double-Ups, and maybe even some SIngle Entry or 3 Max type contests with smaller field sizes. Let's go!

This week I'll decide on who to start at QB between a few players. At the moment, my top choice is Justin Herbert ($6700). Herbert has the top game environment on the slate, at home facing Dallas. The Cowboys seem likely to be without Randy Gregory, which will affect a defense that struggled to get pressure on Tom Brady last week. Herbert has the mobility to change the launch point and keep Dallas on their heels and I am guessing he'll stay clean most of the day. This game has a 55 point total with the Chargers implied to score 29 of those points. Brady hit Dallas for 379 yards and 4 TDs last week. That's a lofty total but well within Herbert's range of outcomes. For $200 less, we can consider Jalen Hurts ($6500) as well. The 49ers defense lost their only good cornerback halfway through the 4th quarter last week. While Emmanuel Moseley may play, he's not the same type of player as Verrett. This opens up more options for Hurts, who had a nice game against the Falcons last week. The only area of true concern when going against the 49ers, for now anyway, is K'Wuan Williams has been effective at shutting down slot WRs. Hurts has the running ability to boost his floor and his speedy weapons (49ers have been susceptible to deep passes over the past few years) could cause problems for the new corners the 49ers will have back there this week. This is another 50 point game total in Vegas's eyes with the Eagles being home dogs. That's an environment you want to get a piece of for a QB in DFS. If looking to go cheap at QB, I might look at Matt Ryan ($5600). The Falcons are heavy road dogs against a defense that does not allow opponents to run the ball effectively. Ryan is going to be forced into heavy volume and could pick up 20 points in this matchup.

In case you haven't read this a million times already, Najee Harris ($6300) was on the field for every single offensive down for the Steelers last week. He had a disappointing output but the usage is encouraging, especially against the Raiders defense that has to come back east to play this game. The Steelers are a 6 point favorite which is great for RBs (home favorite). David Montgomery ($6100) also finds himself as a home favorite, although by only 2 points right now. Montgomery was not on the field at the same rate as Harris last week (59% of snaps) but his usage and production against a strong defense while playing on the road are indicators for him to have a great game this week. Cincinnati's new DL looked good against the Vikings offensive line last week and the Bears aren't that much better, but they helped Montgomery produce the second-highest Rush Yards Over Expectation Per Attempt last week, according to NFL's Next Gen Stats. Joe Mixon ($7000) is on the other side of this game and he had a 78% snap rate while handling 81% of the RB carries (21) for 82% of the RB rushing yards (103), while also receiving 80% of the RB targets (4) through regulation against Minnesota's revamped run-stuffing defensive line. Mixon scored 25.6 of his 28.0 DK points before overtime began. His usage and production are a nice buy at $7k this week. A couple of sub-$6k guys worth considering are Nyheim Hines ($4700) (who had 8 targets against another run-stuffing defense last week) and Chase Edmonds ($4900) (Edmonds handles all the passing game work for Arizona and should see a boost to his 58% snap share if this game is as close and high-scoring as Vegas has it).

For the same reasons I like two of the QBs above (Herbert and Ryan), I like their WRs this week, too. Calvin Ridley ($7500) comes in a little higher in salary than Keenan Allen ($7000) but should see plenty of volume if playing from behind all game, but the savings and matchup against Dallas will probably tilt me more toward Allen this week. The Vikings receivers should all be in a good spot this week and making the choice on which one to use may be a matter of who's salary fits best once you're constructing rosters. Justin Jefferson ($7400) and Adam Thielen ($7100) are the go-to guys in this offense but K.J. Osborn ($3300) has some appeal as a salary saver against a defense that allowed Tennessee to score more points from their WRs when they were lined up in the slot than out wide with 13 slot WR targets accounting for 65% of all WR scoring against Arizona. Osborn was targeted 9 times in Cincinnati last week, so we may want to consider him as an underpriced player at this point. My favorite idea in the $6k range is Allen Robinson ($6200) who seems underpriced for his matchup. He is coming off of a disappointing fantasy scoring output after facing one of the league's toughest secondaries last week. Here he gets to attack a Bengals defense that allowed the second-most points to WRs lined up in the slot and only 3 other teams allowed more targets to WRs lined up in the slot. That data is somewhat skewed because they played an additional 10 minutes in overtime but one of Thielen's touchdowns came through the slot and K.J. Osbourne had himself a game in there. Robinson's route tree needs to get deeper to fully trust this pick, and perhaps it will against a secondary that doesn't include Jalen Ramsey following you around. One thing Robinson has on his side is volume. He still saw 11 targets in that game. Darnell Mooney ($4200) is also an interesting play that could be more suitable for larger field or Single Entry/3-Max contests where we're looking for a little more leverage. Carrying on with the idea of playing at least one receiver with our QB, does anyone think the 49ers depleted CB group is going to be able to keep up with Devonta Smith ($5400)? I'm going with, not likely. Smith is a player I think we may still be getting at a discount because that offense has plenty of room to grow and he's just getting started in this league. Smith had the second-largest share of his teams' Air Yards in Week 1 and should see plenty more this week.

It's going to be hard to get to Darren Waller ($7600) this week but if the salary is there he's going to get a ton of volume as Derek Carr's most reliable weapon as a road dog. Either TE in the Atlanta/Tampa game looks like a solid play. Tampa has funneled targets inside for the past few years with TE's seeing 8.1 targets per game in 2020 and the Cowboy's TEs racking up 9 targets last week. This is a softer matchup for Kyle Pitts ($5200) than Philadelphia was and he stands to benefit if Tampa focuses more on Ridley and keeps Matt Ryan checking down. Rob Gronkowski ($4700) benefited from a game script last week where Brady was forced to battle all game and targeted Gronk twice in the End Zone when they need scores. There are some decent TEs on the lower end of the salary scale this week to choose from but the two that interest me the most from the sub-$4k group are Jared Cook ($3900) after seeing what Gronk did to that Cowboys defense and because he was productive himself catching five of his eight targets for 56 yards, and Gerald Everett ($3600). Everett may be more of a Single Entry or 3-Max play than a Cash-Game play because we haven't seen the volume yet but he sets up well in his game. Tennessee was said to have struggled in joint practices against Gronkowski this summer. Some of that may be based on Gronk finding some sort of fountain of youth, as witnessed against Dallas, or it may be the sign of things to come against the Titans defense. Arizona doesn't utilize their TEs much in the passing game so this could be a chance to get Everett at low ownership in a spot where he could do well, even if Seattle is blowing out the Titans.

After watching Chandler Jones wreck a Pro-Bowl left tackle (Taylor Lewan) last week and then also seeing how much pressure the Bengals were able to get on Cousins (especially up the middle) I am thinking the Cardinals DST ($2900) can get some sacks or force some bad throws against the Vikings this week, making them the cheapest DST with the highest upside on my board. The Seahawks DST ($3000) and their 12th-Man home-field advantage are also in a great spot this week. 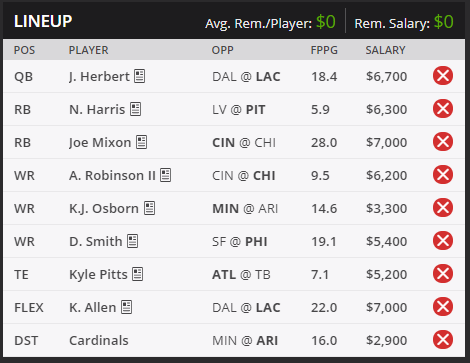