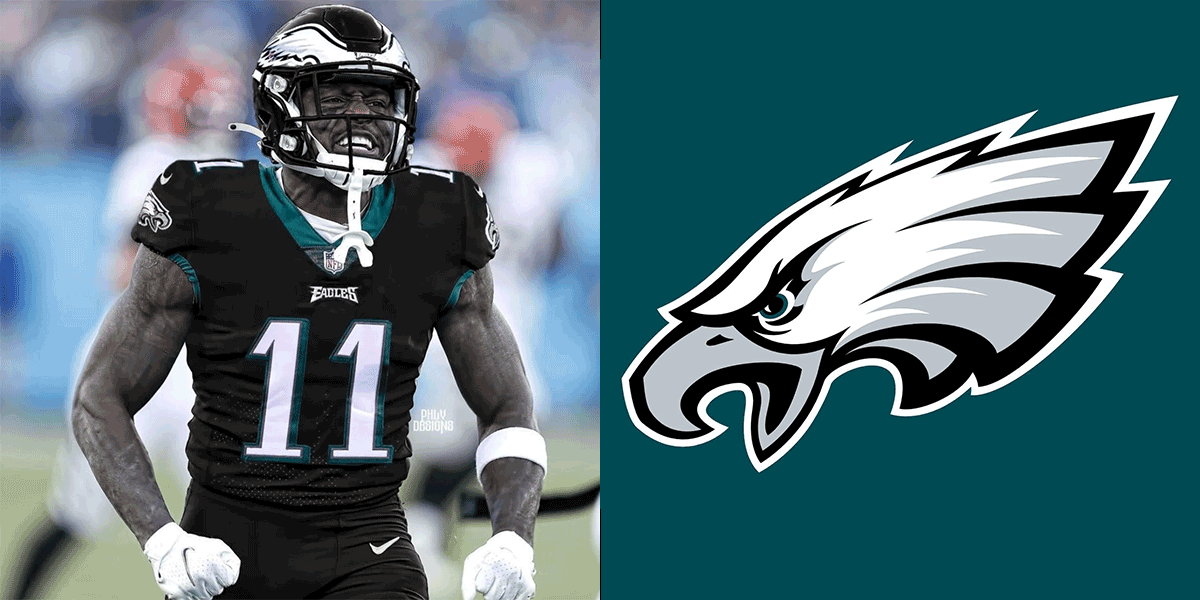 The Philadelphia Eagles pulled off the biggest trade of the first night of the NFL Draft when they gave up the 18th overall pick, and the 101st overall pick (a third-rounder) to acquire one of the best young receivers in the league in A.J. Brown. The Eagles then doubled down on the move and committed to Brown, locking him up for the foreseeable future. 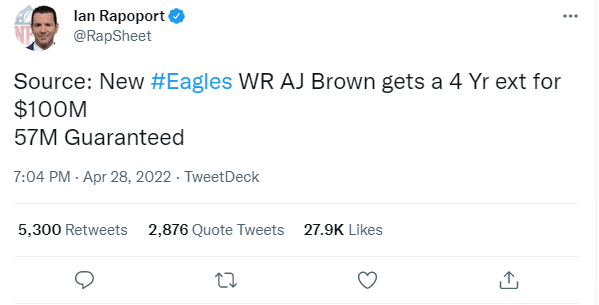 This move has huge fantasy ramifications for 2022 (and beyond) not just for A.J. Brown, but also for DeVonta Smith, Dallas Goedert, Jalen Hurts, and Jalen Reagor (just kidding, Reagor was toast regardless of this trade). Using some of the tools available to us with Fantasydata.com let's dig right into it, starting with the least impacted of fantasy-relevant players to the most impacted such players on the Eagles roster.

After Zach Ertz was traded to the Arizona Cardinals after Week 6 last year Dallas Goedert secured a 25.8% target share through the remainder of the season, while seeing his fantasy scoring increase almost a full 2 points per game from 9.7 to 11.6 points per game. This was by far Goedert's most productive and fantasy-relevant season, and he finished as the TE8 on a per-game basis. The Eagles rewarded him by signing him to a $57 million deal and locking him up through the 2025 season. It's hard to see a path for Goedert to maintain this level of usage, let alone improve upon it, with the addition of Brown to the Eagles roster. Goedert has gone from the first or second option in the offense to the third option in the offense in less than a year's time.  There is an argument to be made that the addition of Brown will open up the middle of the field for Goedert, but the law of conservation of targets almost ensures that Goedert won't see at least a 20% target share in 2022. Considering that he needed a 25% share to score a modest 11.6 fantasy points from Week 6 through Week 18, there's little chance that Goedert finishes the 2022 season as anything more than the TE8, unless of immense touchdown scoring regression. A TE8 season is fine, it just doesn't move the needle, so I'll fade Goedert in drafts unless he falls to me in the middle rounds.

Same As It Ever Was?

The move from the run-heavy Titans to the more run-heavy Eagles may seem like a lateral move for Brown, but there's reason to believe that the Eagles will look to throw more often in 2022. In 2021 both teams relied heavily on the rushing attack, with the Titans typically leaning on one back, Derrick Henry when healthy, while the Eagles spread the love with four running backs attempting between 68 and 137 rushing attempts, while Jalen Hurts led the team with 139 attempts. The Titans 32.1 rushing attempts per game led the last year while the Eagles finished second with 31.5 attempts per game. Conversely, neither offense was pass-centric with the Eagles attempting the 4th fewest passes per game while the Titans attempted the 7th fewest passes last season. Even if we are to assume that this is only a lateral move Brown's history in a similar offense should be cause for optimism. In Brown's three seasons he's ranked 47th, 30th, and 30th in targets per game, while ranking as the WR30, WR6, and WR24 in points per game. Brown's raw targets are a reflection of the offense he's been tied to and not a reflection of his ability to attract targets. His "worst" target share during his first three seasons came in during his rookie year in 2019 when his 19.5% target share still lead the Titans. In 2020 Brown's 25.9% target share was the ninth highest for wide receivers, and in 2021 he again ranked ninth with a 27% target share. Any receiver that receives over a 20% target share is in contention for a WR2 season, when they start approaching or exceeding the 25% share WR1 seasons are within range.

Though it may be easy to look at the Eagles offense last year and just assume they will continue their run-heavy ways the fact that they traded for Brown, and handed him a $100 million contract indicates the opposite is true. Even though the Eagles ended up as one of the lowest passing volume offenses in 2021, that's not completely indicative of the offense they wanted to run. During the first seven games of the season, they averaged 34.7 pass attempts per game which would have ranked 16th in the league over a full season. Teams don't draft receivers in the first round one year, as the Eagles did by drafting Smith 10th overall in 2021, then trade away a first-round pick for another receiver the following year while handing out over $150 million to their receiving options (Brown and Goedert), only to turn around and run a ground and pound offense. I realize that coming to this conclusion means taking a short walk down narrative street, but all signs indicate that the Eagles will increase their passing volume in 2022, and will be able to support multiple viable fantasy options. Now we just need to figure out who will be the WR1 between Smith and Brown.

While Brown has consistently dominated targets since entering the NFL, Smith's rookie season gave many fantasy players reason to hope that he too could develop into a WR1 and perhaps garner the same type of elite target share that Brown has seen over the past couple of seasons. Smith finished his rookie campaign as the WR36 with an impressive 22% target share in 2021. Though Smith's target share is certainly impressive for a rookie, we can dig even deeper into targets to determine how vital a wide receiver is to an offense. The tool we can use to help determine if a wide receiver is earning or demanding targets while on the field is Hog Rate, which is based on targets per snap. Why does this matter? Simply put, two different receivers from different teams may not play the same number of snaps. There are various reasons for this discrepancy, from the type of offenses each player plays in, injuries, and such, but utilizing Hog Rates helps allows us to fairly compare how often each of these receivers is targeted compared to the number of snaps they play. In short, this allows us to determine if a receiver is the focus of his offense when he's on the field. For example, A.J. Brown played on 70% of his offense's snaps last year, while Smith played on 82.4% of the Eagle's offensive plays. Brown's Hog Rate of 18.3% ranked seventh for wide receivers last year, while Smith's 11.7% Hog Rate ranked 60th at the position, and just barely edged out Goedert's 10.32% Hog Rate. Brown is the definition of a target hog, while Smith just simply is not.

Brown is the more efficient wide receiver as well, his 2.72 yards per route ranked 7th in the league compared to Smith who ranked 15th with 2.15 yards per route. Brown's 8.27 yards per target was also within a respectable distance of Smith's 8.89 yards per target, especially considering that Smith's aDOT was 14.4 and Brown was much lower with an aDOT of 11.0. Again despite that sizable difference in average depth of target Brown still averaged 13.8 yards per reception, again within hailing distance of Smith who averaged 14.3 yards per reception. Of the two Brown is also the better receiver in contested catch situations, with a 52% contested catch rate, to just 32% for Smith. But don't take it from just me. The guru of wide receiver route running also pointed this out on Twitter after the trade went down.

After charting DeVonta Smith I'm really bullish on how he and AJ Brown form a complementary duo.

Both guys separate well but Brown brings juice in the YAC and contested catch areas where Smith was not as great as a rookie.

Even though I expect the Eagles pass attempts to rise significantly, it's not probable that both Brown and Smith will hit their respective ceilings. Forced to choose between the two players, and their respective range of outcomes, I'd be on A.J. Brown finishing the 2022 season as a top 12 wide receiver, while Smith finishing in the WR2/3 range.

Before injuring his ankle last season, Jalen Hurts was putting up absurd fantasy numbers. Even after his injury impacted his performance he still finished as a top ten scoring quarterback for fantasy.

But he was averaging nearly 25 fantasy PPG through Week 11, prior to suffering an ankle injury that limited his rushing

He led QBs in rushing yards and TDs and just added AJ Brown. Def has THE QB1 potential

What might cause some worry though is how he got there. As the Tweet below shows, Hurts relied heavily on his rushing yards, and rushing touchdowns for his production. A full 18% of his fantasy scoring derived from his rushing touchdowns, which makes sense since he rushed for 10 touchdowns. This is an area we should expect to him see regression considering those 10 rushing touchdowns are tied for the seventh-most in the history of the NFL for a quarterback. In the history of the NFL, a quarterback has rushed for 10 or more touchdowns 11 times, and only nine human beings have ever accomplished the feat (Cam Newton has had three such seasons).

Jalen Hurts scored 42% of his fantasy points in 2021 off of rushing production. pic.twitter.com/sxoi15TIEo

If you play in leagues where rushing touchdowns count as 6.0 fantasy points and throwing touchdowns count for 4.0 fantasy points, if Hurts throws for more touchdowns than last year while rushing for fewer touchdowns it will have a direct negative impact on his scoring. Lucky for us there's also ample room for touchdown throwing regression as Hurts only threw for 16 touchdowns, and ranked 23rd in the league in touchdown rate with a very bad 3.7% rate. Hurts also lead all quarterbacks in 2021 with 784 rushing yards, while he passed for just 3,144 which ranked 21st at the position. Most fantasy leagues give 0.04 per passing yard, while scoring 0.10 per rushing yard, meaning a rushing yard is worth more than a passing yard, with 10 rushing yards equaling 1.0 fantasy point, and 10 passing yards equaling 0.40 fantasy points. The divide only widens in point per carry leagues. But again because of how few yards Hurts threw for in 2021, he can make up any lost scoring from rushing if he increases his passing yards significantly.

There's also the distinct possibility that the addition of Brown just opens up additional running lanes for Hurts and he still rushes for an absurd number of yards and touchdowns next season, and is unable to support multiple viable receiving options in fantasy. Of all the players on the Eagles who will be have their fantasy production impacted by the addition of Brown, Hurts is the only one I feel comfortable definitively stating will see an increase in fantasy scoring. Either he improves as a passer and see's regression in passing yards and touchdowns, or he continues to be a running savant and smashes that way. Even if Hurts doesn't improve as a passer there is little to no chance the Eagles move off of him in 2022 as their starter with pop-gun armed Gardner Minshew as their backup.