5 Reasons Jamison Crowder Will Thrive with the Jets

Does NFL Free Agency excite you? If it doesn't how can you call yourself a fan of the game. NFL Free Agency is an event where your favorite teams upgrade their roster at key positions. You have many questions swirling in your mind. How does it change the player's fantasy outlook this upcoming season? Will it affect the player's average draft position? Is this a player I want to target in fantasy drafts? Is this a player I should avoid? I will answer those questions and more. This article will share five reasons Jamison Crowder will thrive with the Jets in 2019.

NFL Network reporter Mike Garafolo broke the news that former Washington Redskins wide receiver Jamison Crowder signed a three-year, $28.5 million contract with the New York Jets. The fourth-round pick from the 2015 NFL Draft will see $17 million fully guaranteed. This free agent class of wide receivers has been unexciting. Crowder was able to capitalize on the current trend of NFL offenses prioritizing slot receivers are factors that led to his first big payday. Did you know that he has career earnings of a little over $4 million?

No other Jets wide receiver will see as many guaranteed dollars as him.

Quincy Enunwa recently signed a four-year contract extension worth $33.4 million. He will make only $2.8 million this season. Enunwa's salary will increase to $7.8 million in 2020, $9.6 million in 2021, and $11.4 million in 2022. His salary in 2020 is guaranteed for injury only and becomes fully guaranteed on the fifth day of the league year. Did you know that Enunwa's contract also features $10 million in guaranteed money and an additional $20.25 million in total guarantees? The structure of this contract provides the Jets front office with a ton of flexibility given Enunwa's injury history. The more games he plays the more Enunwa has the potential to get paid.

Robby Anderson's issues off the field have impacted his earning potential. He was officially tendered earlier this month and the Jets gave Anderson a second-round qualifying offer. He's locked into a one-year, $3.1 million contract.  It remains to be seen if Anderson can parlay a productive 2019 season into a career-defining payday.

The Jets coaching staff will want to see an immediate return on their investment from Crowder. And now, you're thinking that he has only averaged 10.3 PPR fantasy points per game in 56 career games. Here's the interesting part about Crowder's production:

2. The Statistical Tip of the Iceberg

Crowder's per game production on the surface does not look like much. One takeaway is his positive receiving fantasy points over expectation relative to the target volume.

Crowder's most productive season was back in 2016 in which he played all 16 games, averaged 12.1 PPR fantasy points per game, and had his highest receiving fantasy points over expectation. He has been very efficient in his first four seasons considering the number of targets he's seen per game.

Expected points (EP) and fantasy points over expectation (FPOE) are very useful to review. EP is based on the average fantasy point value of plays in similar down, distance, and field position instances. Receiving FPOE, on the other hand, takes into account a wide receiver's actual fantasy points and takes out the expected points. EP measures volume while FPOE measures efficiency.

Crowder's durability is a concern. The 25-year old receiver only played in nine games in 2018 after being limited by ankle injuries. He's also dealt hamstring, back, hip, and groin injuries. Crowder will be in a position with ascending quarterback Sam Darnold to set new career highs in multiple statistical categories in 2019.

Darnold went through the same struggles of many first-year players. He averaged 32 pass attempts, 220 passing yards, 1.3 touchdowns, and 1.1 interceptions per game. Darnold's completion percentage on passes one to 15 yards last season ranked last in the NFL. His quality of play and production improved the final four games of the season. Darnold averaged 233 passing yards and 19.1 fantasy points per game during that span. Did you know his Pro Football Focus grade increased from 51 from Week 1 through 13 to 88 from Week 14 through 17? 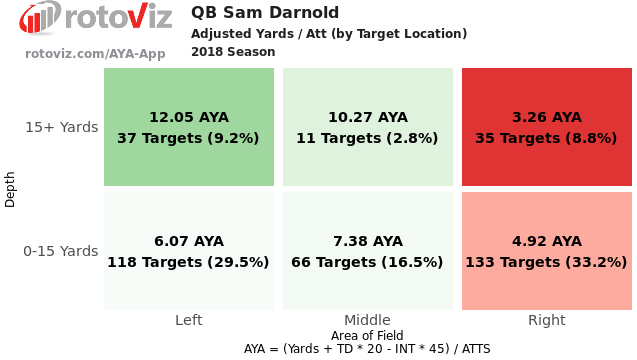 Jermaine Kearse was the Jets slot receiver in 2018. He finished with 76 targets (second most targets on the team), 37 receptions, 371 receiving yards, one touchdown, and negative receiving fantasy points over expectation across 14 games. Crowder will improve the Jets slot receiver production. He is reliable catching the football which will help elevate the play of Darnold. Crowder could lead the Jets in targets based on the history of new head coach Adam Gase's offensive schemes.

4. The Curious Case of Adam Gase

Gase was once viewed as an offensive guru, innovator, and mastermind after his time as the quarterback coach and offensive coordinator with the Denver Broncos from 2010 to 2014. He was Sean McVay before Sean McVay.

The Broncos offense set numerous records back in 2013:

Was Gase's success in 2013 and 2014 a byproduct of having future Hall of Famer quarterback Peyton Manning? The NFL team rankings of Gase's offenses with the Chicago Bears and Miami Dolphins confirm that.

Gase will enter his first season as head coach with a promising young quarterback with an excellent supporting cast including Enunwa, Anderson, tight end Chris Herndon, and running back Le'Veon Bell. The quarterbacks in his offensive schemes have leaned heavily on slot receivers.

Gase has always been very creative as a play-caller and makes adjustments quickly based on what opposing defenses give him. The Dolphins led the NFL in winning percentage in one-score games since Gase was hired in 2016 according to ESPN's Cameron Wolfe. The Jets lack a true No. 1 receiver. Enunwa has the skill set to line up all over the field and Gase has mentioned publicly about not putting him "in a box." Anderson is expected to threaten defenses vertically considering he's accumulated 1,400 or more air yards in each of the last two seasons. It is possible that Crowder with his very good route running ability and agility along with Enunwa could split time between being lined up on the outside and in the slot. Bell will also be leveraged as a receiver. He has averaged 6.4 targets, five receptions, and 43 receiving yards per game in his career along with positive receiving fantasy points over expectation. Darnold has offensive weapons at every position that defensive coordinators will have to be accountable for. The Jets offense has a number of receivers to feed targets, but Crowder will see enough to set a new high in PPR fantasy points in 2019.

Crowder was the 105th selection in the 2015 NFL Draft and is entering his fifth season. The average career length of a player according to the NFL Players Association is about 3.3 years. Finding success is even more challenging for drafts picks outside of the first four rounds. There are a number of wide receivers selected at No. 100 or later in the NFL Draft since 2000 who have had similar statistical production (targets, receptions, receiving yards, and touchdowns) to Crowder their first four seasons.

This list includes names you may recognize such as:

You must be wondering how these players performed in their fifth season.

The number of targets Crowder averages per game and games played will dictate if he has the type of season that Doug Baldwin had back in 2015. This provides you with a realistic ceiling, but Crowder has a high floor as well.

Targets are very predictive for wide receivers. All of the stars are aligning for Crowder to see the largest target share of his career. The biggest risk is how Gase uses Bell as a receiver out of the backfield. According to Fantasy Football Calculator, the first Jets wide receiver being drafted in 12-team PPR formats is Anderson. His average draft position or ADP is in the seventh round. Crowder is currently available in the double-digit rounds and his ADP will fluctuate as we head into the summer. He can currently be viewed as a WR3 with upside in PPR formats. Crowder already has two top-36 fantasy finishes in his career. Could he break into the top-20 in 2019?

Do you agree or disagree? What did you find most useful? Thanks for reading and please sign up for FantasyData Premium.

Previous Article Fantasy Breakdown: Why Size Matters At The RB Position
Next Article 3 Reasons You Should Draft Tyler Lockett in Fantasy in 2019