Los Angeles Rams wide receiver Cooper Kupp was outstanding last season. Kupp had 145 catches for 1,947 yards and 16 touchdowns across 17 games. He was named AP Offensive Player of the Year and was the Super Bowl MVP for the Rams. It was a season almost unheard of by wide receiver standards. So how does he follow it up? Robert Woods is now in Tennessee with the Titans, and Odell Beckham Jr. is likely heading to another team in free agency. The Los Angeles Rams brought in Allen Robinson, and he will make an excellent replacement for Woods and Beckham. But Kupp will still be staffing the slot for the offense. The connection Kupp has already formed with Matthew Stafford has become something of amazement. All NFL teams would love to have a quarterback and wide receiver duo who love each other as much as these two. This connection will not be broken by adding even more weapons into the mix. Allen Robinson has been a number one alpha receiver for his entire career. In this offense, Robinson knows what his role is. To be a dominant number two in a good offense. This means Kupp and his place are secure. The No. 1 fantasy wide receiver in 2021 has a great chance to repeat the feat in 2022. Kupp's career year in 2021 might not be reached, but the 2022 stats could get close to the same. And in all fairness, he has done it once. So why not again? Kupp is the WR 1 for fantasy in 2022. This is deserved and expected. Barring any unforeseen circumstances, he will again be a top-three player at the position. Kupp is well worth a first-round pick in fantasy drafts. 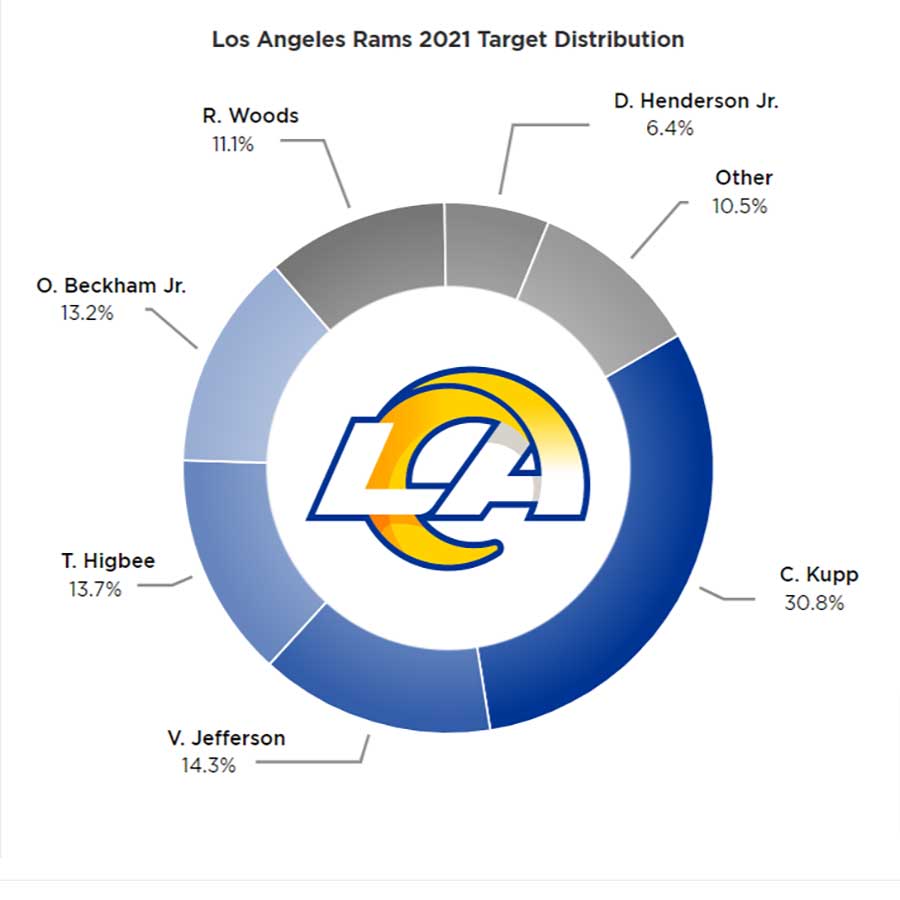 Justin Jefferson Fantasy Outlook: A Young Star Continues To Rise In The North

Minnesota Vikings wide receiver Justin Jefferson had a remarkable rookie season in 2020. After 88 receptions, 1,400 yards, and seven touchdowns, the pressure was one for him to improve. And improve, he did. While playing in all 17 games, Jefferson had 108 receptions for 1,616 yards and 10 touchdowns. He was the main target for quarterback Kirk Cousins and was able to keep the offense afloat during weeks when Adam Thielen missed games due to injury. Coming into year three, but under a new head coach, it will be essential for him to keep things going. It is good to know his new head coach Kevin O'Connell was the offensive coordinator for the Los Angeles Rams and Cooper Kupp last season. So, there is the potential for an even better season in 2022 than he ever had in 2021. Although Dalvin Cook is there and Thielen is now healthy, Jefferson has taken over as the main cog of the offense in Minnesota. When the team needs a big play, they know where to get it. Jefferson. Finding a place to select him in fantasy drafts will be difficult. If you have an early first-round pick, this is too early to select him. On the other hand, he will likely not get back to you in the second round. If you want him, you will need to grab him there. This said, he is not worth more than the elite running backs. Wide receivers are more readily available. Your best bet of getting Jefferson is to have a late pick in the first. You can grab a running back and then get Jefferson early in the second. Or even reverse the order and select Jefferson in the first. While Kupp and Davante Adams are the number one and two wide receivers to be drafted, Jefferson should be in a fight with the likes of Tyreek Hill and Stefon Diggs for the next man up. You cannot go wrong with either one of these players. But with the offense surrounding him and the potential of Jefferson under a new head coach, he could and possibly should be your choice as the number three receiver in fantasy drafts. 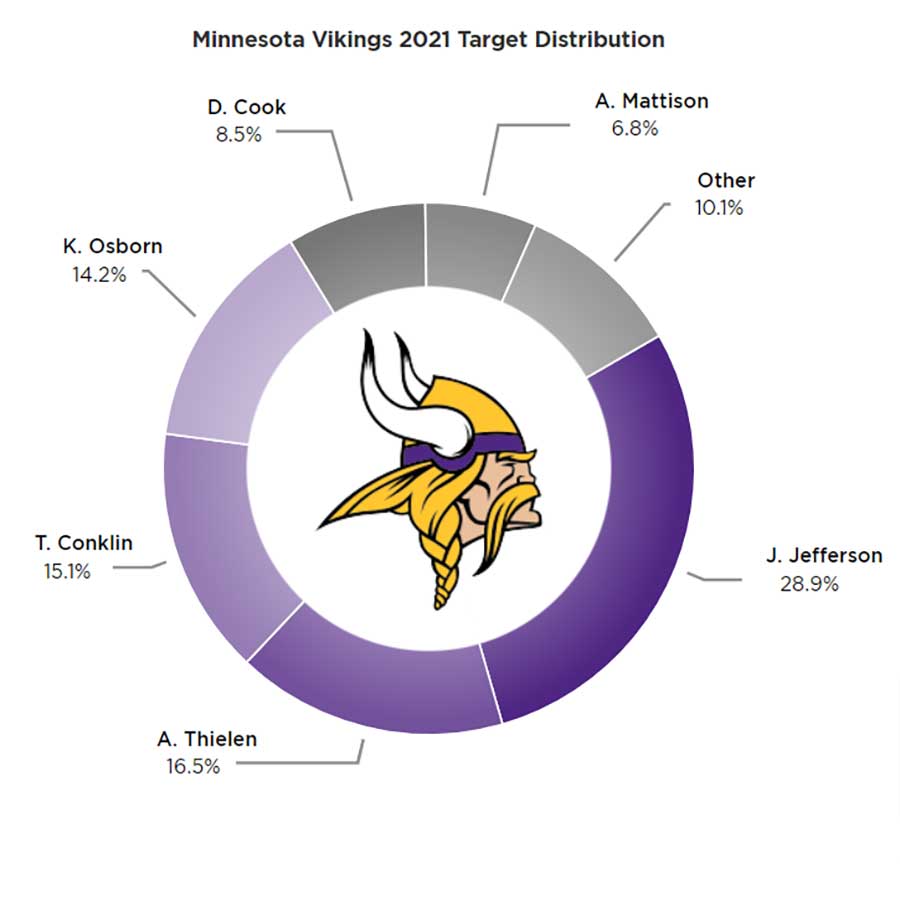 Cincinnati Bengals wide receiver Ja'Marr Chase met all expectations and then some in his 2021 rookie season after being the No. 5 overall pick in the draft. Chase finished with 81 catches for 1,455 yards and 13 touchdowns while also setting the single-game rookie receiving record with 266 yards in Week 17. Chase is primed to build upon his debut season success in 2022 on a Bengals offense that is set to explode this upcoming year. Cincinnati invested significant resources into fixing an offensive line that struggled in 2021, bringing in La'el Collins, Ted Karras, and Alex Cappa to protect star quarterback Joe Burrow. An improved offensive line will allow the Bengals to play faster on offense and give Burrow more time to find his pass catchers down the field. Chase is being selected towards the end of the first round in fantasy drafts and is worth a look even earlier than that if fantasy managers want to build around star pass-catchers in 2022. 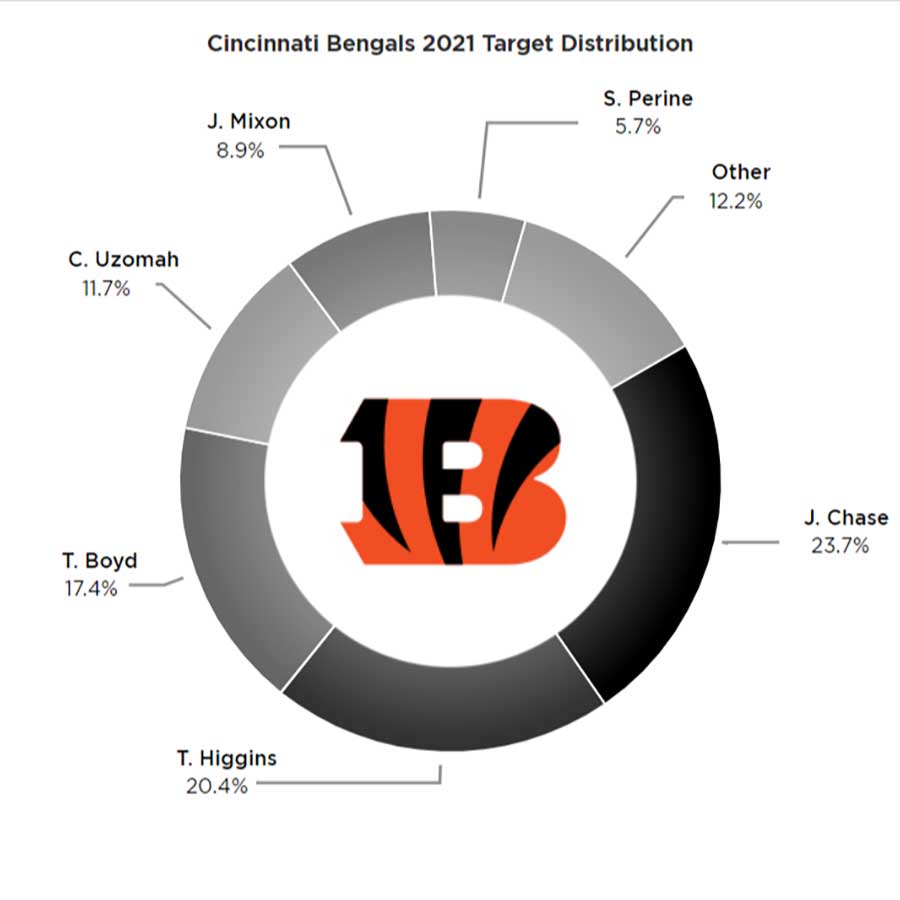 Stefon Diggs 2022 Outlook: Another Shot At The Overall WR1

After being the surprise overall WR1 in 2020, Stefon Diggs came down to earth a bit last year. He still managed to finish as the WR7, but fantasy managers did not quite get what they paid for. Last year, his stat line totaled 103 catches for 1,225 yards and 10 scores. It is not common that a player with 10 touchdowns could be seen as a candidate for positive touchdown regression, but Diggs' advanced metrics would suggest otherwise. He had 23 end zone targets, which was easily the best in the league. However, his ratio of touchdowns to end zone targets was only 41.7%. The average ratio of touchdowns to end zone targets for the top 50 target leaders in 2021 was 75.7%, indicating that Diggs left some tremendous scoring opportunities on the table. Getting a high quantity and quality of targets in a great offense gives Diggs as much upside as anyone at the position. With the trades of Davante Adams, Tyreek Hill, and A.J. Brown, Diggs is rock-solid toward the top of the fantasy wide receiver ranks and could be a sneaky candidate to repeat his 2020 performance. 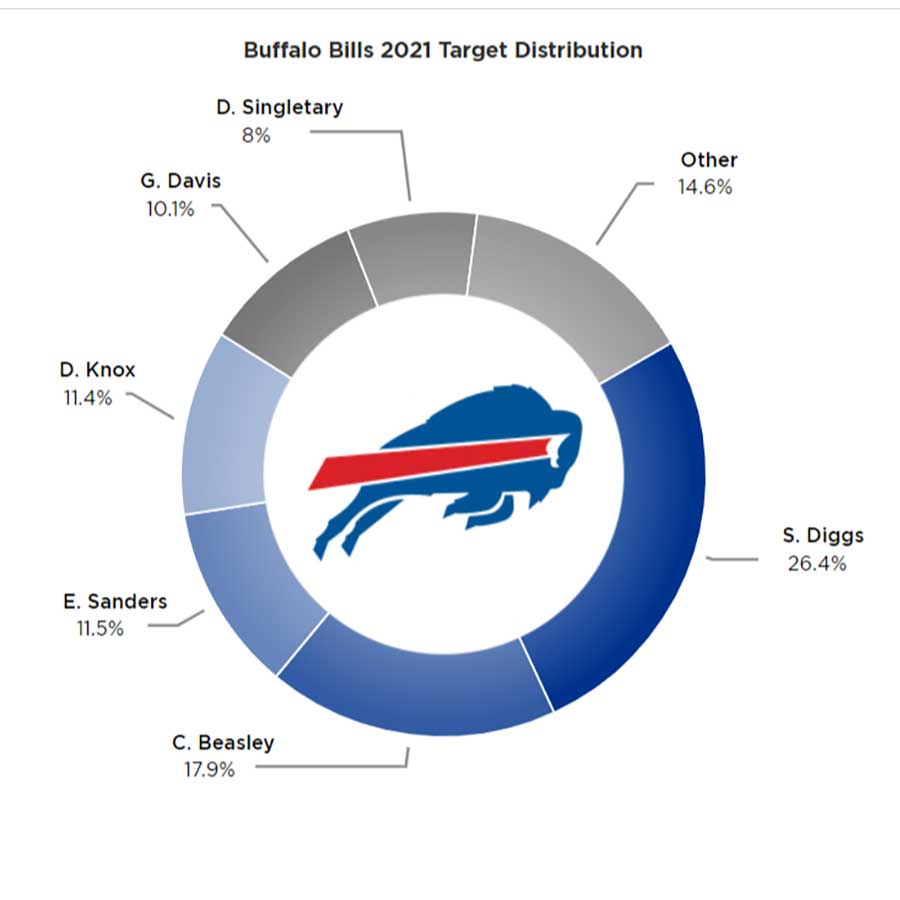 In his first three seasons as a starter for the Raiders, Darren Waller has always been Derek Carr's number one option in the passing game. He's averaged 8.4 targets per game across 46 fully healthy games. But 2022 will be different. Not only did the Raiders trade for one of the best receivers in the league in Davante Adams, but they also have an ascending homegrown talent in Hunter Renfrow. Last season, Waller, Adams, and Renfrow combined to average nearly 27 targets per game. Luckily for all three guys, the Raiders did throw the ball almost 37 times per game last season. There's a new coaching staff this season with Josh McDaniels at the helm, but the Raiders are still likely to be throwing a lot given the high-powered offenses in the AFC West. The target funnel is sure to be narrow, with the next best receiving options being Demarcus Robinson and Keelan Cole Sr., but we should expect to see some regression from all three of the top pass-catchers, including Waller. By default, Waller isn't going to average 8.4 targets (and 1.5 red zone targets) per game like he has the last two seasons, but he still shouldn't have any trouble producing as a mid-range TE1. In 2021, we were talking about Waller competing with Travis Kelce for the overall TE1 spot. In 2022, Kelce, Mark Andrews, Kyle Pitts, George Kittle, and maybe even Dalton Schultz could all realistically finish higher than Waller. 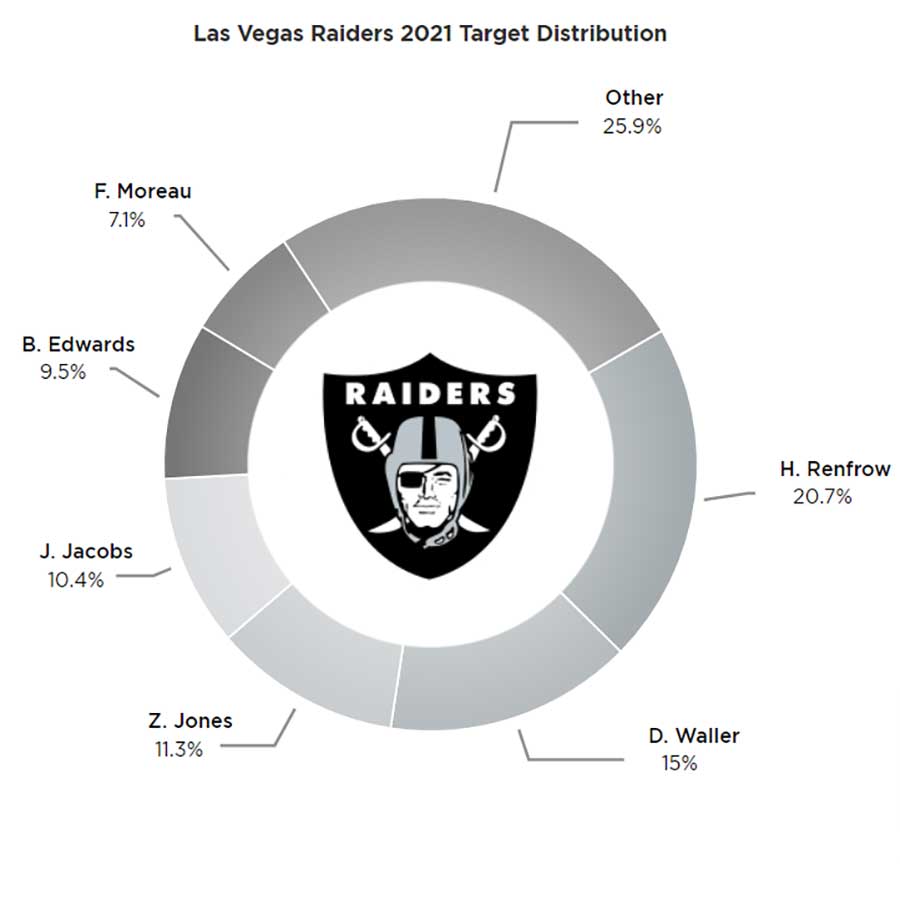