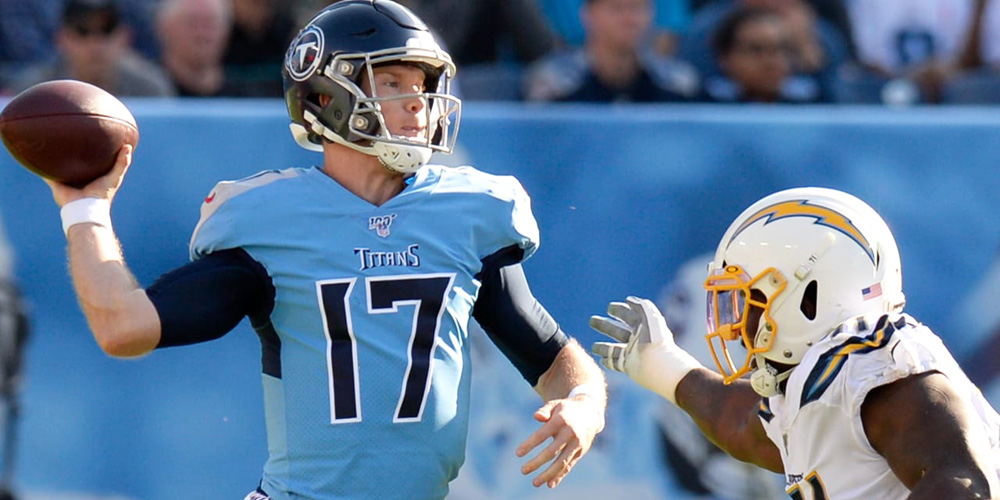 The fantasy football playoffs continue! Time to keep the train rolling through the waiver wire. This will not only be useful to those who are looking for options in Week 15 but for those looking ahead to the Week 16 championship! This list compiles players available in most leagues on Yahoo.com! Remember dominating the waiver wire is crucial to your fantasy football league. So get that FAAB budget (or what's left) ready to spend on some waiver wire pickups for Week 15! Let's get after it!

Less Than 48% Owned in Yahoo Leagues

I have failed to buy into the success of Tannehill because he has in the past struggled on the road. But since Week 7, he has been the second-best fantasy quarterback behind Lamar Jackson and with the Houston Texans up next week, he is a must-start top-ten option at the quarterback position. He only has one game below 14 fantasy points and at home, he has been absolutely dominating. He plays Houston at home and they have allowed the second-most fantasy points per game to the quarterback position over the past four weeks.

Less Than 3% Owned in Yahoo Leagues

Manning was able to do enough on Monday night football throwing two touchdowns for 203 yards. His two touchdowns were hookups with rookie Darius Slayton which went for 36 and 54 yards. Manning gets the Dolphins at home this week, so if 18 points is a floor on the road versus Philadelphia he should see at least 20 fantasy points versus Miami.

Always be aggressive from the waiver wire with running backs. With injuries so common at the position you never know when a back-up running back will find himself very quickly into a bell-cow workload. In this case, it is also worth it to be proactive with speculative adds to backups with injuries to starting running backs. Especially as we are now concluded with the bye-weeks. This week's backup running back to target includes DeAndre Washington!

Josh Jacobs is dealing with a fractured shoulder and Washington took on the bell-cow role in his absence. He rushed for 53 yards and one touchdown and added six receptions for 43 yards for 20 total touches. If he is the lead back again in Week 15 Washington should absolutely smash against the Jacksonville Jaguars who have allowed the second-most fantasy points to backs over the past four weeks. Washington's six receptions were twice as many receptions as Jacobs so in any game this season.

Less Than 51% Owned in Yahoo Leagues

We were not sure necessarily how the 49ers backfield would shake up with the return of Matt Breida. Mostert led the backfield again with 12 touches and should be the back going forward. He has a good matchup versus the Atlanta Falcons in Week 15.

Laird saw 19 touches in Week 14 versus the Jets totaling 86 yards with four receptions. He was much more productive than Kallen Ballage was with his touches so Laird is a low-end FLEX play. Especially with the Dolphins having injuries pile up at receiver with both DeVante Parker and Albert Wilson leaving the game with concussions. He could see more pass-work with Miami limited on pass-catchers. 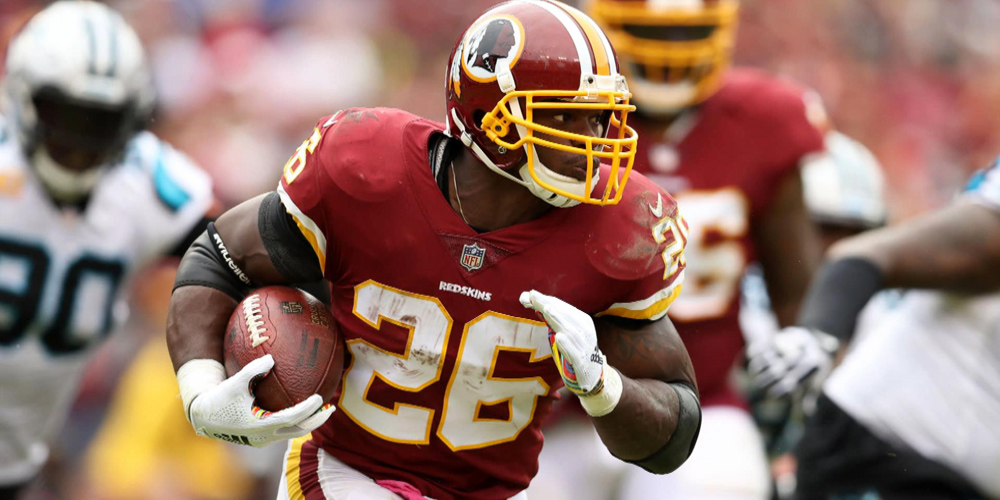 Derrius Guice has already been ruled out for Week 15, leaving Peterson the main back in Washington. He rushed 20 times for 76 yards and a touchdown in Week 14 against the Packers. He gets the Eagles in Week 15 which is less than ideal matchup, but he is guaranteed the volume with no Guice.

Le'Veon Bell missed the Week 14 matchup versus the Dolphins but seems to have checked out of New York at this time. In his absence, Powell had 21 touches, but ending up injuring his ankle late. At this point, all we know whoever the starting running back for the Jets is will get the majority of at least 15 touches. The Ravens are allowing 5.1 yards per attempt at home this season which is second-highest in the NFL. So if the Jets do decide to run the ball, whoever the "starter" is will be a low-end RB2 volume play. Devin Singletary was able to do damage versus the Ravens' defense going over 100 yards from scrimmage on 23 touches.

Receivers are much more volatile by nature, so consider asking yourself how often you will start this receiver you bid aggressively on the waiver wire?  Understand how you will use this player when they are added to your roster. Are you adding them to start them in Week 15 or Week 16? This can help determine priorities when addressing the waiver wire.

Less Than 26% Owned in Yahoo Leagues

I really liked Brown in this spot in Week 14 and he delivered in a big way. Over 150 yards and two touchdowns in his matchup versus the Raiders, I would blow whatever FAAB I have left to add this guy to your team. According to Pro Football Focus, since Week 7 Brown ranks number one in yards per route run (2.96) of all NFL wide receivers. Better than Michael Thomas (2.86), Robert Woods (2.75), Julio Jones (2.69), and Mike Evans (2.65). With the Texans up next Brown is a WR2 play at worst. He has a 21% target market share since Week 7.

I really like A.J. Brown this week with no Humphries. He leads Titans in targets since Tannehill over and Raiders D = 🗑

Less Than 35% Owned in Yahoo Leagues

Zach Pascal caught five of nine targets for 74 yards and a touchdown in the Colts’ loss to the Buccaneers. He is playing at New Orleans in Week 15 but he is the number one receiver on the Colts with all their injuries so he should see the volume. The Saints were absolutely roasted by wide receivers Deebo Samuel and Emmanuel Sanders just last week.

Perriman has seen 11 targets over the past two weeks with at least 70 yards receiving in each game with a touchdown last week. Mike Evans looks to be on the shelf for the remainder of the season pushing Perriman into a starting role. Perriman is second on the team in routes run over the last two weeks and leads the team in yards in that time span. You have to love the matchup in Week 15 versus the Detriot Lions who have allowed the sixth-most fantasy points to wide receivers over the past four weeks. Justin Watson is also extremely enticing as an add because he saw the direct boost after Evans left with eight targets in Week 14.

With the departures of both Albert Wilson and DeVante Parker, Ford stepped up big for Ryan Fitzpatrick catching six of nine targets for 92 yards. If he is the number one option in the passing game he could easily have a solid game versus the Giants who have been the second-worst team versus wide receivers this season. Allen Hurns (1% owned) is also a nice addition because he has seen the full complement of snaps since Preston Williams went down. Hurns over the past four weeks averaged six targets per game with just under 50 yards receiving. Hurns led the team in routes run and had seven targets in Week 14.

Less Than 9% Owned in Yahoo Leagues

Again another wide receiver addition due to an injury Calvin Ridley left his game with an abdominal injury, so Gage would immediately see a benefit in the passing game as he has done when other Falcons receivers have missed time.

D.J. Chark is looking to be out the next few weeks so it appears that Conley would find himself in a starting role. Conley was second on the team in routes run behind only Chark and he comes with big-play upside with a juicy matchup in Week 15 against the Oakland Raiders.

Less Than 26% Owned in Yahoo Leagues

It does not seem to matter who the quarterback is Slayton continues to command targets in the Giants offense. He had a season-high 154 yards and two touchdowns in the Giants Monday night football loss to the Eagles. He has now seen at least seven targets in four of the last games and draws the Miami Dolphins in Week 15 in a plus matchup.

No tight end has run more routes over the past two weeks than Gesicki. However, this did not translate in Week 14 where he had just one catch for six yards. The matchup is also tough versus the Giants who have been one of the best teams versus the tight end, but with Miami, down pass catchers, Gesicki might be forced into more involvement.

Higbee now has 19 targets over the past two weeks and if Gerald Everett misses next week, there is no reason to not go back to Higbee versus Dallas. Dallas has allowed the sixth-most receptions to the tight end position.

Less Than 37% Owned in Yahoo Leagues

Njoku ran just nine routes in Week 14, but on those nine routes, he had three targets. Bodes well for a bigger workload versus the Arizona Cardinals who he should dominate against based on the matchup.

Less Than 32% Owned in Yahoo Leagues

Similar to the Buccaneer's wide receivers, Howard has seen an uptick in work with the departure of Mike Evans. He ranks third in routes run on Tampa Bay and has 11 targets over that time span. He draws the Lions in Week 15.

Less Than 1% Owned in Yahoo Leagues

Thomas has run the second-most routes at the tight end position over the past two weeks and was productive in Week 14 in the absence of Greg Olsen. Ian Thomas caught five of his ten targets for 57 yards and one touchdown in the Panthers' Week 14 loss to the Falcons. The matchup next week is great versus Seattle who has been the second-worst team versus the tight end this season and over the past four weeks.