This past week, the Brewers and Mariners optioned Keston Hiura and Jarred Kelenic. With that news, a few hitters benefit that we can consider as Week 12 streamers. We have a loaded week of baseball after only three games last Monday. It's a week with the Rockies playing all seven games at Coors Field and only one team playing five games in the Rangers.

Schoop up Jonathan Schoop as he keeps on hitting, and we'll head back to the well with him in Week 12. Since we're into June and the weather heating up, that should mean more offense on our hands dependent on the team park factors. Most of the Week 12 hitter streamer recommendations are ones to consider in 15-team leagues. Sorry not sorry, but we have a few Mariners hitters to stream in Week 12. The fantasy baseball season is a grind, so keep on churning on waivers and accumulating stats and ratios.

In Week 12, 17 teams play seven games with the Mets playing eight. All other teams outside of the Texas Rangers play at least six games next week. That said, we have the Rockies at home for all seven. Meanwhile, the opposing Padres could feast on the Rockies pitchers in the first half of the week since the Rockies allow the second-worst .335 wOBA. With the Mets, it's about volume with the doubleheader against the Nationals. Both the Blue Jays and Cleveland will face the Orioles pitchers who have struggled outside of John Means who recently hit the IL. The Orioles have the 4th worst wOBA at .331 allowed on the season.

Over the past 14 days, the Rangers have the worst wOBA (.264), meaning their hitters have struggled mightily in recent weeks. The same goes with the Nationals hitters outside of Trea Turner and Juan Soto as of late - the team is struggling to hit. Unfortunately, the Nationals rank second to last in team wOBA (.272) and wRC+ (69) over the past 14 days. Meanwhile, the Phillies and Diamondbacks face two of the top pitching staffs in baseball. With the Dodgers, they allowed the league lowest .276 wOBA and the 5th lowest team ERA at 3.30. The Giants rank 6th best with a 3.31 ERA on the season and the 4th best wOBA allowed at .285.

In May, Jonathan Schoop hit well with a .275 batting average and .745 OPS. Schoop has a hit in six out of the eight games played in June with a .406 batting average and 1.444 OPS. Half of Schoop's ten home runs have come in June, which is quite silly. In June, Schoop boasts a 92.1% Z-Contact%, 78.3% Contact%, and 12.5% barrel rate. When compared to a season-long 88.7% Z-Contact%, almost identical Contact%, and 7.1% barrel rate, Schoop is making more zone contact with better quality of contact. 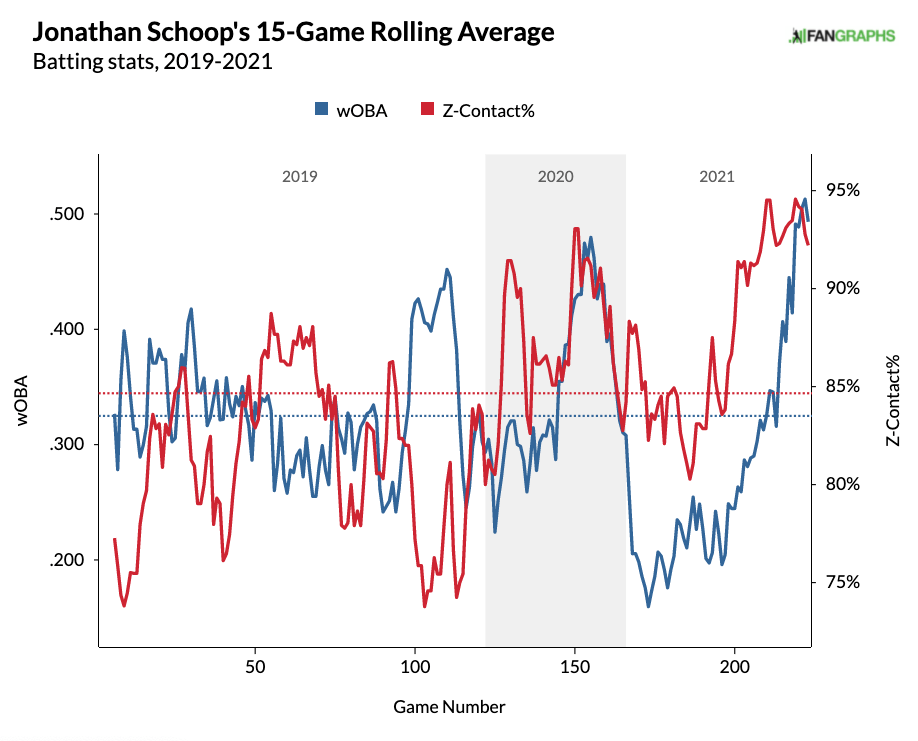 The other Ramirez in Cleveland in Harold Ramirez keeps showing that he's relevant in 15-team leagues. In June, Ramirez has a .412 batting average and 1.156 OPS in five games. He uses an aggressive and contact-heavy approach evidenced by a 40% O-Swing% and 88.7% Z-Contact%. One metric that stands out - Ramirez's 98.1 mph average exit velocity on FB/LD (No. 19) amongst qualified hitters with 50 batted ball events. That's an elite group near Juan Soto and Matt Olson.

With ground ball heavy hitters like Ramirez with a 53.4% ground ball rate, we need hitters to crush liners and fly balls, which he is doing so far. Cleveland faces the Orioles and Pirates for seven games this week. Both team pitchers rank in the bottom eight in team ERA and wOBA allowed. Stream Harold Ramirez as Cleveland hitters should feast in Week 12.

Since the Rockies play all seven games at home in Week 12, we have to find one Rockies hitter that's on the streaming radar. Well, Yonathan Daza is back in our fantasy baseball dreams with a .368 batting average over the past 14 days. I want to love Brendan Rodgers or Garrett Hampson, but we'll pivot to a hitter with a similar profile to Raimel Tapia.

Daza boasts an 86.6% Z-Contact% yet only a 1.7% barrel rate. He relies on the above-average contact rate that's fueled by his .407 BABIP. Remember that Coors Field boosts BABIP with a 1.12 BABIP Park Factor (No. 1) according to EV Analytics. Similar to Harold Ramirez, Daza is a hitter to stream in 15-team leagues.

With Keston Hiura sent down to Triple-A, Kolten Wong injured, and Willy Adames traded, this clears a consistent path for playing time with Luis Urías. The best part - Urías hit leadoff in the past six games heading into Thursday. Over the past two weeks, Urías has a .256 batting average, two home runs, six runs, five RBI, and one steal. The Brewers play four games at Coors Field to finish off the week - love it. Even their three games against the Reds don't look so scary with Luis Castillo (struggling), Tyler Mahle, and Vladimir Gutierrez. Consider streaming Urías in 12 or 15-team leagues this week.

In the week of young hitters optioned, the Mariners did just that with Jarred Kelenic. That opened up playing time for Taylor Trammell and Jake Fraley. Both players should garner interest in 15-team leagues with Fraley as the sneakier one. Since the callup on May 31st, Fraley has two home runs, six runs, nine RBI, and two steals with a .320 batting average. Meanwhile, Trammell has one home run, six runs, and three RBI with a .250 batting average since his callup on June 1st.

The Mariners have three games against the Twins as they project to face Randy Dobnak, J.A. Happ, and Jose Berrios. Then they face the Rays for four, but tougher pitching matchups with the Rich Hill resurgence, Josh Fleming, Tyler Glasnow, and Shane McClanahan. For both Mariners' outfielders, it's about volume with locked-in playing time given Kelenic was optioned down and Kyle Lewis injured. Fraley and Trammell can provide power and speed, particularly in deeper leagues.

Yes, I'm a Mariners fan, but this isn't a homer pick with J.P. Crawford and the previous Mariners hitters mentioned. However, this is more of a deep-league hitter to stream at shortstop or middle infield. Over the past eight games, Crawford moved up to the leadoff spot. During that stretch, Crawford has a .467 batting average with one home run, six runs, six RBI, and one steal.

He possesses above-average plate discipline with a low 22.4% O-Swing% and 90% Z-Contact%. Crawford typically displayed a double-digit walk rate (10.7%), but now he's hitting for a solid batting average with .255 in 2020 and .277 in 2021. He should be readily available in 15-team leagues for batting average, OBP, and runs as their current leadoff hitter.

You know you're old when you see Steven Duggar's name and think of the song - "Teach Me How to Dougie." Anyway, back to baseball as that song plays in my head. Unfortunately, the Giants have an injured list that is full of some regular starters. Keep in mind that Mike Yastrzemski and Alex Dickerson could return in the next week or so. If that's the case, then Duggar loses playing time. It sounds like Yastrzemski should return this weekend and Dickerson could return sometime next weekend in their series against the Phillies.

That said, over the past two weeks, Duggar has two home runs, eight runs, six RBI, and two steals with a .325 batting average. He's barreling up the ball with an 18.2% barrel rate during that stretch. I mostly wanted to highlight the Giants matchups in Week 12 as they face the Diamondbacks and Phillies. With no Madison Bumgarner and Zac Gallen out, it's quite a friendly matchup. A reminder that the Diamondbacks allow a league-worst .338 wOBA on the season. Again, if Yastrzemski and Dickerson return, then I'm less excited about Duggar in Week 12.