***Before we dive into this week's article, I just wanted to let you know that we've slashed the price of our MLB Subscriptions! Save HUGE on our season passes! Enjoy our Player Projections, DFS Tools, and Data at a fraction of the price. This team won't last long, so definitely check it out!  Click Here to Learn More

The theme of this season so far - survive the injuries, make difficult roster decisions, and keep grinding the waiver wire. That's generally the theme and process for success during other seasons, but the injuries seem way up this year. Since I'm mostly playing in 15-team leagues this season, I'm looking at the hitter streamer lens from a deep league perspective.

At this point, we have a good idea of where we sit in the rotisserie standings and where our strengths and weaknesses lie. It seems simple, but use the waiver wire to assess team needs while also assessing upside and potential. As with pitcher streamers, maybe, just maybe, these hitter streamers end up as regulars in your starting lineup. A few from last week and this week include Jonathan Schoop, Harold Ramirez, Luis Urías, Jake Fraley, J.P. Crawford, and Steven Duggar. We'll look back to Week 12 and look ahead to Week 13.

With the Mets and Braves, it's about volume with eight games. The Astros play two of the weaker pitching staffs with the Orioles allowing the 4th highest wOBA at .334 and the Tigers allowing the 10th highest wOBA at .322. With the Orioles, they play at the Blue Jays in Buffalo, which rates as the 10th best in home run park factors per EV Analytics.

With the White Sox, they have friendlier matchups, but the five-game week means fewer plate appearances. The Rockies, Angels, Giants, and Mariners play five games. Meanwhile, the Diamondbacks and Pirates have two of the worst offenses in baseball with a .283 wOBA (No. 28) for the Pirates and .282 wOBA (No. 29) for the Diamondbacks over the past 30 days.

With the Dodgers' injuries to Max Muncy and Cody Bellinger in the past week, Zach McKinstry and Matt Beaty should earn a bit more playing time. Since McKinstry and Beaty bat left-handed, they project on the strong side of a platoon. In Week 13, the Dodgers expect to face six right-handed starters against the Padres and Cubs. The only lefty they will face - Blake Snell, which isn't that worrisome with his massive struggles.

Don't look now, but we have veteran Elvis Andrus hitting fairly well over the past 14 days. During that span, Andrus is hitting .283 with zero home runs, five runs, seven RBI, and one steal. Not super exciting by any means, but Andrus has a hit in five out of the past six games. We're also attempting to find players that we potentially find in 15-team leagues.

The Athletics face the Rangers for four games and the Giants for three games. Dare I say revenge series for Andrus? All kidding aside, the Rangers have the 5th highest wOBA allowed at .329 on the season with the 5th worst ERA at 5.94 over the past 14 days. The Royals don't scare us either since they all the 9th worst wOBA at .323 on the season and the 6th worst ERA (5.91) over the past 14 days. Unfortunately, Andrus hits towards the bottom of the lineup and that will limit the stolen base attempts and RBI opportunities.

Since May 30, Odúbel Herrera moved to the leadoff spot in all but one game. Since that time, Herrera is hitting .317 with two home runs, 14 runs, seven RBI, and one steal. It looks mostly boosted by his .353 BABIP during that time since the rest of the metrics look below average or mediocre. Since May 30, Herrera has a 1.9% barrel rate with an 85.5% Z-Contact%. 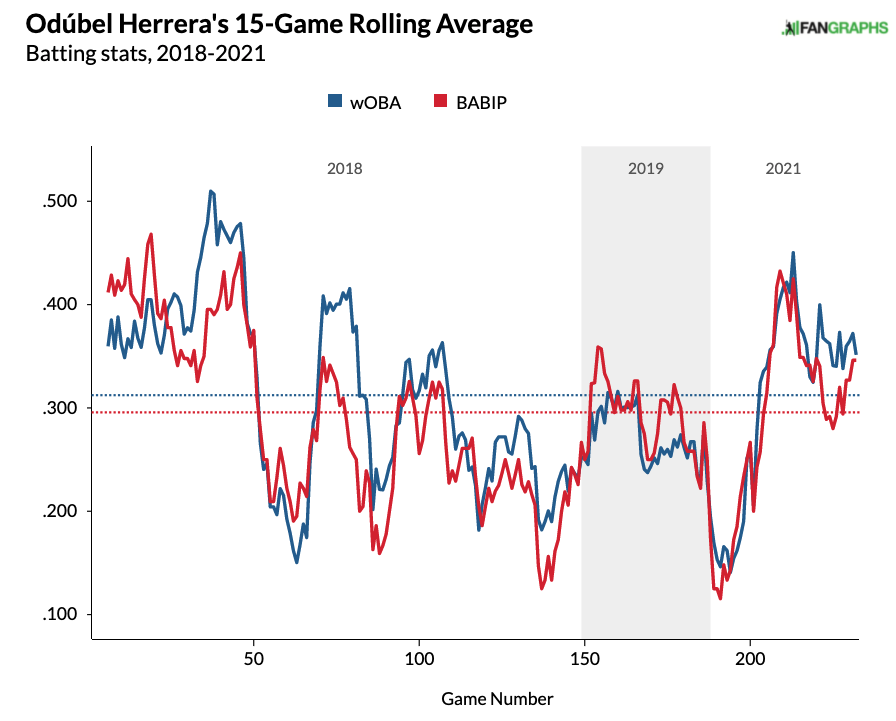 In some situations, it's about matchups while it's about playing time in others. With Herrera, it's a mix of both. The Phillies face the Nationals and Mets for six games total, including a doubleheader against the Mets.

If you check our MLB Lineups page or the RotoWire starting pitcher grid, the Phillies project to face the following pitchers.

Taijuan Walker is the only pitcher to fear. For Erick Fedde, he pitched well in the last start with five scoreless innings. In David Peterson's last start against the Mets, he fared better with six scoreless innings. However, Peterson allowed nine earned runs in three innings of work in two starts prior. If we could find more fantasy-relevant Phillies hitters outside of the typical ones, then we would list more than Herrera here.

Similar to Odúbel Herrera, Jonathan India moved to the leadoff spot recently. Since June 5, India batted leadoff in 11 straight games with a .250 batting average, one home run, eight runs, four RBI, and one steal. Although India cooled off a bit, we like the lineup placement in front of Jesse Winker and Nick Castellanos. Interestingly, the Twins and Braves pitchers haven't performed as well. The Twins have the second-worst wOBA allowed at .340 wOBA and the Braves allow the 11th worst wOBA at .320. Not that we wouldn't, but fire up Reds hitters in Week 13, and look for India in 12-team leagues.

A while back I recall someone asking to name a baseball player that could outdrink people at a bar. Well, for me, that's none other than Daniel Vogelbach. With Travis Shaw injured and Keston Hiura optioned, the slugging lefty earns a bit more playing time. Like other recent hitter streamers, the lineup spot intrigues us since Vogelbach batted second in 13 straight games. During that stretch, Vogelbach has four home runs, ten runs, and six RBI with a .255 batting average, .404 wOBA, and 158 wRC+. 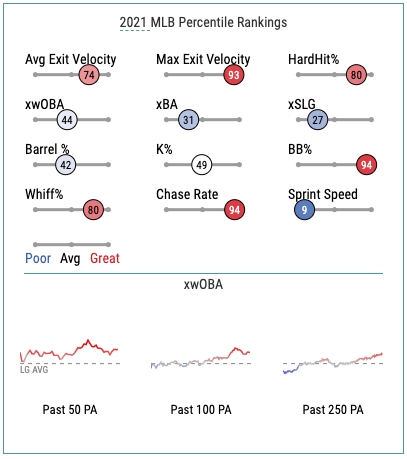 Vogelbach has the highest maximum exit velocity of his career at 114.3 mph with a near career-best 47.3% hard-hit rate. Meanwhile, he continues to show solid plate discipline evidenced by a 21.8% O-Swing% that's almost 10% above the league average and a 14.5% walk rate, which ranks in the top 6% of the league. The Brewers face the Diamondbacks and Rockies and both teams rank in the bottom-3 in wOBA allowed on the season. Both teams also rank last (ARI) and third to last (COL) in ERA over the past 14 days. Fire up the Brewers, including Vogelbach and the next hitter that we'll recommend again.

Luis Urías is another hitter that benefitted from injuries and demotions, and he is leading off for the Brewers with Kolten Wong banged up. Urías cooled off a bit in recent games going hitless in 13 plate appearances over the past three games. Before that, Urías had one home run, nine runs, and two RBI with a .265 batting average.

It's nothing mind-blowing, but everyday playing time, leading off, and holding down a solid line makes players like Urías relevant in 15-team leagues. Wong expects to return this weekend against the Rockies, which means Urías may move down the lineup a bit. However, the same matchups against the Diamondbacks and Rockies still apply.