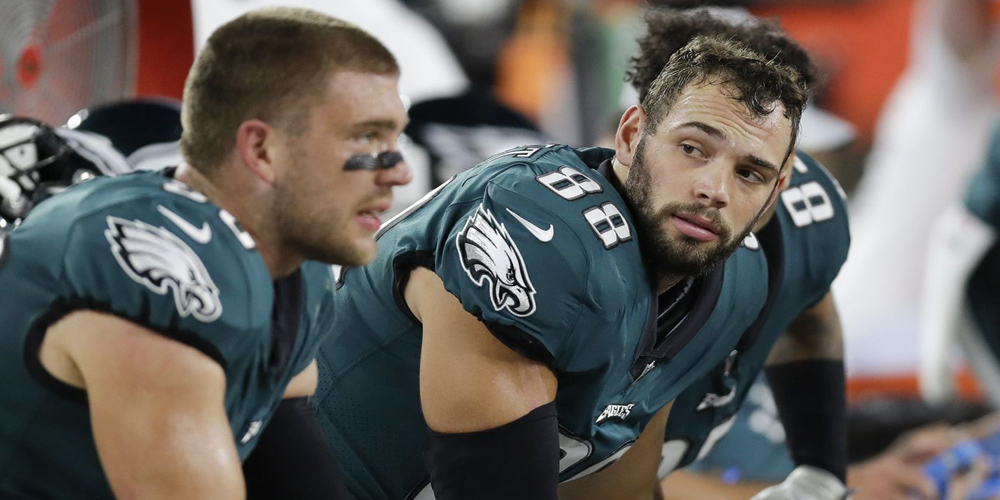 No position in fantasy football is as thin or hard to predict than the tight ends spot. The simple truth of the matter is that there are so few reliable options that the vast majority of fantasy footballers will be forced to bypass the position or try to trot out some sort of weekly streaming rotation.

That will cause most fans to disregard early tight ends and hope to exploit value later. Looking at the Advanced Metrics and Efficiency data available at FantasyData can be an immense help in this regard. And for a diminished position like tight end, analyzing red-zone targets and usage is one of the most useful tools in the arsenal of the well-prepared fantasy football drafter.

Let's take a look at the top-20 tight end red-zone target leaders from 2018 and see what kind of expectations we can bring to the table as we get ready to kick off another fantasy football draft season.

Ben Watson (New England Patriots) - After an excellent 2017 campaign for the offensive-challenged Ravens, Watson was pegged by many as a super sleeper due to reuniting with Drew Brees. Instead, Watson only topped five targets in a game twice all season and finished outside the top-20 scorers. He didn't make much impact in the red-zone either, securing only five catches and two touchdowns all season while averaging a target every other game. Watson is back in New England but is set to miss the first four games of the 2019 campaign for a PED suspension. He's well off the fantasy radar.

David Njoku (Cleveland Browns) - Njoku had nearly identical numbers as Ben Watson, but the sophomore star doubled Watson's touchdown totals and commanded a healthy 88 overall targets last season. All four of those TDs came via QB Baker Mayfield, which bodes extremely well for Njoku's fantasy potential in his third season. The Browns are building a potentially-dangerous young offense and Njoku is going to face favorable coverage as opponents are forced to account for Odell Beckham, Jarvis Landry, and Nick Chubb. Njoku has an excellent shot at winding up with top-5 numbers and could be a threat to score 6-8 touchdowns.

Evan Engram (New York Giants) - Engram missed five games but still posted solid red-zone receiving totals. Taking those 11 game's worth of production and extrapolating them out to a 16-game pace and Engram would have posted a 12/6/73/4 line, which would have placed him 10th. With New York's receiving corps decimated by injuries, Engram should play a pivotal role in the red zone in 2019.

Jordan Reed (Washington Redskins) - Six or Reed's eight red-zone looks came from inside the 10, which was tied for 10th among all NFL tight ends. Lousy quarterbacking really hurt Reed, as did his annual tradition of missing three games. Reed has yet to play more than 14 games in any one season and Washington's quarterback position still looks rather shaky. Reed should still be a reliable red-zone performer but can only be targeted in fantasy drafts as a weekly streamer.

OJ Howard (Tampa Bay Buccaneers) - The Buccaneers threw a ton last year and with Bruce Arians now in town, should continue to air it out quite often. While Arians has a history of not incorporating tight ends into his week-to-week offense, he's also never had a talent quite like Howard, who is a downfield beast as well as an adept red-zone option. Howard turned five red-zone receptions into four touchdowns, a superb 80% TD rate. He also caught 3-of-5 targets inside the 10, with all three going for touchdowns.

Jordan Thomas (Houston Texans) - Thomas only received 27 targets all season but one-third of them came inside the opponent's 20. All four of Thomas's touchdowns also came via the red zone. Now that Ryan Griffin--who also had a fairly sizable role in that area--is in New York, Thomas is a sneaky sleeper to target very late in really deep fantasy leagues.

Jimmy Graham (Green Bay Packers) - Not much went right for Green Bay's passing attack last season, but Jimmy Graham still posted top-15 red-zone target totals. While Graham has certainly lost a step or two, his history of dominating in that area makes him a nice value target at his currently-deflated ADP. With innovative offensive mind Matt LaFleur now manning the sidelines at Lambeau, expect the Packers to rebound in a big way, and Graham to flit with top-10 overall numbers.

Ryan Griffin (Houston Texans) - The Texans inexplicably continued to try to get the ball to Ryan Griffin in and around the end-zone, but Griffin put up the worst receiving totals for any tight end on this list. Griffin only caught 2-of-10 red-zone targets and failed to produce a single touchdown, either. Reportedly Griffin became upset and vandalized property upon finding out the Texans selected Kahale Warring in the third round, which led to his immediate release. Griffin will compete for snaps while Chris Herndon serves a four-game suspension, but he has no fantasy value whatsoever.

Vance McDonald (Pittsburgh Steelers) - Everyone's favorite breakout tight end, McDonald put up a solid 10/5/50/3 line in the red-zone in 2018 while splitting time with Jesse James. The Steelers enter 2019 with 137 available targets, which is the third-most in football. James is also no longer in town, so McDonald is looking for a substantial increase in targets.

Gerald Everett (Los Angeles Rams) - The Rams like to use Everett in and around the end zone. Everett only received 50 looks all season but he out-targeted Tyler Higbee in the red-zone by an 11-to-6 margin. Higbee actually out-snapped Everett by a 788-380 margin, too. Neither Los Angeles tight end is a dependable source of weekly fantasy production, but Everett looks like the best bet to work as a TD-or-bust weekly streamer.

Become a Member and Continue Reading...