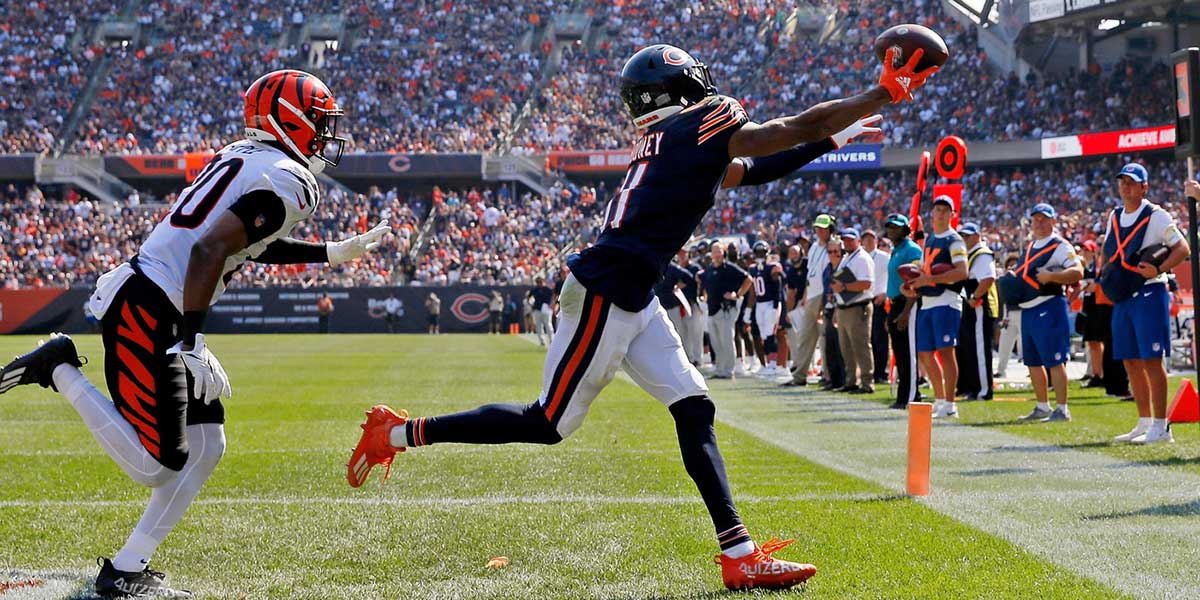 Darnell Mooney is set to have an explosive third season with Chicago in 2022. Despite playing closer to 170 pounds than 180 pounds through two seasons, the former Tulane wideout has been a massive value as a former fifth-round pick in the 2020 NFL Draft. The Bears continue to roster a lackluster wide receiving corps with training camp beginning, so Mooney will have more opportunities to produce this season.

Reports of Mooney increasing his muscle mass entering his third season are encouraging, especially to maintain durability. He has a good burst and dazzled with a 4.38 40-yard dash during his combine, ranking in PlayerProfiler's 94th percentile. Getting stronger will prepare Mooney for his second season playing with second-year quarterback Justin Fields. The two were limited in terms of playing time in 2021, as the former rookie quarterback only started ten games.

Fields targeted Mooney six times against Pittsburgh in Week 9, which resulted in a 3-41-1 stat line that propelled the receiver to his first 20-point PPR finish (20.6) in 2021. Injuries derailed their chemistry mid-season, but Mooney continued to perform well despite catching passes from Andy Dalton.

Mooney produced seven games from Weeks 11-18 with at least five receptions. Three of these games resulted in over 100 receiving yards, while the touchdowns were few and far between. Drafting rookie wideout Velus Jones Jr. out of the University of Tennesee and adding Byron Pringle in free agency are more likely to help raise Mooney's value rather than drop it under Chicago's new coaching regime.

Mooney finished 2021 with a commanding 26.7 percent target share but a lot of these opportunities failed to hit due to the lackluster and sporadic quarterback carousel. The new wide receiving corps is ambiguous in terms of how they will fit into head coach Matt Eberflus' scheme, however, Velus Jones Jr. and Byron Pringle should be upgrades from Damiere Byrd and Allen Robinson. If these two players can step in and become immediate contributors in September, Mooney will be rewarded with softer coverage.

Fields remains the X-factor in terms of Mooney's ceiling. He is healthy after an injury-riddled rookie season filled with controversy surrounding former head coach Matt Nagy's indecision on how to handle Fields' development. A fresh start and health will make a world of difference, although the offensive line remains a glaring weakness.

Mooney saw over 300 air yards (1,479) during his second season in the league and managed to finish with 81 receptions for 1,055 receiving yards and four touchdowns. This sounds impressive, especially considering Mooney finished 2021 as the WR27 in FPPG. However, it becomes disappointing when looking at the elite number of targets (140) that he finished with last season.

Mooney is capable of creating top-tier separation when running routes, which makes him a favorable target for Fields to lean on under duress. He's also great with his hands, recording only four drops and finishing with 81 receptions. Mooney's blazing wheels also show up when assessing his yards per target (7.53) versus his yards per reception (13.02), meaning he's capable of creating chunk plays using his elusiveness and speed.

There were only a couple of drops for Mooney in 2021 but he did average  just 77.1 percent in true catch rate, which divides the total receptions by total catchable targets. So again, this focuses on the targets Mooney saw from a pair of veteran backups and an injured rookie, which often sailed. However, enough of these errant passes were deemed catchable, so Mooney will need to get creative with ways to counter his 5-9 height against taller defensive backs.

The good news is that Mooney is already addressing his other weakness, which was the difficulty he had winning contested passes. He finished with just a 19.4 percent contested catch rate in 2021, ranking 77th amongst wide receivers. Mooney's offseason workout program, as mentioned earlier, has resulted in him gaining close to ten pounds of muscle. It's less about durability and more about bullying defenders when those 50/50 balls get floated in Mooney's direction.

Mooney is currently going as the WR28 with an ADP of 69.3, per Fantasy Football Calculator. This means that you can draft Mooney as a WR3 near the end of the sixth-round. Based on Chicago's lack of receiving weapons and a bad offensive line, Mooney should be a frequent flier in terms of targets and receptions once again in 2022.

He's a value at his current ADP due to a combination of factors, including Year 3 development, improved quarterback chemistry, and a command on the WR1 role. Mooney is going after clear-cut WR2s and even some WR3s, including Hunter Renfrow, Allen Robinson, and Adam Thielen. Positive touchdown regression will follow a bulked up Mooney catching passes from an improved quarterback, making this speedster a firm WR2 with high-end WR2 upside in PPR formats.