The NFL Week 4 slate is ready for us to attack, but first, let's think about how to react to the last few DFS slates. With only two weeks worth of data, it's not hard to overreact to what we saw on the field. Let other people chase the outcome stats, and we will instead focus on usage and opportunity. Let's go through each position at a variety of salary levels to see who are the best plays in cash games on DraftKings. For these purposes, a cash game is any contest that pays out at least one-third of the field. While these are also viable GPP options, we are primarily looking for safe floor combined with high usage that can lead to ceiling games.

This last week in DFS was all about whether you had Mack Hollins in cash games. He was between 20% and 40% rostered depending on what contests you entered, and he was the key to unlocking a win, assuming you went with other chalky players who busted. This was a week where David Montgomery, Leonard Fournette, and Stefon Diggs all had relatively modest games, but they were rostered everywhere so that was not the differentiator. Even the top two quarterbacks, Josh Allen and Jalen Hurts, scored the same number of fantasy points, so it really all came down to Hollins. My last decision in this lineup was Josh Allen plus Brandin Cooks or Jalen Hurts plus Tee Higgins. Clearly, I made the wrong choice but was lucky to win 100% of contests because Hollins masked the mistake. 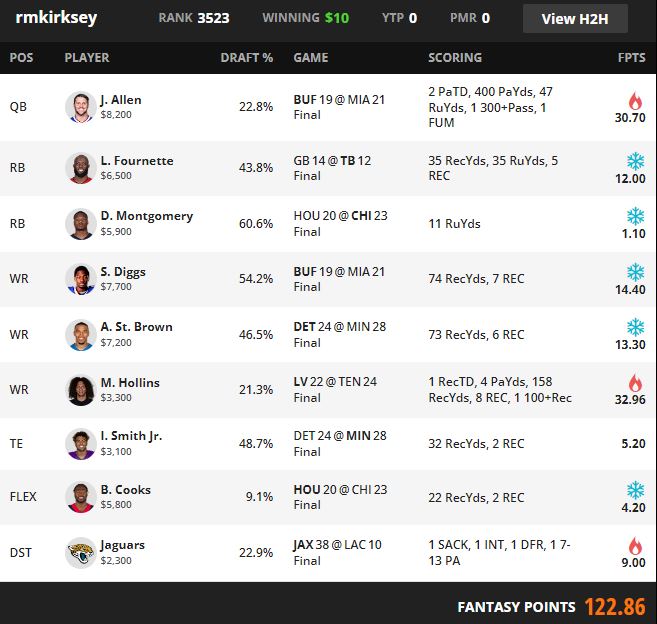 Josh Allen ($8,400) and his rival on the other sideline (Lamar Jackson) are likely to be the two most popular quarterbacks across all of DFS on Sunday. This game has the highest implied total on the slate (51 points) and features two quarterbacks who can beat you with their arms and their legs. Allen threw an uncanny 63 times in a regulation game against Miami last week, and as long as Buffalo keeps throwing at a 66% rate (sixth in the league), Allen will continue to pay off his lofty quarterback salary. The Ravens have allowed each of the three quarterbacks they have faced to reach 300 yards so the bonus is clearly within reach for Allen.

Lamar Jackson ($8,300) looks like the unrivaled MVP through three games of the season, averaging 250 yards passing, 81 yards rushing, and four total touchdowns per game. The Bills only allowing 8.7 DraftKings points per game to quarterbacks through three games might give some people pause. But they haven't faced a dual threat like Lamar Jackson yet. The Bills already lost Christian Benford and Micah Hyde due to injury and now list two other cornerbacks as Questionable due to injuries this week. It's gotten so bad the Bills had to sign two street-free agent cornerbacks just so they can ensure they have enough healthy players this week. This is a depleted defense Lamar will face and he should be able to dominate them.

Marcus Mariota ($5,600) appears to be the best value quarterback at the moment if you choose to pay down at the position. I'm likely looking to spend up for one of the top three (Jalen Hurts at $8.200 being the other) this week, but Mariota does have some appeal. The Browns allow 21.6 DK points per game to opposing quarterbacks, including two rushing touchdowns already.