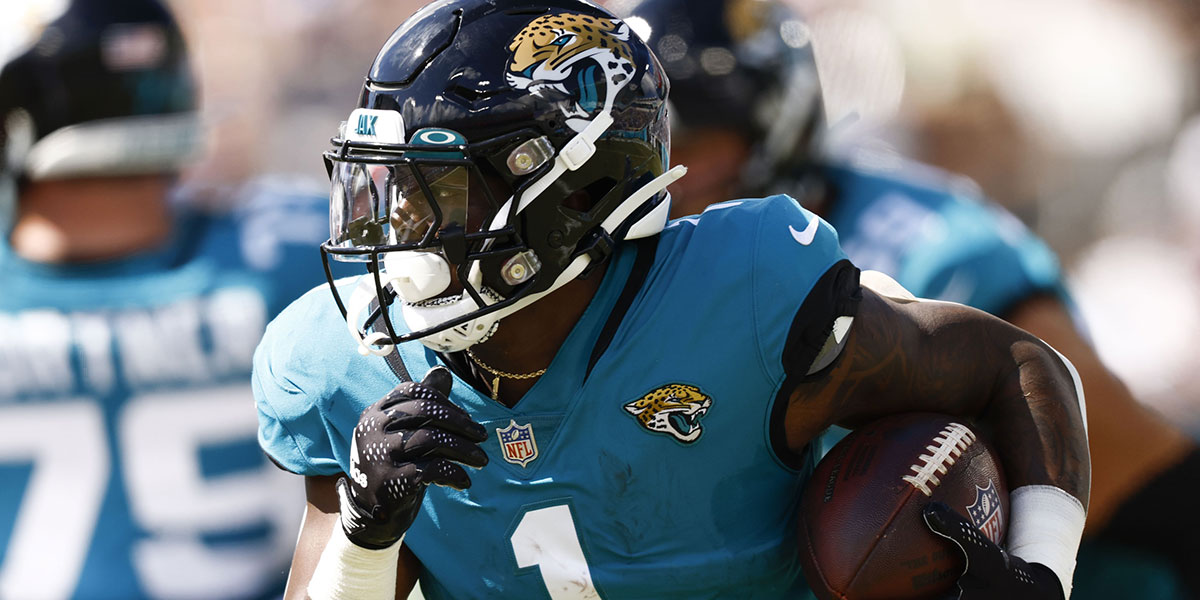 The NFL Wild Card Weekend slate is ready for us to attack, but first, let's think about how to react to this odd DFS slate. This is an unusual slate because typical slate starts at 1 PM ET and is done around 7:30 PM ET. This one will start Saturday afternoon and won't be over until late Monday night. That leaves us plenty of room to swap or make adjustments if we fall behind early. We will focus this piece primarily on the situations that are the best plays as of Friday morning and I will tweet out adjustments as necessary (@KirkseySports).

We will go through each position at a variety of salary levels to see who are the best plays in cash games on DraftKings. For these purposes, a cash game is any contest that pays out at least one-third of the field. While these are also viable GPP options, we are primarily looking for a safe floor combined with high usage that can lead to ceiling games. 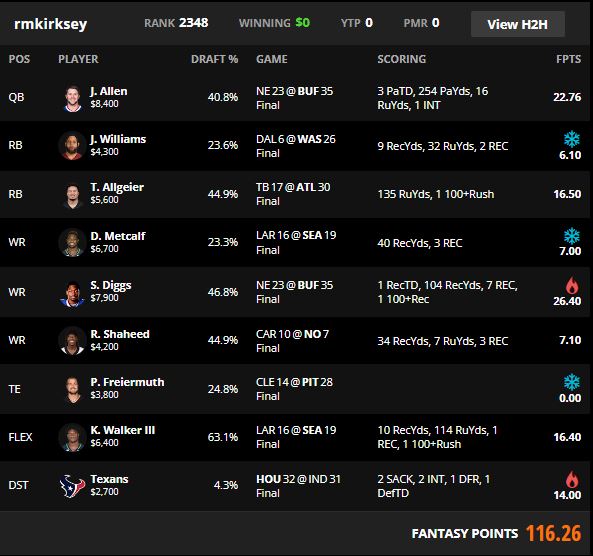 Week 18 was the "if only" DFS week for me. If only I had played my other recommendation at tight end, Hunter Henry, I would have sailed past the 120.4 cash line. If only I had played the Najee Harris/Drake London twosome I was considering instead of the DK Metcalf/Jonathan Williams dud, I would have cashed. I jumped off of the New York Jets when there was a chance Teddy Bridgewater might play, so fortunately the Texans DST made me some money back. But in most contests, I finished just below the cash line. It's just one of those weeks where I didn't land on the right side of luck and variance.

Josh Allen ($7,900) has been simply fantastic in his two starts against Miami this year. He had 40 DraftKings points and 31 DraftKings points the first two times these teams played including six passing touchdowns and no interceptions. Because of the nature of a limited player pool, we get a $500 discount on Josh Allen from what he has been listed at the past few weeks, so it's possible to jam in Allen even with other studs we want to pay up for. Allen is also rushing more towards the end of the season, with three of his last four games going over 40 rushing yards and two rushing touchdowns thrown in.

Daniel Jones ($5,600) is likely to be the chalky cash game quarterback based on his low salary and what he did to this Minnesota Vikings team last time they played in Week 16. In that game, Jones threw only one touchdown, but he passed for 334 yards (a season-high) and rushed for another 34 yards. Nine other quarterbacks are more expensive than Jones on this weekend's slate, but none of the others are facing the team that allowed the second-most passing yards in the league this year. Minnesota also allowed 23 passing touchdowns and four more rushing touchdowns to quarterbacks this year.

Christian McCaffrey ($8,900) under $9,000 is about as close as you can get to a lock-in cash games considering the workload and role in the passing game. In Week 18 McCaffrey only saw 13 opportunities (rush attempts plus targets) but still managed to pull in 16.9 DK points. Not double those touches on Saturday and we have an idea of what McCaffrey's ceiling is against Seattle. In his five previous games before Week 18, McCaffrey averaged 27.6 DK points per game. The Seahawks on the season were a sieve to running backs, allowing the third-most fantasy points per game to the position.

Travis Etienne ($6,300) had an oversized role in the Jaguars' offense in Weeks 15-17, averaging almost 20 DK points per game in those weeks. He still is criminally underused in the passing game, but the Jaguars are not afraid to run him 18-20 times per game and he typically gets 2-3 targets which he turns into 20-30 yards. The matchup against the Chargers is an elite one. Only the Texans allowed more than Los Angeles' 2,164 rushing yards this season, and they also gave up 14 rushing touchdowns plus five more to running backs through the air. When Etienne played the Chargers back in September, he received 13 carries and three targets, which I would predict is the absolute floor for him on Saturday night.

Jeff Wilson, Jr. ($5,400) stands to be the beneficiary if Raheem Mostert (broken thumb in Week 18) can not play. Mostert is officially Questionable for the game, but he did not practice on Wednesday or Thursday, putting his availability in serious doubt. Wilson has avoided playing the Bills so far this season thanks to the mid-season trade from San Francisco, but Mostert scored 19.6 DK points against them in Week 15 on just 17 rush attempts and two targets. On a slate with very little running back value, Wilson could be lined up for a big work load at a salary that is 13th-highest among all running backs on this slate.

Stefon Diggs ($7,600) has just as high a ceiling as Justin Jefferson, Ja'Marr Chase or Tyreek Hill, but is priced well below those guys for some reason. In his two games against Miami this year, Diggs has 20 targets and 12 receptions and now matches up again against the team that ranks 28th in opponents' quarterback rating and 27th in opponents' passing yards per game. Miami also ranks 26th in passing touchdowns allowed per game and they have given up more than two per game on the road this year. If Josh Allen is going to get there this week - and we believe he will - Stefon Diggs is going to be the reason why.

Keenan Allen ($7,000) is a wide receiver designed in a lab to be an optimal DraftKings play week after week. His PPR prowess assures that he will almost never have a bust week. The last time he scored less than 10 DK points in a game this year was Week 7 when he left injured in the first quarter. He has at least 11 targets in four of his last six games, and the other games checked in with six and nine targets. He gets a huge bump if for some reason Mike Williams' back injury keeps him out or forces him to be limited on Saturday.

Christian Kirk ($5,900) is $1,600 more expensive than teammate Zay Jones, but Kirk has been the more reliable receiver throughout the bulk of the season. In Jones' last seven games, he does have three games with more than 21 DK points, but has less than seven in the other four. Kirk, meanwhile, has at least six targets in all but one game since Week 7 and has been the more steady receiver. In the de facto playoff game against Tennessee last week, it was Kirk who stood out with eight targets, six catches, 99 yards, and a touchdown.

Richie James ($3,900) is an absolute lock for me at this salary and against this weak Minnesota secondary. Like the rest of his first-string teammates, he did not play in Week 18, but James had 32 targets and 26 receptions in Weeks 14-17 including three games over 60 yards and two total touchdowns. The Vikings allowed the most receiving yards to wide receivers and the second-most fantasy points to the position this year. With such a narrow passing tree in New York, James should easily reach 4x this salary on Sunday.

Dalton Schultz ($4,300) saw at least six targets in four of his last six games played this season. And while he only scored twice in that span, he accumulated the fourth-most targets and the fourth-most receptions among all tight ends the last five weeks of the season and led the position in routes run. In addition, Tampa Bay allowed the seventh-most DK points to tight ends this season.

Cade Otton ($2,800) ranked seventh among all tight ends in routes run and fifth in red zone targets this year. In an offense that broke the record for most pass attempts by a quarterback this season, that kind of usage for under $3,000 is about all you can ask for. Even something like four catches for 35 yards would be enough for this low price tag.

Buffalo Bills DST ($3,300) should be a defense we can squeeze in this week with a little bit of value opening up elsewhere and the high-end players getting slightly depressed salaries. Skylar Thompson is starting for the Dolphins in this game and he couldn't lead his team to the end zone against the Jets in Week 18. On the road in Buffalo in what is sure to be the most emotional game of the weekend? This is not going to be pretty for the Dolphins. The Bills have double-digit fantasy points in three of their last four games on top of all that.

Using some of the players listed above, you could construct a roster that looks something like this. However, keep in mind, that this is just a suggested build and could change drastically by the time the games kick off on Sunday.  You should come to your own conclusions and build a cash game roster that suits the players you prefer and your style of build. A build like the one below might be fairly chalky this weekend, but we are dealing with a limited number of players. I'm not in love with my top two running backs both going so early in the weekend, but those represent some of the best plays per dollar this weekend. That leaves Jeff Wilson, whose game is the first one on Sunday, in the flex spot. This lineup also has the salary flexibility to get up to CeeDee Lamb or Tyreek Hill if that's the direction you want to go. 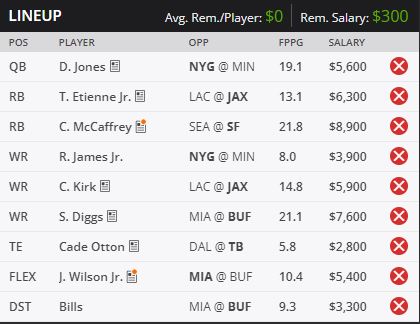