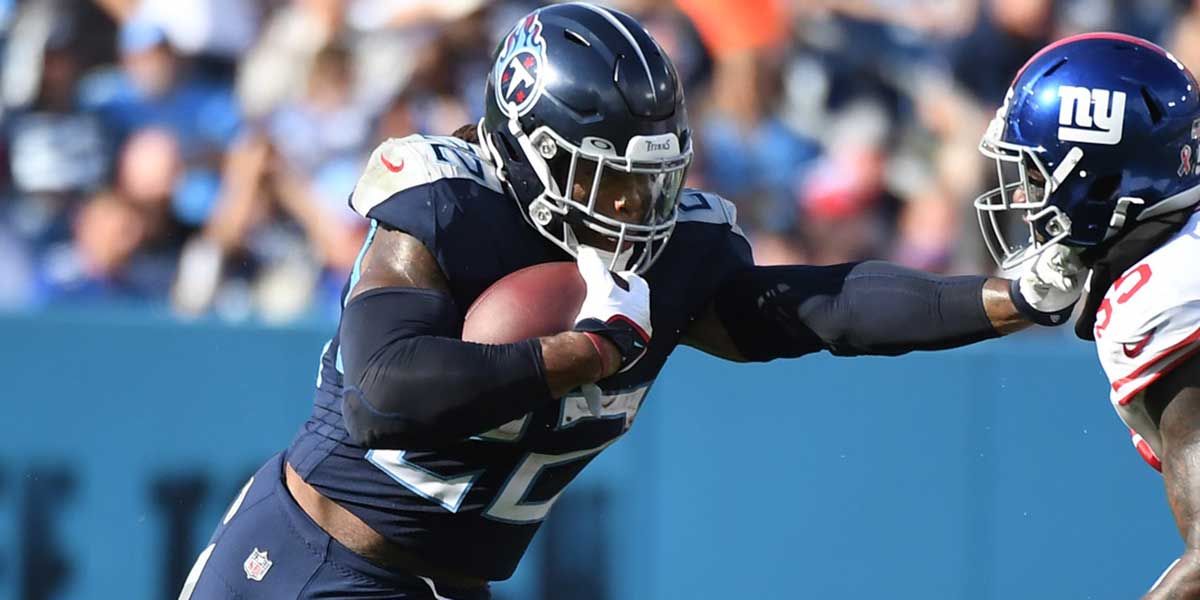 Beneath the Surface: Week 2 Breakdown

Another week of NFL football, another pile of data to sift through looking for clues. Clues as to what leads to certain results and clues for speculating what might be coming next. They say, “looks can be deceiving.” The same can be said for surface-level statistics in fantasy football. In this weekly article series, I will be looking beneath the statistical surface, beyond the standard box score, using the premium statistics provided by FantasyData, including advanced and efficiency metrics across the fantasy skill positions, to search for puzzle pieces that fit together.

It happens every year. A varying number of players drafted in the early rounds come out of the gates at a jogger’s pace, rather than the sprint we are all expecting and counting on. Every one of us would be ecstatic if each of our early-round studs smashed every week, but fantasy football is a fickle game, and trying to predict what’s going to happen is difficult.

A sense of panic can arise at this early stage of the season when our RB1s and/or WR1s underwhelm. What if they never turn it around? In this section, I will look at two players who, after two games, have disappointed based on expectations, and whether a premature panic is warranted.

Through two games, Derrick Henry is the PPR RB36, averaging 8.4 fantasy points per game. Henry has been a staple near or at the top of the fantasy RB leaderboard the last three seasons, finishing as a Top 5 RB in both 0.5 and full PPR formats. Granted his season was shortened to only eight games due to injury, but he still finished as the RB1 in points per game (PPG) in 2021 without a minimum-games-played threshold. He has bucked the trend of needing receiving output to finish that high in PPR, finishing with the following target shares:

Over the last five seasons, the average target share among Top 10 RBs (PPR) is 12.8%, so you see Henry is well below that average. Henry is an elite RB, but without the receiving volume, his reaching of overall Top 5 status has relied on a massive amount of both rushing volume and rushing TDs. Before 2022, Henry averaged just over one rushing TD per game each of the last three seasons. Volume-wise, Henry led the NFL in both rush attempts and rushing yards in 2019 and 2020. Henry achieved the RB version of the triple crown by also being the rushing TD leader and was well on his way to repeating that in 2021 before the foot injury.

It’s that kind of consistent volume, combined with Henry’s efficiency (4.9 yards per attempt) and usage at the goal line that has allowed an elite RB like Henry to produce fantasy points at an equally elite level.

Looking below the surface of this production at advanced opportunity metrics gives us something to which we can compare Henry’s slow start in 2022. There is no way around a small sample size with only two games of data, so we need to be mindful of that. But even with a smaller pile of data, opportunity metrics are more useful than the statistical fantasy results in providing closer to an accurate picture of the way a full season may play out.

The metrics include snap share, RB rush share, and opportunity share. I will also include a few efficiency metrics: yards per attempt and yards created per attempt.

This is where you can see a decrease in Henry’s usage and efficiency which is concerning. By now, most people are familiar with Rushing Yards Over Expectation (RYOE) as a strong statistic for measuring a running back's efficiency.

Now, it’s only been two weeks and the Titans’ offense has looked bad. A growing concern with Henry, especially in dynasty formats, is his age and potential wear and tear after two straight seasons with 300+ rushing attempts (2019 and 2020) and a pace to potentially set a career-high in rushing attempts before he got injured in 2021. I don’t think it’s panic time yet. I don’t think Henry is falling off the proverbial “RB cliff” before our eyes right now. It is more a product of the Titans’ offense, specifically their offensive line, being worse than what Henry has been a part of since the start of his ascension in 2018.

From 2019-2020, Jacobs has an average finish of PPR RB15, with 15 fantasy points per game over those three seasons. Jacobs is off to a slow start this season from a raw fantasy points scored perspective, but some of his peripheral statistics indicate his opportunity has improved compared to the previous seasons.

The following are Jacobs’ share of the RB rush attempts and RB opportunities (rush attempts plus targets) over the last three seasons:

According to FantasyData’s premium market share statistics, since 2012, no RB has attained an 80%+ RB Rush Share over a full season. The highest in that time was 77.2% by DeMarco Murray in 2014. So I do not expect Jacobs to maintain his current pace. But hitting a 65%-70% mark is plausible. Zamir White (whom I like long-term) is a rookie who has only seen 5% of the snaps so far. White will become more involved, and veteran Ameer Abdullah will get on the field some in passing situations, but Jacobs has no real competition for carries.

Part of the issue so far is simply a relatively small rush attempt market in Las Vegas. The Raiders’ play calling thus far has been 55.3% pass, 44.7% run, one of the higher pass-run ratios in the league. This makes sense with Josh McDaniels steering the ship, a healthy Darren Waller, and the addition of Davante Adams. And the Raiders were even more lopsided in 2021, passing on just over 60% of plays. But the increased RB rush share is promising. Since 2012, the average finish in PPR for RBs with a 60%+ RB Rush Share is RB10, with the following hit rates (64 total RBs):

Jalen Hurts came into the 2022 season with a lot of hype as a dual threat, high floor/high ceiling QB. Hurts finished the 2021 season as the overall QB7, largely on the back of his rushing numbers: 139 rush attempts for 784 yards and 10 rushing TDs, which accounted for 44% of his total fantasy points. A modest 3,144 passing yards, 16 passing TDs, and completion percentage in the low 60’s left the passing portion of his fantasy attack in question.

So far, that concern has been squashed. Adding an elite WR like AJ Brown will help any QB, but Hurts has looked like a true league-winning dual-threat QB. Hurts currently leads the NFL with an average of 9.1 yards per pass attempt, almost 2 yards higher than 2021, and his completion rate sits at 69.8%. Hurts has thrown just over 30 passes per game (up from 28 in 2021), and he’s averaging 288 passing yards per game (up from 209 in 2021), which if extrapolated over 17 games would be 4,896 passing yards. For reference, Patrick Mahomes averaged 284.6 passing yards per game in 2021. I don’t think he keeps up that passing yards pace, and he does only have one passing TD through two games. What is important is after rushing over 500 times last season, the Eagles look to be trusting in Hurts’ arm more than they have, and he looks solid in that department. And he still sits at the overall QB3 partly due to already having rushed for three TDs (high floor, high ceiling).

As with all players discussed in this article, it’s only been two games, but Hurts already has a 300-yard game, something he only did twice last year, and the Eagle’s offense looks to be as close to mid-season form as any team that’s not the Bills, and Hurts is the centerpiece.

I wanted to give a nod to the rookie WRs selected in the first round of the 2022 NFL Draft. I do not remember a season where this many rookie receivers started this fast this quickly. In redraft format, often most rookie RBs and WRs are drafted to stash on your bench, with the second half of the season being when potential fantasy relevance or breakout is the hope. Sure, there are always the Saquon Barkley or Najee Harris players who are drafted in the early rounds of their rookie season. But by and large, rookies go in the middle and later rounds of fantasy drafts. Draft capital does matter, and there are plenty of examples where the NFL has told the fantasy community a slightly different story than we were expecting with the draft capital the actual NFL teams have bestowed upon players. For example, a common reaction to the Washington Commanders selecting WR Jahan Dotson as early as they did was that of a potential “reach.” The same can be said for the Saints trading up to select WR Chris Olave. Don’t get me wrong, both of these WRs were very good prospects, but both were drafted earlier than expected. But again, the NFL was telling us something. Not including the Lions because Jameson Williams is still recovering from his ACL injury, each of the other five teams who selected a WR in the first round looks to have made a very good pick. Dotson currently leads all rookie WRs in TDs and has a 100% route participation, having run the 4th most routes in the NFL, and Olave has a 22.5% target share in the Saints offense. Of the five, Burks has gotten off to the slowest start having run only run 29 routes, but he leads the group in yards per route run (YPRR).

Here is how these five Round 1 rookies have started their NFL careers:

Week 2 saw solid outings from these WRs across the board.

How about them 1st Round rookie WRs!

Last week I included the Colts’ Ashton Dulin and the Jaguars’ Zay Jones as lesser-rostered players to monitor. Dulin has a solid outing with both Michael Pittman Jr. and Alec Pierce not suiting up, seeing a 64% snap share and putting up 79 yards on five catches, leading the team with seven targets. With Parris Campbell only seeing two targets (no catches), this was a promising development for Dulin. Zay Jones saw only four targets against the Colts, hauling in three catches for 23 yards. His snap share was also down to 68% (83% in Week 1), but I’m chalking some of this to the Jaguars dominating the Colts from start to finish. I still believe in Jones’ potential this season with what looks like a very pass-happy offense.