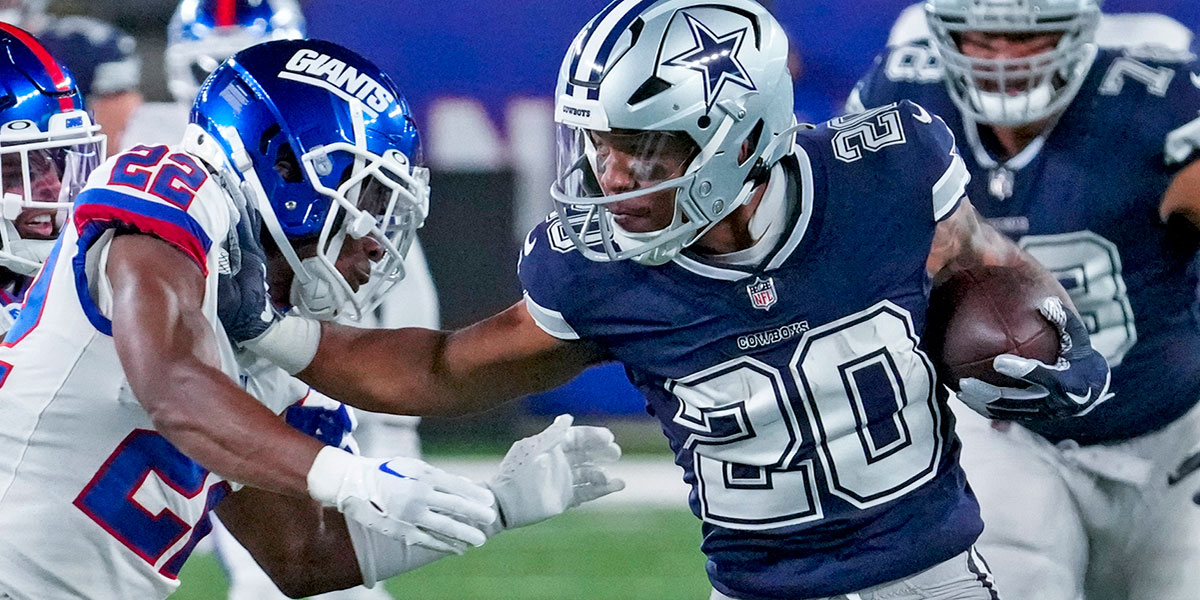 Week 10 had epic performances from a lot of NFL teams. Minnesota outlasted Buffalo in a thrilling 33-30 overtime win that saw Kirk Cousins rise to the occasion, while Josh Allen played through his UCL injury but cost his team the win with huge turnovers at the end of the game. The NFL launched its inaugural matchup between Seattle and Tampa Bay in Munich, Germany, in front of a raucous crowd, which saw Brady and the Bucs rattle off their second consecutive win. Meanwhile, Justin Fields continued to impress with another 100-rushing-yard outing in a shocking loss to the suddenly competent Detroit Lions. T.J. Watt returned to bolster a struggling Pittsburgh defense to the tune of a 20-10 win over New Orleans, while Tua Tagovailoa continued to improve his MVP odds with his third straight game, logging over 300 passing yards and three touchdowns. Lastly, Jalen Hurts and the undefeated Eagles suffered their first loss to division-rival Washington on Monday Night Football, shocking many as 11-point favorites at home.

Week 11 has four more teams on their Bye Week, meaning players on Jacksonville, Miami, Seattle, and Tampa Bay will not be available to start in fantasy football lineups. More difficult start/sit decisions have arrived, but that's why I'm here to help. Last week, my recommended starters performed admirably. Justin Fields was the overall QB1 once again with 39.3 PPR points, while Gabe Davis finally got going against Minnesota's vulnerable pass defense, finishing as the WR9 in PPR formats. JuJu Smith-Schuster looked good until a brutal hit knocked him out of the game, but Chris Olave had his worst game of the season (WR59) against Pittsburgh's rejuvenated defense. Deon Jackson was ruled out and Jonathan Taylor returned to form, but Jamaal Williams (RB20) and Raheem Mostert (RB10) delivered RB2 and RB1 performances, respectively. Unfortunately, Jacksonville tight end Evan Engram did little with his four targets, ceding all of the passing work to wideout Christian Kirk. All four of my sits were good choices, as Devin Singletary (RB12) needed a pair of goal-line touchdowns to climb into an RB1 (RB12) finish. Michael Pittman Jr., Robert Tonyan, and Justin Herbert all finished well outside of the top 12 in their positions.

Philadelphia suffered its first loss of the season, and Miles Sanders was held in check by Washington's stout defensive line. Don't let this disappointing performance fool you. The Eagles are a run-centric team, and Sanders has handled double-digit carries in all but one game this season. His floor isn't as high due to lack of targets in the passing attack, but Sanders gets a top-ten matchup against Indianapolis' run defense on the road in Week 11. Plug Sanders into fantasy lineups as a solid RB2.

It was an ugly outing for all Atlanta Falcons players this past Thursday night in Charlotte. Cordarrelle Patterson did miss a handful of games due to a procedure on his knee, so it's a bit concerning that he looked so ineffective in his first game back against a vulnerable Panthers defense. It could be an anomaly, but head coach Arthur Smith's philosophy is the ground game, so expect Patterson to return to double-digit carries in a juicy matchup against Chicago's run defense. The Bears are the fifth-best matchup for fantasy running backs, so even without a relevant target share, Patterson has enough value to be a high-end RB2 at home in Week 11.

Yes, it's a tougher matchup in Week 11 on the road against the 8-1 Minnesota Vikings, but Tony Pollard is a must-start regardless of the matchup or presence of Ezekiel Elliot. The fourth-year running back out of Memphis has elevated his game to new heights this season, logging over 21 PPR points against Chicago and Green Bay during his previous two games. Minnesota is a bottom-eight matchup for fantasy running backs, but Pollard saw six targets in Week 10, offering a big floor with the potential to burst and deliver an RB1 finish. Start Pollard until further notice.

Carolina is reportedly going to roll out Baker Mayfield under center in Week 11 against Baltimore, which could devalue D.J. Moore a bit. He disappointed against Atlanta in Week 10, as the Panthers' offensive identity was rooted in feeding running back D'Onta Foreman over 30 carries. Moore has dudded in back-to-back games against Cincinnati and Atlanta, but he is in a good position against Baltimore's pass defense, which is the sixth-best matchup for fantasy wideouts. Fire up Moore as a borderline WR2/WR3 with high-end WR2 upside on the road against the Ravens.

Terry McLaurin has been coming to life with Taylor Heinicke under center. Washington is now 5-5 and have won four of their previous five games, including a tightly contested loss to Minnesota in Week 9. McLaurin has at least eight targets in four consecutive games, finishing with double-digit PPR points in each matchup. Week 11 will keep the Commanders on the road gainst the Houston Texans, who are a tough pass defense, but McLaurin should be treated as a mid-range WR2. Lock him into lineups on an offense that is currently humming.

New Orelans might be making a change under center after several disappointing performances from Andy Dalton. Olave had the best fantasy wide receiver matchup in Week 10 against Pittsbrugh, but it only resulted in seven PPR points with five total targets. Olave will bounce back against the Los Angeles Rams, who quietly have one of the worst pass defenses in the league this year. It's another top-ten matchup for Olave to get solid production, making him a WR2 even with Jameis Winston throwing passes.

The return of Dak Prescott has elevated Dalton Schultz's appeal in fantasy lineups. The Cowboys' tight end has recorded five or more receptions in three consecutive games, scoring his first touchdown of the season against Green Bay in Week 10. He's heating up and his rapport with Prescott is excellent, which makes Schultz a top-five tight end against Minnesota's defense, which allows the ninth-most fantasy points to tight ends this season.

Dak Prescott fell short against Aaron Rodgers and Green Bay's defense in Week 10, but he is playing well enough to plug into fantasy lineups. Prescott doesn't offer the rushing upside we're seeing from there quarterbacks like Justin Fields and Lamar Jackson, but the Vikings are giving up the 10th most fantasy points to quarterbacks this season. Expect a motivated Prescott to continue feeding star wideout CeeDee Lamb and tight end Dalton Schultz in what feels like a must-win game for the Cowboys during a tough road environment up in Minnesota in Week 11.

Despite reports from head coach Dan Campbell giving D'Andre Swift a bigger workload and removing his injury designation prior to Week 10 against Chicago, the Lions have stuck with Jamaal Williams as their lead running back. Swift managed to score a touchdown but finished with only six carries for six yards, adding one reception for six yards on three targets. It's clear that something is amiss. Factor in Detroit's mini-win streak, and Swift will likely continue to be underwhelming in fantasy lineups against a gritty New York Giants defense in Week 11. As painful as it is, sit Swift and pivot elsewhere until we see more volume.

Amari Cooper has been abysmal on the road for Cleveland this year, allowing Donovan Peoples-Jones to become a relevant Flex option in fantasy lineups. While quarterback Jacoby Brissett has a couple more weeks before the return of Deshaun Watson, Cooper gets another road matchup against a motivated Buffalo defense in Week 11. The Bills aren't the toughest matchup, but he'll still be dealing with a bottom-14 fantasy wide receiver matchup. Sit Cooper in a game that could get buried in snow, further lowering his floor.

As much as we wanted Kyle Pitts to be a difference-maker in 2022, Arthur Smith is simply not allowing the Falcons to air it out enough to make Pitts a consistent starter. He has popped in a couple of games, but he has failed to deliver five PPR points against the Chargers and Panthers. Next up is Chicago's pass defense, which is the fifth-toughest matchup for fantasy tight ends. Sit Pitts and maybe consider leveraging his 19-point blowup game against the Panthers in Week 8 as trade bait instead of cutting him to waivers.

I'm back to benching Justin Herbert in Week 11. Yes, he is reportedly getting Keenan Allen and Mike Williams back, but Kansas City's defense is better than it looks on paper. Herbert hasn't looked the same since sustaining a rib injury against the Chiefs back in Week 2, recording five straight finishes under 20 PPR points. He had great production the first time against Kansas City, but expect Chiefs DC Steve Spagnulo to have a game plan prepared for containing Herbert, especially without the threat of a good running game. Bench Herbert and stream other options like Dak Prescott, Aaron Rodgers, or Daniel Jones.