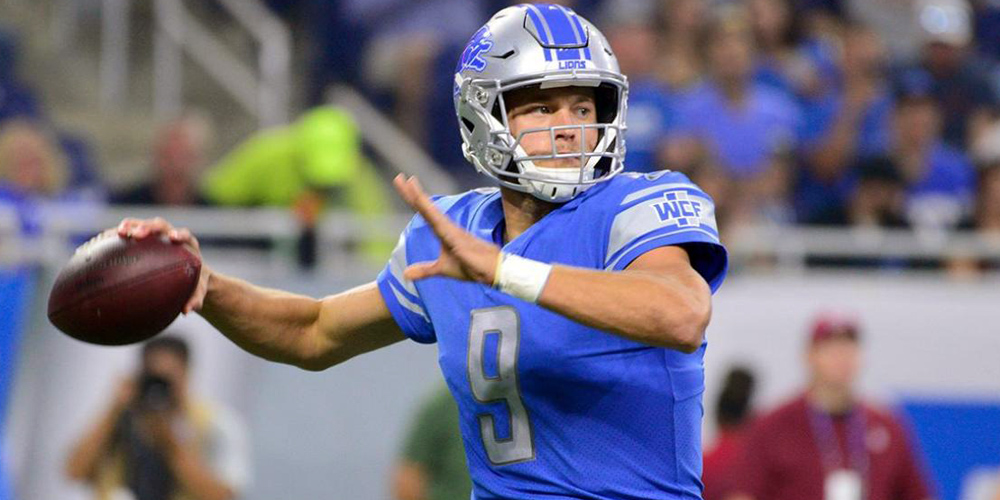 Starts and Sits for Week 7

For a season that has been filled with so much uncertainty and potential turmoil, things sure are going by fast. We've had a little bit of drama but by in large, it feels like we're coasting through another football season and the midway point is getting alarmingly close.

These are the crucial weeks where potential championship teams have to build depth and secure wins. By this point, most fantasy managers have a pretty good feel for their rosters and one of the best ways to improve those victory odds is to know which reserves and potential free-agent acquisitions might make good starts in a Week 7 that will be missing key contributors due to scheduled bye weeks.

Here are some under-the-radar starts to consider this week, along with a list of players you may want to consider sitting in Week 7.

Matthew Stafford (QB) Detroit Lions at Atlanta - In terms of pure fantasy points per game, Stafford is having a rather mediocre season. After five games, he doesn't even rank inside the top-10 at his position, nor as he posted even one 300-yard game. That could change on Sunday as Stafford has the most appealing matchup for any signal-caller--a trip to Atlanta to face a Falcons' secondary that cedes the most fantasy points to quarterbacks. The Falcons have allowed 310-plus passing yards and multiple touchdowns in every game so far. With WR Kenny Golladay now fully healthy and RB D'Andre Swift coming off of a breakout game, Stafford is an excellent bet to finally have that breakout game fantasy managers have been waiting for. 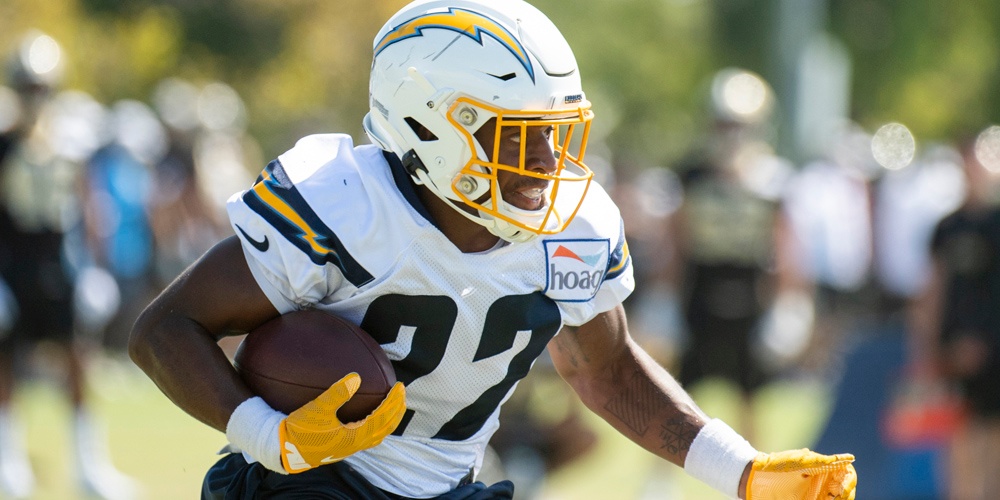 Justin Jackson (RB) Los Angeles Chargers vs. Jacksonville - While the vast majority of the fantasy football community thought that Joshua Kelley would be anointed as the Chargers' main back while Austin Ekeler (hamstring) was sidelined, it was Justin Jackson who got 20 touches and racked up 94 yards of offense at New Orleans. Jackson has always flashed solid receiving prowess, but he fared extremely well as a runner, accumulating 71 yards on the ground, which is the second-most the Saint's have surrendered to any back. Things should be much easier in Week 7 as the well-rested Chargers host a horrid Jacksonville defense that has allowed the fifth-most fantasy points to opposing running backs. The Jags have surrendered 96 or more rushing yards to each of the last three starting running backs they've faced, which is great news for Jackson's chances of posting RB2 numbers.

J.D. McKissic (RB) Washington Football Team vs. Dallas - If you're looking for a free agent to pick up and start, McKissic looks like a great choice in PPR formats. McKissic has actually out-snapped Antonio Gibson in three of Washington's past four games, and he's really starting to take on a big role in the passing game. In the last three weeks, McKissc has reeled in 19-of-22 targets and ranks as the RB22 in PPR. He even chipped in 8 carries for 41 yards in Week 6 versus New York and gets a fantastic Week 7 matchup against a horrendous Dallas defense that can't stop anybody. Look for another 10-15 touches in this game, with enough receiving production to make McKissic a solid RB3 for fantasy managers who won't have Myles Gaskin, Dalvin Cook, or Jonathan Taylor due to their byes.

Christian Kirk (WR) Arizona Cardinals vs. Seattle - After a quiet opening month of the season, Christian Kirk is starting to thrive as Arizona's schedule has softened. Kirk put up a 5/78/0 line on the Jets, then pasted Dallas with two scores on Monday Night Football in Week 6. As luck would have it, Arizona's schedule for Week 7 is even better--a home date with a Seahawks' defense that has allowed the most receptions (108), receiving yards (1,472), and fantasy points (59.5 per game) to wide receivers so far in 2020. This contest's over/under opened at 56.5, which is the highest of the entire slate. Fire up Kirk as a solid WR2, even with DeAndre Hopkins drawing double-digit targets.

Marquez Valdes-Scantling (WR) Green Bay Packers at Houston - Houston's pass defense is starting to slip. In the past three weeks, the Texans have allowed the second-most touchdowns (6) to wideouts and allowed the fifth-most fantasy points to the position. Obviously, Davante Adams will be atop the Week 7 rankings, but Valdes-Scantling is playing just as many snaps and should be in a great spot to command 7-plus targets in a great rebound spot for the Packers offense.

Eric Ebron (TE) Pittsburgh Steelers at Tennessee - Ebron is playing 51 snaps per game, which is more than any Pittsburgh skill position player except Juju Smith Schuster. Gameflow hasn't always been the most indicative for fantasy production, but Ebron record 5 receptions in back-to-back games before the Steelers called off the dogs in a Week 6 blowout of the Browns. With that kind of playing time and target stare, Ebron is a solid bet to post TE1 numbers this week against a Titans defense that has allowed a tight end to get into the end-zone in four of Tennessee's five games.

Jimmy Garoppolo (QB) San Francisco at New England - Garoppolo is coming off of his best game of the season, putting up a season-high 268 passing yards and three scores on national tv against a solid Rams' defense. But Garoppolo has been rather erratic and isn't in a good spot to repeat that performance in Week 7, traveling to New England to face a top-10 Patriots' pass defense. New England has not allowed a 300-yard passer this season and has held two of their three home opponents without a TD pass. Garoppolo may be a decent weekly streaming option but he's not poised to repeat last week's success in a tough spot.

James Robinson (RB) Jacksonville Jaguars at Los Angeles Chargers - Robinson has been one of those season-saving free-agent acquisitions who continues to find ways to return positive fantasy value even with limited carries. That's mainly due to Robinson's usage, where's he's posting an impressive 46.1 utilized rate and has also snagged 4-plus balls in each of Jacksonville's past four contests. But it might be that teams are starting to figure Robinson out, or at least account for him as a runner more. His yards per carry and efficiency has declined in each of the past three games, and so have his actual carries. This week, Jacksonville travels to LA to face the only team in the NFL who has not allowed a rushing touchdown to a running back, a Chargers' squad that has held Clyde Edwards-Helaire, Mike Davis, and Alvin Kamara all under 50 rushing yards. While Robinson's usage indicates he can still post usable fantasy stats in this contest, he's more of a middling RB2 than a sure-fire RB1.

JaMycal Hasty (RB) San Francisco 49ers at New England - This undrafted rookie free agent will be one of the hottest waiver wire adds this week, based mainly on his role in Week 6 after Raheem Mostert exited. With Mostert now sidelined for the next month, the 49ers will look towards Hasty to take on a bigger role. But chances are, Jerick McKinnon and Jeff Wilson will take the majority of the work, just like they did in Weeks 3 and 4 when Mostert was out. Wilson wasn't active last week or he likely would have taken most of Hasty's workload. Regardless, the matchup against New England's top-5 run defense isn't a matchup to target, anyway. Proceed with caution with Hasty 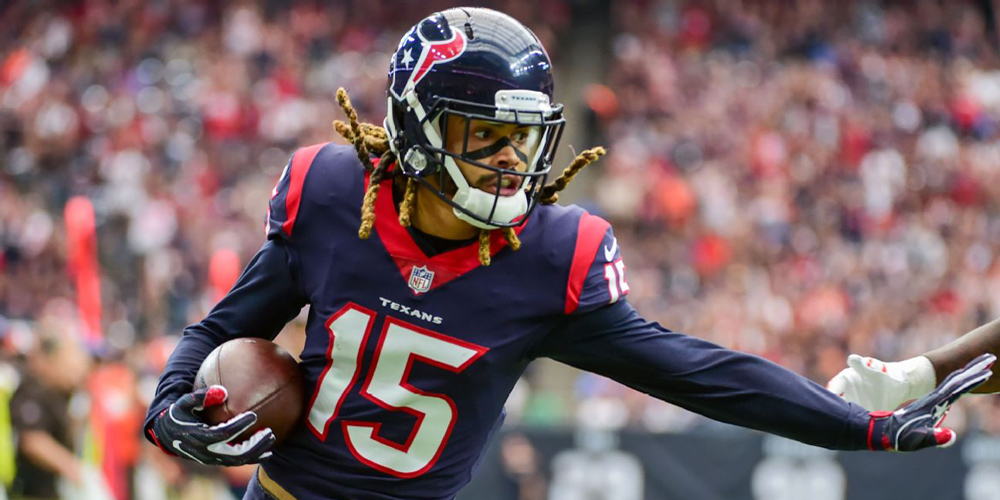 Will Fuller (WR) Houston Texans vs. Green Bay - Let's face it- nobody is sitting Fuller but this is more of a warning to lower expectations. Fuller is the best bet to draw shadow coverage from Green Bay cornerback Jaire Alexander, who has been rated as the league's best coverage corner by Pro Football Focus. Overall, Green Bay has allowed the sixth-fewest fantasy points to wideouts. Two weeks ago, Alexander limited Julio Jones to 4 catches and 32 yards, while last week, Mike Evans caught a single 10-yard pass. It's also possible that Alexander could draw Brandin Cooks in coverage, so monitor the coach speak as the matchup draws closer.

Cooper Kupp (WR) Los Angeles Rams vs. Chicago - Kupp was one of the biggest disappointments from Week 6, hauling in only 3-of-9 targets for a season-low 11 yards against a formidable San Francisco secondary. Things won't get much easier for Kupp in Week 7 as the Rams return to LA to face a Chicago Bears defense that has absolutely locked down opposing wideout. The Bears have allowed an NFL-low 1 touchdown reception this season to a wide receiver and they've been particularly stingy against slot receivers. It's difficult to bench a stud fantasy wide receiver like Kupp, but his chances of a productive rebound after a disastrous performance last week are not good. This game opened with the third-lowest over/under on the Week 7 slate, which tells us Vegas is expecting a low-scoring slugfest, which is generally a good indicator of a situation to try to avoid in fantasy.

Hayden Hurst (TE) Atlanta Falcons vs. Detroit - Perhaps it's just a scheduling quirk, but the Lions have been tremendous against tight ends so far in 2020. Detroit allowed a pair of touchdowns in the first two weeks of the season, but no tight end has surpassed 25 receiving yards in a game. In fact, the Lions haven't even allowed 100 total yards to the position in five games. Tight ends are averaging just 6.3 PPR points per game, with only Jimmy Graham and Robert Tonyan surpassing five points. Meanwhile, Hurst has been erratic, following up a game with 50-plus yards with a game with fewer than 10 since Week 2. After a 4/57/1 outing in Minnesota, Hurst could be in for another letdown against a surprisingly adept Detroit unit.