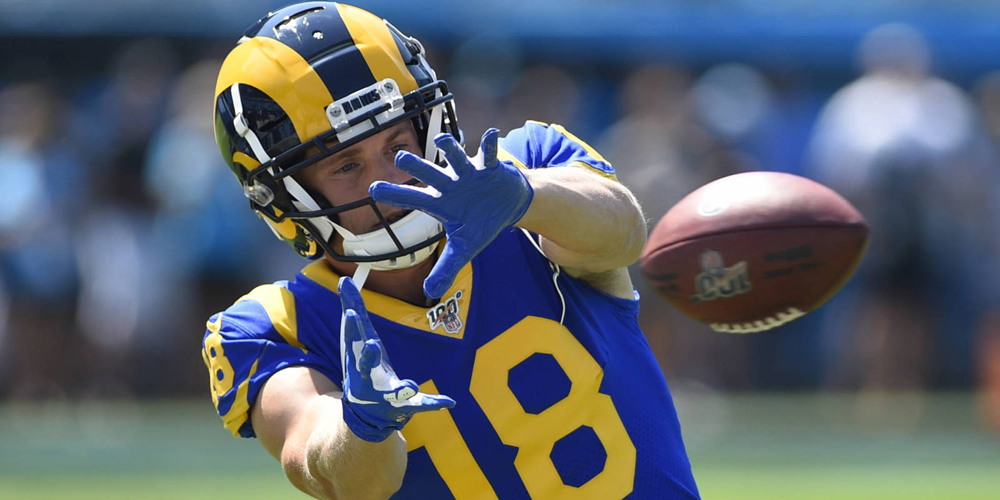 In today's data-filled landscape, opportunity is everything in fantasy football. For wide receivers, no metric identifies opportunities better than targets. At the end of the season, players who receive the most targets tend to be at or near the top of the fantasy points leaderboards.

Of course, not all targets are created equally and subpar quarterback play can also skew those figures. Fantasy Data's True Catch Rate factors out those uncatchable passes and gives a better indicator of just how efficient a wideout is playing.

Now that we have multiple games worth of data to analyze, we have a clearer picture of who the most and least efficient wide receivers have been so far in the 2019 football season. Here are the NFL's best and worst wideouts entering Week 3 via Fantasy Data's True Catch Rate and how we can use that data to help our fantasy squads moving forward.

Matt Ryan has tossed a league-worst five interceptions, which is the main culprit in the poor True Catch Rate totals for Julio Jones and Justin Hardy. Hardy has only played 33 snaps and isn't really a fantasy option. Jones has commanded his usual target share but has only caught 11-of-21, including 4-of-11 contested catches. When targeting Jones, Ryan has only posted a 72.9 QB rating. Expect those numbers to improve with each week and for Jones to rapidly move up these standings.

Instead of benefiting from the arrival of Odell Beckham Jr., Jarvis Landry has sputtered. Like Matt Ryan, Baker Mayfield is off to a rather mediocre start to the 2019 season, which is partly responsible for Landry's struggles. That said, Landry isn't performing well in contested-catch situations, has a 7.1% drop rate, and has only caught half of his 14 targets. Things should improve, but the Browns have a difficult schedule for the next two months and that could result in Landry being more of a WR3/4 than his usual WR2.

Quarterback play once again is a factor in another elite wideout getting off to a slow start. Mike Evans has only posted a 66.7% True Catch Rate, catching less than half of his 13 targets. Coverage has also been a huge factor, as opponents are only allowing Evans 0.54 yards of separation, which is the fourth-worst in football. The schedule eases up quite a bit beginning this week when Evans and the Bucs host a New York Giants' secondary that has allowed the third-most fantasy points to opposing wide receivers so far in 2019.

John Ross is a top-5 fantasy wide receiver through two games but imagine how much better he could be if he could catch the ball. Ross dropped three passes in Seattle and enters Week 3 with a 15% drop rate. Of course, Ross also leads the NFL with 270 receiving yards and three touchdown grabs. It remains to be seen how Zac Taylor will utilize Ross when A.J. Green returns to the lineup. Despite the poor efficiency metrics, Ross needs to be left in lineups while he's on the first real hot streak of his career.