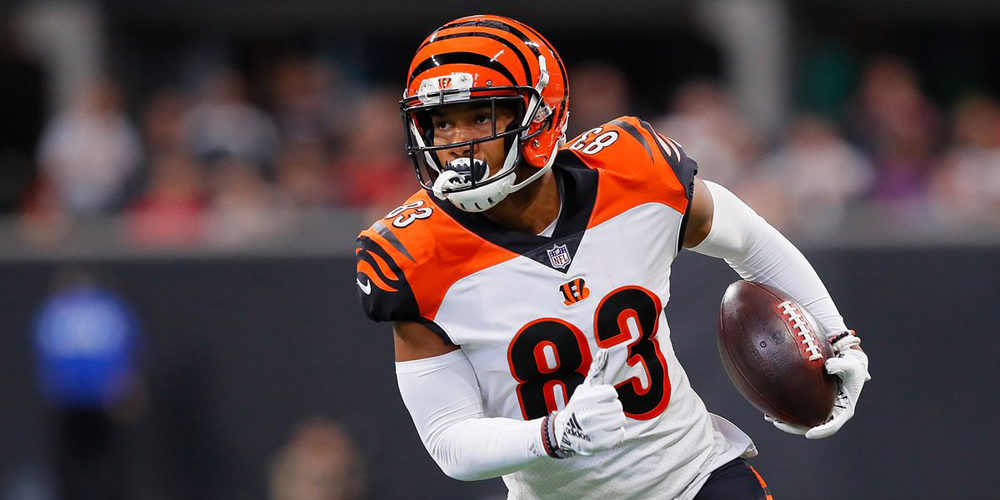 Advanced Fantasy Metrics: The Best and Worst WR's from Week 1

It seems like it was just yesterday that I was "borrowing" my neighbor's newspaper each Monday to manually tabulate scores for my fantasy league. The idea that so much emphasis and value would be placed on advanced metrics and rankings was unfathomable back then. Yet, it's access to this detailed efficiency metrics that have led to the growing popularity and success of this great hobby.

One of the perks of this job is having access to that data and being able to analyze and dissect trends. In fantasy football, no position relies on those kinds of figures more than wide receivers.

This summer, I broke down how Fantasy Data's True Catch Rate could be used to determine which wide receivers had the best hands in 2018. Now that it's 2019, I'd like to expand out on that metric and look at the best and worst wideouts on a week-to-week basis. So using our WR advanced efficiency metrics via True Catch Rate, here are the best, and worst wideouts from Week 1 and how we can use that data to help us moving forward.

Zac Taylor's Bengals came out blazing in Seattle and Tyler Boyd was the only wideout with more than 10 targets to produce a pefrect 100% TCR score. Boyd's numbers were surpassed by John Ross, but Ross also dropped three passes while the sure-handed Boyd hauled in every catchable target, including a pair of contested grabs. We can't expect Cincinnati to surpass 400 passing yards each week, but Boyd's 2018 momentum carried over into the new season and he should be considered a strong weekly WR2 while A.J. Green reamains sidelined.

Week 1 wasn't an overall great showing for Carolina's offense, but there's reason for optimism. Breakout candidate D.J. Moore posted a perfect score by hauling in all seven of his catchable passes for 76 yards. He failed to get into the end zone but the Panthers boasted the No. 1 (Curtis Samuel) and No. 3 (Moore) wideouts in terms of cushion afforded by the defense. Moore retains his high-end ceiling in Week 2 against Tampa, who travels on short rest. 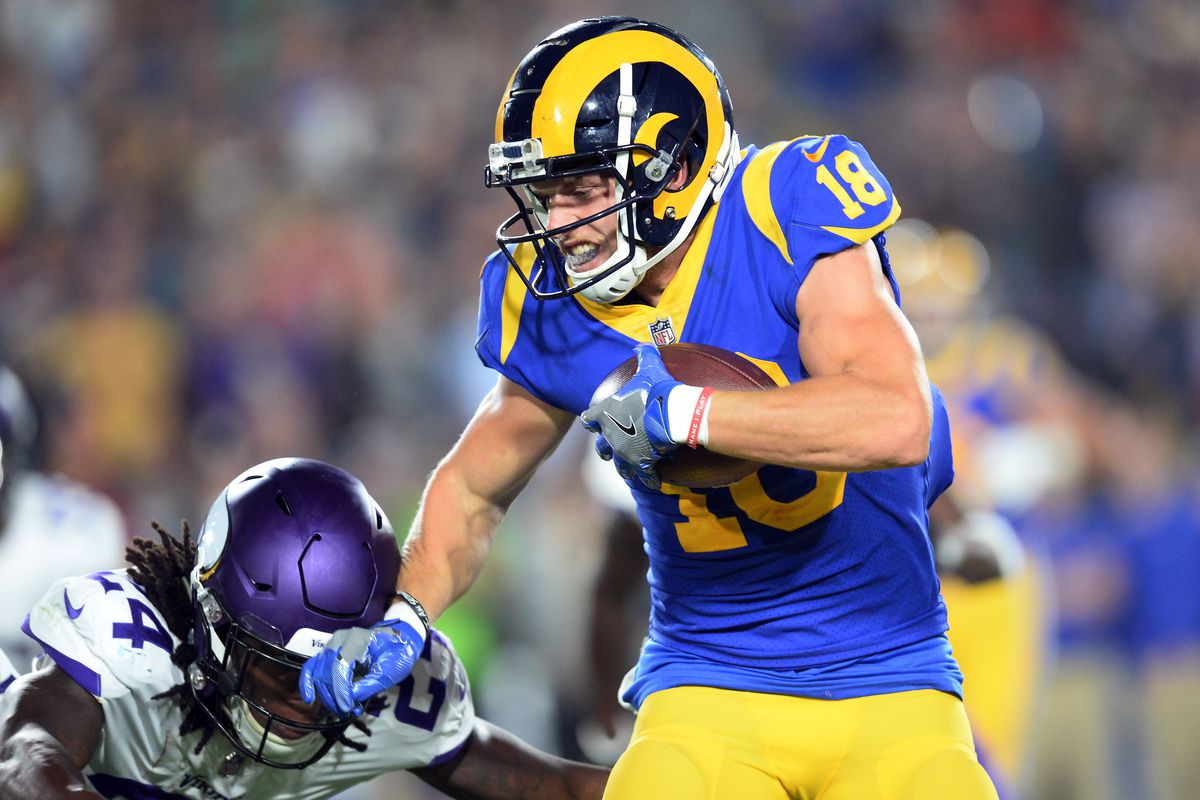 Cooper Kupp caught 7-of-10 targets but was held to just 46 yards. While the performance doesn't raise eyebrows, Kupp looked fully healthy and was involved early and often. He will be an elite option in Week 2 as the Rams host a New Orleans secondary that just allowed 14 catchers, 216 yards, and three touchdowns to the Houston Texans' wideouts.

So much for worrying about how T.Y. Hilton would perform without QB Andrew Luck. Hilton was probably the most effective wideout from the season opener, catching 8-of-9 targets for 87 yards and a pair of touchdowns- both of which came in the red zone. Hilton failed to reel in his only contested-catch opportunity but managed to post a robust 3.46 yards per route run. He remains a solid WR2 this week against an improved Titans' secondary.

The Steelers had no answers for New England, but Juju Smith-Schuster still had a solid showing against tough coverage from Stephon Gilmore. Smith-Schuster was able to create separation before injuring his toe late into the fourth quarter. That ailment isn't considered serious so expect another solid showing this week as the Steelers host a Seattle secondary that just surrendered a league-worst 418 passing yards to Cincinnati.

Michael Gallup corralled all seven of his targets for 158 yards. Gallup's 22.6 yards per target figure ranked fourth among all wideouts and he finished third in yards per route run. Touchdowns will be hard to come by in an offense that also features Amari Cooper and Ezekiel Elliott, but Gallup's superb 2019 debut puts him firmly in weekly WR3 territory, with significant upside if he continues to catch so well.

Now acting as the undisputed No. 1 receiver for the first time in his career, Tyrell Williams looked the part during Oakland's upset victory over Denver. Williams hauled in all six of his catchable targets and produced 105 yards and a touchdown. On top of those figures, Williams snatched up all three contested catches, which trailed only Michael Thomas, who was 4-for-4. It was only one game but Williams looks like a solid weekly WR2/3 who should see 7-9 targets per game.

Emmanuel Sanders showed no ill-effects from his Achilles injury, playing 57-of-64 snaps and posting a solid 5/86/1 line. Sanders and Courtland Sutton were the clear 1-2 for the Broncos against Oakland, with Sanders being targeted on Joe Flacco's only touchdown pass. Considering his depressed ADP, Sanders looks like he's going to be a tremendous value this season. Up next. the Broncos have a tough matchup against Chicago's elite defense.

Ted Ginn looked tremendous on Monday Night Football, catching all seven of his looks for 101 yards and a touchdown against Houston's overmatched secondary. The Texans allowed Ginn a cushion of 6.91 yards per route, which was the second-highest total from Week 1 and he was consistently able to make an impact downfield. Considering that the Rams afforded Curtis Samuel and D.J. Moore huge cushions last week, Ginn should be able to get open once again in Week 2.

After a quiet first half, Alshon Jeffery and the Eagles put the pedal to the metal after halftime and boat raced the overmatched Redskins. Jeffery caught 5-of-6 targets for 49 yards and a score while also adding a second touchdown on a Carson Wentz pitch that was recorded as a rushing score. Jeffery tends to be prone to the occasional drop but looks fully healthy and is a good bet to post WR2/3 numbers on a week-to-week basis.

No wideout had a worse opener than Donte Moncrief, who was completely neutralized by the Patriots' seconday. Moncrief only managed to catch three of his 10 targets for a lowly seven yards. He failed to come down with a contested-catch opportunity in the red zone and also committed another ugly drop. While the double-digit looks were encouraging, another dismal outing like Week 1 could cause the Steelers to sour on the free agent addition. A Week 2 tilt against a Seahawks' secondary that allowed the most passing yards in the league should be a good indicator of Moncrief's ability to overcome a rough opener.

Jameis Winston was atrocious in Week 1, which led to an awful showing for Mike Evans. Evans's five targets were his lowest total since Week 6 last year and he failed to catch any of the three contested catches that came his way. Evans didn't suffer any drops but appeared to be the intended target on Winston's game-sealing, fourth-quarter pick-six. For Evans to remain an elite WR1, these two will have to quickly get on the same page, which could be problematic traveling on short rest this Thursday.

The Bears also were also marred by lousy quarterback play, which led to poor True Catch Rate showings for both Taylor Gabriel and Allen Robinson. While Robinson actually had a solid fantasy outing with seven grabs and 102 yards, he barely caught half of his 13 targets. Gabriel fared even worse, reeling in 2-of-5 targets for just 24 yards. Robinson actually looked good and was able to overcome Trubisky's struggles, making him a solid weekly fantasy option. Gabriel, despite a 92% snap rate, is well off the fantasy radar.

You can't blame Breshad Perriman for Jameis Winston's struggles, but Perriman looked much like the first-round bust that he's been throughout most of his NFL tenure. Perriman only caught a pair of his five targets and committed another drop. His two receptions only resulted in 10 yards and an anemic 0.36 yards per route run, which was the third-worst figure in the league. Perriman is Tampa's No. 3 wideout for now but if he doesn't improve in a hurry, Bruce Arians won't hesitate to move on.

Christian Kirk only caught one-third of his dozen targets and was mostly neutralized by an awful first half by QB Kyler Murray. Thins improved after halftime as the Cardinals rebounded to tie Detroit. While Kirk had a drop and posted an awful 57.1% TCR score, let's draw encouragement from the 12 targets and Murray's improvements down the stretch.

Kenny Golladay got into the end zone but otherwise was mostly handled by Arizona's subpar secondary. Golladay only caught four of his nine looks for 42 yards, which trailed T.J. Hockenson, Danny Amendola, and Marvin Jones. Facing shadow coverage from Chargers' cornerback Casey Hayward Jr. in Week 2, Golladay isn't the best bet to have an immediate rebound.

This was probably the low water mark of the season for Davante Adams, who only caught four passes for 36 yards on Thursday Night Football. Adams is likely to draw Minnesota's Xavier Rhodes in coverage this week, but Adams has gotten into the end zone in each of his past three matchups against the Vikings. Don't overreact to one poor outing, Adams remains an elite, top-5 weekly play.

Tom Brady's 9.47 yards per attempt average from Week 1 was more of a benefit for New England's outside receivers, who both scored touchdowns. Slot receiver Julian Edelman drew his customary 11 targets, but only caught six balls for 83 yards. Last year, Edelman posted a True Catch Rate of 82.2%, making his lowly 60% score from Week One look like an anomaly. Also, the Patriots lined up without a tight end on 43% of their snaps, assuring Edelman will be the main benefactor of those underneath and across-the-middle passes that customarily would have gone to Rob Gronkowski.

The Vikings did a tremendous job shutting down Julio Jones, who was limited to six receptions and a lowly 5.2 yards per catch average. Jones somewhat salvaged his outing with a late touchdown grab, but otherwise posted his poorest fantasy outing since Baltimore held him to 2/18/0 line last November. With a Week 2 home game versus an Eagles' secondary that allowed Washington wideouts to catch 15 passes for 225 yards and two touchdowns last week, Jones is a prime bounce-back candidate. In his career, Jones averages over 116 receiving yards per game versus Philadelphia.