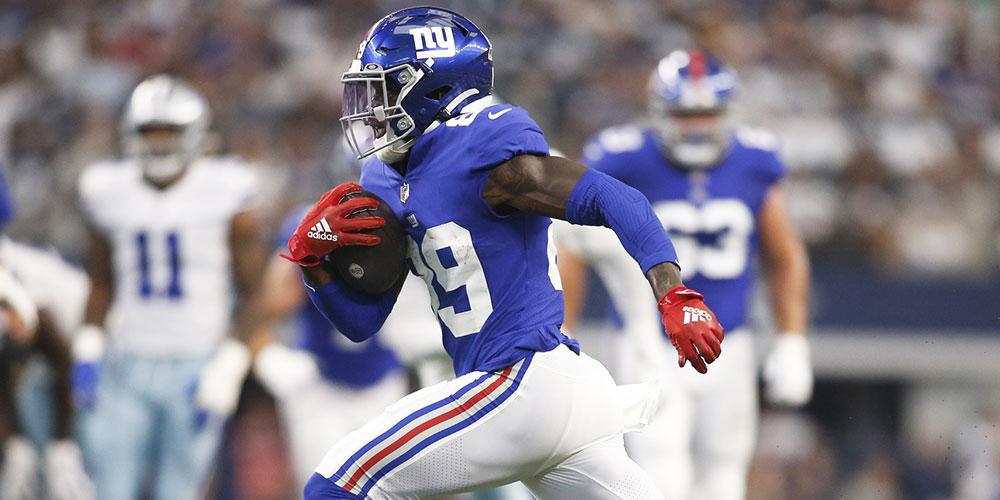 Fantasy Football is often a battle of attrition, and that is undoubtedly true this season. This week was another one where we lost some of our most valuable fantasy players to injury. We continue to lose running backs at an alarming rate, but luckily we have some excellent options available on the waiver wire to pick up that we can plug into our starting lineups. It's not just the running back position that is getting hit with injuries, we also lost several wide receivers, a couple of quarterbacks, and a few tight ends for good measure. If the injuries weren't enough to contend with, we also have bye weeks this week. Atlanta, New Orleans, New York Jets, and San Francisco are all off this week, so keep that in mind when you place waiver claims on players. If you had thoughts of adding any players from those teams in order to start this week, you're going to need to look elsewhere.

After back-to-back weeks of good production, it looked like Clyde Edwards-Helaire was on his way to justifying the hype that surrounded him coming into the league next year. But in the third quarter of Sunday night's game against the Bills CEH went down with a knee injury, after a nice catch and run. With CEH out for the next few weeks, Darrel Williams vaults into immediate RB2 status in fantasy. Williams was already capturing a 33.3% snap share prior to CEH's injury, and he'll now step into the starting role.

The only thing stopping Williams from being an every-week flex option was volume. Despite being out-snapped by a healthy margin Williams entered Sunday night's game with just three fewer targets than CEH (10-7), and he is the only running back on the roster to have any rushing attempts from within the five-yard line (3). Now that CEH is out, Williams will continue to see the high-value opportunities but now will also have the volume needed to become an RB2 every week. Despite the Chiefs' recent struggles they are still one of the most potent offenses in the league and will continue to put up points every week. This makes Williams the top waiver wire add this week.

After years of being a thorn in the side of more viable fantasy assets, it seems like Devontae Booker is going to get at least a week to carry the load all by his lonesome. Saquon Barkley suffered a gruesome-looking ankle sprain (which just looked worse than it was) and is expected to miss next week's action and possibly the following week as well. Barkley went down at the end of the first quarter, and Booker took over the primary running back duties. Booker scored two touchdowns, one receiving and one rushing, which is not something he's likely to repeat, but what's encouraging for fantasy purposes is the usage he saw after Barkley went down. Booker carried the ball on 16 of the 18 designed runs after Barkley went down for an 88% rushing share and saw an additional four targets. Booker was often used as the receiving back during his stints in Denver and Las Vegas, so even in what is very likely be a negative game script against the Rams next week, we should still expect him to produce in PPR leagues.

Last week I suggested picking up Herbert, but mostly as an insurance policy in case Damien Williams missed time due to a thigh bruise. That point ended up being moot with Williams practicing most of the week, and getting the start on Sunday. What I didn't foresee happening was that Herbert would actually see more snaps than Williams this week with both active. Herbert was on the field for 53% of the offensive plays this week compared to 48% for Williams. He also had more rushing attempts (18-16) and rushing yards (75 - 64) than Williams as well. Williams did score a rushing touchdown and saw three targets to Herbert's zero, and Williams outscored Herbert by 7.9 fantasy points on the week. The Bears are content with taking the air out of the football as long as Justin Fields is starting, he's averaged just 19 pass attempts per game in three starts, and going to try to run their way to victory. You would like to see Herbert involved in the passing game but you can't ignore the volume he received Sunday. He was given a full complement of carries, and with that volume, he's likely to see the end zone sooner than later.

Negative game scripts are what we want for our receivers in fantasy football. When teams are losing, they are forced to play catch up and air the ball out. The Broncos were forced to throw the ball 38 times after entering the fourth quarter down 24-6 Sunday. Another thing you like to see is your receivers seeing an increase in targets/target share week after week. Both of these factors came into play this week, with Tim Patrick seeing a season-high nine targets in Denver's loss to Pittsburgh Sunday, commanding a healthy 23.7% target share. Without Jerry Jeudy and K.J. Hamler on the field, Patrick has seen an increase in targets from four in the first two weeks to nine this week. Next week's matchup against the Raiders should force a game script that favors the pass yet again. The Raiders entered Sunday's action giving up the 13th most passing yards per game. Their ranking will improve after playing the Bears, but the Bears only attempted 21 passes Sunday, so that I would look at those results with a critical eye. Patrick has now scored at least 11.7 fantasy points in four of five games and continues to provide a safe floor every week for your roster.

Kadarius Toney loudly announced his presence this week. After absolutely torching the Dallas secondary, Toney lost his cool towards the end of Sunday's game against the Cowboys and found a way to overshadow his on-field performance.

#Giants WR Kadarius Toney has been ejected after throwing a punch at #Cowboys safety Damontae Kazee.pic.twitter.com/3IPWnCCr5r

The Giants are a MASH unit right now, losing Saquon Barkley to a nasty-looking ankle injury and Kenny Golladay to a knee injury (not to mention losing Daniel Jones to a concussion) while already being down Sterling Shepard and Darius Slayton. They need playmakers on offense, and that is exactly what Toney has shown himself to be. A week after setting career highs in targets, receptions, and receiving yards, Toney blew past those totals this week. Toney was targeted 13 times, hauled in 10 passes for 189 receiving yards while hogging a 34.2% target share this week. It's unlikely Toney can maintain a 34% target share, but he did see a 22% target share the week prior and has quickly become a focal point of the Giants offense. It's unknown when Shepard, Slayton, Barkley, and Golladay will return, but the Giants would be foolish if they don't continue to target the electric rookie that they spent a first-round pick on this past NFL Draft. Though he was considered a raw route runner coming out of college, he knew just enough on this play to completely spin the great Trevon Diggs.

Chasing Detroit Lions wide receiver production kind of feels like a game of "Whack-a-Mole" but I'm going to take one more crack at it. Amon Ra-St. Brown has had back-to-back weeks with eight targets, leading the Lions in targets in both of the last two games. He's cleared 65 receiving yards in both weeks and has scored over 13 fantasy points in back-to-back weeks. If his increased production wasn't enough to catch your eye, the Lions already thin wide receiver position became even thinner during the loss to the Vikings this week. Quintez Cephus broke his collarbone and is most likely finished for the 2021 season. The Lions now have St. Brown, Kalif Raymond, and no one else you have ever heard of unless you play in dynasty leagues, left at wide receiver, giving St. Brown a ton of opportunity to produce for the rest of this season.

If you've played in any dynasty fantasy football leagues the last couple of seasons you know the name Ricky Seals-Jones. Seals-Jones entered the league as a converted wide receiver, and the dynasty community fell in love with his size (6'5"), and (relative) speed. During his first three seasons, he had sporadic games, but was never able to put together any sustained runs of production, and was only active for two games in 2020 and saw just one target on the season. He joined the Washington Football Team for this season, and now he might have a legitimate opportunity to finally break out. Somehow still just 26 years old, Seals-Jones took over starting duties for the WFT when Logan Thomas was injured against Atlanta in the first quarter two weeks ago and had to be placed on the injured reserve. Seals-Jones saw a 93% target share against Atlanta, and then a 99% target share this week in his first start against New Orleans. Not only has he stepped into snaps, Seals-Jones has also stepped into the Logan Thomas target role as well. He was targeted four times in that Atlanta game and he was targeted eight times this week. Those eight targets represent a season-high for the tight end position for the Football Team. Thomas is slated to miss two more weeks and the Football team lost Curtis Samuel (again) to injury on Sunday, leaving an opportunity for Seals-Jones to produce as a low-end TE1 over the next two weeks.

Damien Harris is dealing with a rib injury, and also a severe case of fumbling, losing another one this week against the Texans, and costing himself and the Patriots a touchdown in the process. Harris now has as many fumbles lost as rushing touchdowns on the season (2), which is not a ratio you hope to ever achieve as a football player. Going back to the 2020 season, Harris has now fumbled in three of his last seven games.

Damien Harris fumbles in the ENDZONE 😭 (via @NFL)pic.twitter.com/vEIWFcXspC

Between the rib injury and the fumbling Harris played on just 33% of offensive snaps this week, and Rhamondre Steveson played a season-high 34% of offensive plays for the Patriots. Stevenson had 11 rushing attempts Sunday nearly matching Harris's 14. Sunday's game was Stevenson's first since he fumbled in Week 1, so his leash will be short if he does take over for Harris, but he's worth stashing as it's hard to imagine Bill Belichick has much if any, trust left in Harris. The Patriots don't have much in the way of competition if Stevenson were handed the starting role. J.J. Taylor is not built (5'6", 185 lbs.) to carry a starter's compliments of rushing attempts (and has had his own ball security issues), and Brandon Bolden has seen very little usage as a runner, partly due to how valuable he is on special teams. Given the choice, I would avoid this backfield altogether, but with the number of injuries at the running back position, you may not have that luxury.