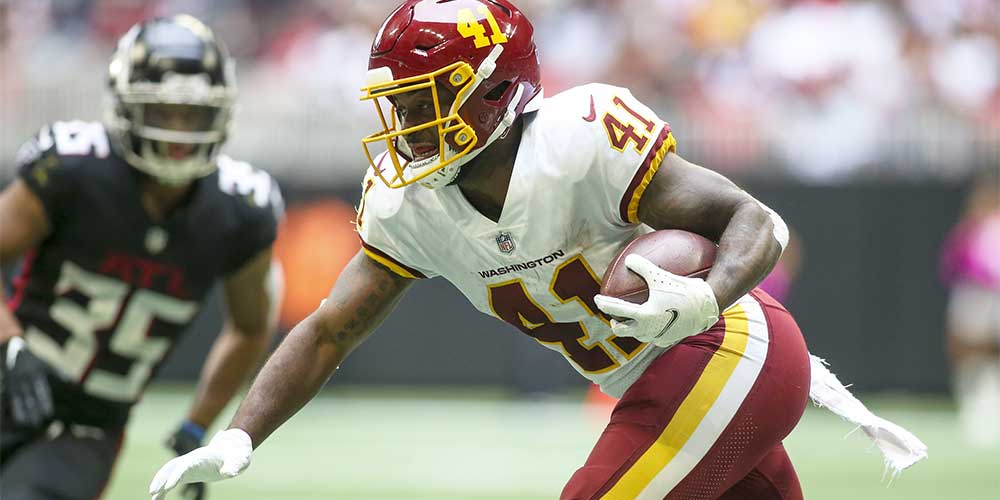 The first week of byes is now out of the way. If you read last week's column, I hope you took my advice and picked up at least one of Khalil Herbert, Darrel Williams, and Devontae Booker. They are all still available in about 30-35% of leagues, so make sure you check your leagues' waivers to see if you can still pick them up. Bye weeks continue in Week 7, with several high-powered offenses taking the week off. The Bills, Cowboys, Jaguars, Chargers, Vikings, and Steelers are all off in Week 7, and that will leave some big holes in our rosters to account for. We will continue to scour the waiver wire to find the best plug-and-play options for you, whether you need them or not. Remember, sometimes the best offense is a good defense, and picking up a player to stop a league mate from doing so is often a sound strategy.

The QB12 overall (PPG), Jameis Winston, gets a good matchup next Monday night. Winston has been a bit up and down this season, scoring 13.5 fantasy points or fewer on three occasions, but he's also put up over 25.8 fantasy points in his other two games. There doesn't seem to be much in between with his production, but facing a Seahawks team that has allowed the 13th most fantasy points per game to the quarterback position, should lead to one of his better weeks. Winston is the best available quarterback on the waiver wire, and as a bonus, he's already had his bye week (Week 5), so you won't need to worry about him sitting any more weeks the rest of this season.

With Antonio Gibson's shin causing him to miss giant chunks of Sunday's game, J.D. McKissic saw his most extensive usage of the season. McKissic was targeted ten times and had eight rushing attempts on Sunday after entering the week averaging seven opportunities (rushing attempts + targets) per game. He rushed for 45 yards, averaging a robust 5.6 yards per rushing attempt on Sunday, and turned those ten targets into eight receptions for another 65 yards, putting up 110 total scrimmage yards and scoring 19 points in full-point PPR leagues. Gibson's shin injury has bothered him for several weeks, and Washington could decide they need to let him rest it next week (or longer), giving McKissic a clear path to RB2 or better production. Next week could be one of those "or better" weeks with the Football team slated to visit the Green Bay Packers. Washington will be in a negative game script and playing catch up against the scoreboard, leading to plenty of targets for McKissic. McKissic was targeted at least eight times in 16 games for the Football Team last year and set a career-high with 80 receptions, and next week's game against the Packers set's up to be a big target share week for him.

If your roster has been decimated by injury at the running back position, or you drafted using a "Zero-RB" approach and guessed wrong on what backups or satellite backs would break out, I have you covered. Kareem Hunt suffered a severe calf injury on Sunday and is expected to miss the next month. Nick Chubb wouldn't have practiced if the Browns held practice Monday. If Chubb can't play Thursday, that means that D'Ernest Johnson will get the start. I wouldn't want to have to start Johnson under most circumstances, but with six teams on bye and the number of injuries we've seen at the position, you might not have a choice. This is a "use only in emergency" situation, but you might be in emergency mode.

If you play in a league with deep rosters and Johnson is already rostered, you could focus on Demetric Felton. Felton is an undersized rookie who would seemingly take over the pass-catching role in a committee that no longer includes Hunt. This is the deepest of dives, but you should at least have him on your radar with Hunt out for at least the next four games.

Perhaps you're one of the lucky fantasy football players whose roster is relatively intact, allowing you to look to the future. Michael Gallup is available in nearly half of Sleeper and ESPN leagues, and he is the type of pedigreed talent rarely find available on your waiver wire this late in the season. During the 2019 season, Gallup averaged 15.2 fantasy points per game and averaged 10.8 points per game last year despite Dak Prescott missing ten games. The Cowboys do have a lot of mouths to feed, with Ceedee Lamb, Amari Cooper, and Dalton Schultz all seeing at least 6.2 targets per game, which could limit Gallup's upside. But the situation is basically the same as last year, except with Dak Prescott under center, and Gallup was able to secure seven targets a game last season. It's also true that Dallas isn't throwing as much as they did last year, with 3.7 few pass attempts per game last year, but they still rank in the top half of the league, averaging 36.2 pass attempts per game. Dallas is on a bye this week, so get a little sneaky and pick up Gallup with an eye towards the rest of the season, and not just the upcoming week like some of your league mates may be forced to.

Most times, I won't suggest you pick up a player based on just one strong week. Once a player puts ups back to back weeks of strong production, though, I will take notice. Donovan People-Jones now has two weeks in a row that he's played at least 68% of the offensive snaps, seen at least five targets, and accounted for over 70 receiving yards. That is noticeable production. Against the Cardinals, Peoples-Jones put up the first 100 receiving yard day of his career (101 yards) and added two receiving touchdowns on his way to 25+ fantasy points. Peoples-Jones, a former five-star college recruit, fell to the sixth round of the 2020 draft after an underwhelming college career, is a sublime athlete with excellent speed and elite burst and agility.

Jarvis Landry could return as soon as next week, which could bite into DPJ's targets, or the Browns could look to concentrate their targets and not target ten different players as they did Sunday against the Cardinals. Landry and Odell Beckham can both be released after the 2021 season with minimal dead cap, giving the Browns even more reason to continue to feature DPJ, so they know exactly shat they have in him. Of more immediate concern is Odell Beckham's "Did not Practice" designation on Monday (though the Browns didn't hold a practice, they're still required to report on who would have practiced). If Beckham can't go, that would leave DPJ as the WR1 for the Browns Thursday night.

Okay, I know I just said that I wouldn't suggest you pick up a player based on one week...but pick up Rashod Bateman. Bateman suffered an injured groin in training camp that ended up needing surgery and cost him the first five weeks of the season, so you might need a refresher on how good Bateman could be. He broke out at the tender age of 18.8 years old in college while accruing a dominator rating of 40% (80th percentile). The Ravens thought enough of him to spend a first-round draft pick on him drafting him with the 27th overall pick.

His production may have been modest in his first week back, but his usage was highly encouraging. Bateman tied Mark Andrews for the team lead in targets with six, hauling in four receptions for 29 yards. Those six targets represented a 22% target share Sunday as the Ravens attempted just 27 passes, their second-lowest total of the year. Don't be too concerned about the low passing volume Sunday; entering this game, the Ravens had averaged 33.4 pass attempts per gameThehe Ravens dominated the Chargeron Sunday s and were content to lean on the rushing attack, gashing them for 187 yards while passing for just 167 yards. There will be much closer games to come that will force the Ravens to pass more often, which will increase Bateman's raw targets. If you have the roster space to add, Bateman do so this week with an eye towards the rest of the season.

This is one for deep leagues only; I'm talking 12-14 teams and/or in dynasty leagues. When the Jaguars lost D.J. Chark for the season, the natural assumption was that it would lead to an expanded role for Laviska Shenault. While that's a bit true, what it has led to is Jamal Agnew becoming a weapon in the Jaguars' offense. Agnew has turned into the third receiving option on the offense. Sunday, he was targeted six times and converted five of those into 78 receiving yards. That's 13 targets in the past two weeks for Agnew. If you happen to play in a league that gives you points for kick return yardage, Agnew can help you there as well, he's had three weeks where he's had at least 55 yards in kick return yardage. In your redraft leagues, you can likely hold off on picking Agnew up since the Jaguars are on bye in Week 7, but in dynasty leagues, make sure you get your bids in this week.

Don't look now, but O.J. Howard might be becoming a thing. After two sub 20% snap shares performances to begin his 2021 season, Howard has been on the field for at least 59% of offensive snaps the past three weeks and 65% of snaps in two of the last three weeks. With Rob Gronkowski out of action the past three weeks with broken ribs and a punctured lung, Howard has out-snapped Cameron Brate every week. Howard has also seen an increase in targets during these past three weeks. After being targeted three times during his first three games, Howard has ten targets over the past two games, including seven against the Eagles this past Thursday. Howard converted those additional targets into 16.9 fantasy points on the week, scoring a touchdown and hauling in six receptions for 49 yards and a touchdown. I wouldn't suggest you bid more than 10% of your available FAAB on Howard. Rob Gronkowski is slated to return in the next couple of weeks, and the Buccaneers boast three stud wide receivers, limiting the upside of other receiving options in the offense. Still, Howard is worth at least a minimal bid with bye weeks limiting your streaming tight end options.

I suggested Ricky Seals-Jones last week, but based on his rostership %, not many people listened to me. That's okay, you can still pick him up this week. Seals-Jones saw another six targets this week, bringing his three-week total to 19 targets, excellent usage for a tight end. He scored a 39-yard touchdown on Sunday on four receptions and 58 receiving yards. That's likely more than enough t give Seals-Jones a top 12 scoring week at the tight end position. This might be your last chance to pick Seals-Jones up, so don't miss out this week.