Is recency bias influencing the decisions you make with your fantasy football team? We have all had players we regret drafting or those that we wish we had. You can apply the same scenario to the waiver wire. The parallels between fantasy football and investing fascinate me. Recency bias, as it relates to investing, manifests itself in the direction the stock market is heading. You have the utmost confidence that the market or an individual stock will continue to go up or down. These biases lead you down a road where certain decisions could erase your earning potential. The stakes for your fantasy football team does not have the long term implications of your investment portfolio. This article will build a case on why you should target Devonta Freeman in fantasy drafts this summer.

Were you aware that Freeman is only 27 years old? He is his physical prime and has dealt with multiple injuries since being selected in the fourth round of the 2014 NFL Draft. Freeman’s longevity is being questioned, but he is expected to be in a participant in the Falcons organized team activities. The peak of an NFL running back from a PPR point perspective (230 points or more) is from age 23 to 28. 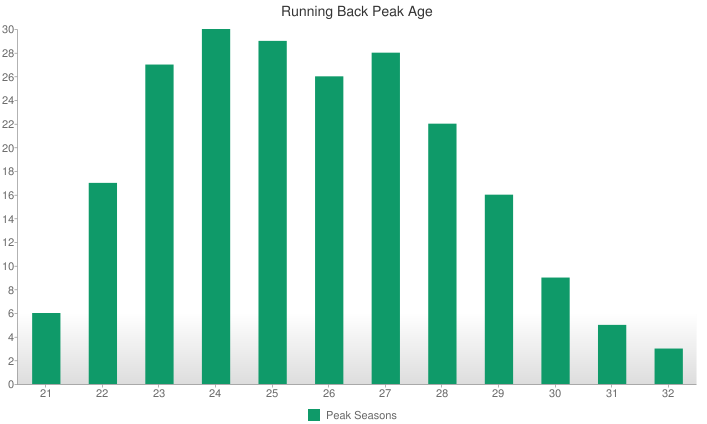 There have been 28 running backs since 2000 that have had a peak season at age 27. They averaged 366 opportunities (rushing attempts plus targets), 296 PPR fantasy points, and 15.5 games played their age 27 seasons.

And now, you’re thinking there is a low probability that Freeman sees the type of opportunities that LaDainian Tomlinson, Marshall Faulk, Larry Johnson, and Eddie George saw. I agree with you. A more realistic expectation ranges from 280 to 300. But wait, there’s more:

Freeman is a Bargain at his Current ADP

Are you on the hunt for players who could outperform their draft position? Look no further than Freeman. It is surprising to see a running back with his statistical body of work at this ADP. Freeman is two seasons removed from finishing as the RB6 In PPR formats. Here are some of the running backs being currently being selected ahead of him in Best Ball fantasy drafts according to the FFPC: 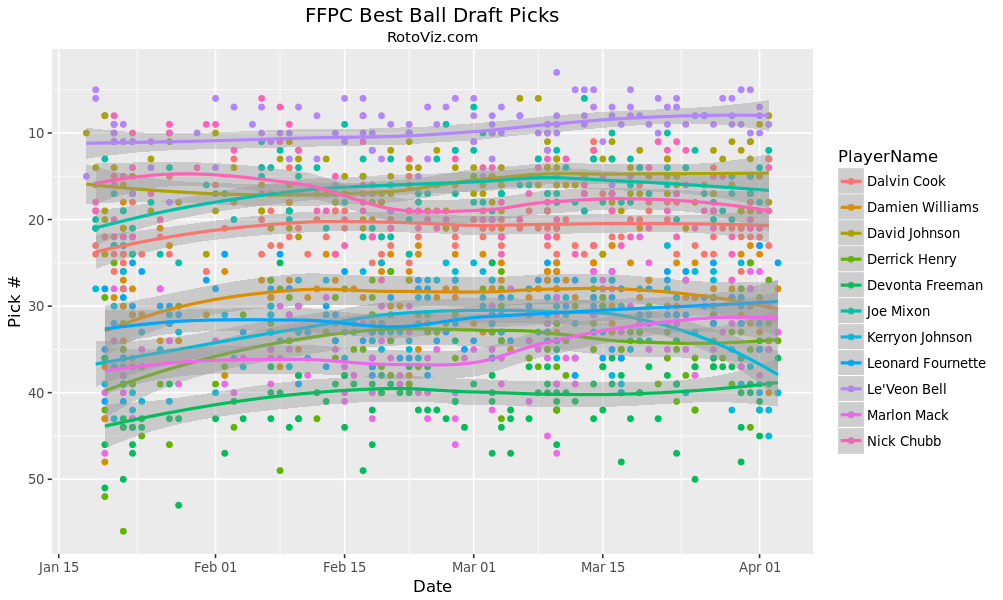 Freeman has the potential to finish the 2019 season as an RB1. Let’s examine Freeman’s fantasy point production to uncover what made him different from other running backs.

Did you know that Freeman piled up 821.2 PPR fantasy points from 2015 to 2017 in 45 games? This was more than these other notable running backs:

Freeman had a positive rushing and receiving fantasy points over expectation during this time frame. He averaged nearly 20 opportunities (Rushing attempts and targets) per game. Four out of the five running backs mentioned above were given more opportunities per game than Freeman. You must be wondering what caused his PPR fantasy point production to drop off over the last two seasons.

Did Sarkisian derail the Falcons offense?

Freeman had his most success with former Falcons offensive coordinator Kyle Shanahan. The running backs in his offense averaged nearly 24 rushing attempts and eight targets per game from 2015 to 2016. The Falcons averaged 374.2 total yards per game in 2015 which ranked fifth in the NFL. This increased to 416.4 total yards per game in 2016 which ranked second. Shanahan parlayed this success into a head coaching opportunity with the San Francisco 49ers. The Falcons replaced him with Steve Sarkisian in 2017 who had no previous NFL coaching experience. The team struggled in his first season running the offense in 2017 averaging 358 total yards per game. Sarkisian did see an increase to 389 total yards per game last season. The most notable difference between the Shanahan (27.6) and Sarkisian (23.7) regimes is in points scored per game.

The Falcons running backs saw fewer opportunities as a rusher and a receiver in Sarkisian’s offense and were less effective. This played a factor in Freeman’s lackluster 2017 season and 2018 was lost due to injuries. He signed a five year $41.25 million contract extension with the Falcons back in 2017. The contract is structured in a way that provides the team a potential out in 2020. Freeman has a ton of pressure on him to perform in 2019 with the departure of Tevin Coleman in free agency and Ito Smith waiting in the wings. Freeman and Smith will form the Falcons new running back by committee this season.

The return of a healthy Freeman is a good thing for the Falcons, but they also continue to rebuild their offensive line. This unit ranked 24th in Adjusted Line Yards according to Football Outsiders. It would be prudent for the Falcons to continue to strengthen the offensive line through the NFL Draft after signing two guards in free agency. Will Freeman have a chance to shine in new offensive coordinator Dirk Koetter’s offense?

Falcons head coach Dan Quinn has been vocal about his desire to run the football more this season. The selection of Koetter with his pass-first reputation came as a surprise to many.

Koetter’s familiarity with Falcons quarterback Matt Ryan and wide receiver Julio Jones from his first stint as the team’s offensive coordinator is an obvious plus. Stick with me here, because he has a history of maximizing the talent on his roster going back to his time as the offensive coordinator of the Jacksonville Jaguars.

The engine of Koetter’s offense during his time in Jacksonville was Maurice Jones-Drew. Did you know that his Jaguars offense cumulatively ranked third in the NFL in rushing yards from 2007 to 2011? Jones-Drew averaged 103.3 total yards and 18 PPR fantasy points per game during this time frame.

The running backs Koetter worked with in Atlanta included Michael Turner and Steven Jackson. Both were past their physical primes. In Tampa Bay, Koetter had Doug Martin and Peyton Barber. Martin has never recaptured the magic from his rookie season and Barber, an undrafted free agent, is nothing special. Freeman is the most talented running back Koetter has had since Jones-Drew. Quinn taking over the playcalling duties of the Falcons defense will put them in a position to bounce back. With Koetter running the offense it’s unlikely that Atlanta will finish in the top five in pass play percentage like they did in 2018. Many expect Freeman to lead the Falcons backfield in touches.

Freeman is the running back you never knew you wanted at his current ADP. You position yourself to win fantasy football leagues by looking ahead and not through the rearview mirror. There always players who outperform their ADP that are key contributors to your team in your journey to a championship. Freeman could be on those players for you in 2019.

Data Sources for this article provided by FantasyData, Pro Football Reference, and RotoViz.

Thanks for reading and please sign up for FantasyData Premium