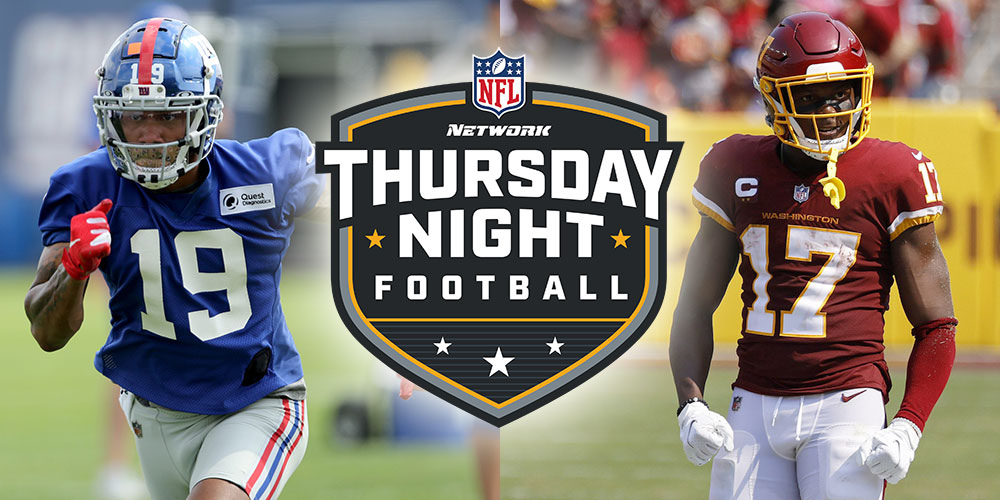 Week two begins with an NFC East battle between the New York Giants and the Washington Football Team (WFT). Both teams enter this matchup at 0-1 and are looking to turn the season around after disappointing losses. Washington is also entering this game with a new man under center, Taylor Heinicke. Will Heinicke carry the weight while Ryan Fitzpatrick recovers from his injury, or will Daniel Jones lead the New York Giants to victory? Let's break down how each team will develop a game plan against their opponent to win the game.

How Do The New York Giants Win The Game?

As always, the New York Giants will only go as far as Daniel Jones takes them. The significant factor with Daniel Jones is always the turnovers and possible fumbles against a vicious pass rush such as the WFT. If the Giants can handle Chase Young, Jonathan Allen, and Montez Sweat, Daniel Jones should have enough time to hit his receivers throughout the night. The ants will need their passing attack to win this game as the WFT struggled to stop the Chargers passing attack in week one.

How Do The Washington Football Team Win This Game?

Without Ryan Fitzpatrick, the WFT turns to Taylor Heinicke to lead the team to victory. Without the gunslinging aspect of Fitzpatrick, we are looking at a team mirroring the 2020 offense. The game plan should revolve around Heinicke being a game manager who relies on his running game and easy route options from his tight end to proceed down the field. Expect a lot of volume from Antonio Gibson and Logan Thomas while the WFT leans on their defense to bring this victory home.

Now that we have discussed how each team should plan for Thursday Night Football, we have to discuss the correct plays for your DFS Showdown Lineup.

Hints & Tips From our Optimizer and Stacking Page

With the implied total of this game being around 40 points, Vegas does not expect a shootout, nor should we as DFS players. Daniel Jones has upside most weeks due to his ability to rush, however in a divisional game and already having fumbling woes that have continued from last season. Therefore, using Jones in your lineup could potentially leave you lacking in your point column.

Taylor Heinicke also has rushing upside and has the better matchup against the Giants. Looking back at week one, Teddy Bridgewater was able to point up 20.5 points in DraftKings against this Giants team, and I believe Heinicke, with his weapons, can mirror that performance.

Saquon Barkley is someone who gives me concern as a fantasy manager when creating my lineups.  He was not used to his full potential with only ten total attempts(and one target) in week one. Could that have been the strategy to keep him fresh on this quick turnaround? Honestly, only Joe Judge knows the answer to that. With his price point, I will be looking elsewhere to create my lineup.

With the young Heinicke under center this week, the WFT should lean on their dynamic second-year back. He touted the rock 20 times and added three receptions to that total. He should be the focal point of his team. Let's not forget the Giants relinquished 146 yards and a touchdown last week to the running back position.

J.D. McKissic had one carry and one incomplete target last week. Last year he was a product of Alex Smith being the check down king; however, I don't see that path for him in this game, so avoid this dart throw.

Terry Mclaurin finished last week with only four targets for 62 yards. Without Curtis Samuel in the lineup, we do expect more from him as fantasy football managers. Terry Mclaurin is the clear number one in this offense, and Heinicke should focus on him and Logan Thomas to help facilitate the passing offense. Mclaurin should bounce back and have more than the 10.2 fantasy points he produced in week one.

Kenny Golladay had a stat line similar to Terry Mclaurin in week one. He had four receptions on six targets for 64 yards.  The let to Golladay in this matchup is how the Chargers exposed the WFT in the passing game. Washington allowed the second-most yards to the position last week with 278 yards. Golladay could outperform our expectations this week on Thursday Night Football.

Sterling Shepard was a star in week one, and I expect more of the same in week two. WFT allowed 24 receptions to the wide receiver position last week, the second-most in the league. Shepard should be able to feast while the defense focuses its efforts on Golladay and Barkley.

Darius Slayton is perfect if you like exposure to the Giants passing game for cheaper prices. He was targeted seven times last week and can be a high reward type player. Depending on your roster construction, Slayton may need to enter your lineup.

Kadarius Toney only had two targets and had negative yards. He will need to show it to me before I put him in my lineups.

Dyami Brown could be your cheap dart throw of the week. Although his stat line is nothing to write home about, his snap share in week one was 92.7%. Brown could be a sneaky dart throw if you run out of salary for your lineup.

Logan Thomas falls into the tight end category of "look for a touchdown". He did just that last week, and the Giants allowed tight ends in week one to finish with ten receptions, 85 yards, and a touchdown. With Curtis Samuel out and Heinicke needed a safe target, Logan Thomas could be in line for a good night in fantasy football.

Due to injury, Evan Engram was still sideline on the Tuesday reports and shouldn't be in your lineup this week. Kyle Rudolph did see five targets last week, if you want to play against the grain, you can take a swing on Rudolph, but I don't recommend doing that even if the WFT allowed Jared Cook to have a decent stat line in week one.

In this pile of options, the only one I plan on using Thursday night is the Washington defense due to the potential of sacks and turnovers. When using a defense, always chase a higher sack total for the points, and also, sack lead to turnover potential. With Daniel Jones having a propensity for turnovers, the WFT defense is a solid play.