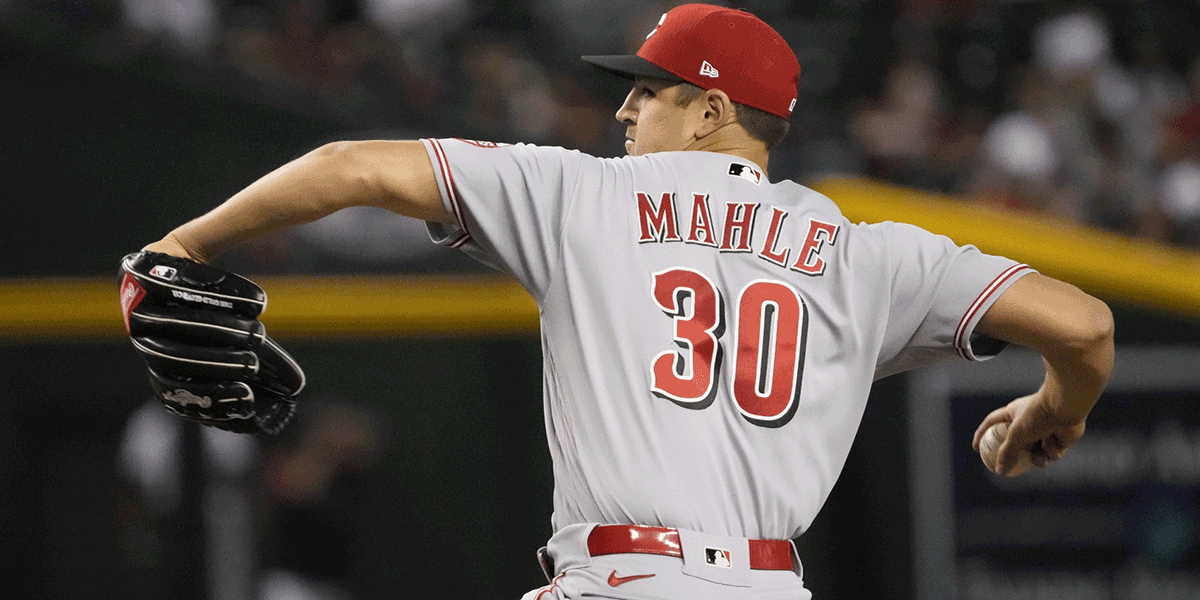 The major league rosters will reduce to 13 pitchers starting Monday, June 20, after teams held onto an additional pitcher on their roster to begin the 2022 season. With innings pitched and pitches per start trending downwards, it's safe to wonder how that will impact a team's plans for their pitchers. 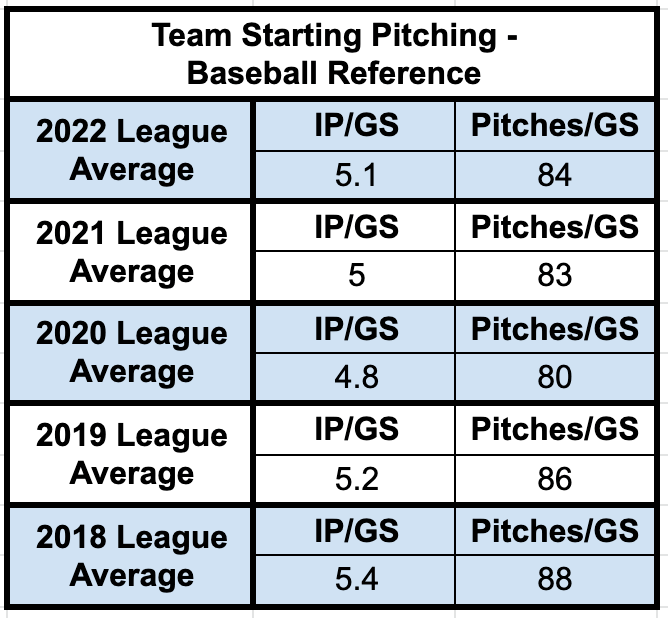 Over the past few seasons, the league averages fell, not including 2020. The Tampa Bay Rays come to mind, and the data aligns with the team finishing towards the bottom in pitches per game by their starters. 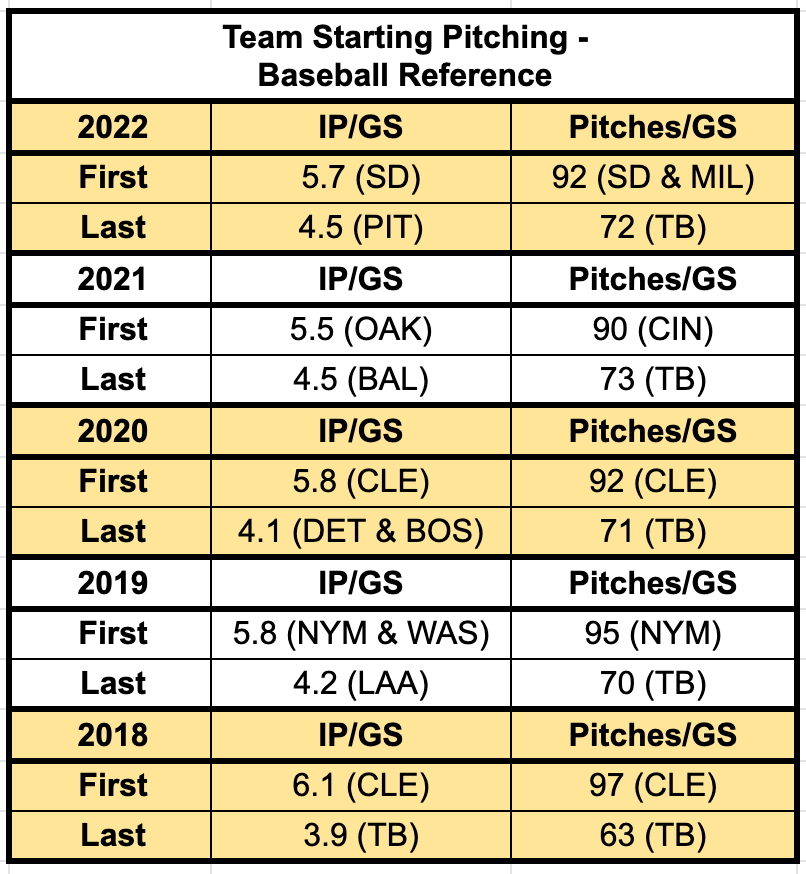 With the roster cutdowns and offenses heating up, we'll remind fantasy managers to be cautious in streaming pitchers. However, if you find a few skills, indicators, and friendly matchups, it might be worth the risk with someone like Mitch Keller or Ross Stripling over the past two weeks.

As usual, we'll look at four hot and cold players with one pitcher and hitter under each section. What do the underlying metrics indicate? Can these players sustain the hot surge? Or should we expect a bounceback for these cold players? 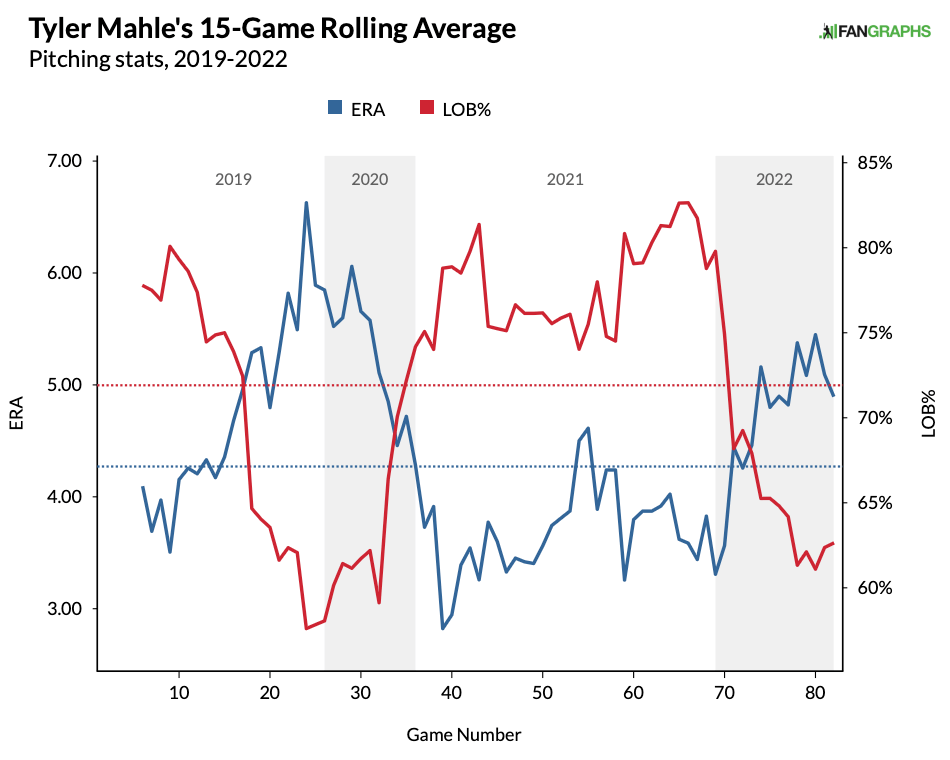 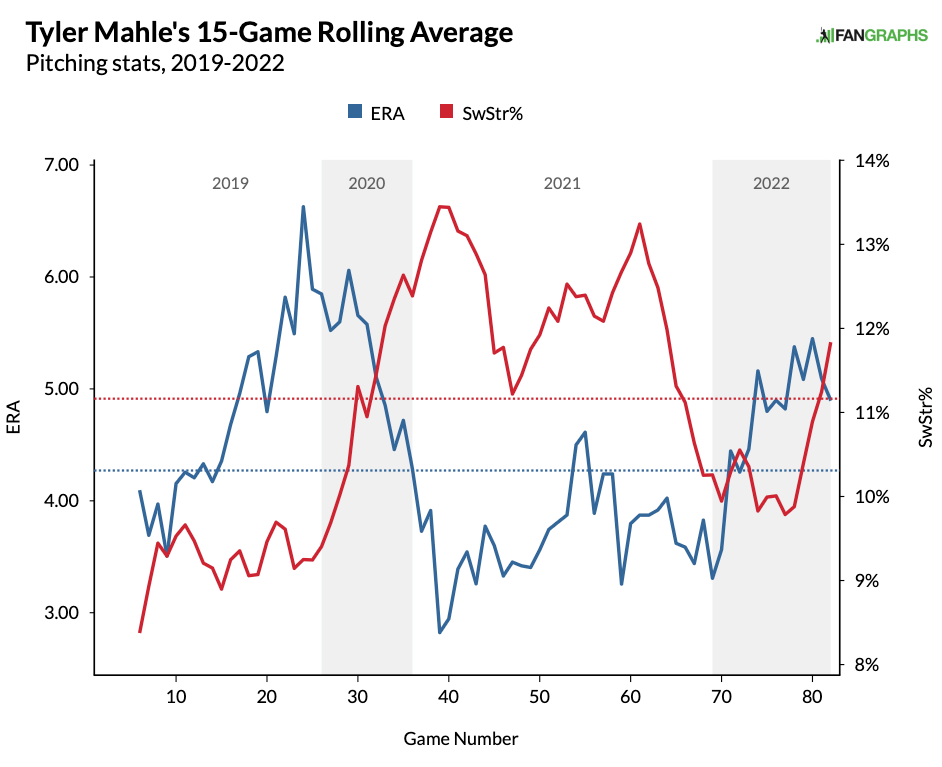 Unsurprisingly, Mahle's metrics regressed positively to 34.6% K% and 4.9% BB%, though he faced the Diamondbacks twice and Nationals once. The BABIP dropped to .255, with the LOB% improving to 92.1%. Mahle's SwStr% also increased by nearly three percentage points to 14% in June.

It's a small sample in June, but Mahle seemingly lowered the slider usage from 15% to 8.8% with more cutters and four-seamers. Mahle's stuff typically looked above-average, but it's positive to see the results follow. 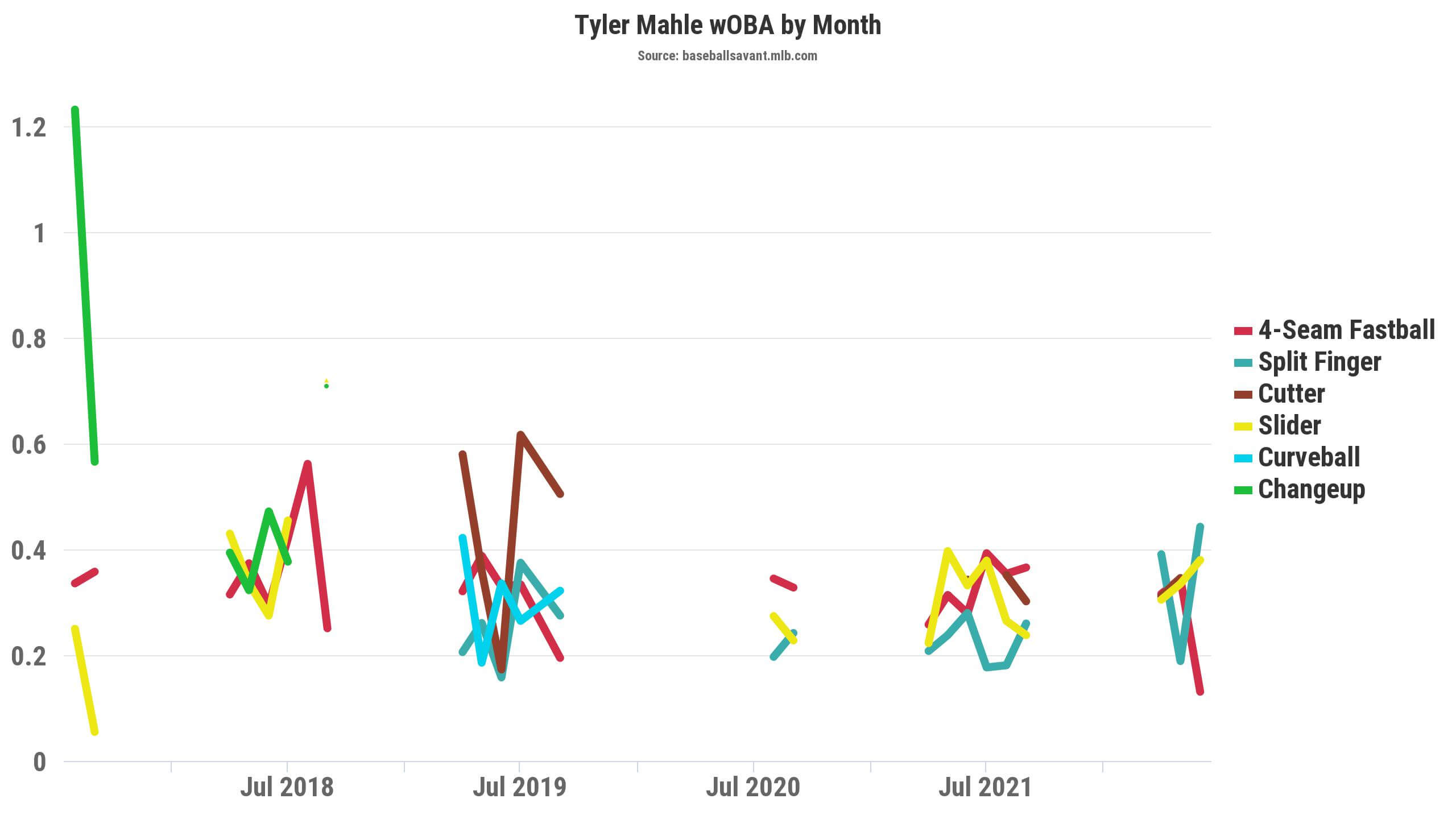 Mahle's slider previously posted better results than in 2022, but it's been inconsistent. The four-seamer and splitter remain similar from a movement profile, with the fastball having above-average vertical and horizontal movement. That aligns with the quality SwStr% and .179 BA, .331 SLG, and .274 wOBA.

Mahle's cutter might be something to monitor with 3.9 inches versus more drop than the average. However, the 25.8 inches of vertical movement remained similar to the 27.3 inches in 2021.

After back-to-back starts with ten or more strikeouts, this is the nature of Mahle's profile with some ups and downs. We can only hope Mahle will have more ups than downs, plus a chance the Reds move him to a better team for wins and park factors. The BAT projects Mahle to regress in the ratios and LOB% with an ERA of 4.21 and WHIP at 1.28. Overall, the ERA estimators hint at buying high on Mahle with a 3.24 FIP, 3.83 xFIP, and 3.70 SIERA. 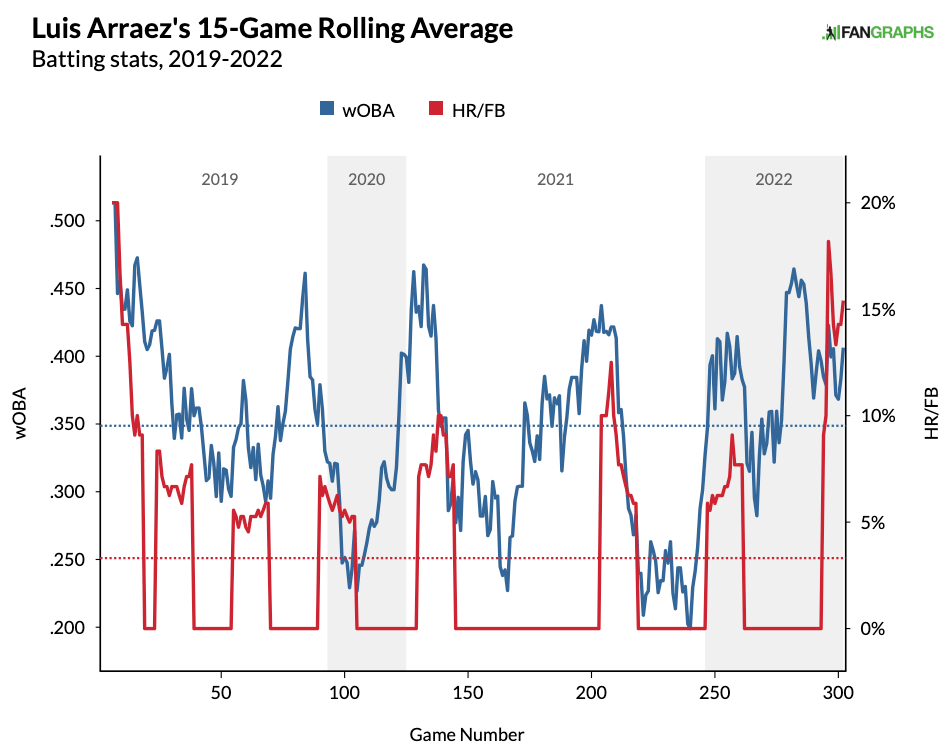 Arráez hardly provides any pop, but the hit tool and batted ball skills rank highly amongst hitters. After 310 plate appearances (65%) at leadoff in 2021, Arráez has 42% at leadoff in 2022. However, batting first or second 77% of the time in 2022 versus 66% in 2021 adds to the value via runs. Arráez's earned auction value of $17 places him near hitters like José Abreu, Nelson Cruz, and Tommy Pham. If Arráez maintains value near those hitters, it's a massive win given his ADP around pick 300. 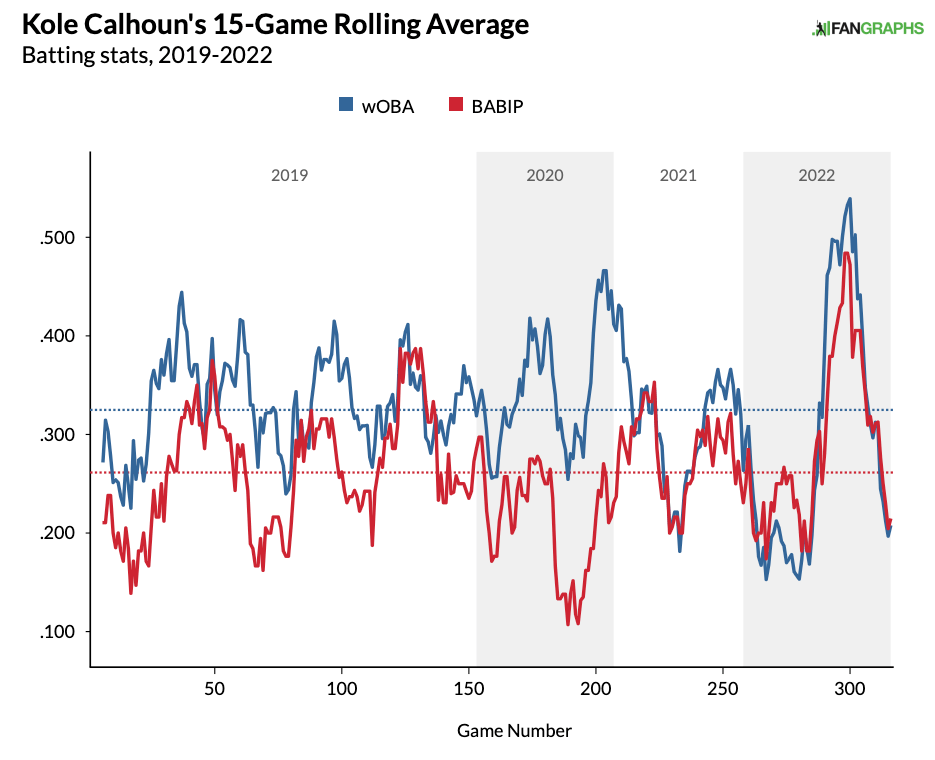 Meanwhile, Calhoun's BABIP dipped to .189 in June, with the Barrel% dropping to 8.1%. The plate discipline metrics look similar, so it's likely misfortune for Calhoun in June. Sure, the 29.2% HR/FB% in May couldn't sustain with 0% in June and a season-long rate of 12.7%. 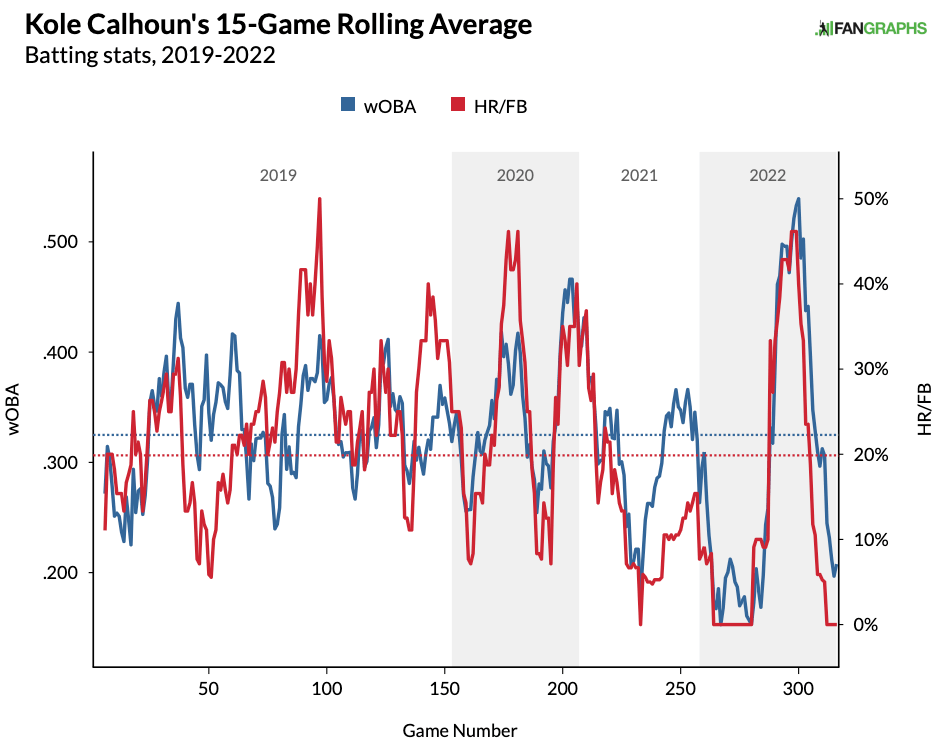 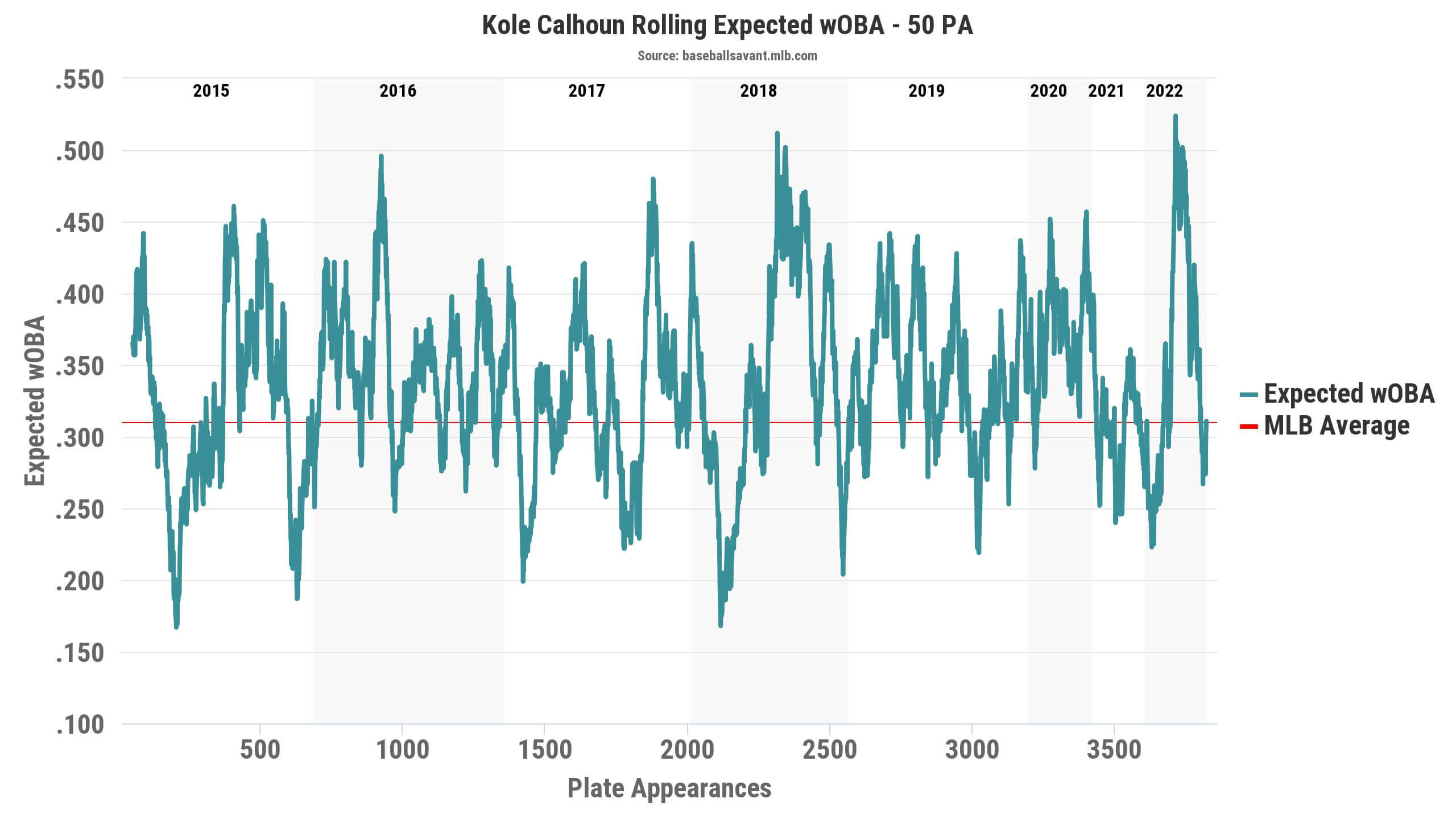 Calhoun's 12.4% Barrel% and 8.3% Barrel/PA align with the 2019 and 2020 seasons with a high HR/FB%. He hardly lacked the contact quality metrics, though it's a matter of consistency. We notice Calhoun's xwOBA increased to career-best levels, though it tumbled in June.

Lately, it seems Calhoun moved to a platoon role with the recent cold stretch, making it possible to find Calhoun on the waiver wire in deeper leagues. THE BAT X projects Calhoun for 11 home runs, 34 runs, 36 RBI, and one stolen base with a .230 BA. With an earned auction value of $5, Calhoun seems like a streaming hitter to cut in deeper formats for another hitter streamer.

On the surface, the results look brutal, with an 8.40 ERA and 1.80 WHIP in June for Aaron Ashby. However, the once high-end Brewers rotation with Corbin Burnes, Brandon Woodruff, Eric Lauer, and Freddy Peralta lost two of their top options. Ashby remained one of the top sleeper pitchers heading into 2022 and finally received his chance to start. 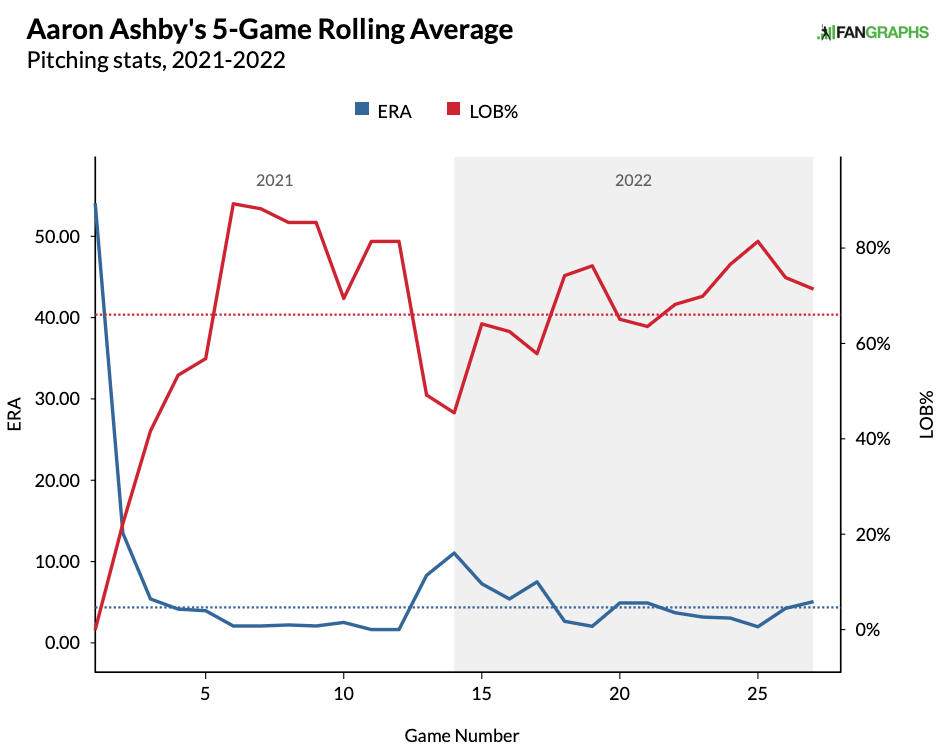 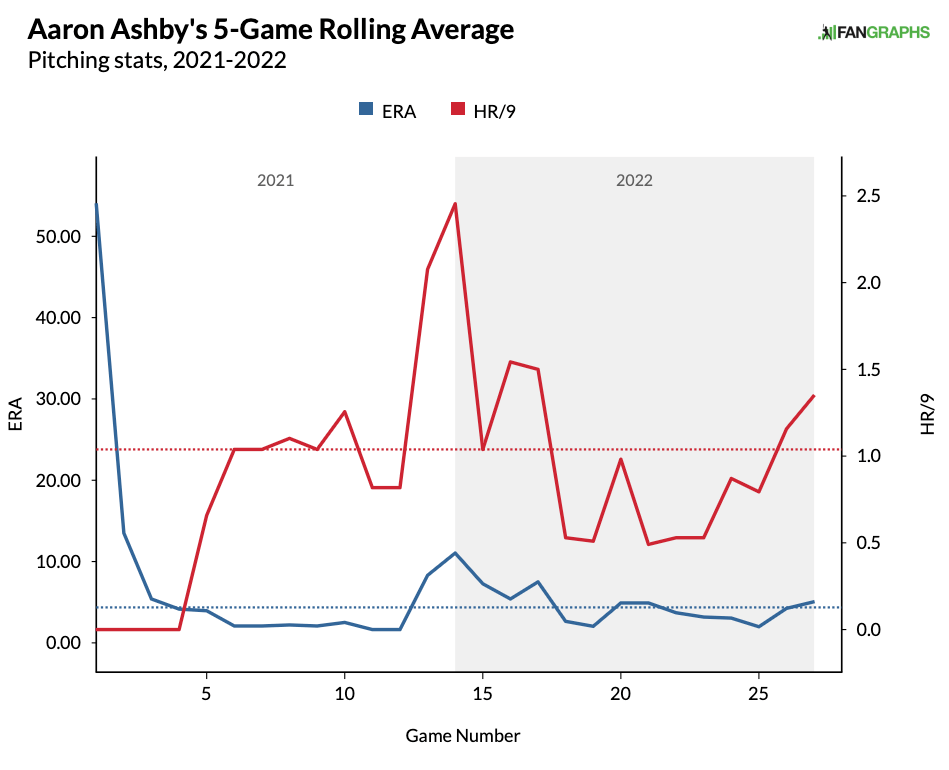 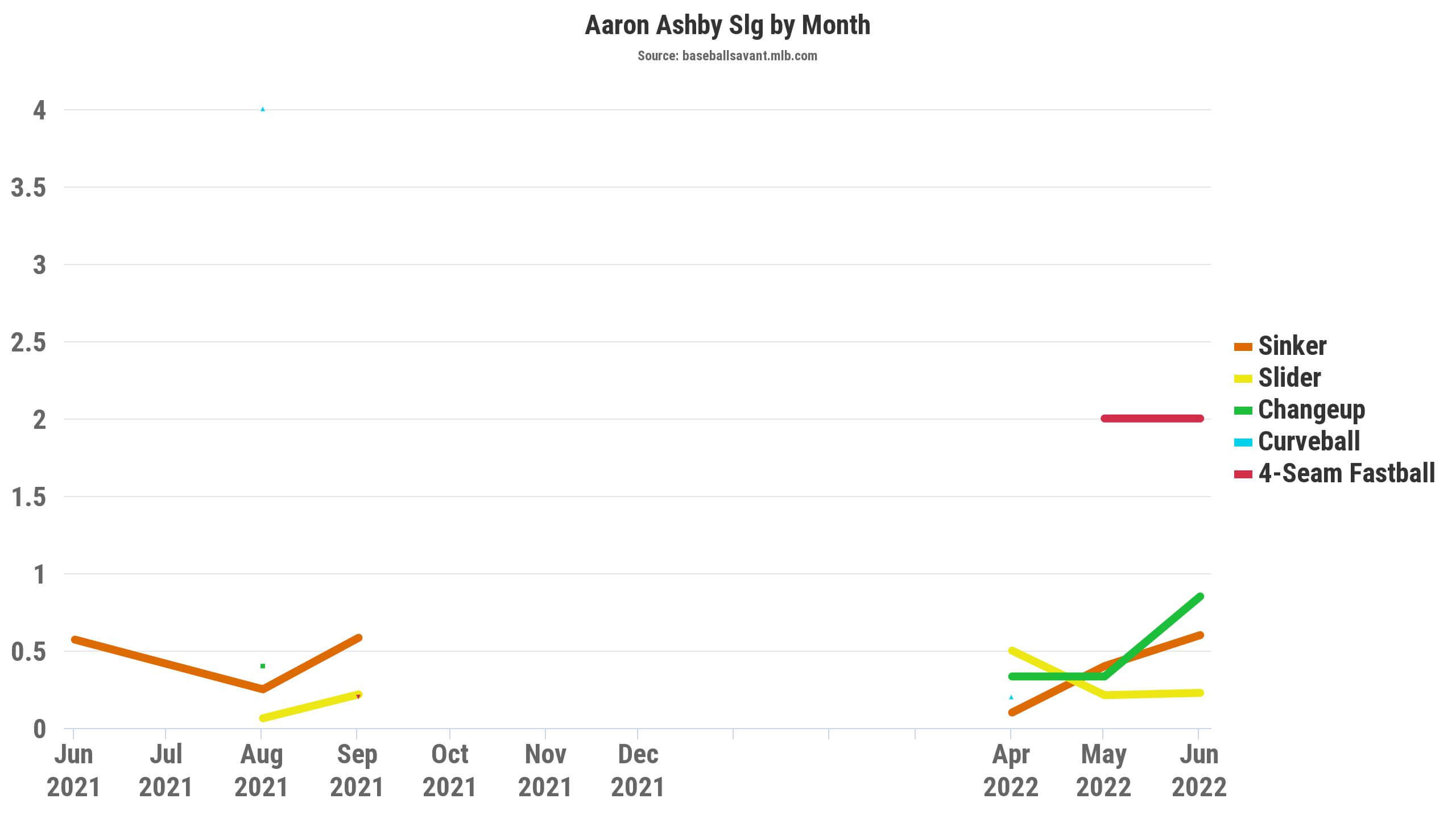 Ashby possesses quality stuff, evidenced by three pitches with a double-digit SwStr% in the slider, changeup, and curveball. Although the curveball remains elite with a .067 BA, .067 SLG, and .134 wOBA, Ashby only throws that pitch 11.8% of the time. Ashby increased the curveball usage against righties and lefties with above-average vertical movement (6.7 inches vs. Avg.). 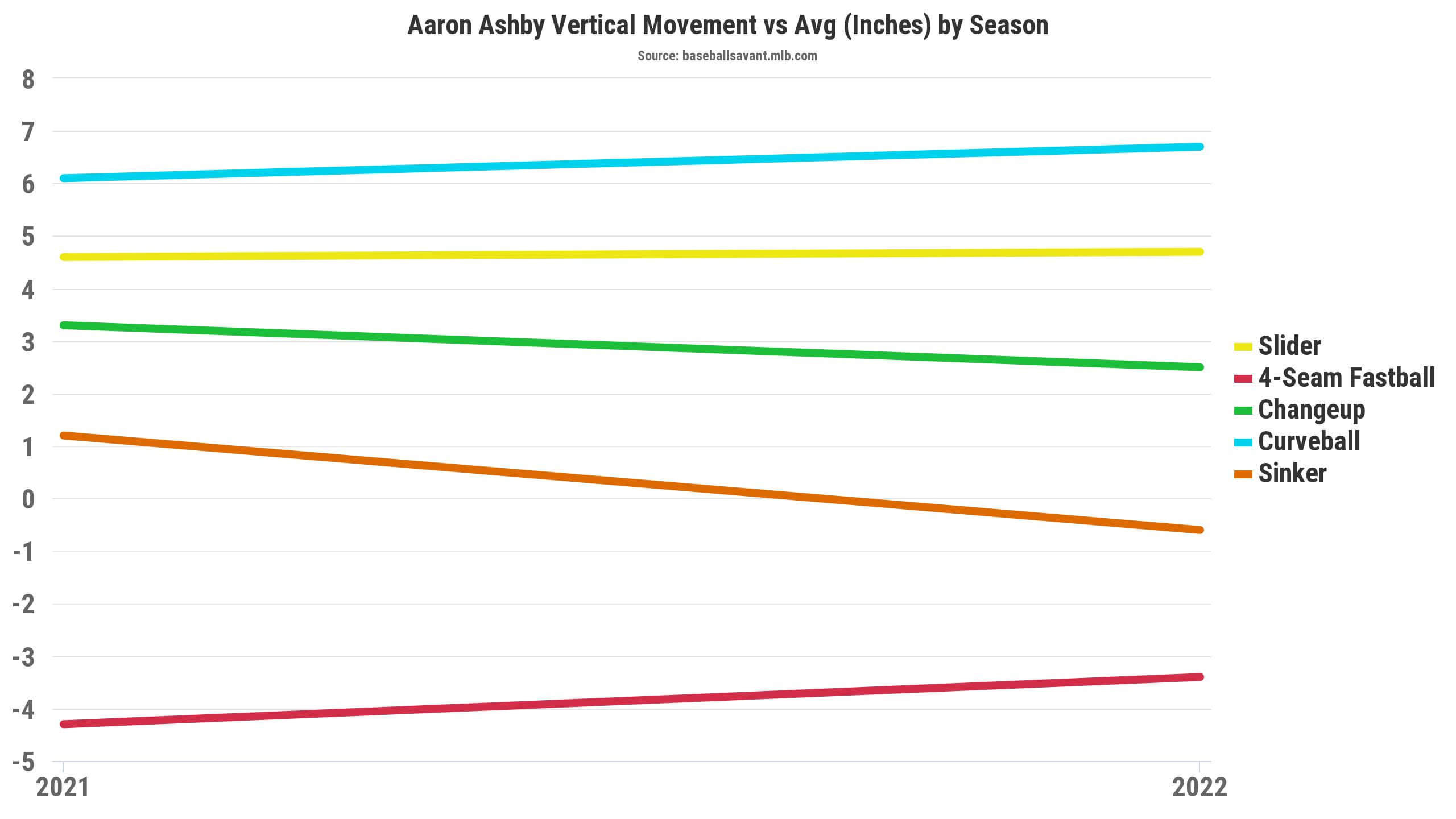 Most of Ashby's pitches have similar movement profiles in 2021 and 2022, with minor changes in the sinker. The sinker vertically and horizontally moves less in 2022. However, Ashby's sinker possesses 20.2 inches of vertical drop and 15.5 inches of horizontal break down around two inches. The underlying metrics point at Ashby rocking the stuff over control or command profile.

One of the organizations to trust with pitching includes the Brewers based on their track record with Corbin Burnes, Brandon Woodruff, and Freddy Peralta. The expected ERA points to optimism given the 3.65 FIP, 3.08 xFIP, and 3.28 SIERA. Assuming Ashby's BABIP and LOB% regress, the surface metrics should help, though it's unclear on future expectations.