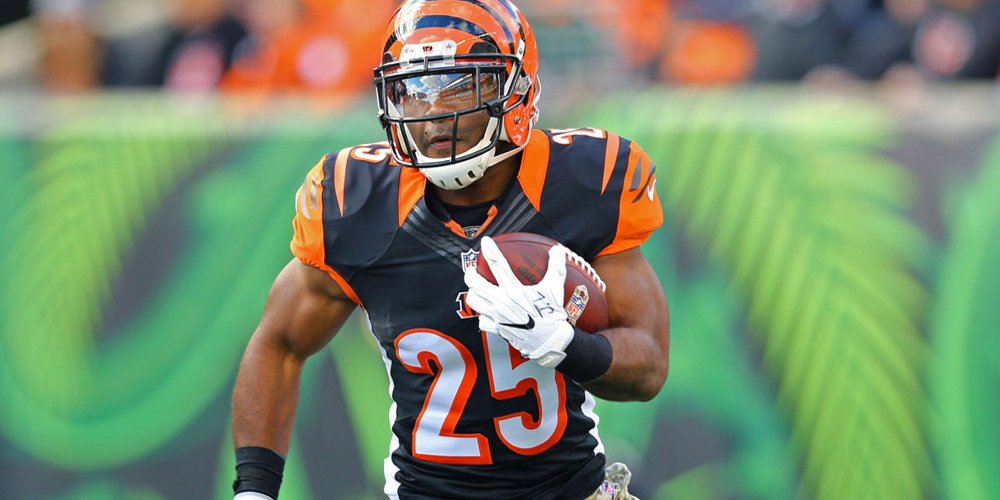 Seemingly every week a waiver wire sleeper emerges and bursts onto the scene, surprising fantasy managers with an impressive outing worthy enough for roster consideration. The aftermath usually results in a large rush to the waiver wires, trying to place in your FAAB and outbid your opponents, or hope that your waiver wire priority is high enough to secure the player.

Simultaneously, it is imperative not to overreact and overspend on a free agent just because of last week’s performance or mid-week hype. Managers need to be fluid and flexible because situations can change daily. Perhaps a player broke out because the usual starter was out of that game with an injury. On the other hand, waiver wire gems could be the missing pieces needed for the final push down the road.

Let’s get to it. Here are my Week 7 Sleepers:

Giovani Bernard (Cincinnati Bengals) – Bernard possesses sneaky game-script dependent upside, especially in the passing game. Bernard was able to capitalize on a red-zone carry, producing double-digit fantasy points for the first time all season last week. Bernard has made the most of his limited touches, ranking third among running backs in Fantasy Points Per Attempt.

**Update: Joe Mixon Ruled Out For Week 7 - Joe Mixon (foot) has been ruled out for Week 7 against the Browns. Mixon missed practice all week and just didn't give himself a chance to be active against Cleveland this Sunday.

If workhorse running back Joe Mixon were to miss the Week 7 game or is limited in any capacity, Bernard could step up to the plate and deliver for fantasy managers. Bernard is a risky flex option with upside if Mixon were to be ruled out of the contest against the Cleveland Browns.

JaMycal Hasty (San Francisco 49ers) – Currently rostered in only 2.3% of ESPN leagues, the UDFA from Baylor showcased glimpses of his potential last week, handling nine carries for 37 yards. Although Jerick McKinnon is in line to handle the Niners’ featured running back duties, Hasty very well could be sprinkled into the mix. If he can capitalize on his potentially small workload and continue to impress his coaches, Hasty’s role should expand even more as the season progresses.

Jeremy McNichols (Tennessee Titans) – McNichols is coming off his second-straight game logging 38% or more of the Titans offensive snaps, handling eight or more touches in both games. With rookie running back Darrynton Evans on IR, McNichols has been serving as the change-of-pace and pass-catching option, relieving star ball carrier Derrick Henry of his duties when Henry needs rest. McNichols is a desperation dart-throws for GMs in critical need of a running back option this week. 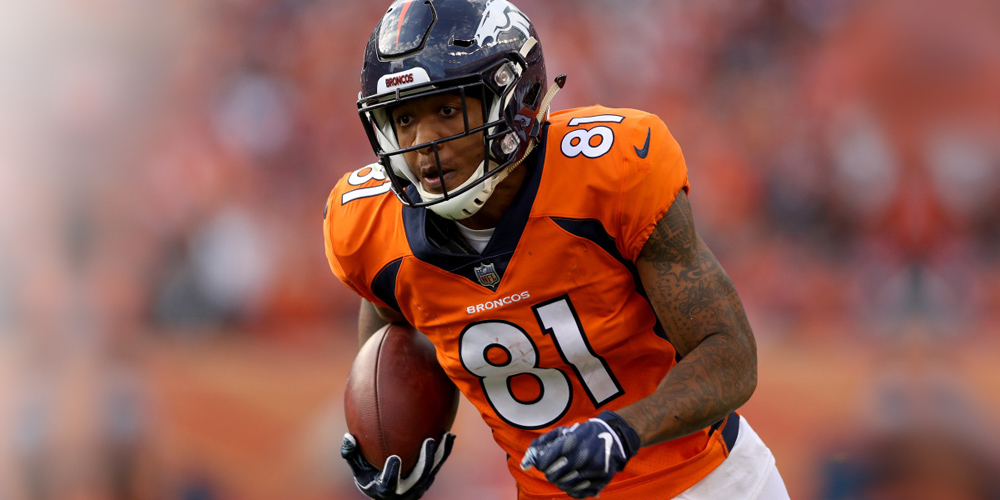 Tim Patrick (Denver Broncos) – Patrick is coming off back-to-back 100-yard receiving performances and should be rostered in most leagues moving forward. Patrick enjoyed his best game of the season against a stout Patriots secondary, with an impressive 25.3 YPC, while logging 91% of offensive snaps. Patrick has proven to be a big-play target for Denver, ranking sixth among wide receivers in Average Target Distance and True Catch Rating.Patrick has established himself as a dependable pass catcher in an offense with less competition after Cortland Sutton’s season-ending injury. Patrick is a safe WR3/flex play with upside to produce at a high level once again.

Keelan Cole Sr. (Jacksonville Jaguars) – Perhaps the most overlooked wide receiver in the league right now, Cole has been reliable throughout the first stretch of the season, quietly producing WR2 numbers. Cole is coming off his best game of the season in which he hauled in six receptions for 143 yards, good enough for 20 PPR points. Cole excels in Contested Catch situations while ranking seventh in Target Separation, an indication of his ability to create space and capitalize, guiding him to a WR21 rank on the season. Cole should continue to serve as a reliable option for quarterback Gardner Minshew. A high-upside WR2 play this week, trust Cole with confidence as he battles against a Los Angeles Chargers defense allowing the fourth-most passing yards per game to opponents

Gabriel Davis (Buffalo Bills) – Davis has flashed his potential this season, particularly with a four catch for 81-yard performance against the Las Vegas Raiders. With John Brown seemingly a non-factor after returning from injury, Davis’ time to usurp the WR2 spot might be his for the taking. Davis has made the most of his opportunities, accurately depicted by his 2.52 Fantasy Point Per Target, eighth highest among wide receivers. Davis is a desperation boom or bust play for those in dire need of a player with the chance to top double-digit fantasy numbers. The Bills also face the struggling New York Jets, which bodes well for a possible Davis explosion.

Darren Fells (Houston Texans) – After taking over as the lone starting tight end for the Houston Texans after Jordan Akins went down with an injury, Darren Fells has proven to be a viable part of the Texans offense. Not only has Fells logged 80% or more of the Texans offensive snaps since Akins’s injury, but Fells has also made the most of his opportunity. Currently, Fells ranks third in Fantasy Points Per Target, Yards Per Reception and Yards Per Target, while ranking second in Target Separation.He is coming off back-to-back weeks of scoring a touchdown, including an impressive performance last week in which he caught six catches for 85 yards and a touchdown, finishing the week as the fifth-highest scoring tight end. Akins has not practiced this week, which sets Fells up to handle the majority of tight end responsibilities with another chance for a TE1 performance.

Anthony Firkser (Tennessee Titans) – Firkser was able to seize his opportunity after Jonnu Smith exited the game last week with a minor injury. If Smith were to miss the Week 7 contest, or if Smith is not 100%, Firkser will see a bump once again. Firkser was the TE1 last week, hauling in eight receptions for 113 yards and a touchdown, good enough for 25.3 PPR points. The backup tight end has been efficient this season, leading tight ends in Hog Rate and ranking fifth in Target Accuracy. He ranks second in Yards Per Route, another indication of his productivity this season. Frisker has been dependable for the Titans as well, characterized by his eighth-highest True Catch Rate, fourth-most Contested Targets, and the most Contest Receptions among tight ends, complying an 88.9% Contested Catch Rating, third most. Firkser is a risky dart throw if Smith plays; without Jonnu in the lineup, Firkser is a fringe TE1.

Derek Carr (Las Vegas Raiders) – Coming off his second-straight 300-yard passing performance, Derek Carr will look to continue his impressive play in Week 7. Carr has proven his efficiency as a passer once again, leading the NFL in Completion Percentage, which gives Carr a safe floor in fantasy leagues. Carr also ranks sixth in passing yards per game and has thrown only one interception this season, another indication that Carr can produce at an extremely impactful level. Although Carr faces a strong Tampa Bay defensive unit, Carr should be counted on for a low-end QB1 performance. With many starters on a bye, managers can feel confident streaming Carr this week.

Kyle Allen (Washington Football Team) – After stepping into the starting quarterback position following Dwayne Haskin's benching, Kyle Allen’s performance has been rocky behind the helm. Allen looks to step up his game in a choice matchup against a struggling Dallas Cowboys defense. Allen might not throw for 300 yards, but if he can score a couple of touchdowns and keep the Washington Football Team in positive game script, Allen could find himself having a solid outing this Sunday.

Jimmy Garoppolo (San Francisco 49ers) – Jimmy Garoppolo’s 2020 campaign has not gone as expected for the quarterback of the defending NFC champions. Hampered by a nagging ankle injury, Garoppolo has not executed at the same level as he did the previous year. After his strongest performance of the season last week, tossing three touchdowns for over 250 yards and no turnovers, Garoppolo will look to build on that performance and rebound from his shaky start of the season. Despite some ups-and-downs, Garoppolo has been proficient for the Niners when needed most, ranking fifth in Touchdown Rate and Protection Rate. If the contest against the Patriots is a close game in Week 7, Garoppolo should find the ball in his hands when it matters most, and if he can capitalize, he will align himself for a productive fantasy game. There is some risk in starting Garoppolo, but his floor is safer than most other options on the wire.