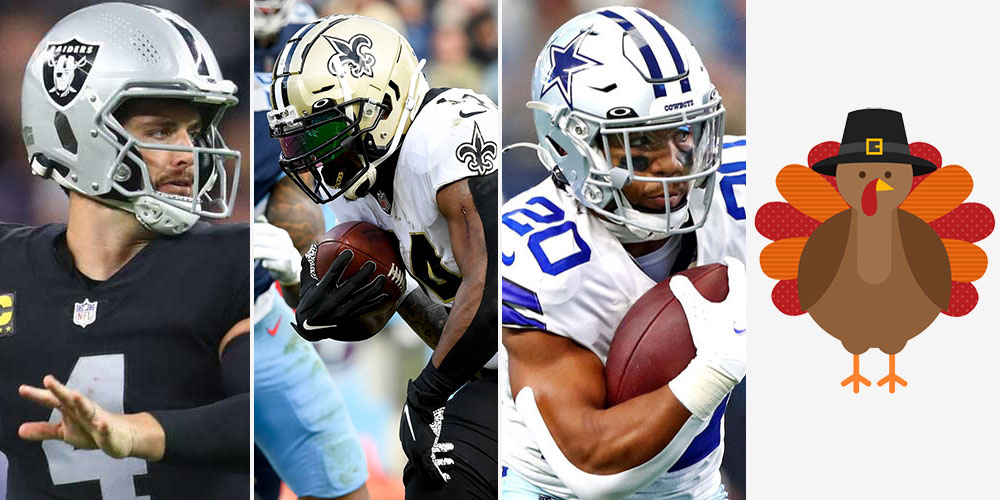 We have a three-game helping of NFL games to consume during our family gatherings on Thursday. Only one of the three games looks to be competitive according to Vegas and that is the contest between the Chicago Bears and the Detroit Lions. The Bears are a three-point road favorite in Detroit. The other two games have a spread of 6.5 or more. There should be plenty of fantasy goodness however and we will give you our best plays of the day.

Despite being a small slate, we are still going to provide you with two quarterbacks, three running backs, three receivers, and two tight ends to choose from. This should cover roughly 1/3rd of the player pool for the day. Mini slates are difficult to navigate, and you often need to go against the consensus to see any kind of ROI (return on investment). Without further ado, here are our faves.

Josh Allen will be the highest owned quarterback (≈31%) on the slate and rightfully so. New Orleans has given up the ninth most points per game to the position on the season and the second-most over the past four weeks. Allen and the Bills are coming off a crushing home defeat at the hands of the Indianapolis Colts and will be looking to right the ship. The versatile quarterback averages the most points of the quarterbacks and despite his team's struggles, manages to produce for fantasy purposes week in and week out.

The second highest owned quarterback will likely be Dak Prescott (≈24%) and with other options such as Derek Carr, Andy Dalton, Trevor Siemian, and Jared Goff available, we can see why ownership will be heavy on these two. This is not the spot to try and differentiate your lineup. Like with Allen, Prescott is coming off a crushing loss. The Raiders are middle of the pack against the position, but the Cowboys have the highest total on the board at 29. Prescott had his worst performance of the year in Week 11 with just 5.6 points. That may scare some players away and keep the ownership palpable. He has been a stud outside of Week 2 and last week, averaging 26.17 points in his other seven contests.

The Detroit Lions have been better against the run recently but are still allowing the fifth most DK points to the position. Enter the Chicago Bears and David Montgomery. Justin Fields has already been ruled out meaning Andy Dalton will get the start. Matt Nagy is allegedly coaching for his job as well. Look for him to do whatever it takes to win and that should involve a heavy dose of “Monty” on Thursday. Montgomery will be highly owned (≈55%) but you may regret fading him here. As is the case with Prescott, ownership may be driven down due to recent poor performances.

Surprisingly the ownership for Mark Ingram is projected to be around 35%. There are not many other appealing options so in a way this does make sense. We are all aware of the performance Jonathan Taylor just had against what was the best rush defense in the league. Looking closer at the numbers though we see that Buffalo has not faced a murderer's row of backs. Derrick Henry had a huge game against them as well. With Alvin Kamara likely to sit for a second straight game, look for Ingram to get the lion's share of carries in Week 12. The veteran running back has gone over 16.3 DK points in consecutive weeks. The matchup and price will likely scare some away and this could be a leverage play in larger tournaments.

This is a play we like to help differentiate your lineup on a small slate. Tony Pollard is projected to only be 13% owned. Ezekiel Elliott is nursing a knee injury and this game could get out of hand early. We mentioned the total for Dallas sits at 29 and they are 7 point favorites. Even when Zeke is healthy, Pollard gets his share of touches and is also an adept receiver out of the backfield. With Amari Cooper out and CeeDee Lamb questionable, the Cowboys will be looking for other players to step up. One of them should be Pollard. We will look at another player we like to have a larger role later in this article. Pollard has a 15 to 20 point upside at a reasonable cost. Take advantage of players gravitating towards the bigger names on the slate.

The Buffalo Bills have the second-highest total on this slate at 25.75 points. A good place to get a piece of this game at a low cost is by rostering Emmanuel Sanders (≈21% owned) against his former team in New Orleans. Many will pair up Josh Allen with Stefon Diggs or Cole Beasley. We would avoid Beasley on this slate as he has only seen seven targets the past two games since Dawson Knox returned from injury. The journeyman receiver is seeing 5.4 targets over his past five games played. The Saints are allowing the 10th most DK points to the position since Week 7 (34.4 per) and have one of the best defenses against the run. Look for the Bills to attack through the air and for the former Saint to be heavily involved.

There are not a lot of other teams on this slate that have struggled against receivers. The Chicago Bears have the 7th most points to wideouts, but Detroit has no one to speak of worth taking a gamble on outside of Amon-Ra St. Brown. This leaves us with few other choices. Hunter Renfrow (≈33% rostered) has been surprisingly consistent of late, averaging 13.95 over his past four and 13.3 on the season. The Dallas Cowboys are stellar against the run and are a seven-point favorite so look for Carr and the Raiders to have to take to the air in this one. Furthermore, Renfrow put up 17.9 and 17.6 points in Week 9 and Week 10 respectively so the upside is there for him.

It appears as though CeeDee Lamb will make it through concussion protocol in time for the game against the Raiders. If he does, he will likely be the highest owned wideout on the slate. We mentioned earlier that Amari Cooper is out. That will leave Lamb as the alpha receiver and should see a ton of targets. One of the issues with the play here is the matchup. The Raiders allow the third-fewest points to wide receivers in the league. This is the reason we like Pollard and another player from Dallas a little bit more here. The talent for the Oklahoma grad is matchup proof, however, hence the mention here as a top play.

We spoke earlier about the Cowboys prowess against the run. One way to attack them is via the tight end position. For the season, they are allowing  14.5 points to the position, ninth-worst in the NFL. Darren Waller is the TE4 in terms of DK points averaged per game and is coming off a 21.6 points performance in Week 11 against the Cincinnati Bengals. Waller will be the highest rostered tight end (≈40%) on the slate but has seen 8.67 targets per game over the past three and turned that volume into 14.73 points despite not scoring a touchdown. Look for the touchdown drought to end in Week 12 and fade him at your own risk.

If CeeDee Lamb ends up being ruled out, Dalton Schultz becomes one of our favorite plays on Thursday. We still like him a lot even if Lamb plays due to the low ownership projection (≈21%). The reason we like this play is because of the poor matchup for Lamb and the other wideouts mentioned above and the fact that the Raiders have allowed the third-most fantasy points to tight ends in 2021. Schultz is coming off 8 targets in Week 11 in a game that saw no Cooper and Lamb leave at halftime. Look for the same type of usage in Week 12 and potentially even more if CeeDee ends up sitting or limited.