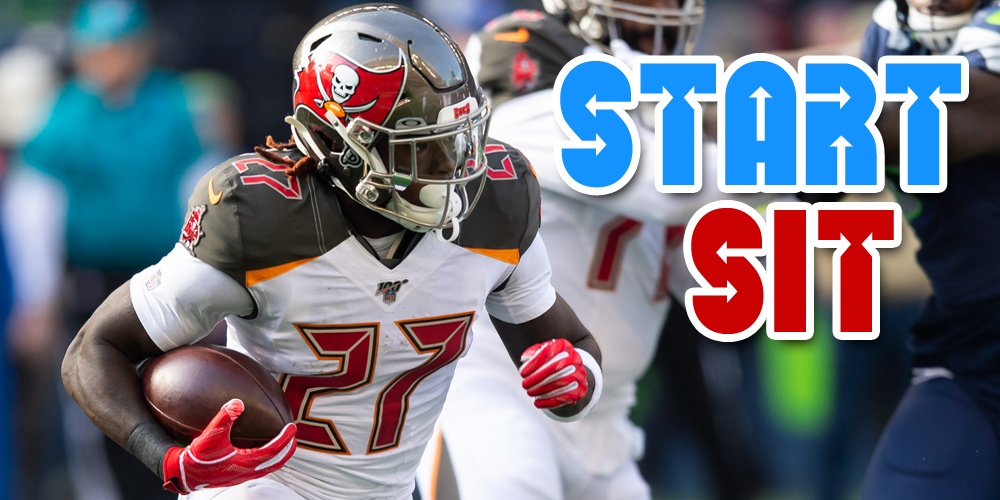 The 2020 NFL opening weekend had its fair share of big performances but overall it was a very 'on brand' opening slate for. There were certainly plenty of standout games last week but the duds seemed to outnumber the studs and made predicting the unpredictable opener way more difficult than we would normally be accustomed to with a full preseason.

The good news is now we have an official week of action in the books for all 32 teams so we have more data available and have to do far less educated guessing. Week 2 offers some scintillating matchups and plenty of opportunities for us to exploit as we look beyond the obvious and try to find low-owned start options.

Whether you won your opening matchup or had a rough week, it's time to prepare to win the next one. Here are some start and sit options to consider for Week 2.

Philip Rivers (QB) Indianapolis vs. Minnesota - The Colts dropped a disappointing 27-20 opening tilt in Jacksonville, but Indy's offense looked just fine in their first contest with Rivers under center. Rivers completed 36-of-46 passes for 363 yards and a score. Of course, he also tossed a pair of ugly interceptions but what makes Rivers a strong streaming candidate in Week 2 is a home tilt against a young Vikings secondary that just ceded 364 passing yards and 4 touchdown strikes to Aaron Rodgers.

Ronald Jones (RB) Tampa Bay vs. Carolina - Bruce Arians talked up Jones all summer then promptly went out and signed Leonard Fournette as soon as he was dumped by Jacksonville. This, of course, was a cause for concern for fantasy managers who drafted Jones, but there is reason for optimism after Week 1. Fournette got 6 touches on only 9 nine snaps (12.9%) while Jones received 19 touches on 33 snaps (47.1%). In time, Fournette is likely to become more of a factor as he gets acclimated to Tampa's system, but until that happens, Jones looks like a solid weekly RB2. This week, consider Jones an excellent option facing a Carolina defense that just allowed Josh Jacobs to rack up 139 total yards and three touchdowns last week.

J.K. Dobbins (RB) Baltimore at Houston - If Week 1 was an indicator, Mark Ingram's days as Baltimore's lead back are over. John Harbaugh gave Dobbins two goal-line looks, which resulted in a pair of touchdowns in his first NFL game. Overall, Dobbins out-snapped Ingram 23-21 but Ingram had a higher-touch rate. For now, we'll probably see close to a 50/50 split but both Ravens' backs will make fine Week 2 starts against a hapless Houston defense that just allowed Clyde Edwards-Helaire to rack up a league-best 138 rushing yards on Thursday. Dobbins and Ingram both make solid starts this week against Houston's struggling defense.

Marvin Jones (WR) Detroit at Green Bay - With Kenny Golladay out for Detroit's opener, Jones logged 91% of the Lions' snaps, ran a route on all his snaps, and reeled in 4-of-8 targets for 55 yards. If Golladay is out or limited, Jones should once again be in for a massive snap share in Green Bay and Jones has a strong history against the Packers. Jones has scored four touchdowns in his last four meetings with Green Bay. A lot of last week's damage against Green Bay's defense was in garbage time, but this should be a favorable matchup for Jones in a game that has the fourth-highest over/under on the Week 2 slate.

Marquise Brown (WR) Baltimore at Houston - Hollywood lived up to his billing in Week 1, nabbing 5-of-5 targets for 101 in just the first half of Baltimore's Week 1 thrashing of the Jets. With the game well out of hand, Brown only received one second-half target but averaged almost 17 yards per target. The Ravens have another enticing Week 2 matchup in Houston to face a dreadful Texans' secondary that allowed over 35 PPR points per game to wideouts in 2019 and was even worse than that in their opening loss in Kansas City. Look for the Ravens to establish a strong running game and take play-action shots downfield, which gives Brown massive upside in Week 2.

Allen Lazard (WR) Green Bay vs. Detroit - Locked in as Green Bay's No. 2 wideout, Lazard has an intriguing Week 2 home matchup against Detroit, which just allowed Chicago's wide receivers to catch 14 balls for 201 yards and 2 touchdowns. Lazard himself looked solid in Green Bay's dismantling of the Vikings, catching 4-of-4 targets for 63 yards and a score on an 87.2% snap rate- just two fewer than Davante Adams. Ideally, the Packers will be a run-first squad, but Aaron Rodgers will still take enough downfield shots to justify starting multiple Packers' pass-catchers in favorable matchups- like Week 2.

Logan Thomas (TE) Washington at Arizona - Thomas played nearly three-quarters of Washington's snaps and accounted for a surprising 15.4% of targets. Thomas also snagged a TD grab in Washington's surprising come-from-behind victory. Up next, he'll get a matchup with an Arizona defense that was by far the worst defense in the league against tight ends last season. His upside is limited by a subpar passing offense, but Thomas offers solid streaming value on a week-to-week basis.

Kirk Cousins (QB) Minnesota at Indianapolis - While Cousins posted usable fantasy stats in Week 1, he was mostly lousy before rallying the Vikings to 24 hollow points in the fourth quarter when the game was long lost. Cousins entered the fourth quarter with 7 completions and 95 passing yards and an interception before padding his stats after the Packers called off the dogs. It was a poor enough showing to make Cousins little more than a desperation QB2 against a Colts secondary that held the Jaguars to a mere 173 passing yards last week.

Chris Carson (RB) Seattle vs. New England - Like sitting Terry McLaurin, fantasy managers would have to have a strong roster to bench a strong RB2 like Carson, who housed a pair of touchdowns last week. Carson was limited to just 21 rushing yards on 6 totes in a solid matchup against the Falcons but could find himself limited once again in Week 2 as the Seahawks host a stout New England Patriots run defense. The Patriots held Miami's running backs to 69 yards (3.1 YPC) in Week 1 and were the league's top run D a year ago, surrendering just one rushing score in the entire regular season. Fortunately, Carson is proving that he can be an asset as a receiver out of the backfield, which should help his weekly value but expectations should be lowered for Week 2.

DeVante Parker (WR) Miami vs. Buffalo - Parker was forced to leave Miami's Week 1 loss in New England early when he re-injured his ailing hamstring. Even if Parker is somehow able to take the field this week against the Bills, he's unlikely to do much of anything against elite Bills' shutdown corner Tre'Davious White. While Parker had a solid showing against White last season, catching half of his 10 targets for 55 yards and a touchdown, he's unlikely to be anywhere near 100% and should be left out of lineups until he proves that he is fully recovered. That could take a few weeks of rest.

Terry McLaurin (WR) Washington at Arizona  - Suggesting that Terry McLaurin is a 'sit' isn't easy advice to give- it comes with what should be a caveat: you must have an adequate replacement. McLaurin did decently in Week 1, catching five passes for 61 yards in a tough assignment against Darius Slay. McLaurin has a rough stretch or coverage corners to open 2020, including Denzel Ward, Marlon Humphrey, Jalen Ramsey, and this week's pairing against Arizona's Patrick Peterson. Peterson is still one of the best shadow corners out there and is perfectly capable of limiting McLaurin's production. Only a truly deep fantasy squad could consider benching a stud wideout like Terry McLaurin, but lowering Week 2 expectations seems like a wise idea.

Darren Fells (TE) Houston vs. Baltimore - This week's Ravens/Texans tilt has the highest over/under for the entire slate, which seems like a solid game to instill Fells as a potential streaming option. After all, Fells scored 7 TDs last season, and Baltimore gave up a 6/70/1 line to Clevelands' tight ends in Week 1. But Fells only played 25 of Houston's Week 1 snaps and garnered 2 targets, while Jordan Akins logged 48 snaps and caught a touchdown. Akins is a better athlete than Fells, with more downfield ability and is likely to remain a more internal part of Houston's offense. Fells is little more than a TD-or-bust bye week fill-in.