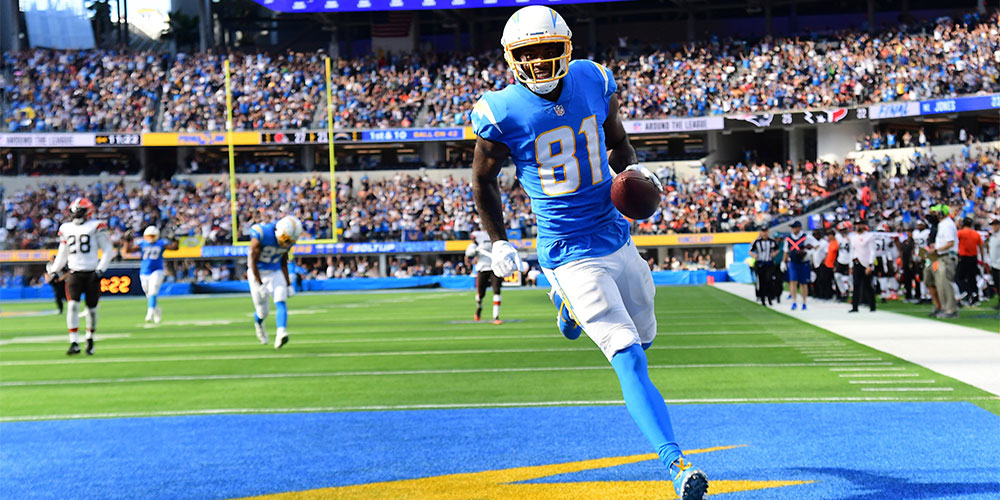 After what seemed like a light injury week in Week 4, the injuries kept piling up on Sunday after an impactful one to Russell Wilson on Thursday. Before the Sunday Night game, we had at least 11 fantasy-relevant injuries, not including the players already ruled out on Sunday. On a positive note, we experienced a ton of offense, drama, and fantasy production. After somewhat of a slower waiver wire last week, we have players to scoop up with so many injuries. Let's dive in with a loaded week of highlights, wonders, and disappointments.

With no Calvin Ridley and Russell Gage, the Falcons leaned on Kyle Pitts and Codarrelle Patterson. Pitts led the Falcons with 119 receiving yards as he hauled in nine out of ten passes for one touchdown. Although it's against a soft matchup like the Jets, it gives us more confidence in Pitts after the Week 6 bye week.

Based on Cordarrelle Patterson's production, it's looking like Alvin Kamara with 14 carries for 54 rushing yards plus seven of nine receptions for 60 receiving yards.

We'll note that Patterson's snap count almost equaled Mike Davis. Maybe it's related to no Calvin Ridley, or the Falcons realize the usage and opportunity for Patterson should increase. For weeks Patterson remained a sell-high candidate with his high efficiency. However, don't just trade him away for the sake of it since Patterson keeps producing like an RB1 and WR1, which isn't something I expected heading into 2021.

With Christian McCaffrey out again, Chuba Hubbard soaked up the opportunities. Hubbard finished with 24 carries and 101 rushing yards. He also caught five of six targets for 33 receiving yards. As long as McCaffrey misses time, Hubbard remains one of the top backup running backs, given the volume and usage. For any Royce Freeman truthers, Freeman garnered four opportunities for eight total yards.

After Myles Gaskin's lowest snap share (16.3%) and opportunities (two) in Week 4, Gaskin exploded in Week 5. Gaskin caught two touchdowns after hauling in all ten targets for 74 receiving yards. He led the Dolphins in receiving and also recorded five carries for 25 rushing yards. Let's see how the usage plays out in Week 6, but the Dolphins face the Buccaneers. After that, they face the Jaguars and Falcons, so Gaskin could end up as a sell-high candidate if folks don't believe in him. My heart says to hold onto Gaskin, but my mind says consider moving him via trade.

After mixed reports of Joe Mixon week-to-week and day-to-day, he played on Sunday. The Bengals listed Mixon as questionable after missing practice and logging a workout on Saturday. Although Mixon only rushed ten times for 33 rushing yards and one touchdown, Mixon showed no issues on that touchdown run.

Mixon for SIX. The @Bengals have tied it at 22!

Samaje Perine led the Bengals with 59 rushing yards on 11 carries. Perine also hauled in four of five targets for 24 receiving yards and one touchdown. We expect Mixon to take on most of the workload when fully healthy, but don't cut Perine since he's a valuable running back in this offense.

In a close game, the 49ers lost to the Cardinals 17-10. Trey Lance struggled in the passing game with 15-for-29, 192 passing yards, zero touchdowns, and one interception. Lance's 6.6 yards per attempt wasn't great, but he led the 49ers on the ground with 89 rushing yards and 16 carries. Just imagine as Lance improves, he'll provide potential QB1 performances due to the high floor and ceiling on the ground. Lance almost scored a rushing touchdown, yet the Cardinals stopped him at the goal line.

Is James Robinson an RB1?

After two down weeks, James Robinson finished as RB4 and RB8 the past two weeks. Robinson finished the game on Sunday with 18 carries for 149 rushing yards and one touchdown. He only hauled in one catch for negative two yards, but that's an RB1 type workload for Robinson. With the 9th highest opportunity share (72.5%) and 13th ranked Weighted Opportunities (56.1) heading into Week 5, Robinson should hover around a top-15 running back for the rest of the season.

Justin Herbert connected with Mike Williams for a 72-yard touchdown against the Browns on Sunday after a dud in Week 4 against the Raiders. Like Macklemore and Ryan Lewis - Mike Williams telling us the ceiling can't hold us. Willams reeled in eight out of 16 targets for 165 receiving yards and two touchdowns. That's a 37.2% target share for Williams compared to a 21% target share for Keenan Allen. Another week where Williams proved he's a WR1 with massive upside. Try and buy low on Allen too.

Williams had 13.7 yards of separation from the nearest defender (#43 John Johnson), the most open completion on a pass that traveled 50+ yards in the air over the last three seasons.

Davante Adams Crushing It Against the Bengals

Davante Adams crushed it against the Bengals with 16 targets (41% target share) for 11 receptions, 206 receiving yards, one touchdown. The Packers' offense continues to run through Adams and Aaron Jones. However, A.J. Dillon garnered some looks in the passing game by catching all four targets for 49 receiving yards and one touchdown. Aaron Rodgers targeted Jones five times, yet Jones caught four for six receiving yards.

With two weeks of data where Dillon ate into Jones' workload, it concerns us, and it's worth it to consider trading Jones away if you can land an RB1. If not, hold onto Jones since he possesses the week-winning type profile. With more touches for Dillon, he still trails behind with a 37.5% snap share in Week 4 and 32.8% in Week 5.

With no Sterling Shepard and Kenny Golladay leaving the game, rookie Kadarius Toney led the Giants' receivers. Toney balled out on Sunday and made play after play against the Cowboys. He showed the ability to create yards after the catch while making a couple of tough catches along the sideline. Although we don't have all the advanced data from Week 5, look at the target share for Toney for the past two weeks.

Unfortunately, Toney got ejected from Sunday's game because he threw a punch on an opposing player. He remains one of the top Week 6 waiver wire pickups of the week after Toney hauled in ten of 13 targets for 189 receiving yards. Hopefully, a suspension doesn't follow the ejection, which would impact the availability for next week.

With most of the buzz surrounding Damien Williams, Khalil Herbert also played well. Since the Bears played with a lead, Herbert garnered 18 carries compared to 16 for Williams. Herbert also bested Williams with 75 rushing yards compared to 64 for Williams, although Williams scored the rushing touchdown. Willams hauled in two of three targets for 20 receiving yards, while Herbert didn't earn a single target. Make sure to pick up Herbert if you haven't already with the involvement in Week 5.

With Saquon Barkley's ankle injury, add Devontae Booker, who finished with 16 carries for 42 rushing yards and one touchdown. Booker caught three of four passes for 16 receiving yards and an additional touchdown. Early reports indicate Barkley hopes to miss one week. Prioritize Booker over Herbert if you need someone for one week since Booker should receive most of the volume.

#Giants star RB Saquon Barkley is believed to have suffered a low-ankle sprain, sources say, an injury that likely knocks him out next week. He’ll have more tests, but he’s best characterized as week-to-week. A fast healer, Barkley will work to miss only one week.

A.J. Brown Disappoints Against the Jaguars

In one of the juiciest matchups of the week, A.J. Brown disappoints against the Jaguars. Although it's likely due to the game script as they dominated the Jaguars 37-19 with a 24-13 lead at halftime, Brown hauling in three of six for 38 yards isn't what fantasy managers expected. Attempt to buy low on Brown while you can because the blowup games will come soon.

For most of the game, Trevor Lawrence hadn't targeted Laviska Shenault. In a game with the Jaguars trailing early and often, Shenault hauled in a single 58-yard reception on three targets. Dan Arnold led the Jaguars in targets and receiving yards. However, the Jaguars should involve Shenault after losing D.J. Chark.

Laviska Shenault Jr. didn't see an increase in utilization with D.J. Chark out.

Made a big play late in the game, but another game where Shenault isn't garnering looks. At some point, we have to believe he's part of the issue?

Adam Thielen Did NOT Score a Touchdown

After scoring four touchdowns in three straight games, Adam Thielen didn't score a touchdown. Thielen caught two of three targets for 40 receiving yards, but Justin Jefferson led with seven catches on eight targets for 124 receiving yards. Admittedly, I faded Thielen given the touchdown efficiency, but Kirk Cousins proved he's one of the most efficient quarterbacks in the past seasons.

Should We Avoid the Jets Offense?

In what seemed like a smash spot, the Jets offense sputtered against the Falcons in London. Never again should I recommend Jets players as sleepers. Michael Carter and Ty Johnson scored rushing touchdowns, but Carter rushed ten times for 38 yards, and Johnson carried four times for 12 yards. The inconsistency for Corey Davis continued with only four catches on seven targets for 45 receiving yards. Jamison Crowder hauled in four receptions for 24 receiving yards on six targets. Although it's not what we expected for Davis and Crowder, they're still in that WR3 or WR4 range.

What do we do with Odell Beckham Jr., Allen Robinson, and Brandon Aiyuk? In a game where the Browns produced 531 yards on offense, Beckham caught two of three targets for 20 receiving yards. The Browns offense runs through the running game with Nick Chubb and Kareem Hunt. Through two games heading into Week 5, Beckham ranked 15th with a 26.7% target share and 4th with a 47% Air Yards Share. Hopefully, the 9.3% target share for Beckham in Week 5 remains the outlier. Although, we would hope for more production in a high-scoring affair. Attempt to buy low on Beckham and hope the fantasy production follows.

In a defensive-minded game, the Bears controlled the game with 139 rushing yards by Khalil Herbert and Damien Williams. Justin Fields only tossed 20 passes, with a handful going to Allen Robinson and Darnell Mooney. Both Mooney and Robinson lacked fantasy production, with 3-for-35 for Mooney and 4-for-32 for Robinson. Assuming the Bears continue to rely on their defense and the run game, that leaves little room for the pass-catchers. Although I still like Mooney and Robinson long-term, both seem even riskier than Beckham.

Unfortunately, we have yet another down game for Brandon Aiyuk. He caught half of his four targets for 32 receiving yards. Outside of Deebo Samuel with nine targets (31% target share), Trey Lance spread the ball around with Aiyuk tied for second with Kyle Juszczyk. Although, Aiyuk hasn't produced like many folks hoped, including me, with six, 37, and 15 receiving yards before Week 5. Attempt to buy low during the bye week, but value Aiyuk as a WR3 with upside.

Seattle Seahawks
Seahawks Defense Could Have Value In Week 12