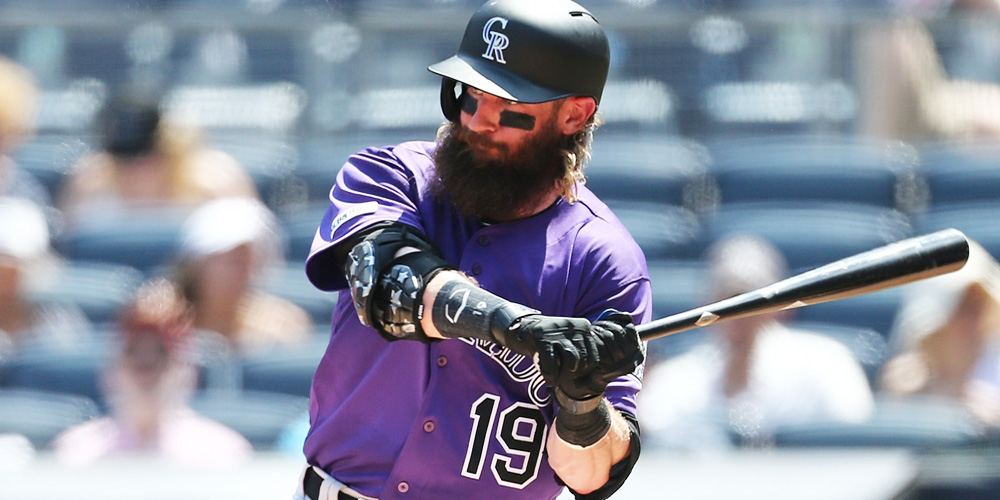 Rockies’ outfielder Charlie Blackmon comes into 2020 as one of the more polarizing players in fantasy drafts, as experts at Fantasy Pros have Blackmon being drafted anywhere from 11th overall to 54th overall, creating a lot of uncertainty around the 33-year old outfielder. This bodes the question; is he worth an early-round pick or is regression ready to rear it's head and put a damper on Blackmon's stock?

Looking back at his 2019 season, Blackmon operated as one of the better offensive outfielders in the MLB (league rankings in parenthesis):

Referencing above, he ranked in the top 15 amongst all position players in batting average, doubles, triples, runs, and OPS. Typically, this could answer the ADP question for you, but his case is much deeper than that.

As impressive as his overall numbers were, Blackmon was not quite the epitome of consistency. His batting averaged fluctuated rather drastically on a month-to-month basis, outlined below (per FanGraphs):

Seeing that his absolute worst month (July) was still one where he hit over 0.250 from the plate, his floor feels stable enough to tolerate when you look at the ceiling. He peaked in June, as he hit over 0.400 in 102 plate appearances (97 official at-bats). Over that span, he recorded 40 hits, with 45% of them going for extra bases (10 home runs, 7 doubles, 2 triples). He averaged over an RBI per game and posted video game-like numbers, netting fantasy owners a ton of production across the board.

As the recap of his June 2019 production alluded to, Blackmon experienced a bit of a power-surge in 2019. This could be written off on the surface as a blip on the radar given his age, with the assumption age-induced regression should come around, especially given the fact that Blackmon has been regarded as a contact hitter with speed upside for the majority of his career.

If you look beyond 2019, however, we see that Blackmon has adjusted his approach at the plate to cater to the fact that he won't have his fresh legs forever.

Stretching the data out over his 6 full seasons (500+ ABs in each) paint a vivid picture, as he's seen increases in both home run totals, isolated power, and hard-contact rate every year aside from a "down" season in 2018.

As he's progressed through his career, he's shifted from a player that's relied more upon stealing bases to score and log fantasy production, to one that is a threat to score every time he steps into the batter's box, making him a fixture atop the Rockies lineup on a daily basis.

These numbers could be contingent on the fact that Blackmon has the privilege of playing half of every season in Coors Field, which is widely regarded as the most hitter-friendly ballpark in all of baseball.

Since 2014, Coors Field has ranked #1 in Park Factor in runs every year outside of 2018, while ranking in the top-5 in Park Factor for home runs in each season, dropping out of the top-3 only twice.

With these rankings in mind, it's only logical that Blackmon posted a .379/.435/.739 triple-slash line while hitting 22 of his 32 home runs at home thanks to a 25.9% HR/FB ratio at home compared to 10.4% on the road. Taking it one step further, his 0.472 wOBA and 0.360 ISO at home are both higher than the overall league leaders in both categories (Christian Yelich and Mike Trout).

While Blackmon has elite rates at home, it’s also important to remember that he doesn’t play his entire season there.

His numbers away from Coors Field were far less productive, as he posted a triple-slash line of .256/.299/.432 with only 10 of his 32 home runs and a wOBA of 0.308. As stated previously, a floor performance of 0.256 is not something that should completely turn you away from drafting a player, but it's important to keep in mind the fact that he won't be producing Mike Trout level production throughout the entire season.

The concern surrounding the potential downside on the road seems to be one of, if not the main driving factor for fantasy owners when considering where to draft Blackmon. While this is obviously something to keep in mind, the drastically contrasting slash lines come with the territory when you're drafting players from the Rockies.

Given the fact that he does play half of his games in the most favorable ballpark in the league, this should be viewed as a reason to draft him, not a reason to slight the rest of his performance and avoid him on draft day.

On top of that, he's locked into an everyday leadoff role, has improved his power numbers year-in and year-out, and is fresh off of a season in which he ranked top-15 in the MLB in most of the major offensive categories. Letting a player with this resume slip past the 3rd round of a standard draft would be a draft-day mistake. Draft him in the 2nd or 3rd round with confidence.