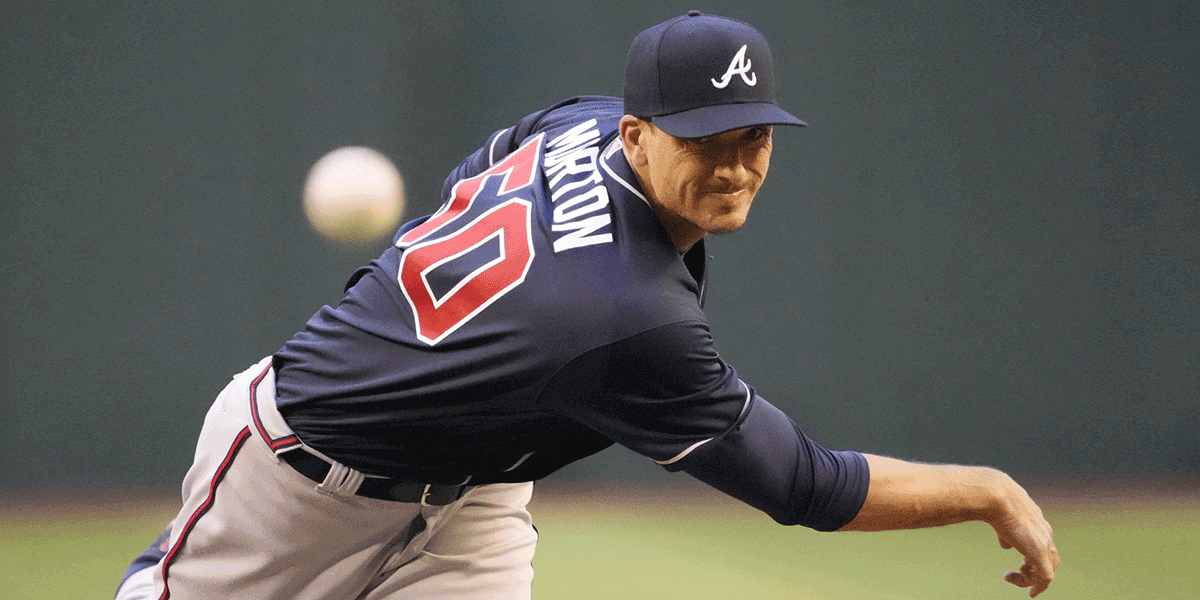 As we near the halfway point of the fantasy baseball season, we've gathered enough data to identify trends and reasons for optimism or concern. Check out last week's hot and cold players as we continue to evaluate the strengths and weaknesses of our rosters. Should we hold, cut, or trade certain players? Can we learn from draft or waiver wire mistakes in the final months? All questions usually depend on the league or roster context. 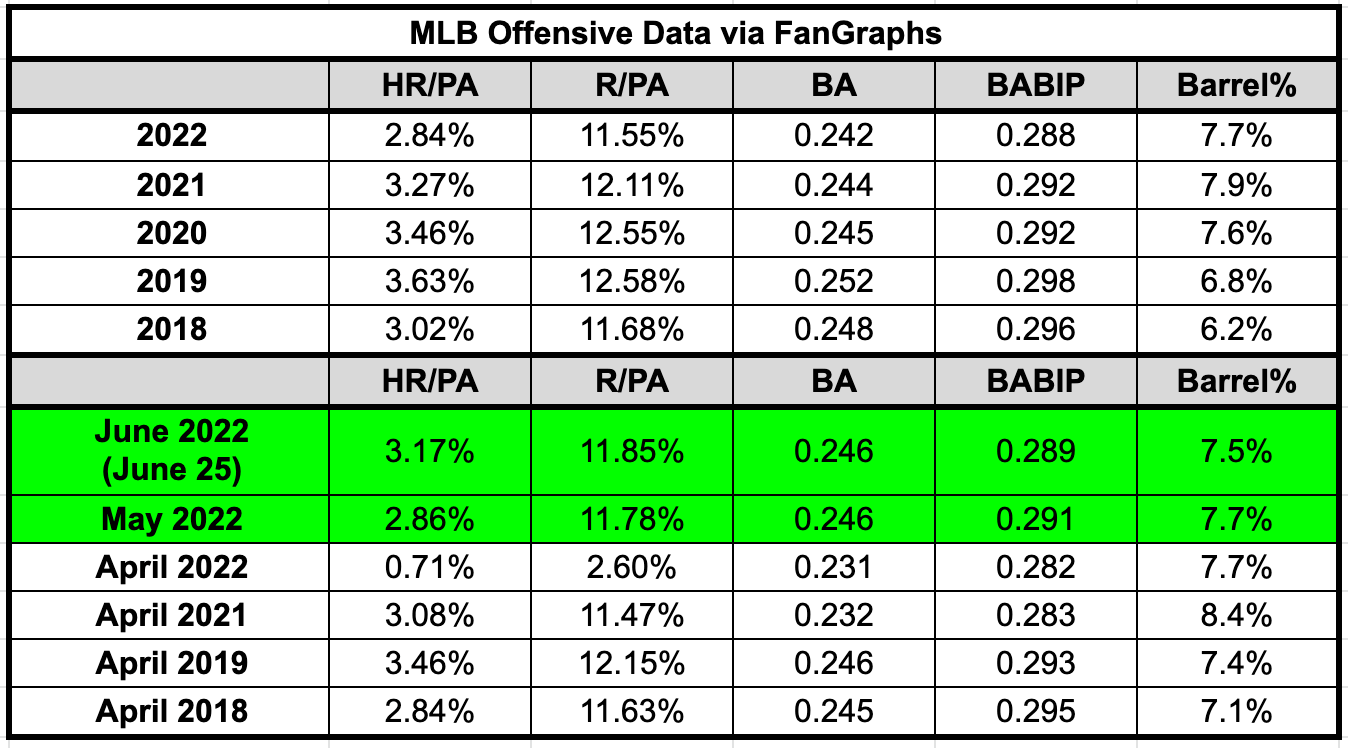 The league-wide offense continues to remain up from April and May as expected. It should be easier to stream hitters yet riskier to stream pitchers. Since the pitchers on the waiver wire might have more risk, be cautious in the roster moves and lineup setting throughout the summer. As usual, we'll look at four hot and cold players, with one pitcher and hitter under each section. What do the underlying metrics indicate? Can these players sustain the hot surge? Or should we expect a bounceback for these cold players? 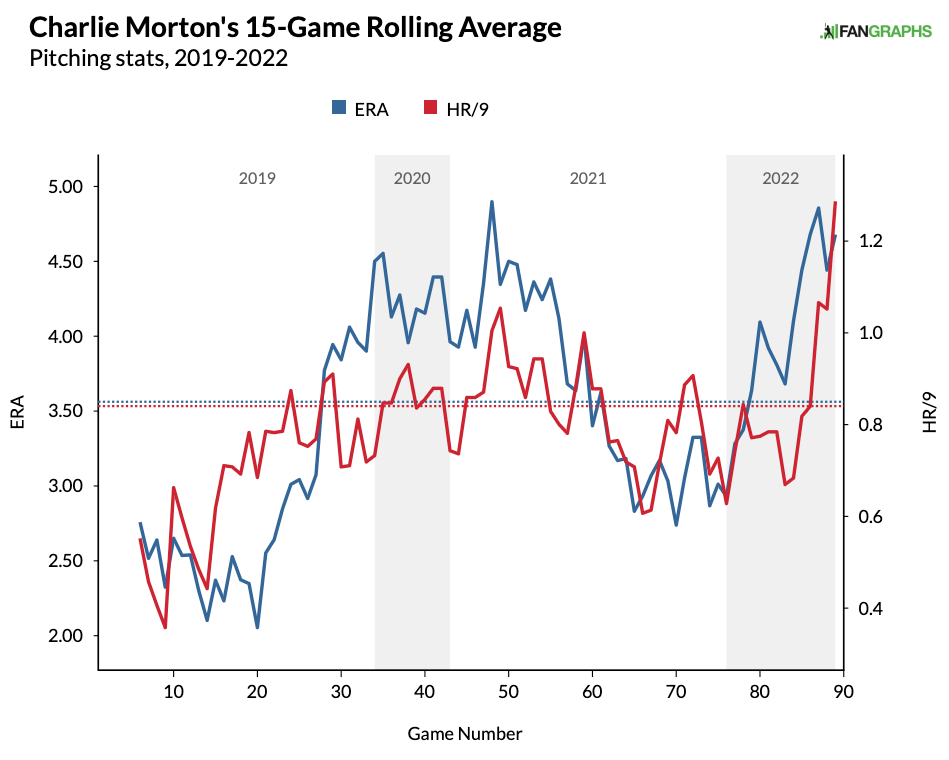 The increase in home run rates relates to the drop in groundballs. Morton has a 38.7% GB% in 2022 versus a career GB% at 52%. Several pitches in the four-seamer, curveball, slider, and offspeed have generated fewer groundballs. 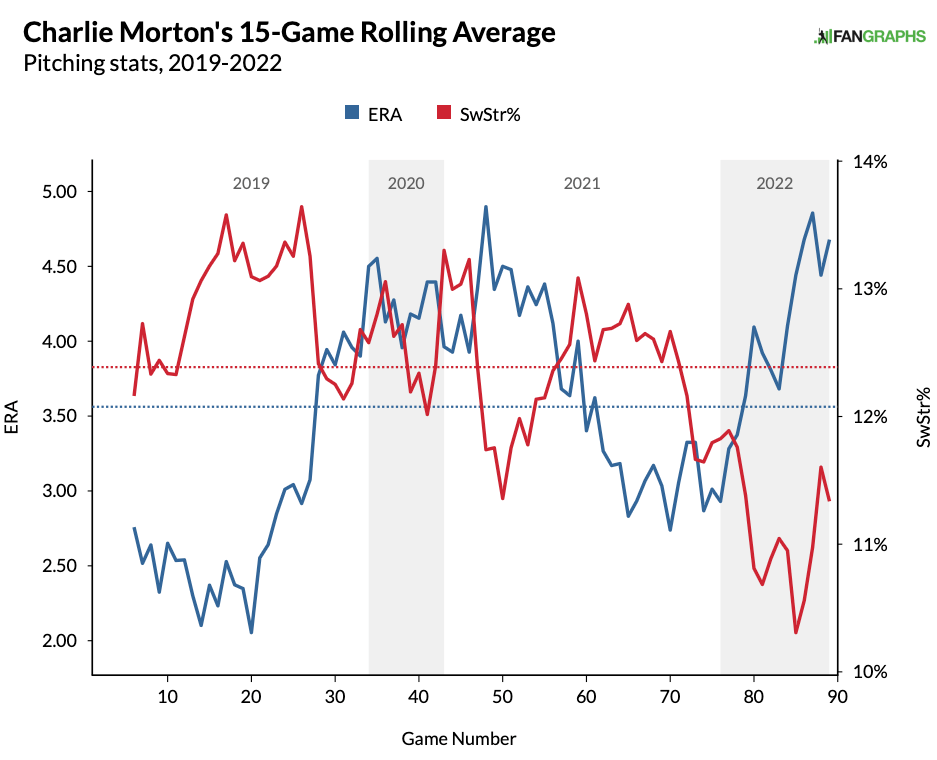 Morton's 16% SwStr% increased in June versus an 11.3% SwStr% in 2022. Although Morton faced the Cubs and Pirates for two of the four starts, he pitched against the Giants and went on the road versus the Rockies. There hasn't been a pitch mix change in June, so it's probably Morton's skills regressing positively. 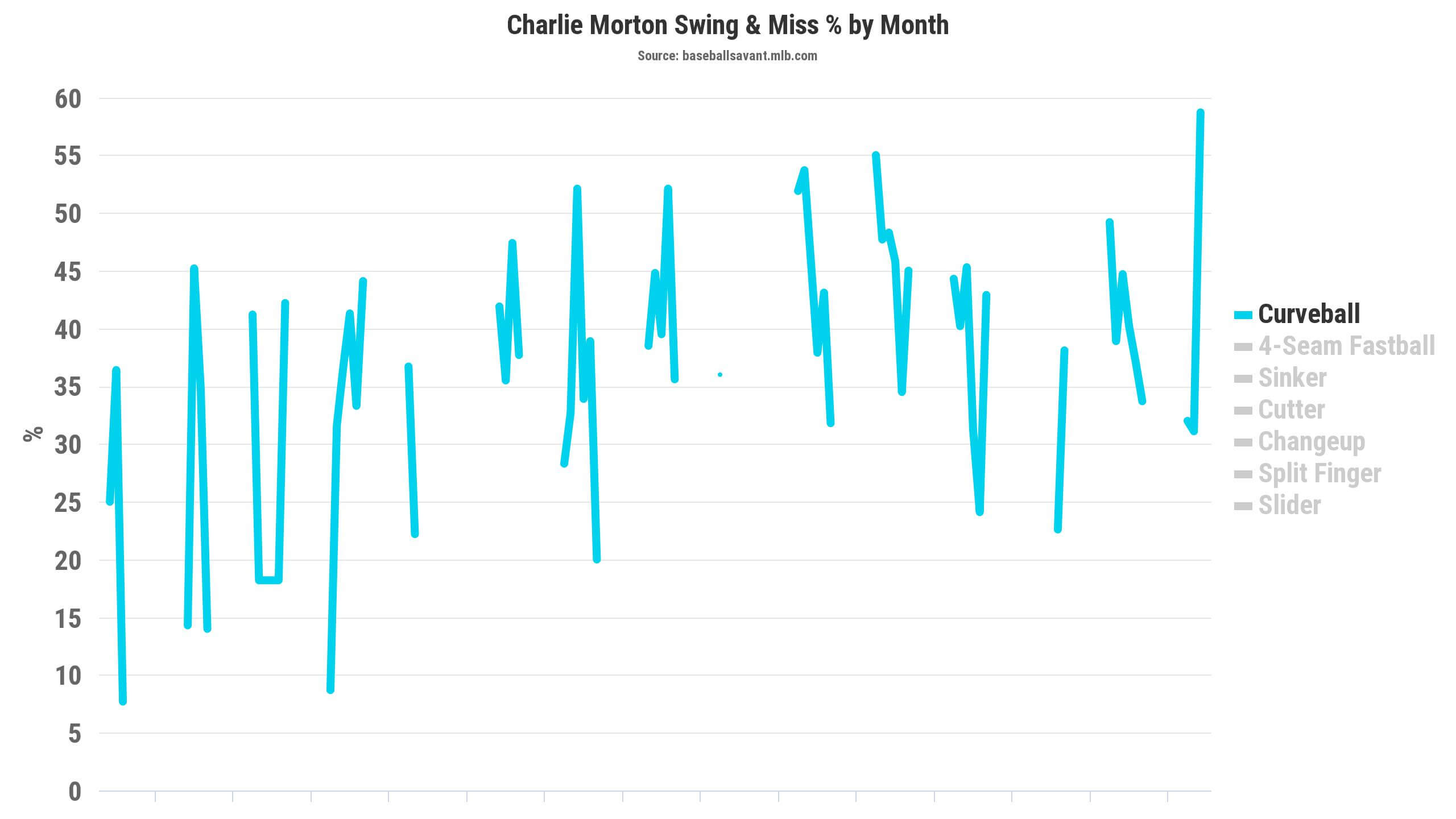 Meanwhile, Morton's Whiff% on the curveball has improved throughout the 2022 season. He had a 32% Whiff% in April, 31.1% Whiff% in May, and a 58.7% Whiff% in June. Unsurprisingly, Morton's results on the four-seamer and changeup improved via the Whiff% too.

It's natural to expect regression with Morton's productive seasons from 2017-2021, not including the shortened 2020 season. If Morton's GB% improves, aligning with a drop in home run rates, it should help the ratios. In the small sample of June, that trend happened for Morton, with the K-BB% and SwStr% looking juicy. Buy low on Morton, though it depends on the cost. With an NFBC ADP around pick 100, look for a hitter or pitcher in the 100-150 range to identify a potential swap. A few trade options for Morton include Ryan McMahon, Clayton Kershaw, and Joey Votto.

Towards the end of June, would you have guessed that Jack Suwinski tied for the most home runs for the Pirates with Bryan Reynolds? Probably not. In Suwinski's MLB debut season, he has 12 home runs, 26 runs, 22 RBI, and two stolen bases with a .214 BA. A three-home run game in June boosted the month's home run total to seven. 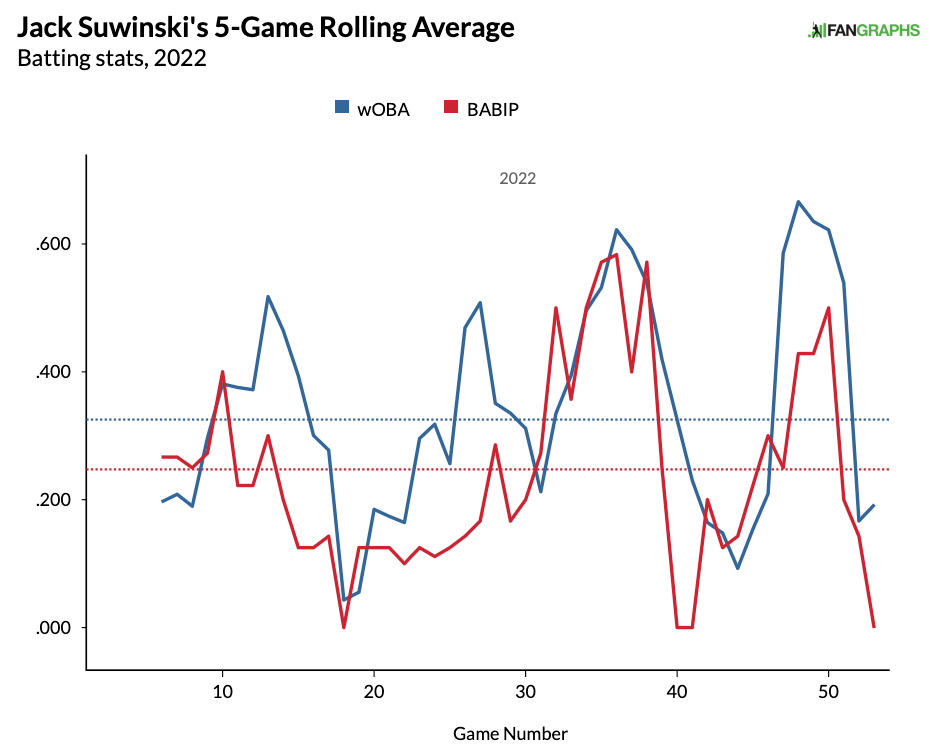 Home runs aside, Suwinski's BABIP has boosted the June production as a recent hot hitter. Suwinski rocks a .324 BABIP in June versus a season-long BABIP of .247. It seems unlikely to sustain the high BABIP with a 17.1% LD% and 41.5% GB% in June, meaning he's likely been lucky. Or the 41.2% HR/FB% probably helps too. Although Suwinski's 39.4% hard-hit rate doesn't pop, he barrels up the ball so far. 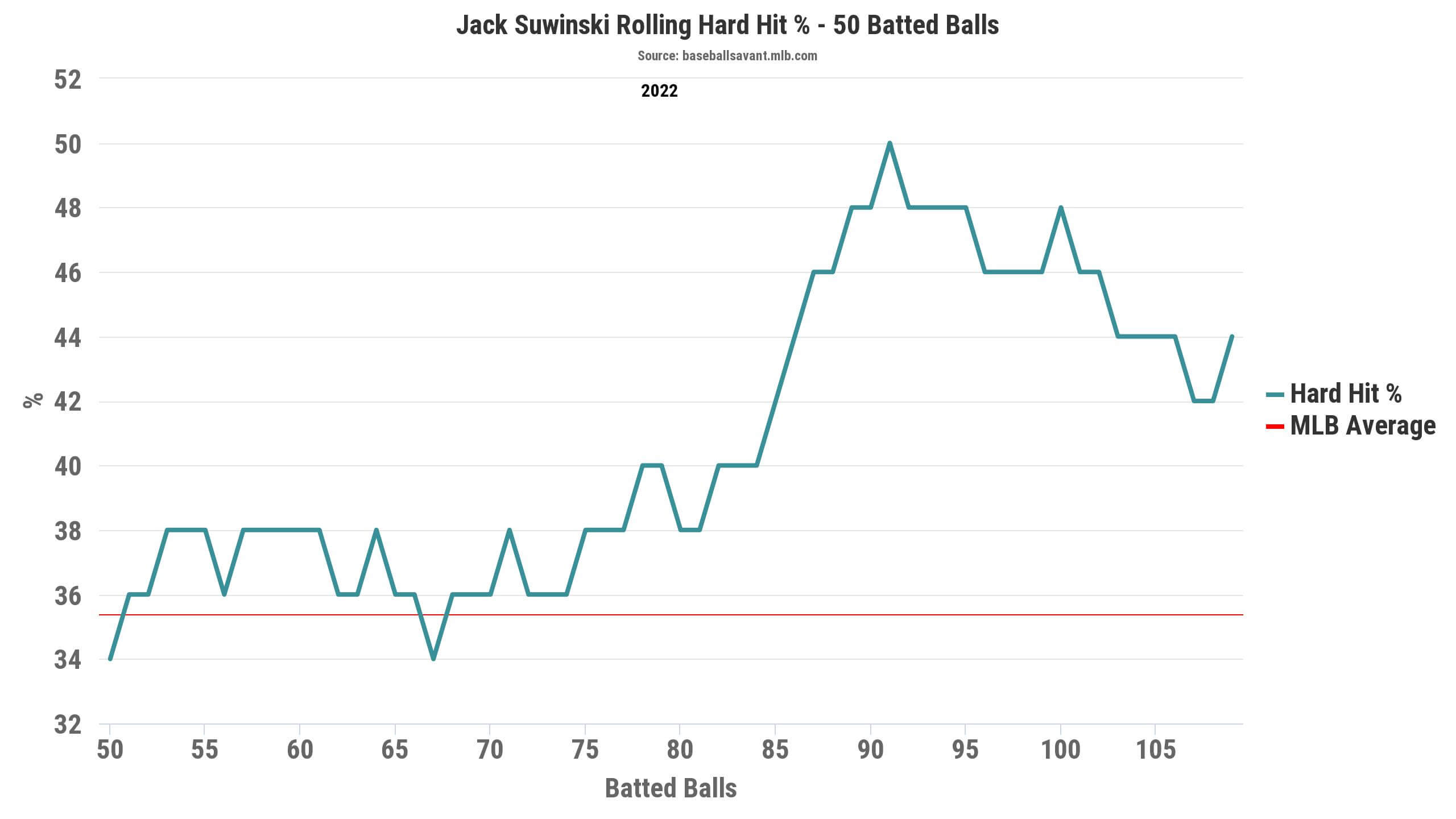 Unsurprisingly, Suwinski's 14.6% Barrel% in June remains above the season-long Barrel% at 13.8%. It's a small sample, but Suwinski doesn't hit well against any particular pitch with peak numbers versus breaking pitches with a .226 BA, .500 SLG, and .342 wOBA.

Suwinski's 31.7% strikeout rate and low batting average haven't aligned with his plate discipline metrics. The 28.3% O-Swing% remains lower than the league averages, with contact rates near the league norms. Often, we'll find hitters with high strikeout rates and low batting average, translating into poor plate discipline. However, it should translate into a better OBP, meaning the .290 OBP should regress closer to the minor league numbers. At Double-A in 2021 and 2022 with the Pirates and Padres affiliates, Suwinski posted a .387 OBP.

The lineup spot remains another positive note for Suwinski as he typically bats in the middle of the Pirates order. For the rest of the season, THE BAT X projections have Suwinski for nine home runs, 28 runs, 29 RBI, and two stolen bases with a .226 BA. Unfortunately, the Pirates rank 25th with an 85 wRC+ in 2022, so it's still one of the worst offenses in the league. The Barrel% and plate discipline remain the two most positive skills, though he'll probably hurt in other categories.

The veteran southpaw, with a massive six-year, $140 million contract back in 2019, landed as a deep league starting pitcher sleeper candidate. In that article, I examined how Patrick Corbin could regress and bounce back in 2022. Unfortunately, Corbin's 6.60 ERA and 1.79 WHIP remain career-worsts in 2022. Corbin's ERA estimators in the FIP look concerning as it's trending downwards. 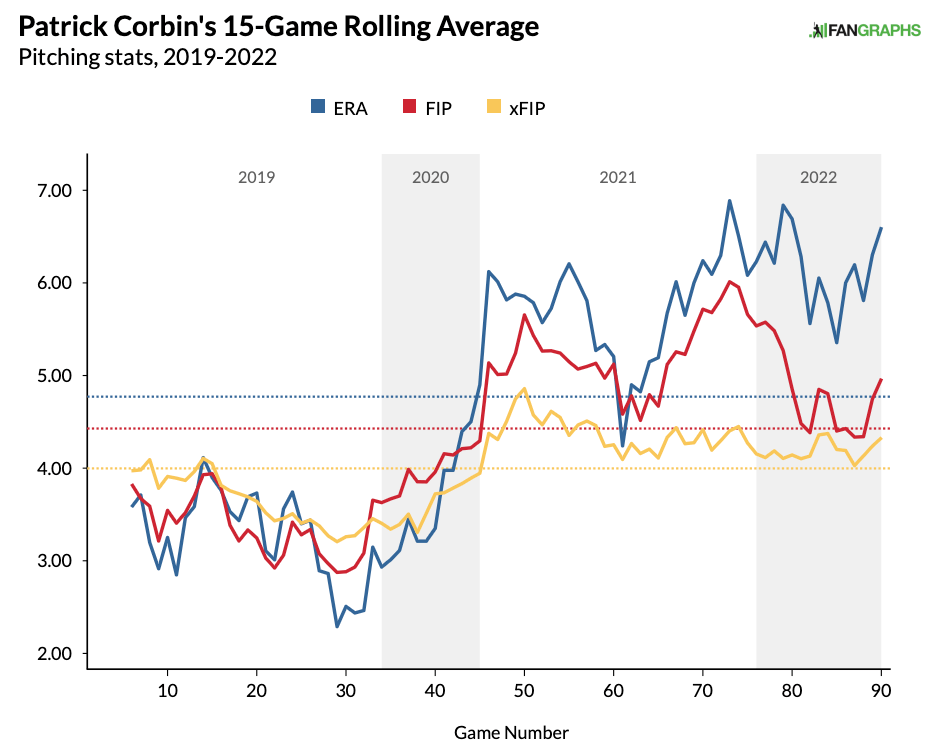 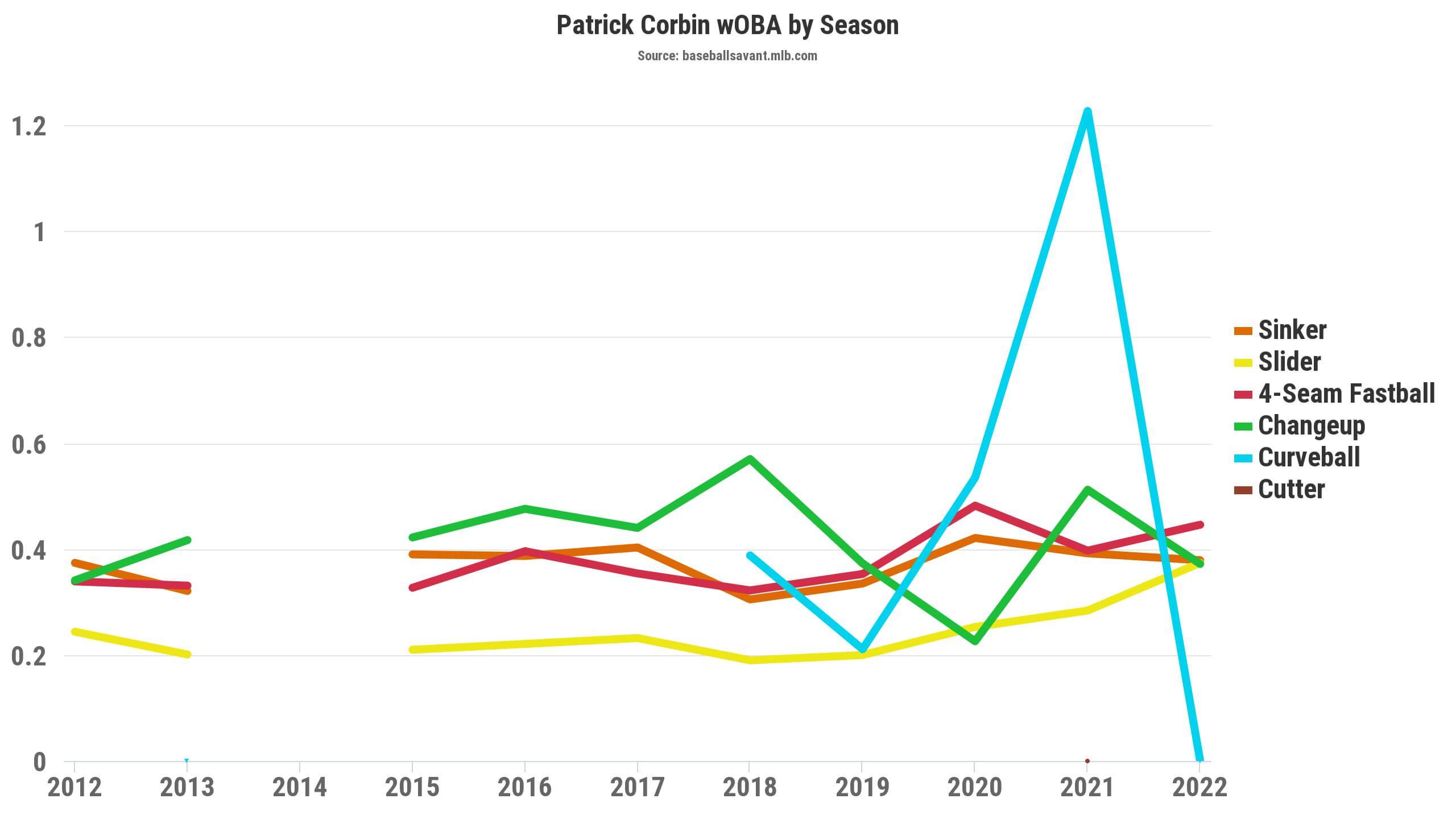 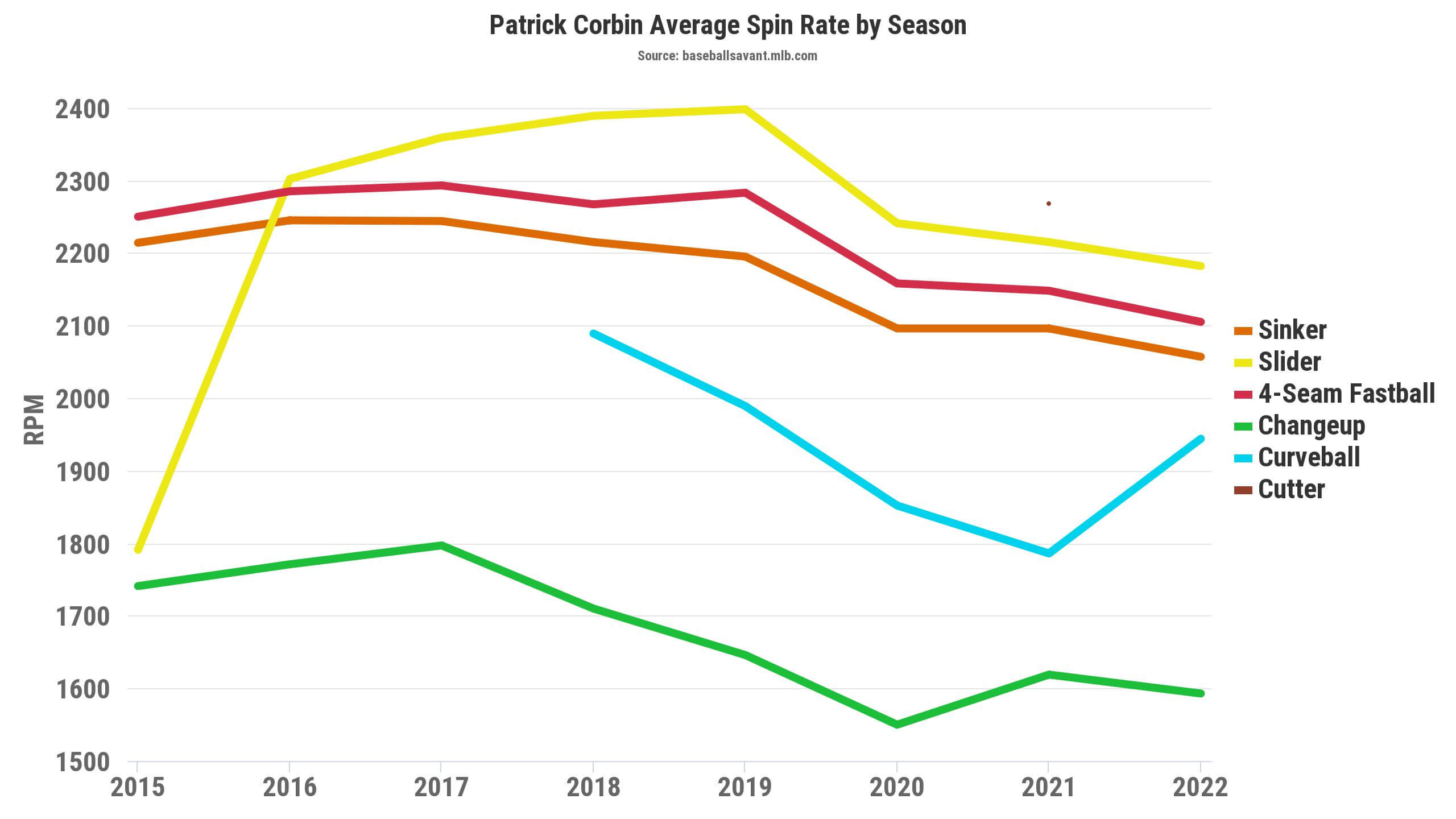 Corbin's slider gradually dropped in spin rate, translating into a slightly different movement. It's not just on the slider, but other pitches decreased too. The slider's vertical movement dropped to 40.1 inches in 2022 from 41.6 inches in 2021 and 42 inches in 2019. 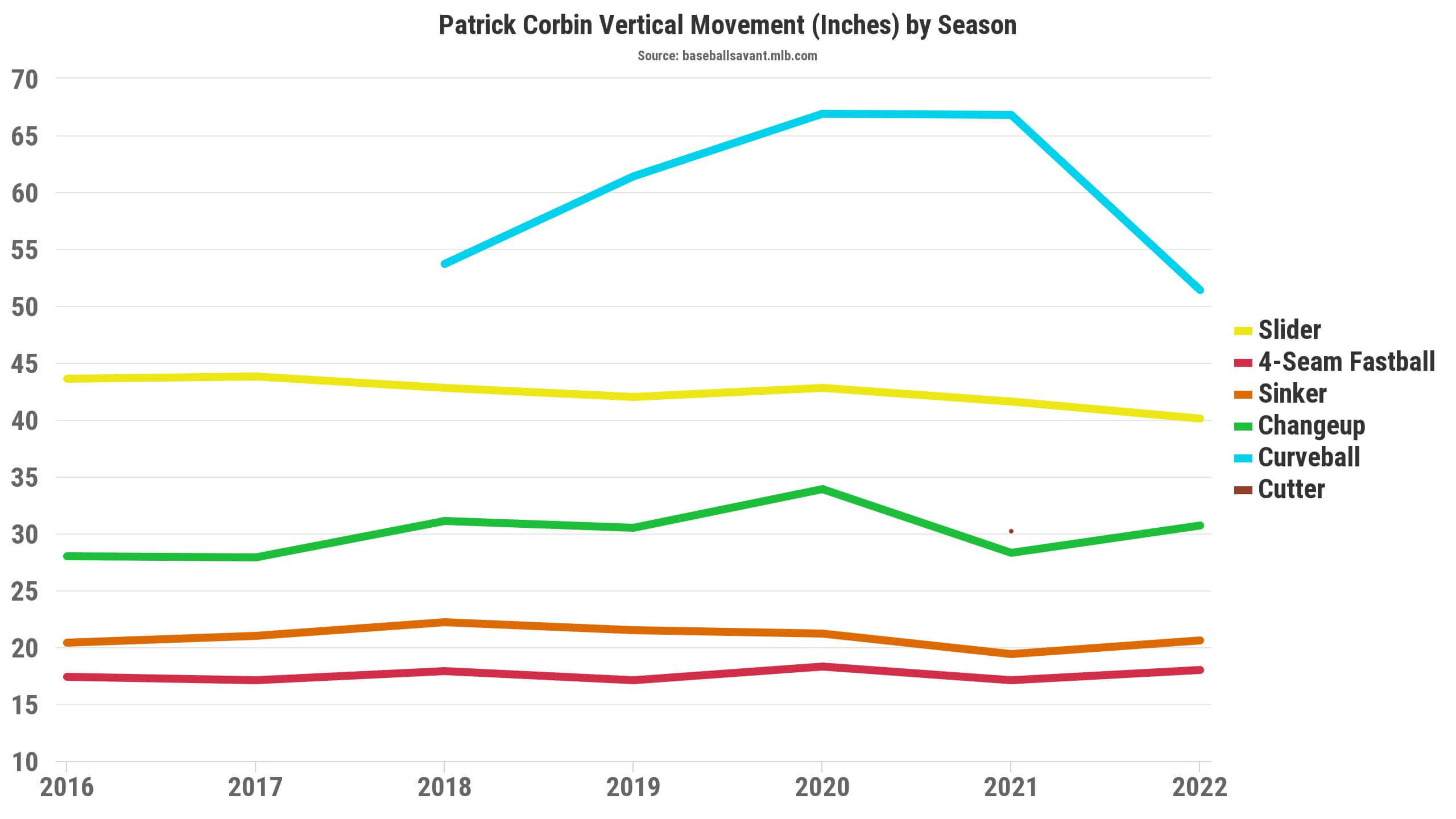 From 2016 to 2019, Corbin's slider possessed an above-average vertical drop, translating into better whiff rates. However, only the four-seamer has above-average movement with 8.1 inches of arm-side fade.

Although we don't have any buy or sell recommendations, sometimes it's a good exercise to identify what's wrong with a player. Unfortunately, we find several concerning metrics pointing to a lack of optimism. Corbin's slider hasn't been as effective in SwStr% and batted ball results. The underlying metrics scream stay away, even in friendly two-start weeks, since it doesn't seem he'll bounce back in 2022.

After dealing with an injured quad to begin the 2022 season, Luis Urías has underperformed in 2022. He has six home runs, 23 runs, 18 RBI, and one stolen base with a .216 batting average. For a brief stretch, the Brewers moved him into the two-hole for 17 straight games, which aligned with the timeframe when shortstop Willy Adames spent on the injured list.

To begin the 2022 season, Urías had a hit in 14 out of the first 17 games until May 23, but that hasn't translated into quality fantasy production. Although he never had a high BABIP in 2021 (.280), the .254 BABIP isn't doing the BA any favors. Urías leans heavily into the groundballs and flyballs, hovering around 40%. It seems like an attempt to tap into some pull-side power. 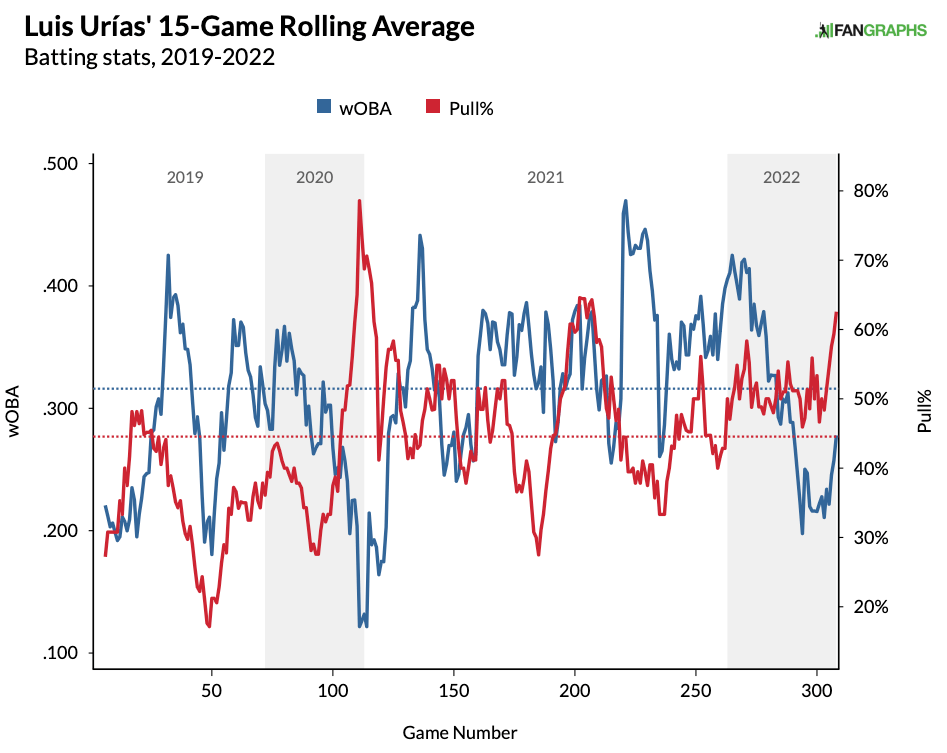 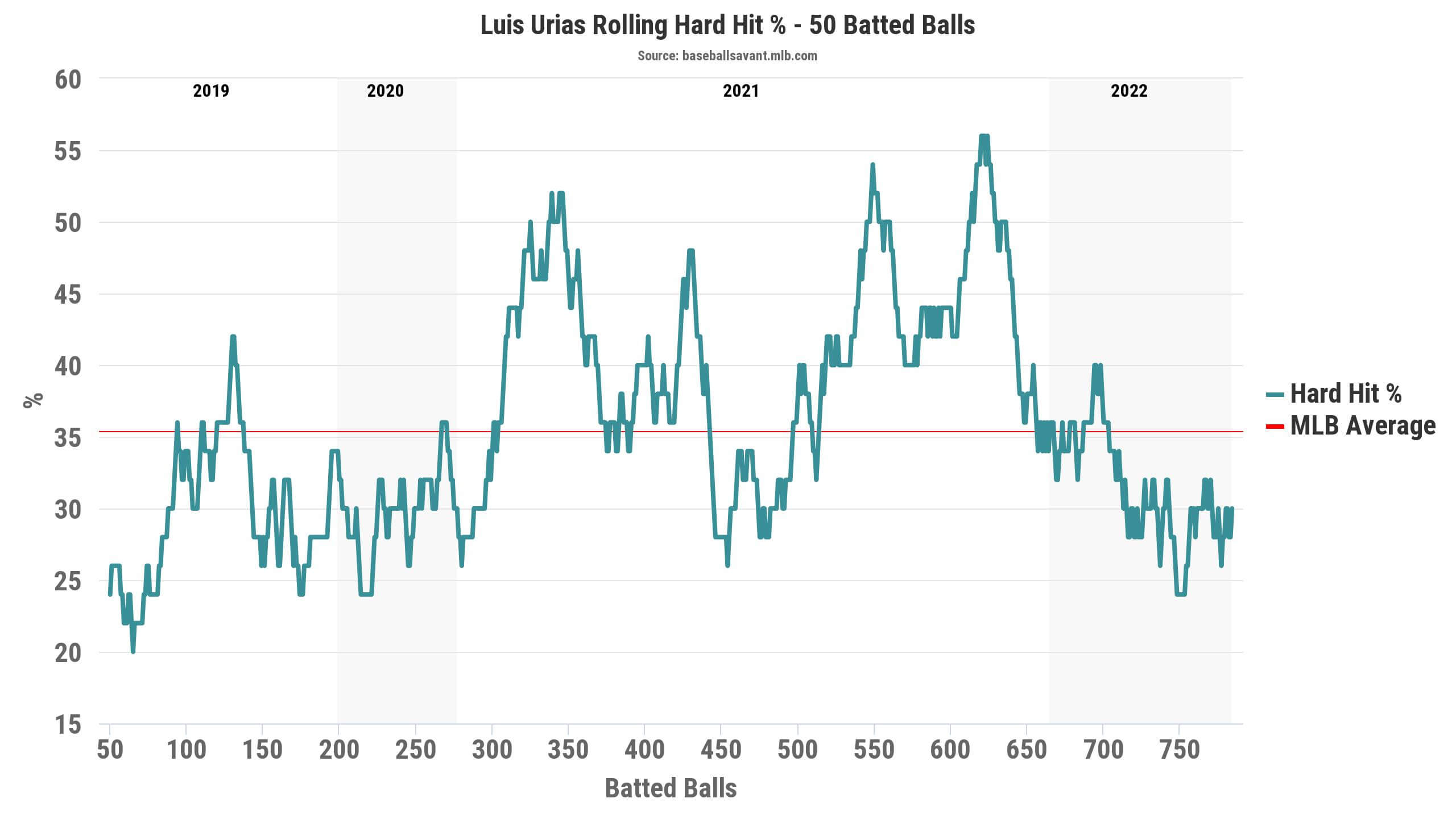 On June 4, Urías missed a couple of games due to a thumb injury, so there's a chance that has negatively impacted the power skills. Even the quad injury to begin the season possibly affected his lower body as a base power source. 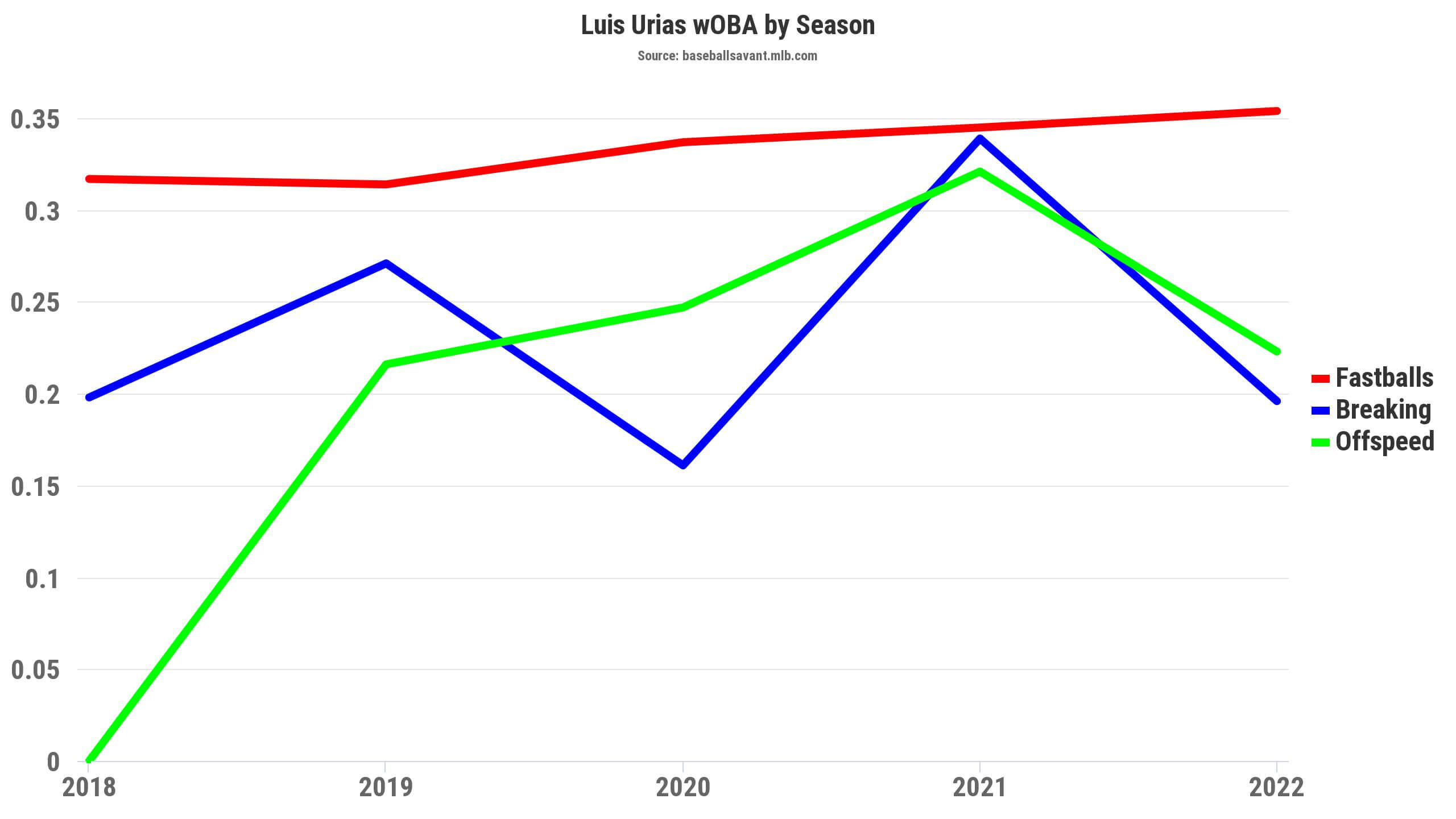 It's hard to quantify, but a question that swirls in my mind relates to how much positional flexibility matters with a player like Urías. If Urías finishes with the projected numbers via THE BAT X - is it worth his draft cost? The projections expect ten home runs, 38 runs, 35 RBI, and three stolen bases with a .241 batting average, which would translate to 16 home runs, 60 runs, 52 RBI, and four stolen bases. Currently, Urías has a $-8 Earned Auction Value. Unfortunately, Urías' skills and production in 2022 would align more with a hitter streamer like Wilmer Flores (2021). Unless we observe some skill gains over the summer, Urías has limited upside in 2022.