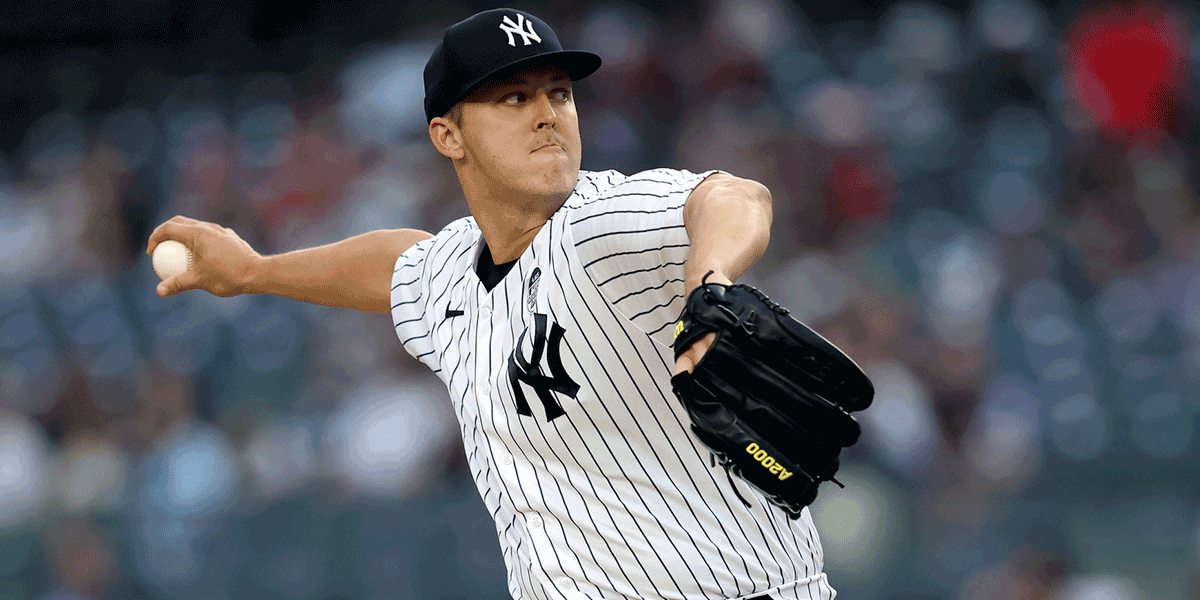 In this week's installment of our fantasy baseball hot and cold players, we sort the leaderboards to undercover what's going on under the hood. We analyze one hitter and one pitcher in each section to see if the hot players have sustainable skills or if it's a small productive sample. The same goes with the cold players - can they bounce back in 2022?

Over the past couple of weeks, Gio Urshela heated up, evidenced by a pair of home runs with a .360 batting average. It's interesting because I think of Urshela as providing value via defense, yet he has a -2.6 Def WAR and an Outs Above Average in the 3rd-percentile. Urshela's .410 BABIP boosted his production over the past two weeks. 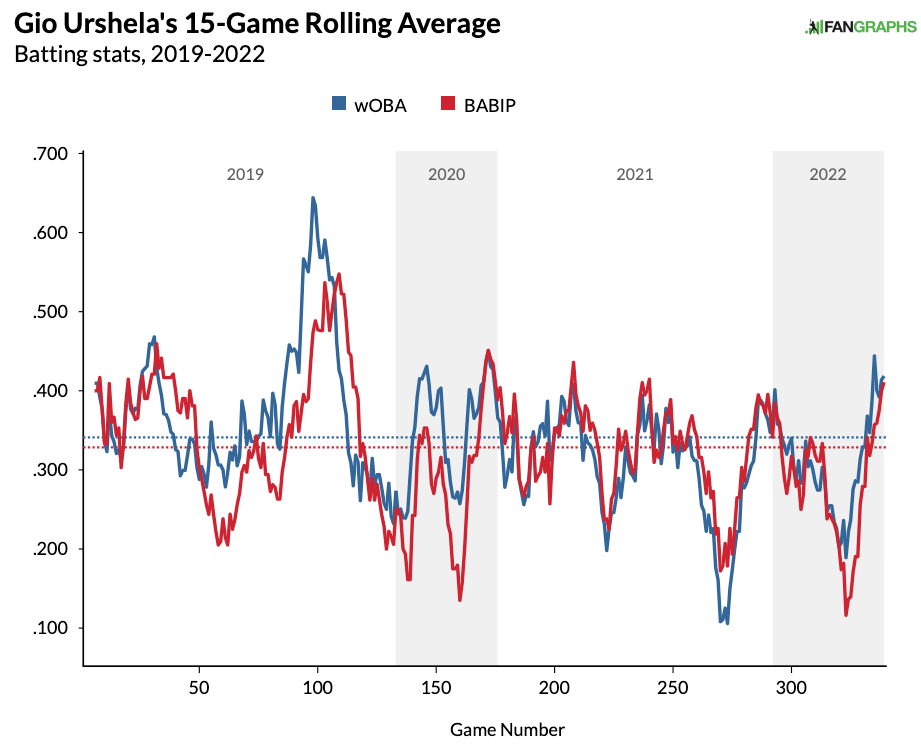 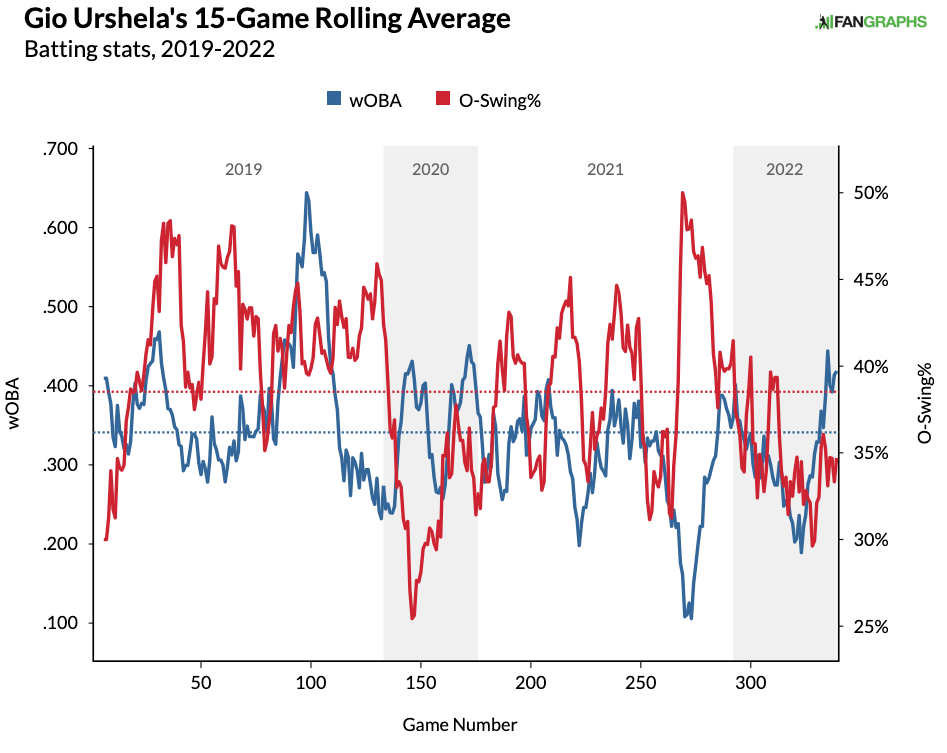 Interestingly, Urshela has a near-career best 8.9% walk rate, with a career-low 8.1% SwStr%. Urshela typically boasts an O-Swing% near the league averages with contact rates above the league rates.

Unfortunately, Urshela's contact quality metrics don't pop off the page, as evidenced by the 7.3% Barrel% (44th-percentile) and 5.6% Barrel/PA. Even Urshela's 37.2% hard-hit rate (33rd-percentile) and 110.3 mph maximum exit velocity (70th-percentile) remain underwhelming. Although exit velocities aren't a massive part of Urshela's profile, he provides value via accumulation without a standout tool.

The BABIP boosted the fantasy production for Urshela over the past couple of weeks.  During the past two weeks, Urshela's batted ball profile remained similar, with the LD% around 19-20%, plus a 7.3% Barrel% and 39% hard-hit rate. Value Urshela as a streaming hitter in shallow leagues and possibly a corner infielder in 15-teamers. Overall, Urshela's profile doesn't excite fantasy managers. 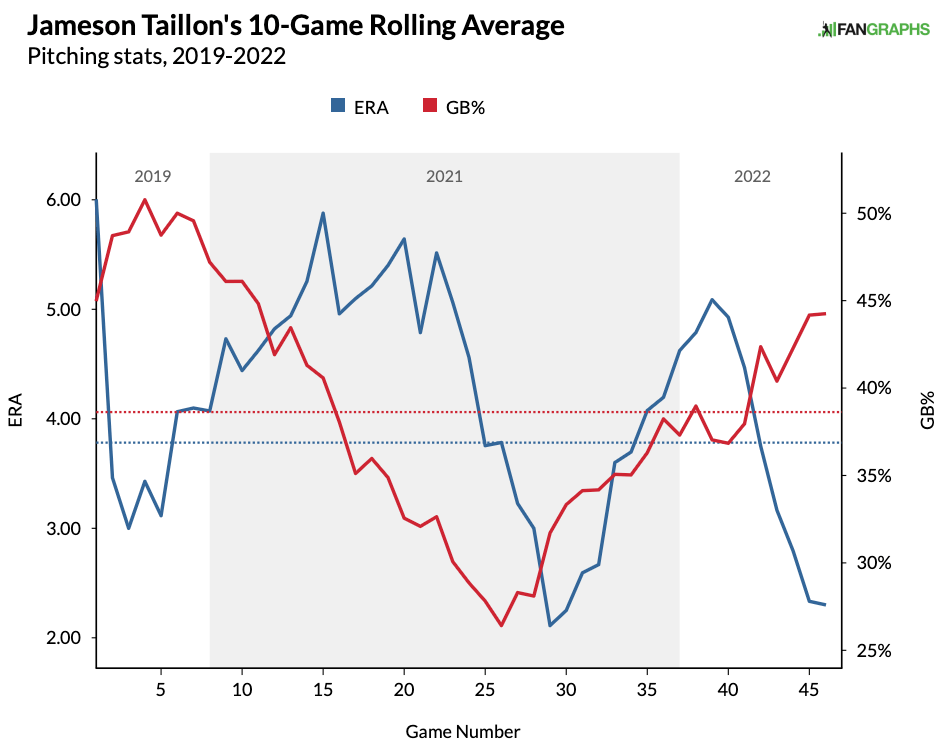 Taillon generated a GB% north of 53% on two or more pitches throughout his career. However, that changed in 2021, translating into a drop in overall GB%. In 2022, Taillon has four pitches with a GB% around 50% or higher in the curveball, cutter, sinker, and changeup. Meanwhile, the sinker generated a season-best 48.4% GB% in 2021. Overall, Taillon is adjusting back to what worked previously in his career. 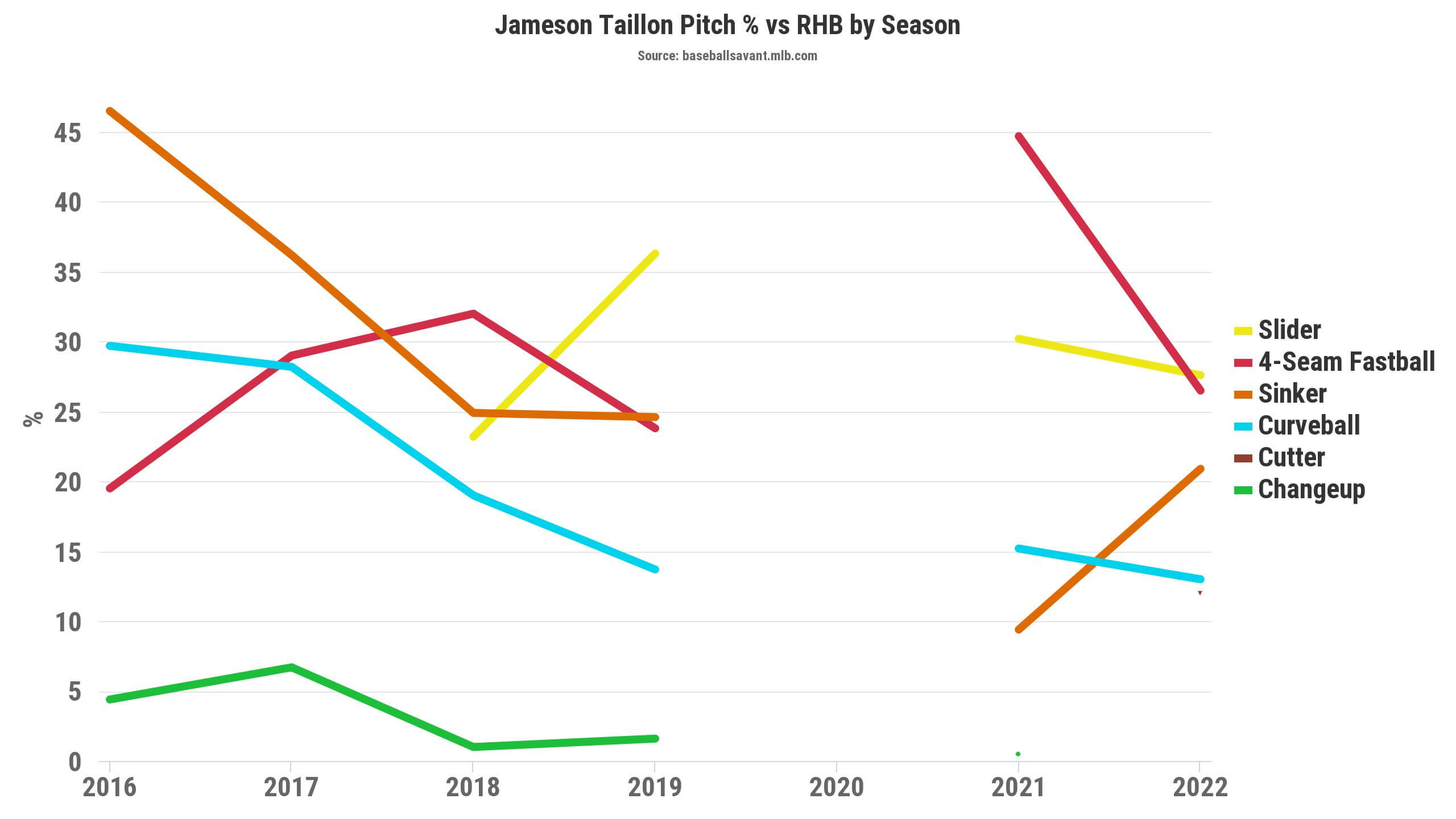 Against righties, Taillon lowered the four-seamer yet increased the sinker usage. Taillon uses the sinker low and inside to right-handed hitters, translating into weak contact with a .219 BA, .250 SLG, and .236 wOBA. Increased sinker usage isn't always a bad idea if using it effectively. 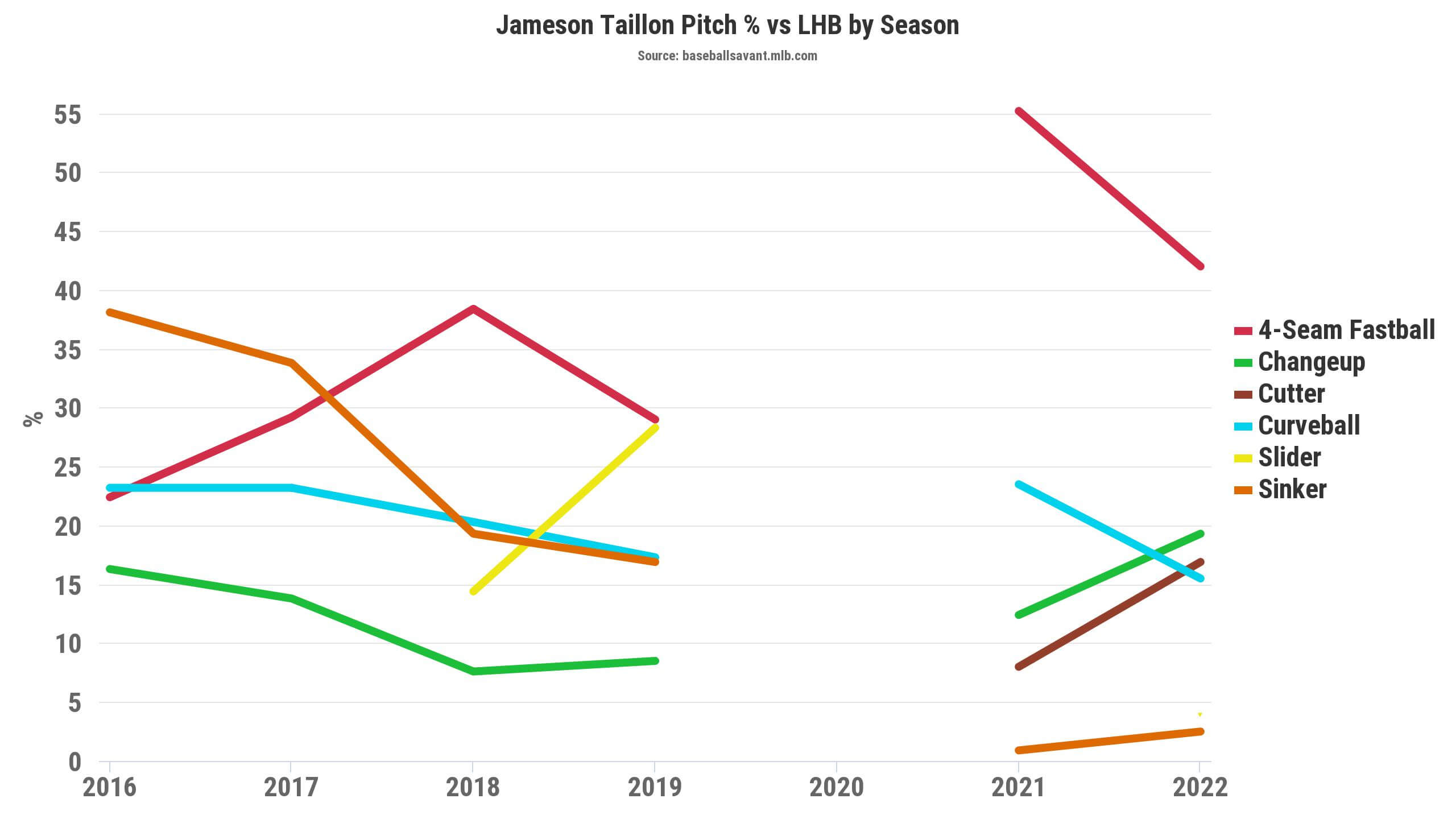 Meanwhile, against lefties, Taillon increased the changeup and cutter usage by seven to eight percentage points to keep opposite-handed hitters off balance. Taillon's changeup hasn't allowed a single hit, with the cutter resulting in quality numbers, evidenced by a .222 BA, .333 SLG, and .241 wOBA.

The underlying metrics point to Taillon making intentional changes turning into positive results. Throughout Taillon's career, he limits the walks with a 6% walk rate and a quality 1.21 WHIP. In trading leagues, attempt to buy high as an SP3 or SP4 in 15-teamers. Or ride the wave because the skill indicators point towards sustained success to help with ratios, quality starts, and wins.

One player that tempts me each season involves Germán Márquez. The skills exist, but the team context and home ballpark don't help Márquez. Unfortunately, Márquez's ratios look brutal, with a 6.71 ERA and 1.62 WHIP. Typically, the BABIP and LOB% probably align with the poor ratios. In 2022, Márquez has a .343 BABIP and 57.6% LOB% versus a career BABIP of .310 and LOB% of 70.1%. 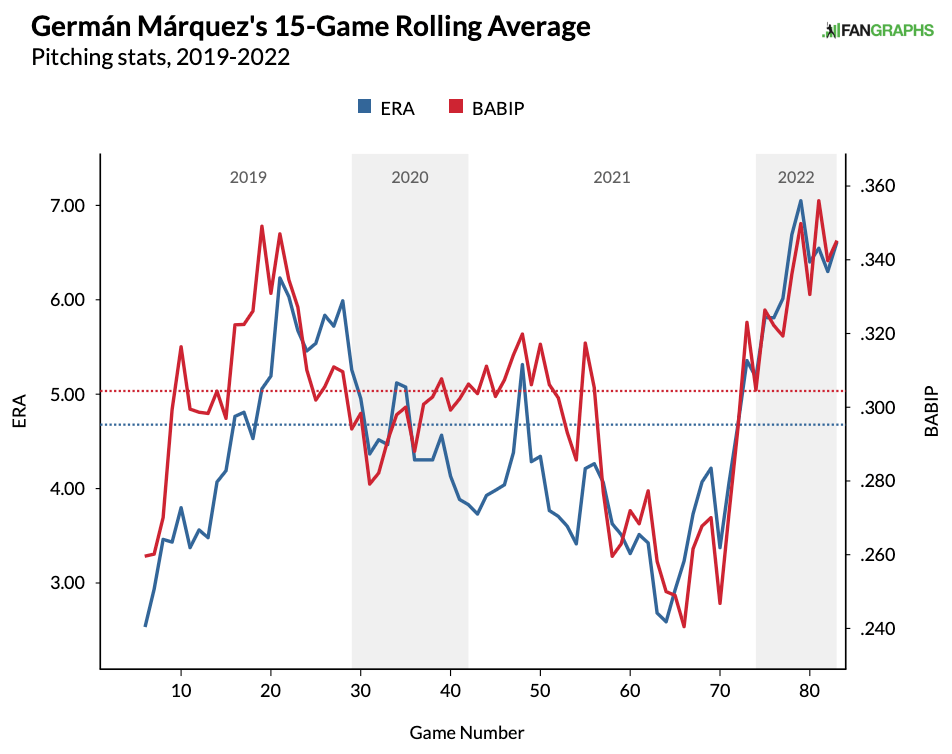 Unfortunately, Márquez's 18.3% strikeout rate dropped to a near career-worst since his rookie season, with the walk rate remaining similar to the career norms at 7.2%. The 9.7% SwStr% dropped from 12% or higher over the past four seasons, aligning with the lowered strikeout rate. 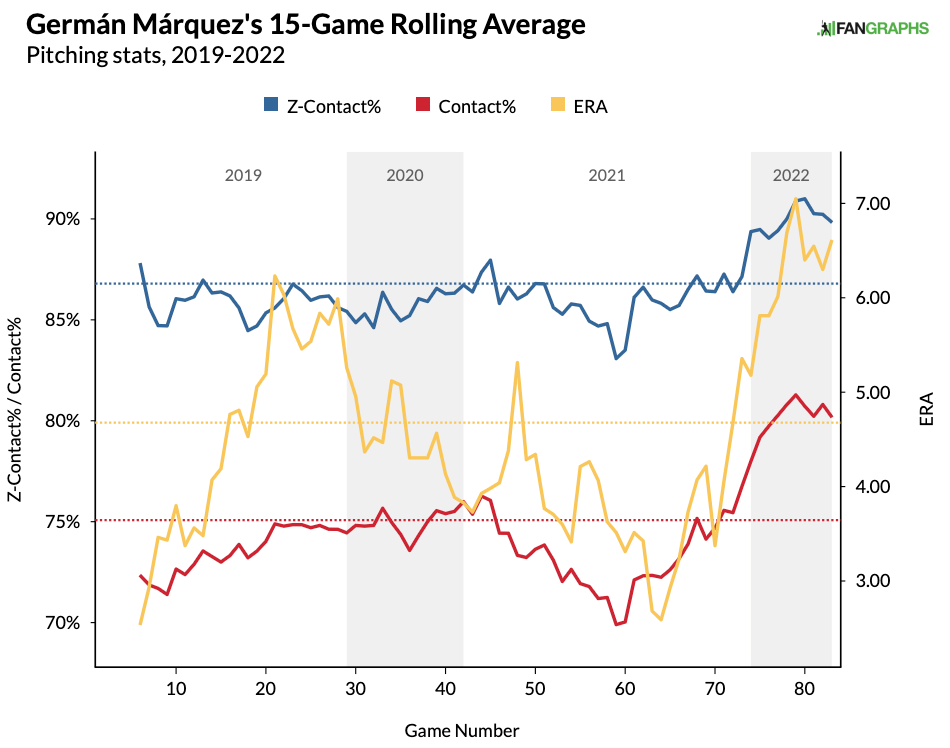 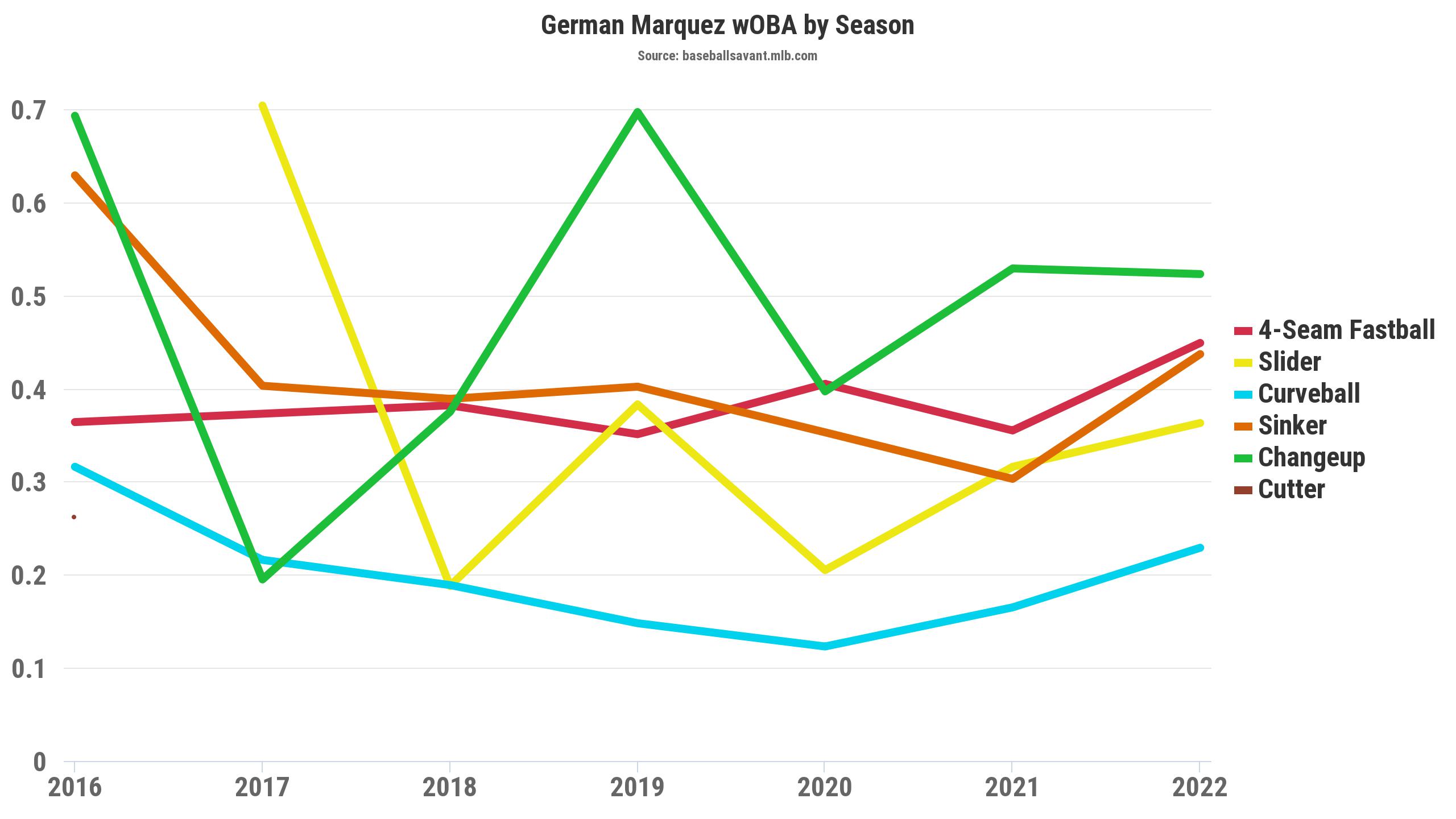 Unsurprisingly, Márquez's four-seamer gets crushed with a .364 BA, .597 SLG, and .450 wOBA. For context, the four-seamer resulted in a .275 BA, 440 SLG, and .355 wOBA in 2021. Interestingly, Márquez lowered the four-seamer nearly ten percentage points to 34.4% and increased the curveball and sinker. Like Márquez's other pitches, the sinker hasn't been as effective in generating ground balls, with a 58.8% GB% versus a career rate of 64%. 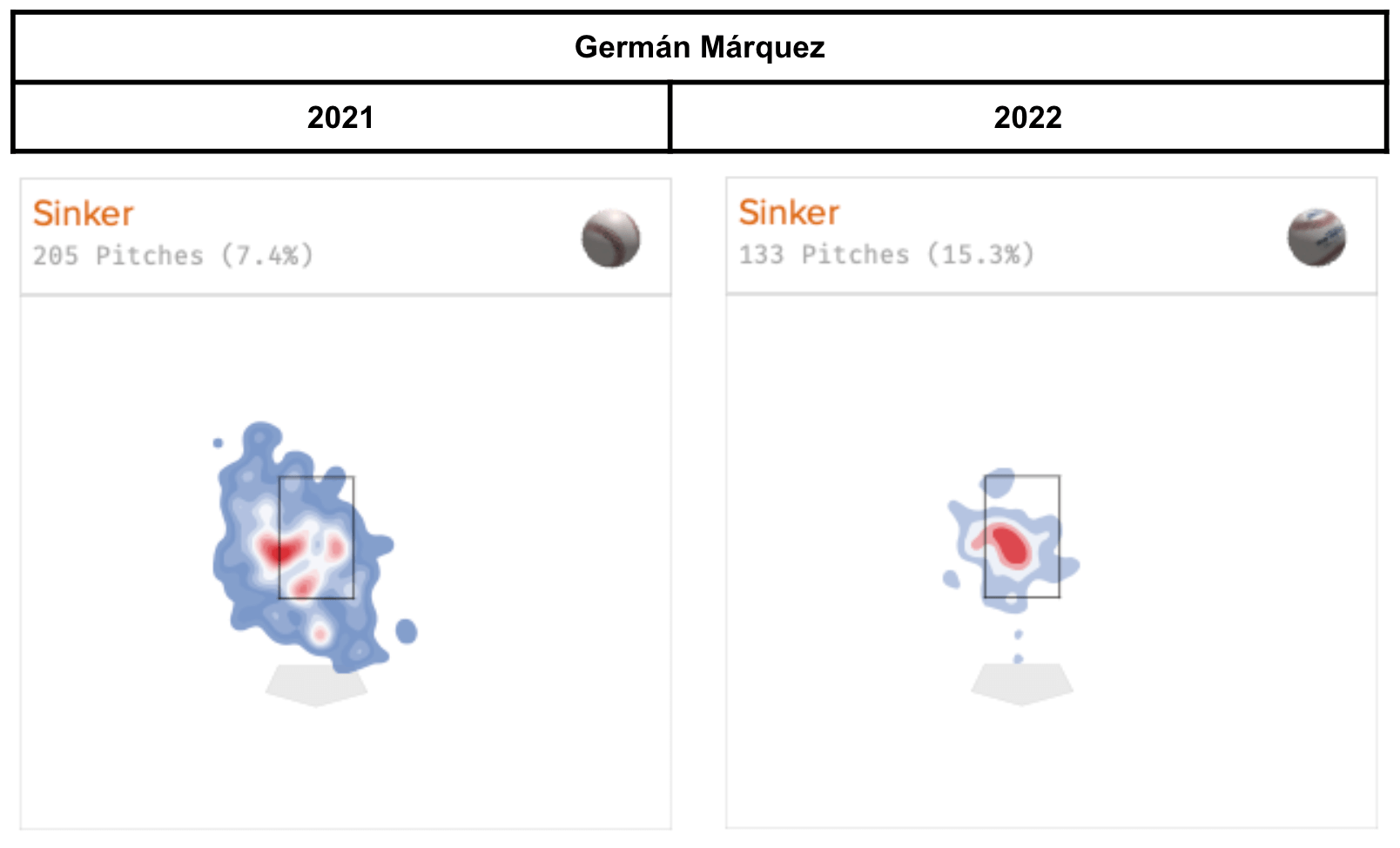 Márquez has struggled with locating the sinker with a brutal .380 BA, .640 SLG, and .438 wOBA. The visuals show Márquez throwing the sinker in the heart of the zone in 2022 compared to low and inside to right-handed hitters.

In dynasty formats, fantasy managers should hold and hope for a trade away from the Rockies. With Márquez's value low, it's logical to buy low in dynasty leagues, though poor recency bias taints that thought. It's hard to rely on Márquez in redraft leagues with the poor ratios, home run concerns, and ineffective breaking pitches. Since Márquez has multiple problems to fix, it's concerning for the rest of the season. When the rest of the season projection via THE BAT has an ERA above 5.00 and WHIP north of 1.60, that indicates avoid unless we witness multiple positive indicators.

As a Mariners fan, the trade between the Reds and Mariners seemed intriguing. In mid-March, I broke down some of the lesser-known players involved in that deal Jake Fraley, Justin Dunn, and Cristian Pache. When healthy, Jesse Winker posted quality numbers, especially in OBP leagues, with a career OBP of .377. Winker started the season cold with a .218 batting average, .323 OBP, and three home runs. The Mariners moved Winker around in the lineup, but he batted leadoff in nine straight games. 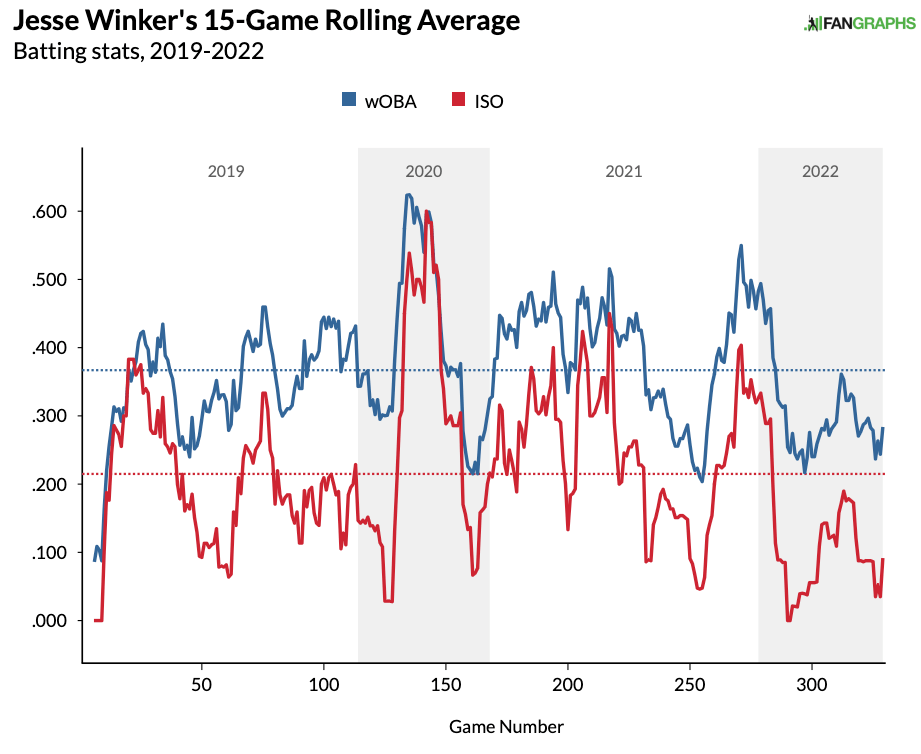 Winker's batted-ball profile remained the same outside of the drop in HR/FB% at 4.8% versus a career rate of 17.9%. The issue might lie in the hard-hit data with similar batted ball and plate discipline data. Unfortunately, that's not the case, with Winker posting a 6.4% Barrel% and 4.5% Barrel/PA. For context, Winker's Barrel% hovered around 11-13% and the Barrel/PA at 7-8% in 2020 and 2021. 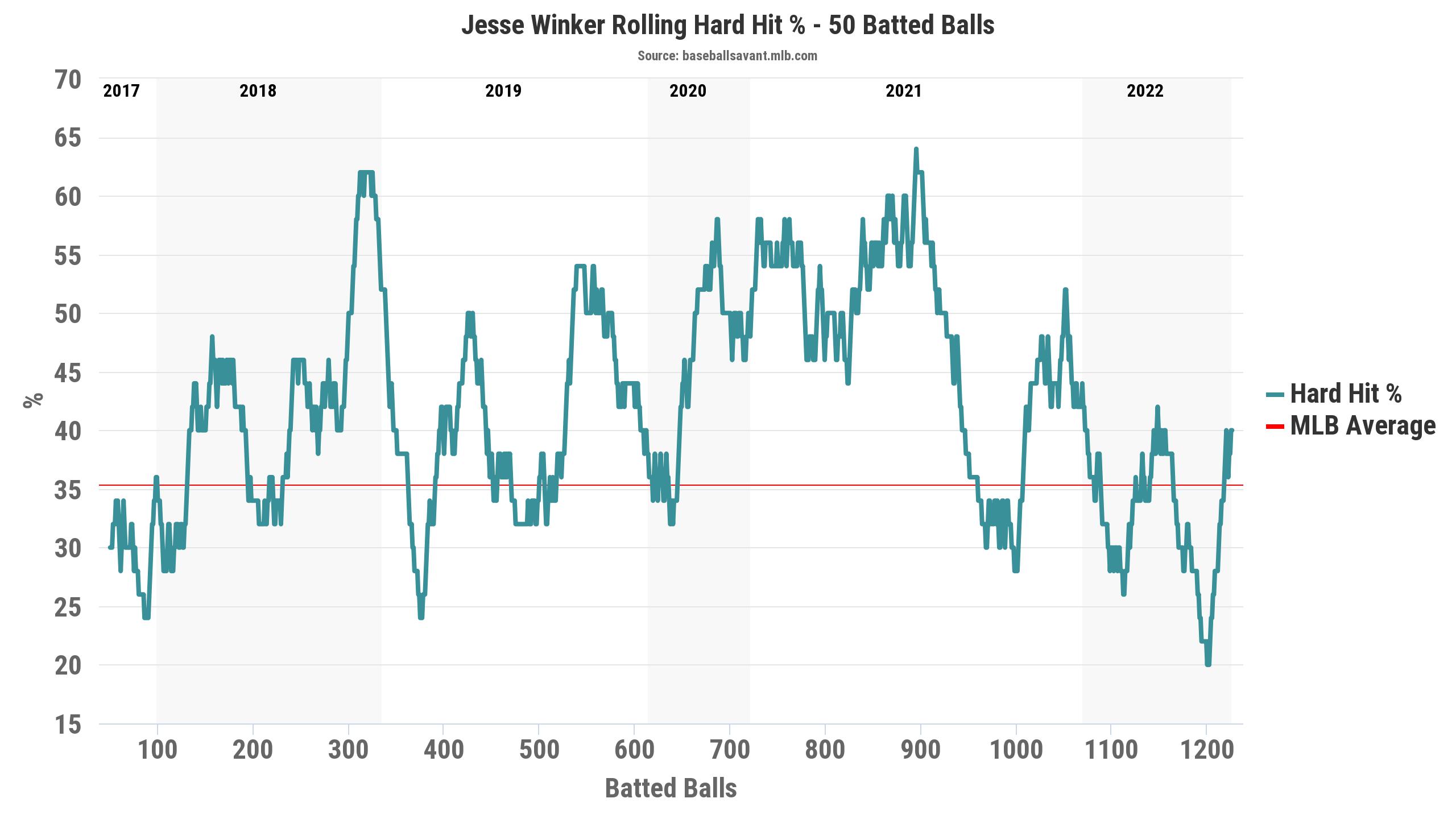 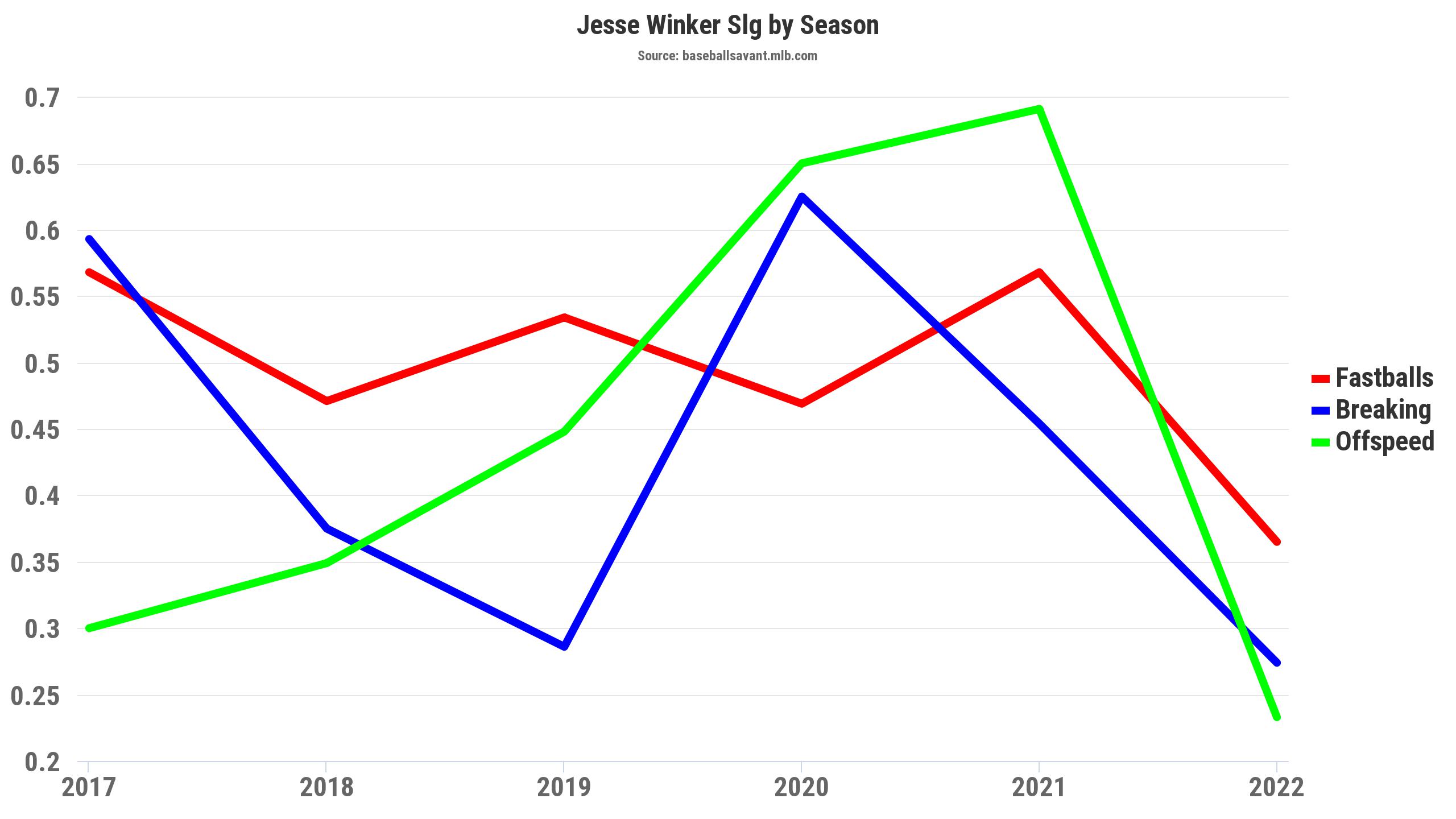 Unsurprisingly, Winker struggled against all pitch types, especially fastballs and offspeed pitches. Winker typically crushed fastballs with a .568 SLG and .423 wOBA in 2021 versus a .365 SLG and .328 wOBA in 2022. It could mean Winker is struggling with timing, or the park factor changes are impacting him in 2022.

THE BAT X projects Winker for 12 home runs, 47 runs, 45 RBI, and one stolen base with a .259 batting average. It assumes Winker's BABIP, OBP, and ISO should regress closer to the career averages. In 12-15 teamers with five outfielders, hold and bench Winker given the need for the position. However, it's understandable if Winker lands on the waiver wire in shallower formats since the production and underlying metrics look worrisome.