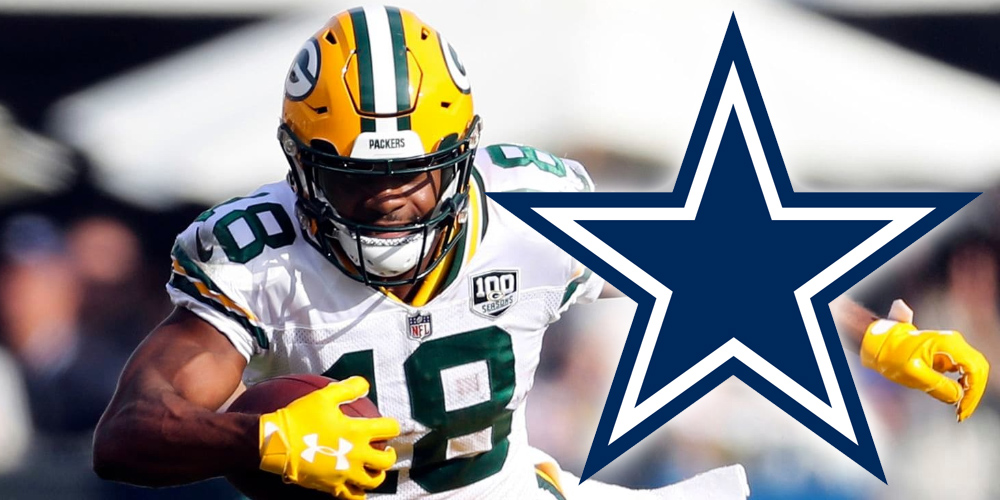 4 Reasons to Buy Low on Randall Cobb in Fantasy 2019

Randall Cobb's tenure with the Green Bay Packers ends after eight seasons as he signed a one-year, $5 million contract with the Dallas Cowboys. A second-round draft pick in 2011, Cobb was signed to replace slot receiver Cole Beasley who signed with the Buffalo Bills. This article will share four reasons Cobb is undervalued heading in fantasy drafts right now.

1. Cobb is essentially free at his ADP 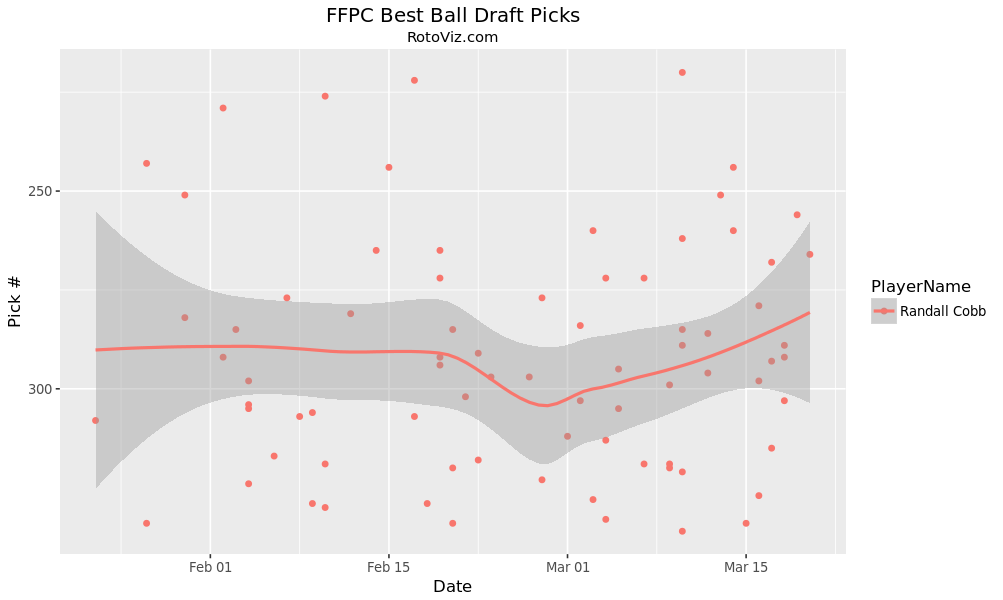 Cobb's ADP or average draft position has been flat so far in 2019 when you look at data from the FFPC (Fantasy Football Players Championship). The trend is similar when you review Fantasy Football Calculator, Fanball and Fantrax Best Ball Draft Picks. Cobb has averaged 12.7 PPR points per game in his career. Few players selected at this stage of fantasy drafts offer the ability to greatly outperform their ADP. 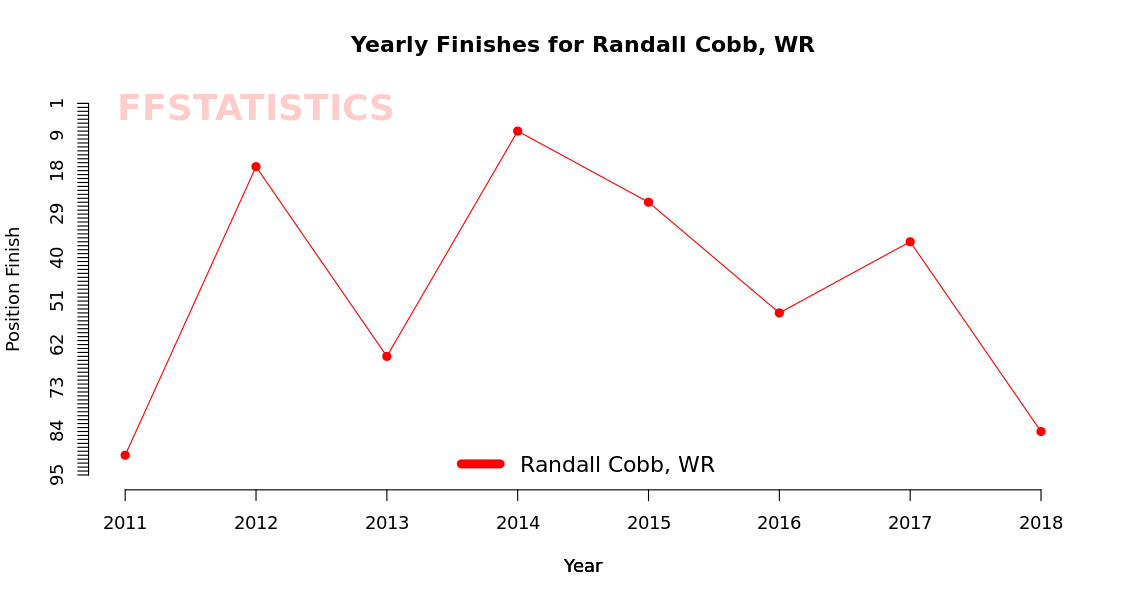 It's easy to allow recency bias to creep in when thinking about Cobb's most recent season, but the 28-year old receiver has had multiple top-36 finishes at his position. Let's dive deeper into what made Cobb's previous seasons so successful.

Cobb had the benefit of playing his entire Packers career with future Hall of Famer Aaron Rodgers. His agility, route running, and yards after the catch ability would have also benefited other quarterbacks under center.

Cobb’s most notable season with the Packers was in 2014. He posted career highs in receptions (91), receiving yards (1,287), and receiving touchdowns (12). It is useful to understand the relationship between expected points (EP) and fantasy points over expectation (FPOE). EP is based on the average fantasy points value of plays in similar down, distance, and field position instances. Receiving FPOE, on the other hand, takes into account a wide receiver's actual fantasy points and takes out the expected points. EP measures volume while FPOE measures efficiency. Cobb has a career positive receiving fantasy points over expectation. His target share has shrunk over the last three seasons due to the emergence of Davante Adams, but he's still been productive. Cobb will have an opportunity to bounce back in Dallas.

Cobb has better career stats on a per game basis than former Cowboys wide receiver Cole Beasley in multiple areas when he's been on the field. His health is a legitimate concern. Did you know Cobb hasn’t played a full 16-game season since 2015?

The trend continues when isolating Cobb and Beasley's production from 2016 to 2018. This is also the time frame Dak Prescott has been the Cowboys starting quarterback.

The arrival of wide receiver Amari Cooper brought a shot of adrenaline to the Cowboys passing game. He averaged 8.4 targets per game since joining the team in Week 9 of the 2018 season. Beasley averaged 4.7 targets per game over the same time frame. The only other Cowboys wide receiver with more targets than Beasley (43) over the last nine games was Michael Gallup (46). Many anticipate that Cooper will open the 2019 season as the No. 1 receiver, Gallup as the No. 2, and Cobb as the No. 3.

Cobb, like Beasley, has also shown that he can thrive in environments where he's not the No. 1 receiver. He is expected to line up mostly from the slot taking advantage of defensive soft spots, but Cobb has the ability to threaten defenses vertically lining up on the outside. Are you aware that 13 of his 41 career touchdowns have come from 30 yards or more? Cobb could split time lined up on the outside and in the slot with Cooper. The Cowboys also struggled in the red zone last season ranking 26th in touchdown scoring percentage. Were you aware that 53 percent of Cobb's receiving touchdowns came from inside the 10-yard line? He has a career catch rate of 70 percent and has been ridiculously effective. There are multiple ways Cobb could improve the Cowboys passing offense this season to complement their successful rushing attack.

3. The Perception of the Cowboys Offense

The first image that enters your mind when you think of the Cowboys offense is Ezekiel Elliott running the football.

The Cowboys rushing attempts, rushing yards, and rushing fantasy points over expectation has trended down since 2016. The team's passing attempts have trended up. Prescott excels as a passer in the short to intermediate part of the field as shown in the chart below using Adjusted Yards per Attempt per target location. 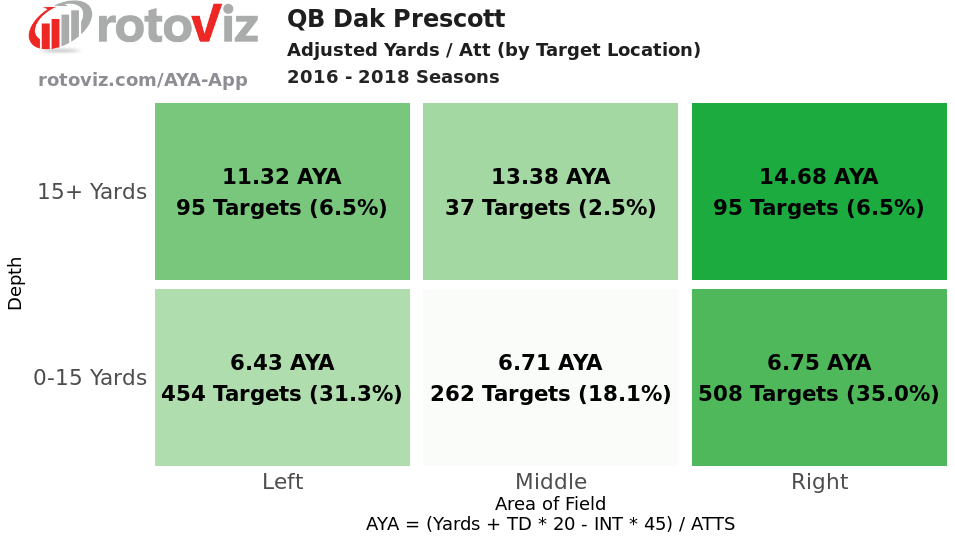 Elliott will continue to be a focal point of the Cowboys offense. The team's offensive line has ranked in the top eight in Adjusted Line Yards three consecutive seasons according to Football Outsiders. This formula takes all running back carries and assigns responsibility to the offensive line based on the length of the run.

The Cowboys believe Prescott has earned a contract extension entering the final year of his rookie contract. It sounds like the team is prepared to break the bank on the fourth-round pick. The Cowboys traded a first-round draft pick for Cooper, drafted Gallup in the third round of the 2018 NFL Draft, and signed Cobb. These moves suggest the team would like to see him further develop as a passer. 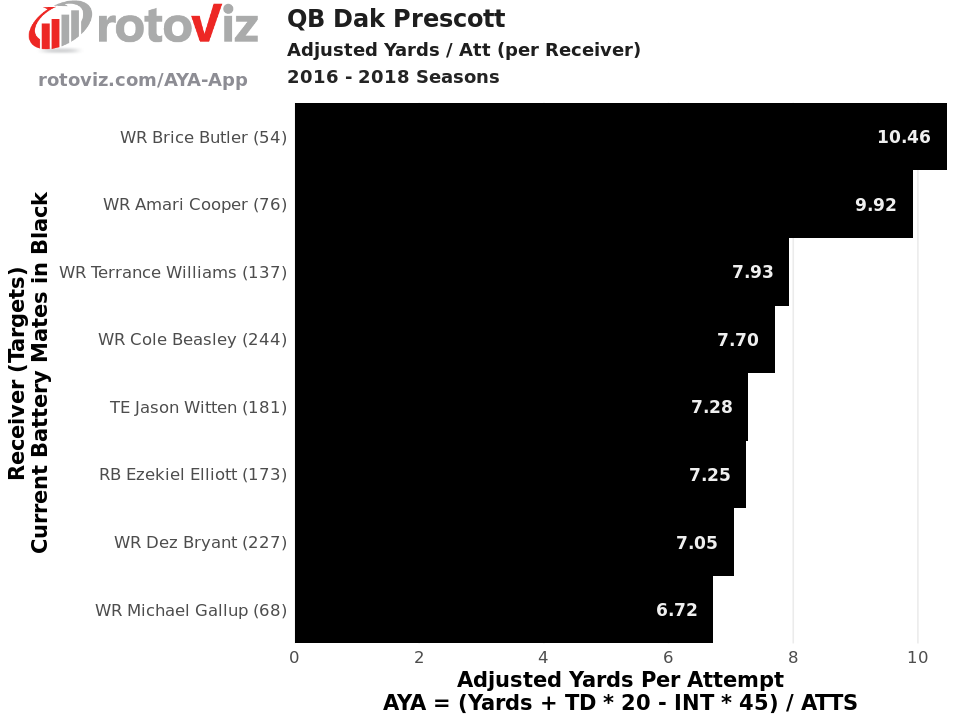 The presence of Cobb can help Prescott's development considering his adjusted yards per attempt with Beasley since 2016. Prescott finds himself in an excellent position to have a career season in 2019.

Cobb is actually younger than Beasley, but does he have another peak season left in him? Mike Braude, RotoViz contributor and co-founder of Apex Fantasy Leagues, publishes an article every season that analyzes the peak age for an NFL wide receiver. He defined a peak as a wide receiver with 225 or more PPR fantasy points. This gives us a sample size of 308 seasons since 2000 with the average age for this group being 27.3 years old. 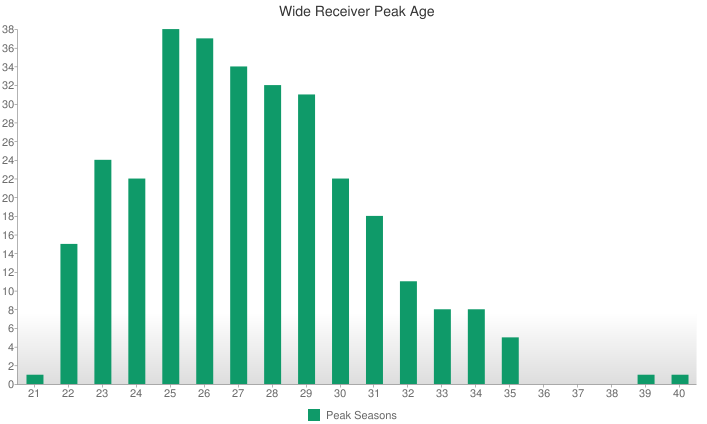 Cobb will turn 29 in August. A steady decline takes place after a wide receiver's age 29 season. If Cobb plays close to 16 games it is in the realm of possibilities that he finishes with 225 or more PPR fantasy points.

Cobb is coming off of his worst statistical season as a professional. He can be a valuable contributor to the Cowboys in 2019 and your fantasy football team as a WR4 with WR3 upside. Cobb is a player to keep on your watchlist as you prepare for upcoming fantasy drafts. It is always rewarding to have identified players who were in the right situation at the right time who greatly outperformed their ADP. These players become key contributors in deeper formats or injury replacements in route to the fantasy playoffs or potentially a championship. Cobb could be one of those players for your fantasy team.

Thanks for reading and please sign up for FantasyData Premium.