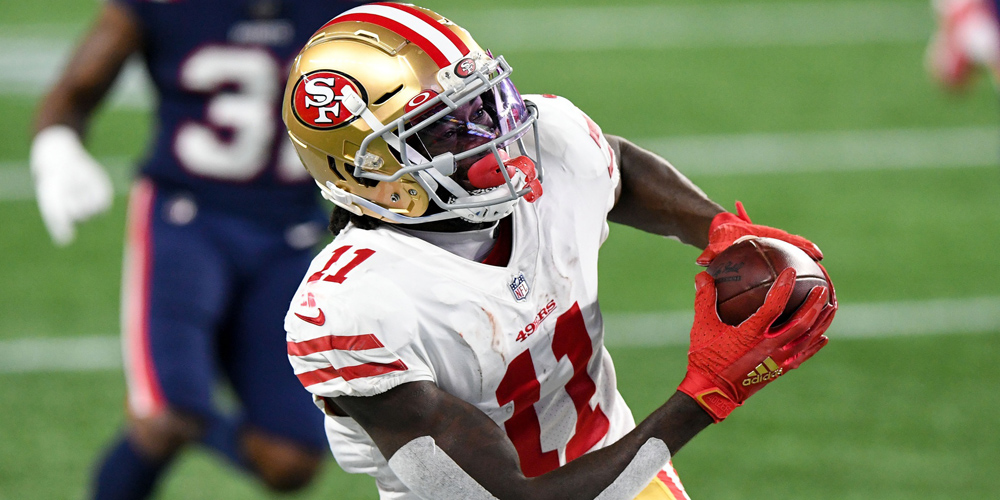 In a wild Week 11, the Titans lost to the Texans, and Taylor Heinicke, Trevor Siemian, and Colt McCoy all finished as top-10 quarterbacks heading into Monday night. Running backs dominated Week 11 in Joe Mixon, D'Andre Swift, and some back named Jonathan Taylor. The Kansas City and Dallas game totaled 28 points - one of the lower totals of the week. Unfortunately, we had several injuries to fantasy-relevant players. We'll briefly discuss those and dive into the Week 11 winners, losers, and takeaways.

From @ChiTribKane: Justin Fields’ status for Thursday’s game in Detroit is suddenly up in the air due to a ribs injury.

Andy Dalton is readying himself to start on a short week.https://t.co/qu3eNpVOJX

#NajeeHarris with a leave me alone shove to the @steelers head team physician as he heads off the field. pic.twitter.com/cryXGhMRPD

What a game for Jonathan Taylor. The RB1 season continued. Taylor rushed for 185 yards and four touchdowns on 32 carries as the Colts blew out the Bills 41-15. Taylor caught his fifth touchdown with three receptions and 19 receiving yards. He entered Week 11 as the No. 2 running back with 21.1 fantasy points per game. Taylor also boasted over 110 or more total yards in nine out of 11 games total.

Elijah Moore With a Touchdown in Three Straight Games

With Joe Flacco at quarterback, Elijah Moore led all Jets receivers in receiving. The rookie hauled in eight out of 11 targets for 141 receiving yards and one touchdown. From Week 8 to 10, Moore totaled the 7th-most fantasy points amongst receivers between Stefon Diggs and CeeDee Lamb. Amongst the top-12 in total fantasy points over the past three weeks (Week 8-10), Moore has the lowest Weighted Opportunity Rating (WOPR) at 0.355. The next closest receiver in WOPR - Michael Pittman at 0.52. That indicates Moore's target share and air yards share hasn't ended up that high during that stretch. However, Moore produced efficiently and pushed himself up into the upside WR4 group.

Side note - during that span, Moore has the lowest WOPR at 0.355. The next closest receiver in WOPR - Michael Pittman at 0.52. #FantasyFootball pic.twitter.com/tMJ1CsmiUP

With no Elijah Mitchell for the 49ers, the team used Deebo Samuel again in the running game with eight rushing attempts for 79 rushing yards and one touchdown. The 49ers led the entire game, evidenced by over 38 minutes in time of possession. That said, the passing volume remained low, but Brandon Aiyuk finished efficiently by hauling in all seven targets for 85 receiving yards and one touchdown. Aiyuk landed as a Week 11 sleeper since the snap share, routes, and target volume trended up in Week 8 and 9. Hopefully, that continues down the stretch so fantasy managers can value Aiyuk as a WR3 with upside.

In a positive game script, the Eagles rushed for 242 yards. Miles Sanders led the team with 94 yards on 16 rushing attempts. They controlled the time of possession at just over 37 minutes. As expected, the Eagles mixed in another running back in Jordan Howard with ten attempts for 63 rushing yards, but Jalen Hurts scored three rushing touchdowns, which led to empty days for Howard and Sanders. We'll see how the snap shares shake out, but Miles Sanders earned 32% of the team attempts, or 50% of the running back attempts, which gives us optimism moving forward.

The Panthers named Cam Newton the starter heading into Week 11, and he scored three touchdowns. Newton passed for two touchdowns and 189 passing yards with 46 rushing yards and an additional score. As I noted last week, Newton will provide startable weeks, given the rushing ability.

Per @FantasyDataNFL, Cam Newton scored 11.72 fantasy points - No. 14 at quarterback with the afternoon games winding down. Two touchdowns on seven opportunities by Newton. That's fun. He'll have some startable weeks in the future if given the opportunity to start. pic.twitter.com/eK2iZfCPF0

It's worth streaming and starting Newton even in 1QB leagues assuming fantasy managers don't already have a stud quarterback. Even if you waited for Russell Wilson, folks should scoop up Newton and play him over Wilson until we see more consistency for the Seahawks offense. Christian McCaffrey's role looks unaffected with just under 120 total yards as the Panthers' leading receiver. However, Newton should help D.J. Moore, who scored a touchdown and finished with 50 receiving yards. Moore hadn't reached 50 yards since Week 8, and it's his first game with a touchdown since Week 4.

James Robinson entered Week 11 questionable with knee and heel injuries. In Week 11, the Jaguars totaled 200 yards with an average of 286 over the previous three games. James Robinson rushed for 29 yards on 12 attempts and one touchdown. Thankfully, Robinson caught two passes for nine receiving yards to reach double-digit fantasy points. Outside of Robinson, fantasy managers can't confidently start any other Jaguars player. Even though we remain hopeful for Marvin Jones and Laviska Shenault, Trevor Lawrence averages 4.83 yards per attempt over the past four games. That's brutal for Lawrence and the Jaguars' offense.

Against the Texans, Ryan Tannehill threw four interceptions. That's the first time Tannehill threw more than two picks since Week 13 in 2016 with the Dolphins. Through ten games in 2021, Tannehill threw eight interceptions, then four more against a weak Texans defense. The Texans allowed the third-highest yards per attempt at 8.1 behind the Lions and Jets. Although Tannehill passed 52 times, the 323 passing yards and one passing touchdown don't make up for the turnovers.

With no Derrick Henry, this backfield remains frustrating. pic.twitter.com/acgdoy66nk

The Titans running game keeps frustrating fantasy managers as they mixed in Dontrell Hilliard for 35 rushing yards and 47 receiving yards. With Jeremy McNichols out, Hilliard garnered more playing time and opportunity. Stay away from the Titans running game for now. Keep an eye on Hilliard's usage because it's either the negative game script or an outlier with the ten targets (19.2%). That's the highest target share to any Titans' running back since Week 4 when McNichols boasted a 24% share.

Najee Harris Puts Up Low Rushing Yards Against The Chargers

Before Week 11, the Chargers allowed the most rushing yards per game at 155.1, almost 20 more yards per game than the Texans at 136.9. They gave up the second-most touchdowns (12) and fourth-most fantasy points per game (23.5) to the position. Najee Harris recorded one of his lowest totals since Week 1 but still garnered a decent workload per usual. The Steelers played from behind all game and came roaring back with 24 points in the fourth quarter to tie it at 34.

Harris hasn't produced efficiently with a -8.7 (No. 52) Production Premium. Who cares - backs with volume 🔥#FantasyFootball pic.twitter.com/r8ir5Jq6eN

Harris left the game briefly, and thankfully, they cleared Harris to return. Hopefully, Harris doesn't miss time because he's one of the better young backs in the game. Through the first nine games, Harris garnered the highest Opportunity Share (89.9%) and Weighted Opportunities (193.5) amongst qualified backs. Although Harris hasn't produced efficiently, evidenced by the 4.4 (No. 45) yards per touch and -8.7 (No. 52) Production Premium, he created 618 (No. 3) yards. On a per attempt basis, Harris averaged 2.81 (No. 30) yards created per touch with a 26.4% (No. 33) Juke Rate. With backs, we want volume, and that's what Harris garners.