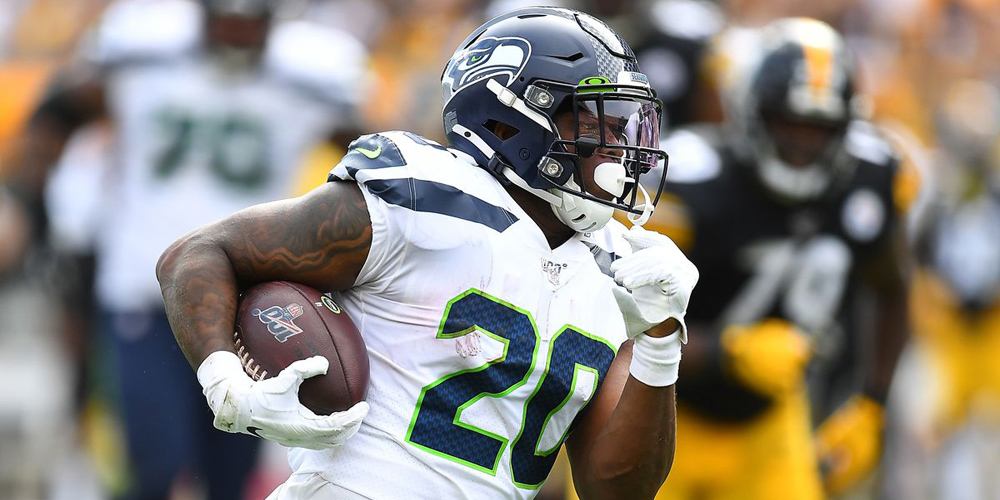 We had no Thursday Night Football game, but the early games on Sunday gave us some exciting fantasy performances in Joe Burrow and Ja'Marr Chase, plus the Patriots backfield. Hopefully, fantasy managers survived the Sunday slate of games with a chance to win on Monday night. In the final installment of the Week 17 Winners, Losers, and Takeaways, we'll break down the injuries to monitor, plus several highlights, wonders, and disappointments.

Last week, Tee Higgins feasted, and Ja'Marr Chase thrived. However, in Week 17, Chase boomed and soaked up just under 60% (59.6%) of Burrow's passing yards with 266 on 11 receptions with 12 target targets and three touchdowns. The Burrow - Chase stack could've won fantasy managers their league in Week 16 and 17. Chase set records against Kansas City, and you love to see it.

The Patriots Steamroll the Jaguars

In a 50-10 win against the Jaguars, the Patriots eventually sent in the backups. Damien Harris scored two rushing touchdowns with 35 rushing yards on nine carries. Although he helped fantasy managers with the two rushing scores, Rhamondre Stevenson led the backfield with 19 carries, 107 rushing yards, and two touchdowns. Stevenson also ended up as a Week 17 sleeper, so hopefully, you started him against a soft matchup.

Even two of the top Patriots pass-catchers in Kendrick Bourne and Jakobi Meyers put up 70 receiving yards, with Meyers scoring a touchdown. Meyers garnered a healthy 24.2% (No. 20) target share with a 29% (No. 31) Air Yards Share. However, the Patriots emphasized the run game, evidenced by 31.5 (No. 25) Team Pass Plays Per Game versus the 8th-most Team Run Plays Per Game at 28.3. Overall, Mac Jones quietly put up one of the better rookie seasons with the hype surrounding Justin Fields, Trey Lance, and Trevor Lawrence.

In one of the most anticipated starts of the week, Trey Lance performed efficiently as a passer with 249 passing yards, 10.8 YPA, two touchdowns, and one interception. Although Lance didn't add as many rushing yards as we hoped, he still totaled 31 yards on the ground. Lance almost scored a rushing touchdown, but it got called back via penalty. We'll see what the advanced stats look like, but Lance's passing metrics looked awful in the small two-game sample from earlier this season.

The 49ers welcomed back Elijah Mitchell for a smash spot against the Texans. Mitchell garnered his typical heavy workload as the 49ers continued with their lead backs. In Week 17, Mitchell reached his fifth game with 100+ rushing yards with 119 on 21 carries. Mitchell even added a receiving score with two receptions and 11 receiving yards. That's Mitchell's first receiving score of the season, with five rushing touchdowns heading into Week 17. After all the talks about Mitchell not being a league-winner since he hasn't played since Week 13, well, Mitchell thrived during the championship tied for RB6 heading into the Sunday night game.

Trey Lance brought a vertical element to the 49ers offense in his second career start.

Lance averaged the most air yards/attempt (11.5) and threw for the most yards on 10+ air yards passes (205) by any 49ers QB in a game over the last three seasons.#HOUvsSF | #FTTB pic.twitter.com/EBe38tvrUU

In a battle between two of the worst teams in football record-wise, Rashaad Penny smashed against the Lions with 80 total points between both squads. Penny logged 25 rushing attempts, 170 rushing yards, and two rushing touchdowns. Heading into Sunday night, Penny ranks as the No. 1 back with 32.5 fantasy points in PPR leagues. Penny served as a league winner in 2021 with three RB1 performances in the past four games. It's positive to see Penny healthy down the stretch.

In the highest-scoring game of the week, rookie Amon-Ra St. Brown thrived again with eight receptions on ten targets (37%), 111 receiving yards, and one touchdown. St. Brown also added two rushing attempts for 23 rushing yards and a rushing touchdown. Since Week 13, St. Brown ranked 6th with 89.6 fantasy points total amongst all pass-catchers heading into Week 17. He finished as the WR2 behind Ja'Marr Chase and ahead of D.K. Metcalf.

On the Fantasy Football Fanalysts show, Bradley and I discussed St. Brown and his dynasty value. Bradley argued to shop St. Brown given the potential peak value with the WR1 type opportunity and production over the past five weeks. Although I leaned with holding St. Brown, it's a good idea to shop St. Brown based on some of the dynasty trade calculators and rankings.

D'Onta Foreman Solidified Himself as the Titans Workhorse Without Derrick Henry

The Titans ended the Dolphins' seven-game win streak. In the wild 2021, the Dolphins went 1-7, then reeled off seven straight before losing to the Titans in Week 17. Foreman dominated the backfield touches, particularly in the rushing game with 26 carries, 132 rushing yards, and one score. Dontrell Hilliard chipped in with eight rushing attempts for 45 rushing yards and one score, plus hauled in all three receptions for 33 receiving yards. In dynasty leagues, hold onto Foreman as the primary backup for Derrick Henry since the Titans want to establish the run.

In my Week 17 sleepers article, I mentioned Zay Jones as a deep-league sleeper based on the opportunity. Since Week 12, Jones ranked 22nd in Weighted Opportunity Rating (WOPR), which combines target share and Air Yards Share. Jones finished a team-leading 120 receiving yards on eight receptions with ten targets (32.3%). In Week 15 and 16 combined, Jones totaled 117 receiving yards. Surprisingly, Jones reached the 100-yard receiving mark for the first time in his career in Week 17.

Meanwhile, Hunter Renfrow continues to look like an underappreciated stud with seven receptions on nine targets (29%) for 76 receiving yards and one touchdown. Renfrow ranked 9th with 92 receptions and 18th with 949 receiving yards heading into Week 17. From Week 9 to 14, Renfrow ranked as WR10 with 131.7 fantasy points total with 16.5 points per game. After a couple of down games, Renfrow bounced back for 20.6 fantasy points as the WR5 heading into the afternoon games. Renfrow remains one of Derek Carr's favorite targets, with the 4th-best Target Separation at 2.19.

Without Antonio Gibson in Week 17, Jaret Patterson totaled 98 yards with 57 rushing and 41 receiving yards on 17 touches. If fantasy managers scooped up Patterson and played him, they reaped the rewards. In the preseason, Patterson showed his potential as a rusher and receiver. Although Patterson's workout metrics don't pop off the page, he put over 2,000 total yards in 2019 as a sophomore. Patterson's 43.4% (93rd-percentile) College Dominator indicates he's someone to keep an eye on in 2022.

In Week 17, Saquon Barkley finally rushed for over 100 yards against the Bears. It's only Barkley's second game in 2021 with over 100 total yards. In a 29-3 blowout loss, Barkley shared rushing touches with Devontae Booker but outproduced him. Barkley totaled 21 rushing attempts with 102 rushing yards, with Booker having 18 rushing attempts for 46 yards.

Saquon Barkley just went over 100 yards on the field where he tore his ACL last year.

Neither back produced in the receiving game since Mike Glennon gave us an awful performance of 24 passing yards, 2.2 YPA, and two interceptions. That's -5.74 fantasy points, almost as poor as Nathan Peterman's five-interception day in 2017 (-6.96). It's a positive end to Barkley's fantasy season. Barkley boasted the 19th best Juke Rate at 28.6%, but the offensive line remains a problem, evidenced by the 6.2 Run-Blocking Efficiency (No. 66).

Against the Vikings without Kirk Cousins, Davante Adams, Aaron Jones, A.J. Dillon, and Allen Lazard thrived Sunday night. Adams hauled in 11 of 14 (36.8%) for 136 receiving yards and one touchdown. Lazard scored efficiently. He reeled in all six targets for 72 yards and one touchdown. Meanwhile, Jones totaled over 100 yards with 76 on the ground and 30 through the air on 13 total touches. Dillon stole two rushing touchdowns and 63 rushing yards on 14 attempts, plus two catches for 20 additional yards. We love that they took advantage of a soft matchup and capitalized on it for fantasy purposes.

Only fourth time in #Packers history a pair of RBs have crossed 1,000 yards from scrimmage. On a team with MVP QB and best WR in game, their 1-2 backfield punch should not be forgotten.

In one of the oddest instances in the NFL, Antonio Brown took off his jersey in the middle of the game and left the field before the game ended. Tampa Bay surprisingly battled against the Jets for a narrow 28-24 win. Rob Gronkowski led the Buccaneers pass-catchers with seven receptions on ten targets for 115 receiving yards. Brown hauled in three receptions for 26 yards on five targets. It came after Brown notched the second-highest target share at 51.7% in Week 16.

Here's a sideline view of what happened with Antonio Brown. Looks like Mike Evans was trying to calm him down but nothing was going to help. AB took everything off and left.

After a down week against the Raiders, the Broncos running backs struggled against the Chargers, who allowed the second-most fantasy points to the running back position. Javonte Williams finished with 14 carries for 30 rushing yards. Meanwhile, Melvin Gordon led the team with ten carries for 43 rushing yards. In what looked like a bounce-back opportunity, the Broncos' offense continues to struggle, possibly with Drew Lock at quarterback.

Obligatory Javonte Williams mention with 2.9 YAC, but an awful -1.1 YBC. That translates to 167% of Williams' yards coming after contact in Week 16.

Thankfully, Williams & Melvin Gordon should bounce back in Week 17 against the Chargers.

Sometimes we find teams lacking any time of possession, but the Broncos nearly matched the Chargers with just under 30 minutes and 319 versus 341 total yards. The peripherals and productivity for Williams looked great, evidenced by the 33.6% (No. 10) Juke Rate and 3.62 (No. 8) Yards Created Per Touch. Hopefully, Williams builds upon the solid rookie campaign as he should. Given the Broncos' receivers, we hope they upgrade at quarterback in 2022.

Without Kirk Cousins on Sunday night, the Vikings' offense struggled with 206 total yards. They barely possessed the ball with just under 21 and a half minutes compared to over 38 minutes for Green Bay. The former Oregon State quarterback in Sean Mannion tossed 189 yards with 5.3 YPA and one touchdown. Mannion fed Justin Jefferson 11 targets, but he only hauled in six receptions for 58 receiving yards - the team leader. Tight end Tyler Conklin finished with the second most targets at nine with five receptions for 47 receiving yards.

K.J. Osborn caught Mannion's only touchdown with three receptions and 50 receiving yards on five targets. We haven't even mentioned Dalvin Cook, who returned with a measly 13 rushing yards on nine carries. Cook caught all three targets for zero yards. Fantasy managers with Vikings players outside of Osborn likely got disappointed in Week 17.