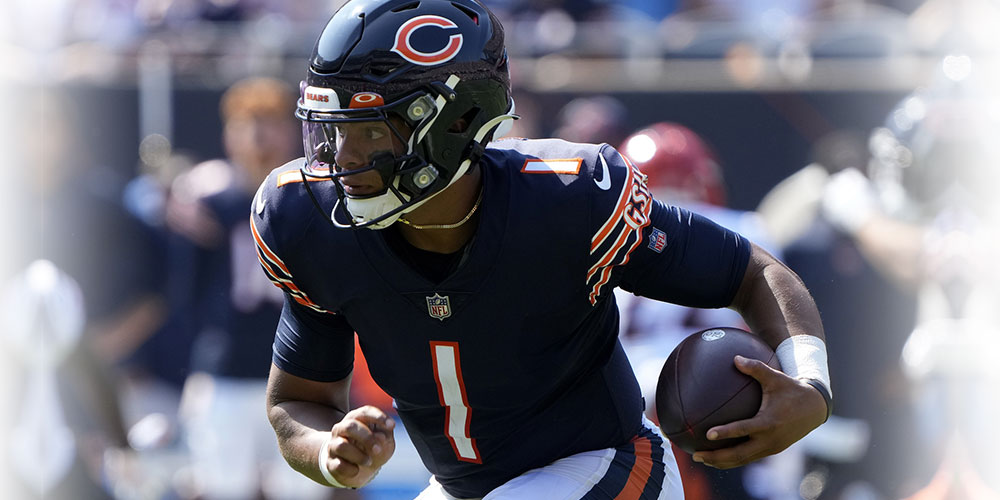 Injuries headlined Week 2, and a lot of them. From Laviska Shenault, Jarvis Landry, Tua Tagovailoa, and the 49ers running backs. We'll note a handful of the significant injuries to monitor with the recent updates, and we hope some may not end up too serious. After many attacked the waiver wire to grab Elijah Mitchell via FAAB, he performed relatively well given the opportunities. However, early on, the production stunk, yet Mitchell earned the opportunities - a positive sign.

Since we won't have access to much of the advanced stats immediately, we'll touch on snap counts, target shares, and other metrics from Week 1. A few situations to monitor involved the 49ers and Bills running back usage. Also, I wanted to see if the Titans' offense would bounce back in Week 2. Then after watching games and checking box scores, other situations popped up.

Any other situations you're monitoring? Unfortunately, I likely won't have many advanced stats to dive into immediately.

With Zack Moss active, Devin Singletary took his first touch to the house for a 46-yard rushing touchdown. The final line for Singletary looked solid with 13 carries for 82 rushing yards and one touchdown. He added two catches on three targets for nine receiving yards. My apologies to folks that I suggested starting Laviska Shenault over Singletary in Week 2.

Zack Moss received some work in the red zone with eight carries for 26 rushing yards and two rushing touchdowns. Moss equaled Singletary in the receiving game with two catches for eight yards. However, Singletary stayed efficient with 5.7 (No. 16) Yards Per Touch last week and 6.1 in Week 2. If that continues, then Singletary's role gives us more confidence. When we consider Singletary's ability to create yards with 2.92 (No. 15) Yards Created Per Touch last season, he looks like the most skilled back for the Bills.

Watching the Texans battle the Browns with a 14-14 tie heading into halftime, I wrote up the headline - Texans Have Sleeper Appeal. Tyrod Taylor performed well before leaving with an injury. Taylor ended up as one of my Week 1 sleepers and raised eyebrows against the Browns after going 10-for-11 with 125 passing yards and one passing touchdown. Taylor rushed one time for a 15-yard rushing score.

Unfortunately, Tyrod Taylor's hamstring injury moves us off Taylor in 1-QB leagues. Brandin Cooks kept earning a massive 48.3% target share for nine of 14 targets and 78 receiving yards with a touchdown. Given the likelihood of Cooks' target volume staying high, he should stick as a WR2 in most weeks.

JaMycal Hasty received some looks in the red zone in the third quarter. However, before that, the entire 49ers run game stunk. Elijah Mitchell initially looked like he ran in a goal-line touchdown. However, Mitchel''s touchdown call got overturned then Jimmy Garoppolo ran a sneak. In the first half, Mitchell barely produced much. However, don't panic because the opportunity metrics looked positive.

Elijah Mitchell handling EVERYTHING except the passing-down work in the first half:

JaMycal Hasty with 100% of LDD and 2-minute offense.#SFvsPHI

Mitchell also suffered a shoulder injury that led to him leaving the game in the third quarter. Trey Sermon suffered a concussion, and the 49ers' backfield injuries continued. However, Mitchell led the team in snaps and touches, although Hasty bested him in total yards.

Make sure JaMycal Hasty isn't hanging on waivers in your league since he may end up as the most healthy running back with Elijah Mitchell banged up and Trey Sermon's concussion.

It's hard to have too many takeaways from the Jaguars backfield against the Broncos. Admittedly, I underestimated the Broncos' defense as a legitimate real-life and fantasy defense. James Robinson led the backfield with touches and opportunities, but the tough defense kept all Jaguars pass-catchers in check outside of Marvin Jones.

Since Carlos Hyde lacks the pass-catching role, he only holds value in non-PPR leagues with a potential positive game script. I whiffed on Hyde as a sleeper in Week 2 but noted that it's hard to find too many RB sleepers early in the season unless we can foresee injuries. Robinson bests Hyde in snaps and Weighted Opportunities.

Even in snaps played, Johnson and Michael Carter led the backfield with an even split. With Tevin Coleman ceding snaps and touches (and rightfully so), scoop up Ty Johnson as a running back to stash in most formats. I still expect some pass-catching opportunities for Johnson, but the Jets' offense will likely continue their inconsistencies. That said, temper the excitement with rostering Ty Johnson and the Jets backfield. Also, feel free to cut Coleman at this point.

We figured it would happen sooner than later that Justin Fields would take over as the Bears starting quarterback. However, it came with a knee injury to Andy Dalton. Fields rushed for 31 yards, fumbled, and threw a pick with only 60 passing yards. Although the final line doesn't look great, we know Fields projects as an above-average real-life and fantasy QB. Fields could feast the next three weeks against the Browns, Lions, and Raiders, particularly against the latter two.

In a high-scoring contest, the Titans' offense rebounded after a brutal Week 1. Even though the Titans trailed early in the game, they stuck with the run, and Derrick Henry broke off some big plays to finish with his typical line of 35 carries for 182 rushing yards and three rushing touchdowns. Henry even caught all six of his targets for 55 receiving yards. Henry notched a career-high in targets and receptions in Week 2. Way back in Week 8 of 2016, Henry finished with a former career-best four catches on five targets.

Julio Jones led the Titans' receivers with 128 receiving yards after hauling in six of eight targets. Meanwhile, the Seahawks kept A.J. Brown in check with only 43 receiving yards yet caught three of nine targets. We still expect better games from Brown, but it's interesting to see how the Titans kept establishing the run and fed Henry even when trailing.

Ty'Son Williams produced efficiently once again with 13 carries for 77 rushing yards. Williams also caught both targets for 16 receiving yards. Even though Latavius Murray scored a rushing touchdown, Williams edged him in opportunities and snaps in Week 2. However, it looks like the Ravens still plan to mix in Murray and Devonta Freeman. We still prefer Ty'Son Williams, but he'll need to rely on the efficiency, which the Ravens offense typically provides.

Hey, look, Derek Carr connected for a big play with someone other than Darren Waller. Henry Ruggs III caught five of seven targets for 113 receiving yards and one touchdown. Carr connected with Ruggs on a 61-yard touchdown, and Ruggs reached a career-high seven targets with five as the previous high. Let's see if Ruggs can earn some consistent opportunities with regular production too.

Can we call Cooper Kupp a league-winner already after his Week 2 performance of nine receptions on 11 targets (37% target share), 163 receiving yards, and two receiving touchdowns? My oh my, the Kupp and Matthew Stafford connection looked unreal. Kupp dominated in Week 1 with 23.8 (No. 10) fantasy points with another elite 38.5% (No. 3) target share. Don't sell high on Kupp unless someone's giving you a WR1. Even then, fantasy managers may want to keep eating up the fantasy value and production given Kupp's ADP.

Nothing like a long touchdown reception to get those juices flowing on a Sunday afternoon. That's what Rondale Moore accomplished in Week 2 with the 77-yard touchdown connection with Kyler Murray. Moore landed in my Week 2 Sleepers article, and fantasy managers will want to flex him moving forward. With his elite 4.37 (96th-percentile) 40-yard dash, 135.3 (96th-percentile) Burst Score, and 10.78 (94th-percentile) Agility Score, Moore boasts the athleticism to break out as a rookie.

Rondale Moore is averaging 14.3 yards AFTER catch per reception this season

4.8 yards more than any other NFL player pic.twitter.com/rjyAPw9Djz

In an offense lacking pass-catchers, Michael Pittman hauled in eight of 12 targets for 123 receiving yards. Pittman's quiet Week 1 meant fantasy managers likely faded Pittman in Week 2. Zach Pascal led the Colts last week with two receiving scores, so expect some inconsistencies for the Colts receivers. It's worth picking up Pittman in deeper leagues, but not a top waiver priority or high FAAB bid.

Against a tough defense on the road, the Bengals' offense struggled on Sunday. Joe Burrow tossed a couple of touchdowns late but also threw three picks. Don't panic on Joe Mixon since he dominated the running back touches and opportunities once again in Week 2. Without Giovani Bernard, it's what fantasy managers hoped for regarding Mixon's opportunity. If anything, throw a buy-low offer on Mixon if you find Mixon's manager tilting over one game.

Next week, the Bengals could struggle again versus the Steelers. However, the week after, they face the Jaguars. Mixon's production in the running game could help the Bengals play-action game. Last year, Burrow's 61.2% (No. 31) Play-Action Completion% and 68.9% (No. 32) True Completion% looked awful with Mixon healthy for six games. However, with Mixon healthy in Week 1, Burrow boasted a 70% (No. 11) Play-Action Completion% and a 76.9% (No. 14) True Completion%. I expect that to continue for the most part, but they'll have to overcome any upcoming tough matchups in the AFC North first.

The Saints dealt with a COVID-19 outbreak and injuries, including missing coaches and players, and they played awful on Sunday against the Panthers. Alvin Kamara rushed eight times for five yards while adding four catches on six targets for 25 receiving yards. Although the Saints' defense played better later in the game, the team could muster much on offense. Don't panic with Kamara, as he should continue as the focal point of the Saints moving forward.