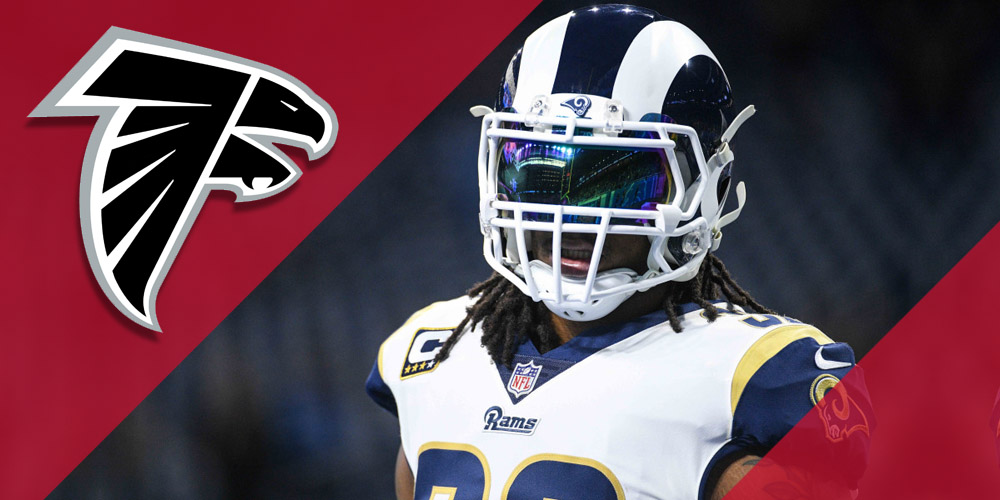 In a move predicted by many, running back Devonta Freeman was released by the Atlanta Falcons on Monday, March 16, 2020. This was done by the Falcons to relieve some salary cap space as they rank at the bottom of the league in terms of available cap space.  It did not take too long for the Falcons to replace Freeman as they signed the recently released Todd Gurley on Friday. They signed him to a one-year contract worth six million. With the new landing spot will Gurley's fantasy value bounce back in 2020 after he finished as the RB12 in 2019?

A breakdown of Todd Gurley’s incoming salary for the 2020 season: pic.twitter.com/x9WiR83BKj

The Falcons were a team that was pegged to address the running back position this offseason. By adding Todd Gurley it boosts his fantasy stock. Atlanta with Matt Ryan is a high-powered offense and their offensive line is a solid run-blocking unit. Pro Football Focus ranked them as the 11th best run-blocking unit last year despite injures to first-round guard Chris Lindstrom. Gurley will certainly have a chance to be the lead back with the only remaining backs on the team consisting of Brian Hill and Ito Smith. Looking back, Gurley saw his most success in 2017 and 2018 when he was running behind a good offensive line. Those Rams' offensive lines graded via PFF as the fifth and first highest at run blocking respectively. In 2019, Los Angeles Rams ranked 26th. That translated to Gurley averaging 14.6 fantasy points per game (14th) because of his 14 touchdowns scored. Gurley and David Montgomery were the only two running backs last season to rush for less than 1,000 yards despite having at least 223 carries.

Gurley also has the chance to see a return to his pass game usage in Atlanta. Matt Ryan is not a mobile quarterback so he will look to the running back frequently on dump-off passes. Also with the departure of Austin Hooper who owned an average depth of target of just under eight yards the past three seasons that creates an opportunity for Gurley to be that pass-catcher near the line of scrimmage. Freeman in 2019 had 66 total targets in just 13 games (five targets per game). He finished with 410 receiving yards and four receiving touchdowns. That would be a vast improvement from Gurley's pitiful receiving numbers in 2019: 31 catches for 207 yards and just two touchdowns.

With Gurley's pedigree, it will be his job to lose in Atlanta. I do expect that the Falcons will still address the running back position in the draft because Gurley's knee is a ticking time bomb and he is signed for just one season. They have no long-term commitment to him so they could just run him (or what is left) into the ground and have their rookie running back take over in 2021. The highest pick that general manager Thomas Dimitroff has used on a running back in his tenure with Atlanta was Tevin Coleman back in 2015. Coleman was an early third-round pick (73rd overall).

In dynasty fantasy football, I think if I am a contending team Gurley is a player that I am looking to target that has an RB2 floor with some RB1 upside if he finds himself scoring a bunch of touchdowns. Atlanta ranked fourth-last in rushing touchdowns a season ago, fifth-last in 2018, and 15th in 2017. However, with an ascending offensive line and the loss of Hooper in the red zone, more touchdowns could sway Gurley's way. The argument versus Gurley, however, is running backs have never thrived within a Dirk Koetter system in Atlanta.

Dirk Koetter from 2012-2014 and 2019 as the Falcons' offensive coordinator ranked 24th or worse in rushing yards and 21st or worse in yards per rush. The best season a running back had under Koetter in Atlanta was in 2012 when Michael Turner scored 12 touchdowns. It is worth noting that this was Turner's final season with Atlanta (age 30) and then in 2013-2014 it was Steven Jackson touting the rock from ages 30 and 31. Freeman was entering 28 age season, while Todd Gurley will be 26 in 2020 season. So though running backs have not thrived under Koetter most of them had been washed up before they had even arrived at Atlanta. I think Gurley still has another year of above-average usage.

Gurley 's injury concerns will always scare off some fantasy owners to influence his draft stock. Because of that, I am extremely comfortable acquiring him in fantasy drafts as an RB2. Through all the ups and downs of his career, he has never finished worse than RB20. On the surface, he is the lead running back on a high-powered offense that has a knack for scoring touchdowns and has upside in the passing game. Don't overthink this one.