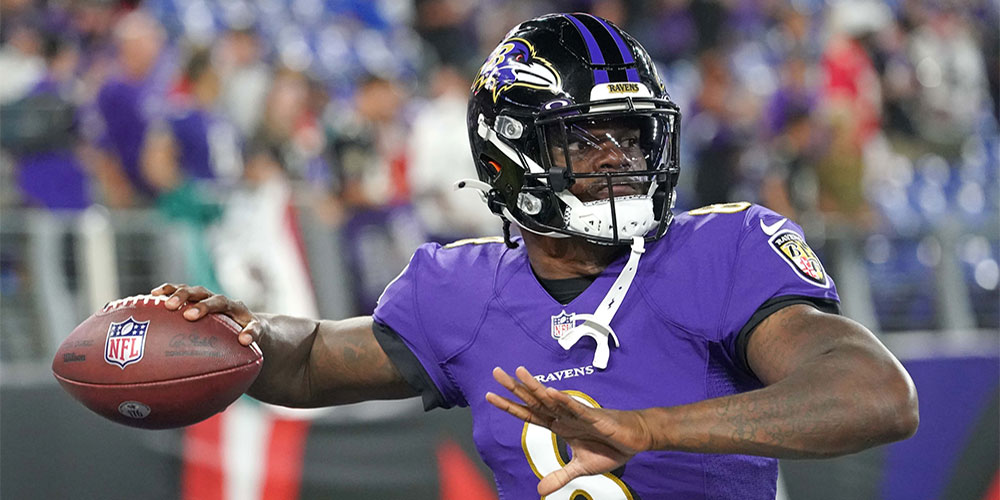 Week 5 of the NFL season will be capped off on Monday night with the 1-3 Indianapolis Colts headed to Baltimore to take on the 3-1 Ravens.

Baltimore is a 7-point home favorite in this game, which has an over/under of 46.

Baltimore has won three straight games after losing its season opener to the Las Vegas Raiders on another Monday Night Football game. Most recently, the Ravens beat the Denver Broncos 23-7.

The Colts, meanwhile, started off 0-3 before getting a 27-17 win last week over the Miami Dolphins.

It should make for an entertaining MNF game. There are plenty of solid options for daily fantasy, so here is a preview of some of the best plays on the DraftKings Showdown slate:

Sometimes the most obvious pick is the right pick. He's the most expensive option by $2,400 at the captain spot, but you are going to want to lock Lamar Jackson into your captain spot. Other viable options include Marquise Brown and Jonathan Taylor, but Jackson offers the most upside to go along with a very safe floor due to his rushing ability (he is the leading rusher for Baltimore this season).

Brown is the most logical receiver to pair with Lamar Jackson. He has 19 or more DK points in three of his four games this season. In the game he did not reach that benchmark, he dropped several wide-open passes that could have resulted in touchdowns and a massive game. He's receiving a healthy amount of targets as the No. 1 option in the passing game and has the ability to break a long play at any time with his speed.

Taylor is the lead back for the Colts, although he is spelled by Nyheim Hines at times and loses passing-downs work to Hines as well. However, Taylor is coming off a game in which he had 16 rushing attempts for 103 yards and a touchdown to go along with three catches (23.4 DK points). As long as he is getting touches, Taylor has proven to be a reliable running back. Because of Hines, Taylor may never get the 25-carry games, but he has enough ability to have a productive day on 15 or so carries.

Andrews has not put up massive numbers, but he has been pretty consistent so far this season. A safe option in the Ravens' passing attack, Andrews has at least five targets every game this season and is coming off two games in which he saw seven and eight targets. He went over 100 yards in Week 3, so he has the upside for a big game. He has not found the end zone yet, so if he does in this game, he will definitely pay off his salary.

Hines seems like a bargain at this price. He has been a bit inconsistent to start the season, alternating good and bad games through four contests. But when he is involved and the Colts are in catch-up mode, Hines generally produces good results. This is a game script that could see the Ravens get out to an early lead and the Colts might have to chase points. That is exactly the type of game that favors Hines. If you want to fade Jonathan Taylor and save a bunch of salary, this is the play.

Cox is coming off his best game of the season in which he found the end zone twice and racked up five targets in the passing game. He has to contend with others at his position like Jack Doyle, but the big-bodied, former basketball player is the best red-zone threat for the Colts. At his price, all you are looking for is a touchdown and he has shown that he can provide that given the opportunity.