The continued domination has been nothing short of amazing. Travis Kelce has finished as the TE1 in PPR every year since 2016. With Patrick Mahomes as his quarterback, Kelce could very easily continue the impressive streak and finish as the best tight end once again in 2020. Even if Kelce were to see a slight dip in production, there is little-to-no-doubt he would remain in the top-tier of tight ends. Kelce is masterfully impactful and greatly efficient. In 2019, among TEs, Kelce finished 1st across the board in targets (136), receptions (97), and yards (1,229). His 94.1% Snap Share ranked 2nd, a testament to his durability and consistency in Kansas City’s offense. Utilized in all areas of the field, Kelce thrives in big-play situations. He was 1st in Total Air Yards and Air Yards/Game and was tied for 1st in Red Zone targets. His 12.7 yards/reception was tied for 5th among TEs

Although George Kittle is inching closer to Kelce’s TE1 mantle, Kelce is an elite athlete with the capacity to post monster fantasy numbers each week. He has proven that he is the most reliable and consistent pass-catcher for the Chiefs, generating extra fantasy value with a gunslinger like Mahomes running the offense. Kelce should be the first tight end drafted in any type of fantasy draft. 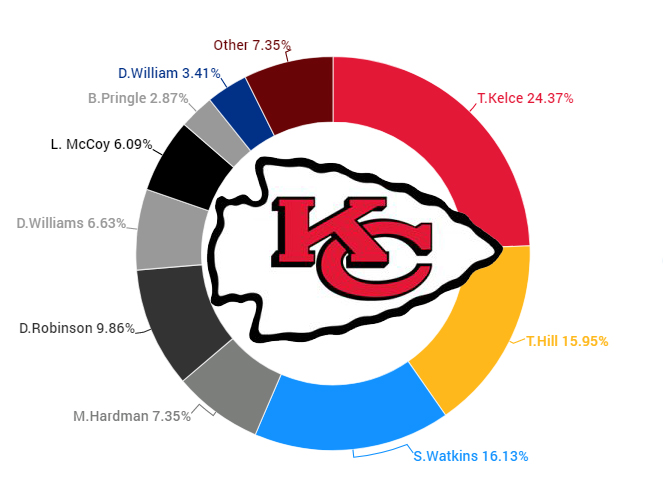 If any player is going to usurp Travis Kelce as the unquestioned top fantasy tight end, it will likely be George Kittle, who is already firmly entrenched with Kelce as the position's only Tier One options.

Despite missing two games in 2019, Kittle posted a second-consecutive season with 1000-plus receiving yards and five touchdowns. An ankle injury cost Kittle those two contests, but he's been remarkably tough while playing through a torn labrum that hasn't affected his play. Kittle also might have the best hands of any NFL tight end. He committed only one drop out of 107 targets last year, the fourth-lowest rate of any player that saw 100-plus targets.

Kittle also led all tight ends with a 4.2 yards per target figure and is a nightmare for smaller defensive backs to cover especially one-on-one. The 49ers added some solid depth to their receiving corps this offseason, which could actually help relieve some pressure off of Kittle. Entering the final year of his rookie deal, Kittle, who won't turn 27 until October, is about to break the bank with his next contract. Acquiring Kittle in fantasy will require an early-round investment but the advantages of having such elite production from a tight end position with almost no depth can pay huge dividends. 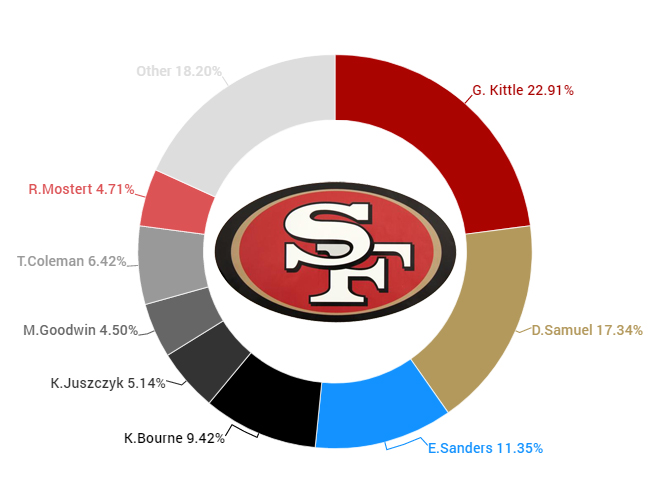 Mark Andrews broke onto the scene in 2020 as Lamar Jackson’s number one target. Andrews finished the season as the TE5, catching 64 of 98 targets, which ranked 5th and 7th, respectively. His 852 receiving yards ranked 5th among tight ends, while his 10 touchdowns were 1st among TEs. Andrews ranked 3rd in Total Air Yards and Air Yards/Reception, and 4th in Air Yards/Game. Andrews was 1st among TEs in End Zone targets with 12, highlighting his reliability as a pass-catcher and knack for getting into the end zone. Andrews was tied-4th in Contested Targets and his 13.3 yards/reception ranked 4th among TEs, while his 3.69 yards/target ranked 2nd. Andrews is a big-target, big-play tight end that carved out a productive role despite the Ravens’ low-volume passing numbers. If there is one bash on Andrews game was his 5 dropped balls last season, which was tied for 5th most among TEs. Andrews’ low snap share of 43.2% should increase significantly after the Ravens shopped their other young tight end, Hayden Hurst. Andrews proved to be a top-tier TE and will look to build on his impressive performance from last season. Although the Ravens heavily favor the run, Andrews is the most reliable and proven pass-catcher for the reigning NFL MVP, furthering Andrews’ fantasy value. Although Andrews might see a slight touchdown regression in 2020, he should remain the top-target for Jackson, cementing himself as a top-5 fantasy tight end. 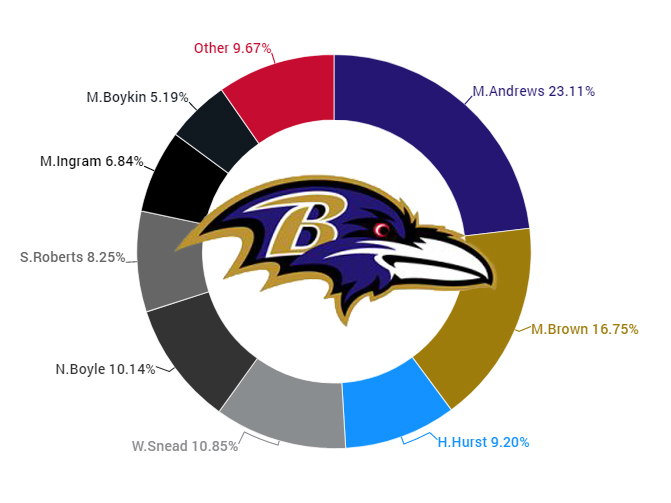 After a career year in 2018, Zach Ertz saw his numbers dip last season. Ertz still finished as a top-four fantasy tight end; however, many fantasy owners are starting to wonder if the 29-year-old Eagle's best days are behind him. The team was aggressive adding speed throughout the NFL draft to give Wentz more to work with, and if that wasn't enough, Dallas Goedert looks like he could be a starter on just about any other team in the league.

There is a good chance we could see Ert'z ADP drop this summer, making him a value pick considering the tight end position is so hard to come by. While there are more targets for Wentz in 2020, Ertz is one of Wentz's favorites. Ertz lead all Tight Ends in contested targets last season with 29, which was ten more than Darren Waller from the Raiders who was the runner up. The Eagles receiving unit was riddled with injuries last season, and the TE's and RB's were left to try to pick up the slack.

There is a strong argument to be made that Ertz will see fewer targets in 2020, but the quality of those targets may be what's the most important. In a post-NFL Draft interview, Eagles GM Howie Roseman mentioned something interesting that may hint to the strategy of the team this season. He spoke specifically about the season opener last year against the Redskins. On both of the Eagles the big plays down the field to DeSean Jackson (his only game), Zach Ertz was wide open in the middle of the field. Adding speed to take the top off of defenses seems to be the plan for the Birds in 2020, which could allow Ertz more breathing room and more opportunity for fantasy production this season. 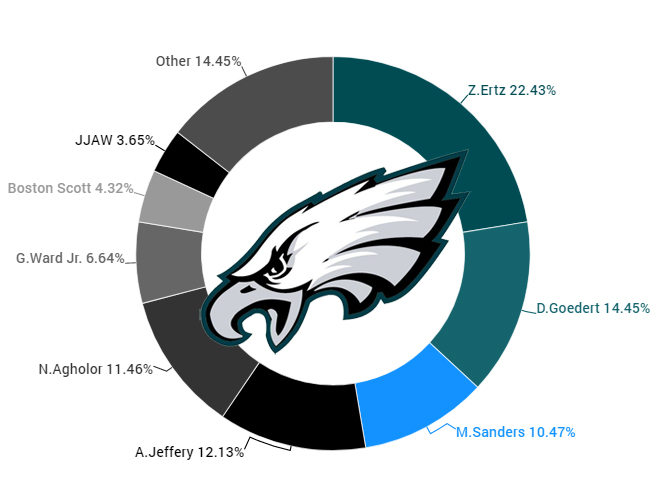 The presence of Mark Andrews necessitated the Baltimore Ravens sending their 2018 first-round pick to Atlanta, where the Falcons get an instant, high-quality starter to replace Austin Hooper, who broke the bank in free agency. The Falcons should once again be one of the most pass-happy teams in the NFL, which is great news for Hurst, who will finally get his first chance to log full-time snaps.

Hurst has a chance to immediately contend for elite fantasy numbers on the sheer volume of targets he should command. While the Falcons also boast Todd Gurley, Julio Jones, and Calvin Ridley, Hurst is likely to see lesser coverage. Hooper averaged 93 targets per year since 2018 for Atlanta and that includes missing three games last season.

Even with that three-game absence, Hooper finished fourth among all NFL tight ends with 18 red-zone targets in 2019- only one behind Travis Kelce, Zach Ertz, and Tyler Higbee. Athletically, Hurst has definitely shined in his limited opportunities and if he can quickly acclimate himself to a new offense, he's got a real chance at being a top-five fantasy option and a must-have sleeper in 2020 drafts. 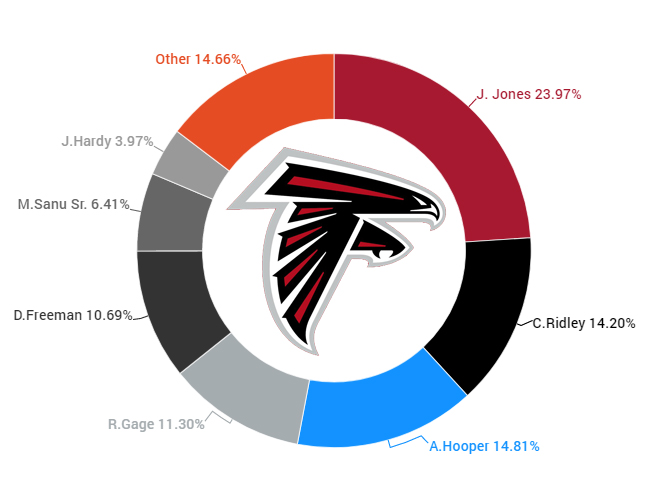 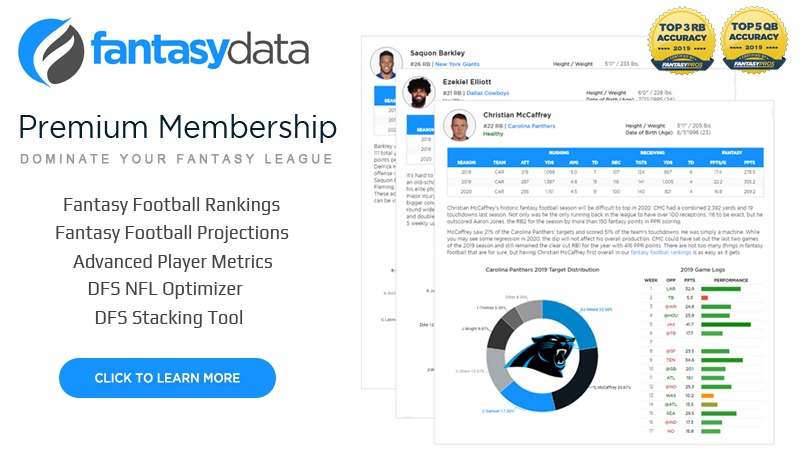